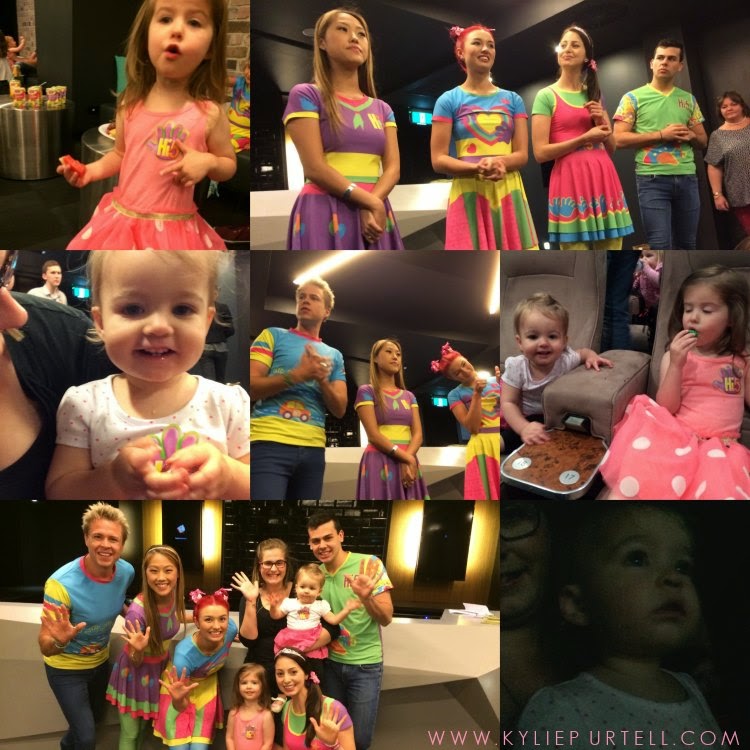 Yesterday the girls and I were lucky enough to be invited to meet the members of Hi-5 and have a private screening of the first episode of their 15th television series. Yeah, 15 years! Doesn't that make you feel old! I still remember performing at Schools Spectaculars with Nathan Foley, one of the original Hi-5 members and running in to others through friends in my first few years out of high school. So let's just pretend I never mentioned the whole 15 years thing, shall we!

The meet & greet & screening was held in Pyrmont and I think the girls were really impressed by a couple of things. The fruit platter. And the giant screen. They seemed rather uninterested in our boring old standard size TV and bananas when we got home at any rate! Punky also told me she loved the popcorn while we were watching the show! She did say she enjoyed the show too, so that's something at least. 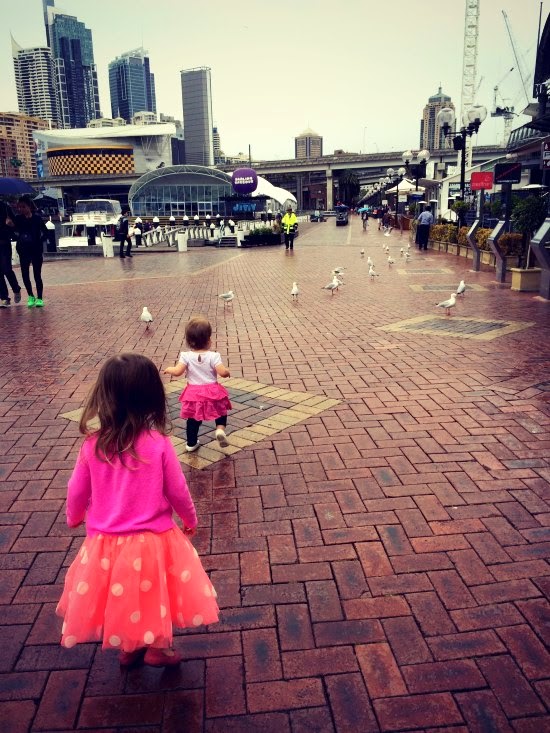 After the event we walked down to Darling Harbour, as I promised Punky that we could go and have a look at the water once it was all done. I can't tell you how many times she proclaimed "It's so bootiful, Mummy!" about the water. It was one of those moments that really struck me. It was sprinkling and the sky was grey and dull. The water was also a very dull shade of green and full of floating debris from the recent storms and wind. And yet the minute she laid eyes on it she couldn't stop talking about how beautiful it was. If that's not a lesson in looking at the world through the eyes of a child and appreciation then I don't know what is!

Zee was most impressed by the seagulls (or ducks as Punky called them!) and set about trying to catch one in her fat little fingers. For some reason though she just couldn't quite get them and I'm not sure who was more relieved, the birds or me! There were a few tricky moments when I had to make a choice between racing after Zee or heading towards Punky. It certainly is a real balancing act when you have more than one walking child! I don't know how people with more do it without leads! 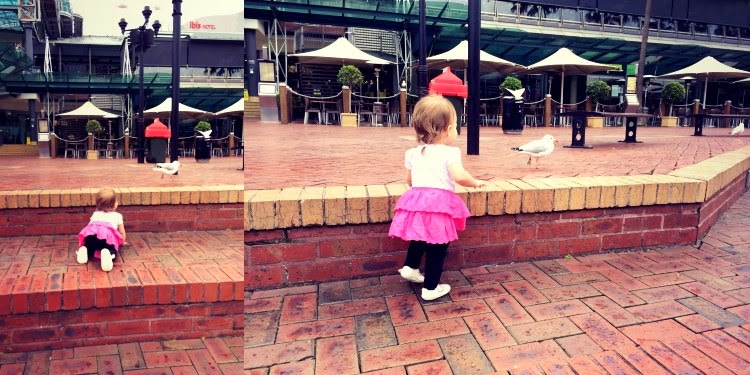 After the water admiring and seagull chasing we made a quick pitstop in the baby change room for fresh nappies and a much needed 5 minute break. For me, not the kids. They were quite content to play with the toy thing on the wall which was more than fine by me after all of the toddler chasing. Once their fascination with the toy thing was over we headed out to the Harbourside food court for some lunch.

Lunch usually isn't all that exciting with toddlers, they eat the same thing wherever you go (sandwiches or "chippies nuggies"!) but I got one of the best lunches I've had in a while. It was honey-roasted pulled pork on a roll with cucumber, lettuce, pickled carrot, spanish onion, chilli and some kind of creamy sweet-chilli sauce thing and it was divine. I've told Dave we have to take the girls in to the city again soon just so he can taste it's porkalicious goodness for himself!

We just love a good porking! 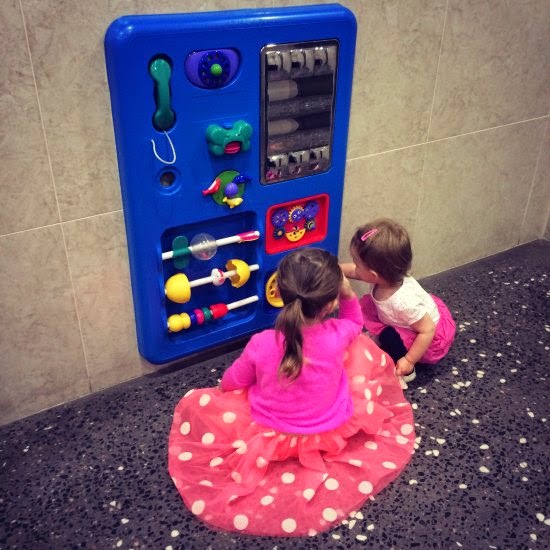 With lunch done we grabbed Mumma a well-deserved coffee and trecked back to the car, where I was unceremoniously bought back down to earth by the stinkiest Zee I've encountered for a while and an awkward front-seat nappy change which I am still feeling in my back. Thankfully after that we were good to go, and my ploy to take the long (toll-free) way home worked and both girls zonked it for the hour-plus drive home.

Punky is now plastered in Hi-5 temporary tattoos that she got in her super-cool Hi-5 backpack, with plans to take the remaining tattoos to Granny's this afternoon and 'pretty' her up! I must thank you Hi-5 PR people for the awesome bags. You have totally saved me having to buy the girls new backpacks at the start of next year. 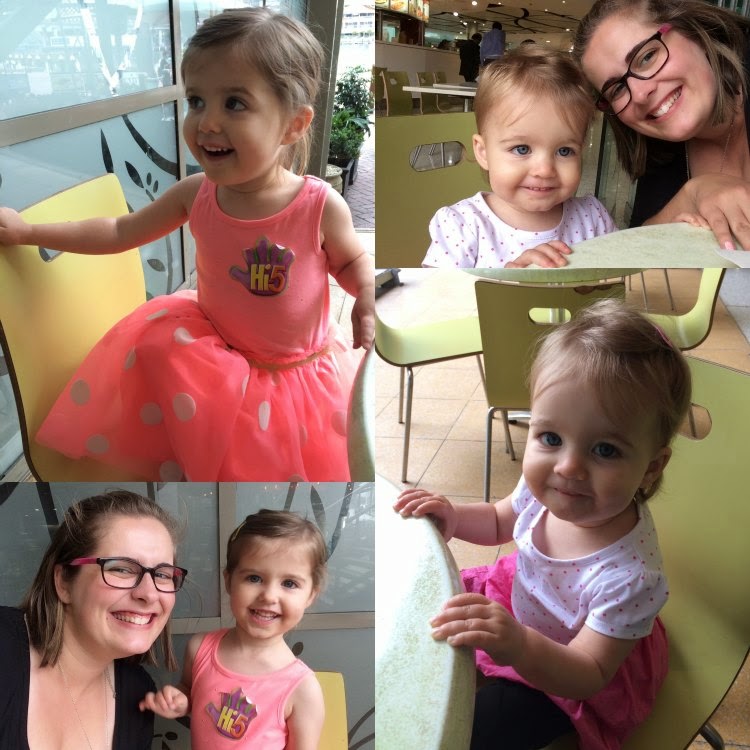 Once again I survived a pretty big outing with both kids by myself, and every time it happens I feel a little less of a fraud. For so long I've avoided doing much with the girls by myself because I worry about how I will handle it, but each time I do it becomes that little bit easier. I also realise just how much fun it can be hanging out with these two little souls who really are the biggest hams I've ever met in my life. They make my life what it is.

How long did it take you to get the nerve to go on big solo trips with your kid/kids? And if you have more than two, do you have any of them on a lead?!

Disclaimer: This is not a sponsored post. The girls were invited by the Hi-5 PR company and there was absolutely no obligation to blog about it, although I'm sure they'll be happy that I did, lol! Either way, I have not been paid for this post and all opinions are my own. As always.

Kylie Purtell said…
I had three under three but the baby was ten weeks premmie, it was around her 3 month mark that I first ventured out to do the grocery shopping of all things. I didn't really give the whole plan enough thought, I just knew we needed to shop and hubby was already doing so much. I had bubs in the pouch, Miss 1 in the trolley seat and Miss 2 almost 3 walking and holding my skirt. All was going well, until we arrived at the checkout and I struggled to get my groceries out with the pouch on. I was very grateful for the manager that stepped in and helped me not only through the checkout but to the car. I'm pretty sure I started online shopping after this.
15 October 2014 at 05:14

Kylie Purtell said…
Wow - how exciting for the girls to meet the Hi 5 crew! They look a bit different to the originals from when my kids were little (my youngest is now 19!). There's nothing lovelier than seeing your kids happy and having a fun time :-) BTW - I know how you feel about going out alone with the kids. My first baby was twin boys - it was a confronting exercise going anywhere with those two particularly when they got a bit older and on the move! xo
15 October 2014 at 08:43

Kylie Purtell said…
Will it surprise you to know that leads did not work on the big 2!! I have never seen something so simple turn into something so complicated in all my life!! They both have managed to twist and turn themselves and end up nearly choking on the cord!!
Gorgeous girls they are!! It will get easier!!
15 October 2014 at 09:12

Kylie Purtell said…
It looks like you had a great time!! We received the invite, but didn't go. I would have had to do the solo trip with Cherub. I am not keen on the idea of driving in the city (yikes!) or catching the train by myself with her, she still doesn't listen very well. One day.... :)
15 October 2014 at 10:14

Kylie Purtell said…
It was lovely to see you again yesterday Kylie! Your girls are gorgeous and growing up so fast. So pleased you enjoyed your outing with them afterwards. I have to confess I still struggle at times with my three solo but I have perfected going to our local cafe and a couple of other regular trips with them. It's just so hard when they all want to go in different directions and look at different things!!!!
15 October 2014 at 13:04

Kylie Purtell said…
It can be so nerve wrecking with two of them! I just bring out my best bribes for the big one and tell her that she needs to be my helper with her brother. It's the easiest way to do it.
15 October 2014 at 13:35

Kylie Purtell said…
What a fun day you had. I always get a bit anxious taking my two out alone. I do love that sense of accomplishment.

Kylie Purtell said…
Looks like great fun. I was invited too but Tuesdays are my kid free day and I just couldn't give that up for Hi-5, lol. My kids love Darling Harbour though, there is so much to do there isn't there? Was the big duck still in the water??
15 October 2014 at 16:22

Kylie Purtell said…
Wow what a great honour that must have been! My oldest used to love Hi-5! Makes me miss Sydney seeing these photos x
15 October 2014 at 17:29

Kylie Purtell said…
Oh wow what a fabulous day your children must have had. great photos.
15 October 2014 at 18:01

Kylie Purtell said…
I love Darling Harbour - there is one food place we go to every time because they make the most yummiest sandwiches ever.
Gosh I never realised that Hi-5 has been around for that long...my older boys used to love watching it when they were younger...time sure flys by far too fast.
Glad you had a great day out - and yes we used a "Monkey" harness for our youngest son {who is now 9 years old but we still manage to lose him when out and about} when he was a toddler cause he used to take off so many time.
15 October 2014 at 19:27

Kylie Purtell said…
Punky looks so grown up!
They are the worst nappy changes, the pooey one on the car seat, specially when you have to leave it in the car so the flavours meld because there is no bin in sight! A car seat is only so big and they like to wriggle so much.
15 October 2014 at 20:51

Kylie Purtell said…
Well done you! I'm a real scaredy cat when it comes to going on big adventures with the girls by myself. We usually keep it fairly local. I've been invited to a PR event tomorrow. Kids are encouraged to attend, but I'm just taking my eldest with me. My youngest is going through the terrible twos big time, so I decided not to take her. Turns out she's sick, so I wouldn't have been able to take her anyway. Love Punky's outfit.
16 October 2014 at 21:26