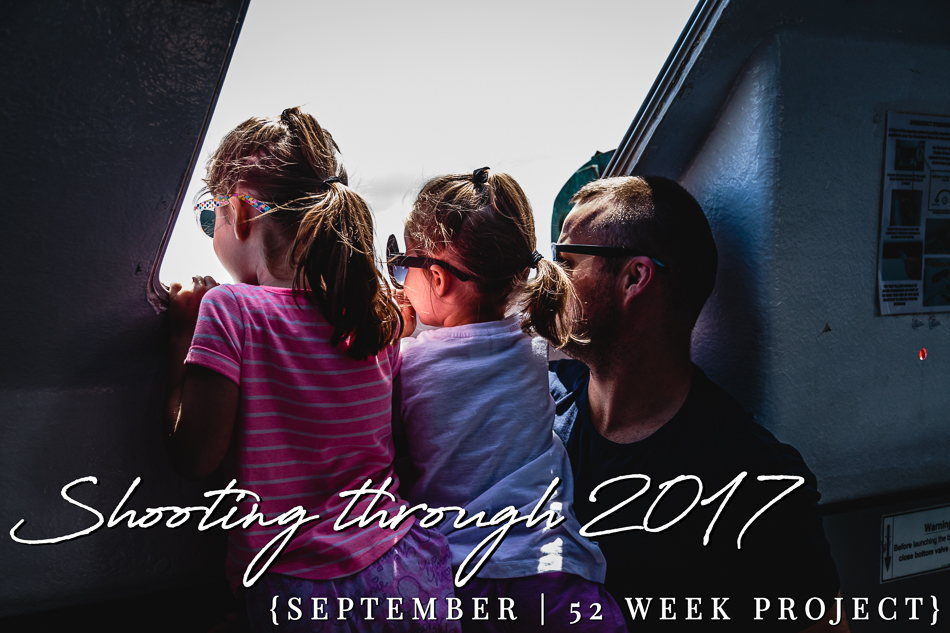 I feel like I say this every month (probably because I do!) but man, where has this year gone! My mind just cannot compute the fact that it's October. Probably because we were away cruising on the Carnival Spirit for 2 weeks in September, I feel like September didn't really happen. It's like holiday time exists in its own magical dimension and time in the outside world ceases to exist while you're within that dimension. And so it is with a shock when you leave that magical dimension and rejoin the outside the world, time seems to have jumped forward.

Aside from our holiday, September was a big month for another reason, and that was because the girls got their first real haircuts (fringe trims by Dad do not count!). I thought at first there would be resistance to this but they were surprisingly keen for it, and I gotta say, particularly in Zee's case, I wish we'd done it sooner. The bob is beyond cute on her!

As you can you imagine, half of the photos in this post will be from our holiday, seeing as we did spend two weeks out of the four cruising. Before I get into the photos though, I just wanted to share a little for those with an interest in photography. Feel free to skip to the pretty pictures if reading technical stuff about photography isn't your thing!


Normally, when I shoot my own family and other people's, I exclusively shoot with a 35mm lens. I have a Sigma Art series version of the 35mm and I basically love it, it rarely leaves my camera. However, when I was deciding what gear to take away with us, I was really conscious of the fact that my insurance on that lens isn't covered when outside of Australia (nor is my main camera body, a Canon 5D Mark III). So I made the decision, seeing as those two pieces of equipment are crucial to me making a livelihood, to leave them at home.

Instead, I took my back-up camera body (a Canon 6D) and my Canon 24-105mm f/4 lens, as well as my nifty 50 (Canon 50mm f1.4). My reasoning was that the 50mm would be good for low-light areas inside the ship because of it's wider maximum aperture, meaning I could get more light without having to compromise on my shutter speed or ISO too much. I could then use the versatility of the zoom lens from wide to telephoto (24-105mm) to shoot outdoors and on the islands where having an aperture setting more narrow than f/4 wouldn't matter so much because it would be during the day, mostly in full sun (meaning plenty of light!) and I'd be able to get closer to things without having to physically move my body if need be.

Having spent so long mostly shooting on the 35mm lens, I wasn't prepared for how close up I would be when shooting with the 50mm. I forgot how far away you had to be from things in order to get any kind of environmental context to the images. I also forgot how lovely the 24-105mm lens could be when shooting fully-zoomed in at 105mm. As a result of being pushed outside of my normal shooting comfort zone, I was forced to look at scenes in new and different ways and I think it's made me a lot more conscious of how I'm shooting since I've gotten back. In fact, I've made a point of mostly shooting with the 24-105mm lens to force me out of a creative rut and find new ways fo documenting our world.

So aside from just being an awesomely great holiday and coming back relax, I've also come back creatively challenged and looking to push myself further in how I shoot which is a massive win in my creative book!

Now with the photographic ramblings out of the way, let's get to this month's 52 week portrait pictures... 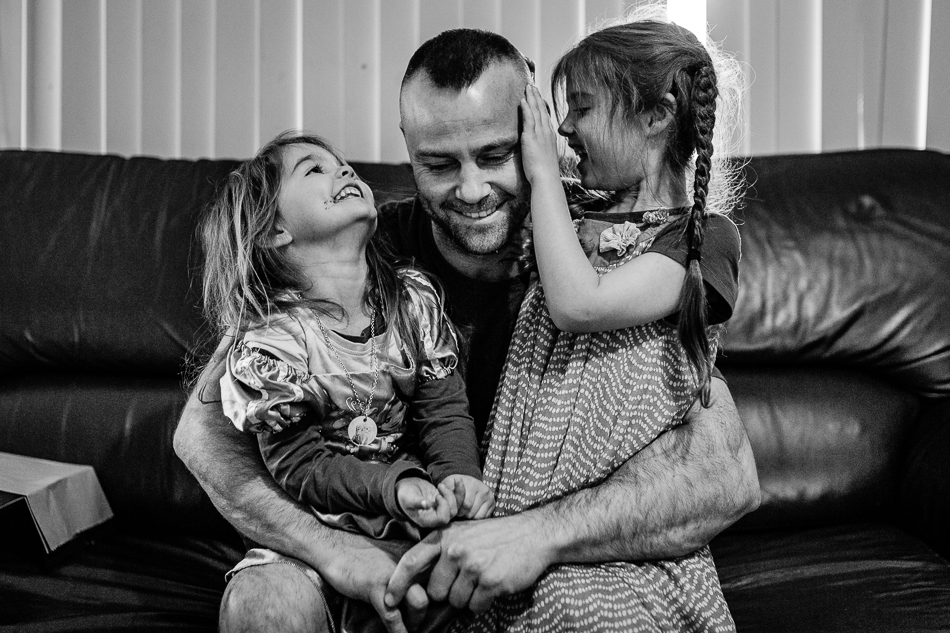 SISTERS ~ WEEK 36 ~ Father's Day 2017. They're Daddy is ruining them for any other men that may come in to their lives down the track by being so darn fantastic! 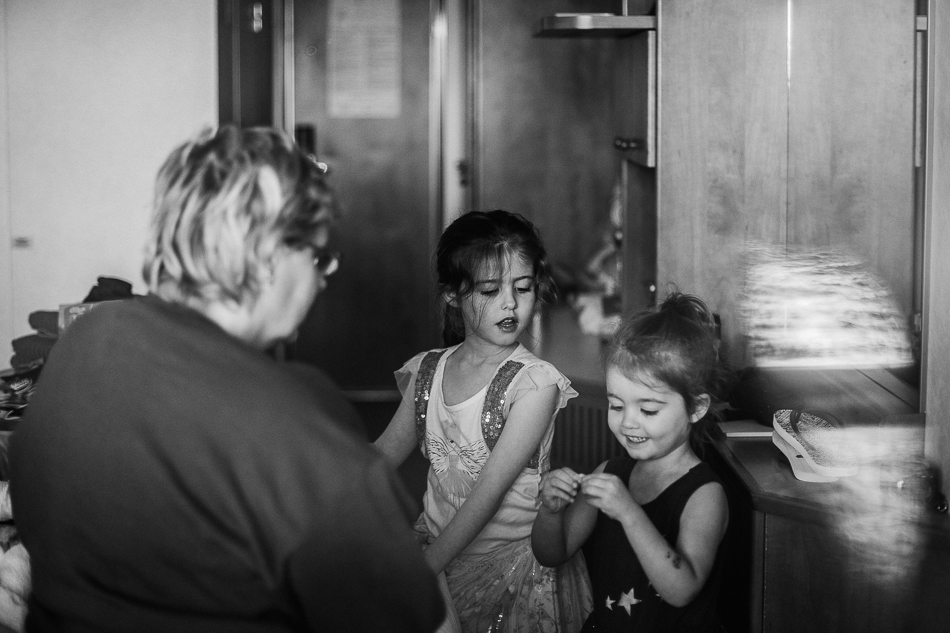 SISTERS ~ WEEK 37 ~ Hanging out in Grandma's cabin on the Carnival Spirit after going to the Build-a-Bear workshop, Zee is explaining how the bears were put together (I shot this one through the glass door from outside the cabin on the balcony) 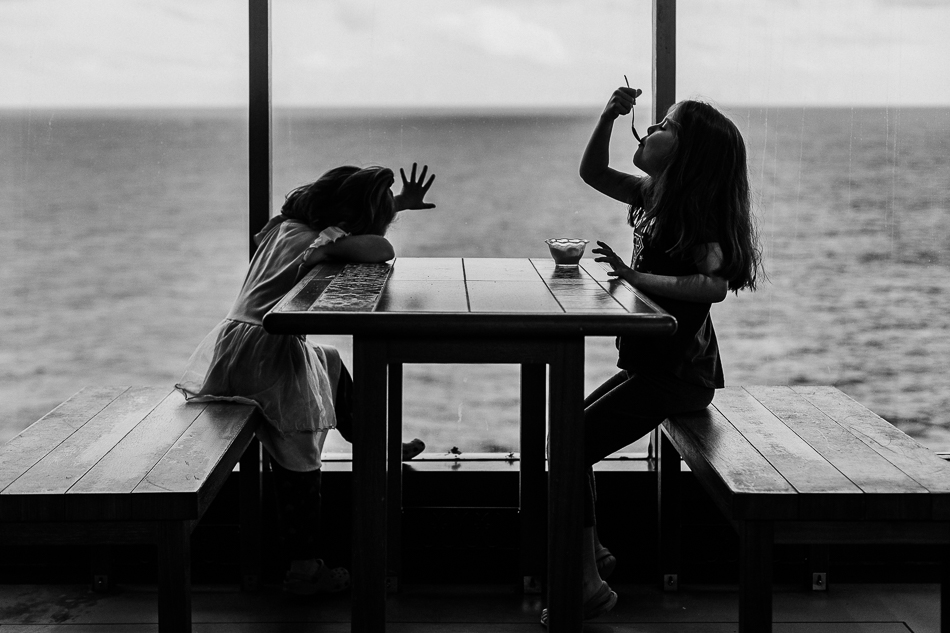 SISTERS ~ WEEK 38 ~ In case you missed it, the Carnival Spirit has all-you-can-eat, 24-hour ice cream on board. This pretty much made Punky's life! 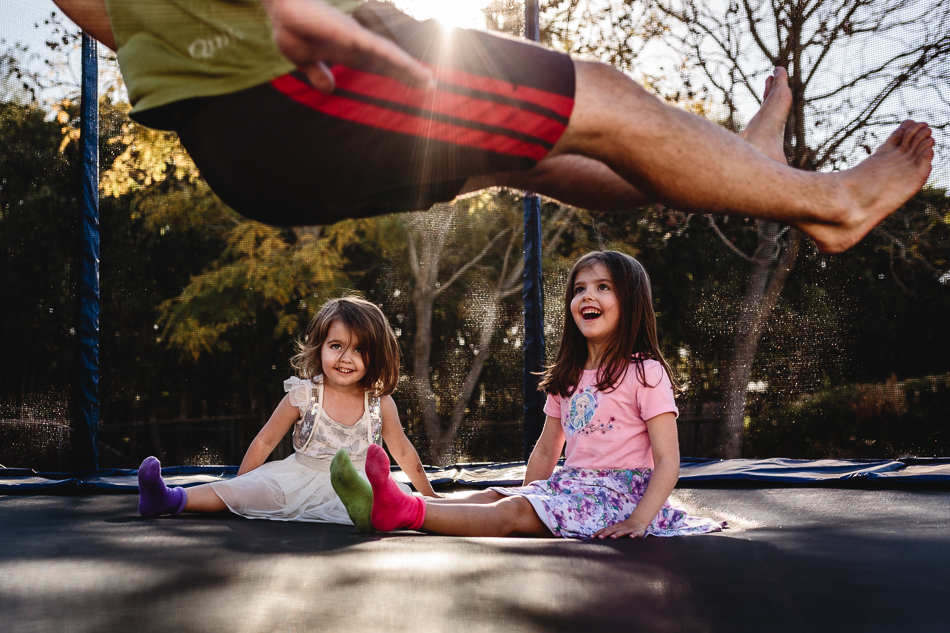 SISTERS ~ WEEK 39 ~ Back home again and they could not wait to get outside and on the trampoline. This image is one I have been trying to capture for a while. I really wanted to not only catch the looks of anticipation on their faces, but also have Dave in the frame so it was apparent from one glance exactly what was going on. And I finally got it! 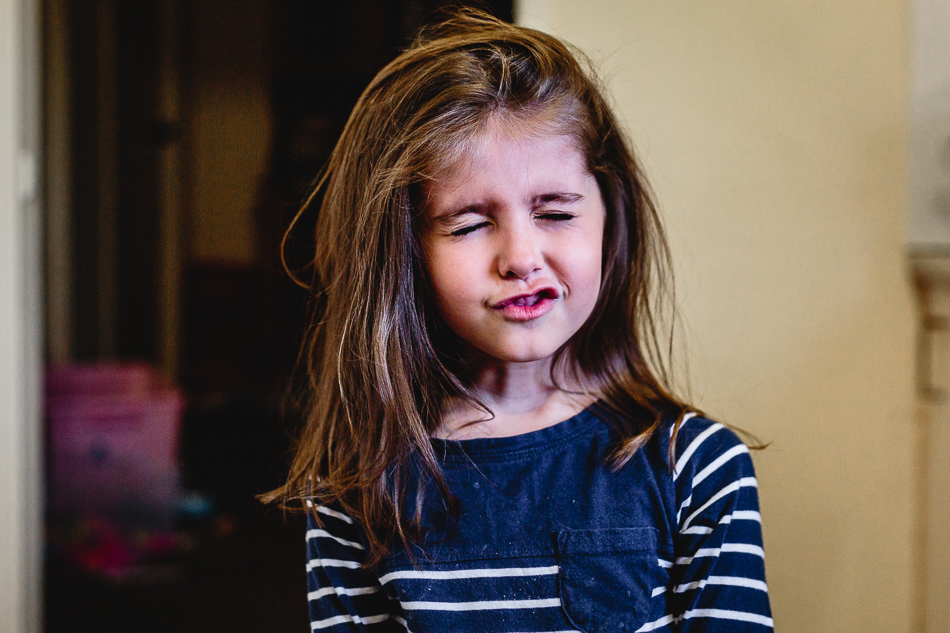 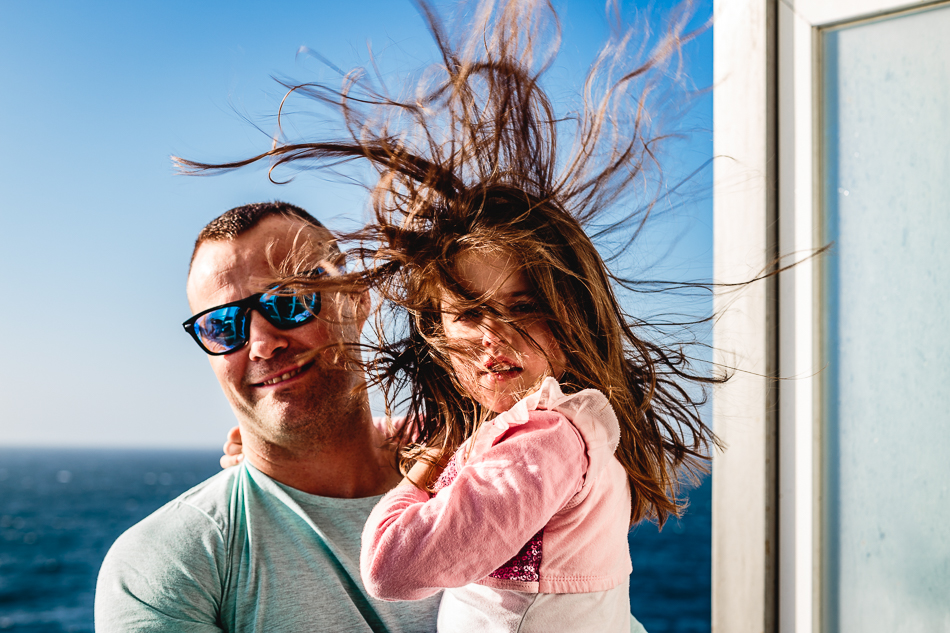 PUNKY ~ WEEK 37 ~ The day I became really grateful for her first haircut! Can you imagine trying to comb out the knots from that windswept hair if it was still three times this length?! Thankfully her shorter hair made the job so much easier! This shot was taken on the balcony of my sister's cabin. 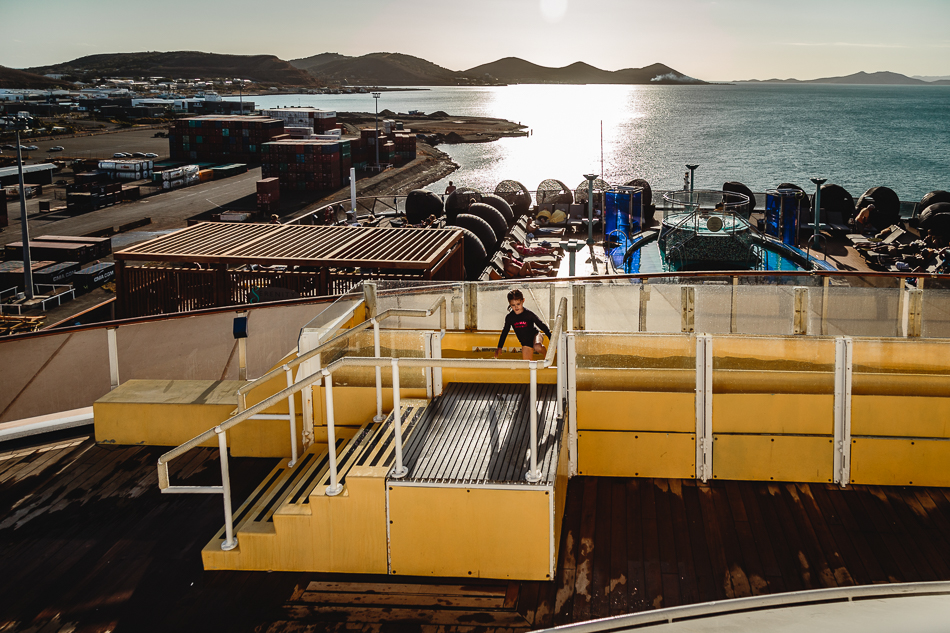 PUNKY ~ WEEK 38 ~ Another unexpected thing about our trip was that it made me realise just how grown up Punky is getting. She's not my little baby anymore! The yellow waterslide was pretty big and she absolutely loved it and went on it time after time after time. Watching her walk around the top deck like she owned the place, I started to get a glimpse of the capable young lady she's growing up to be. 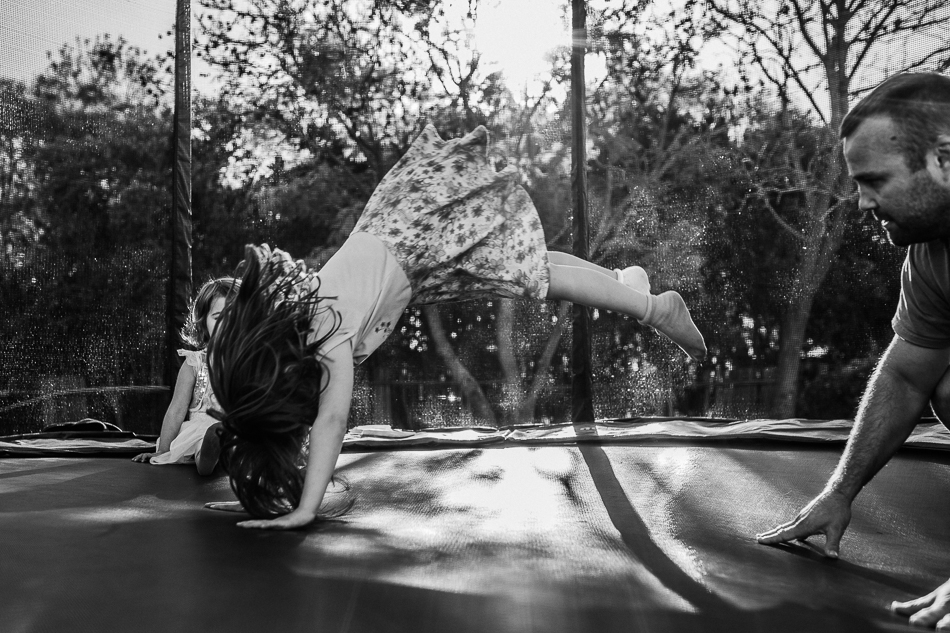 PUNKY ~ WEEK 39 ~ She has been practising her jumping tumble rolls but hasn't quite got the hang of it yet. She's only allowed to do it when Dave is there on the trampoline with her so he can watch her closely and coach her to make sure she doesn't hurt her neck. She's almost got it though! 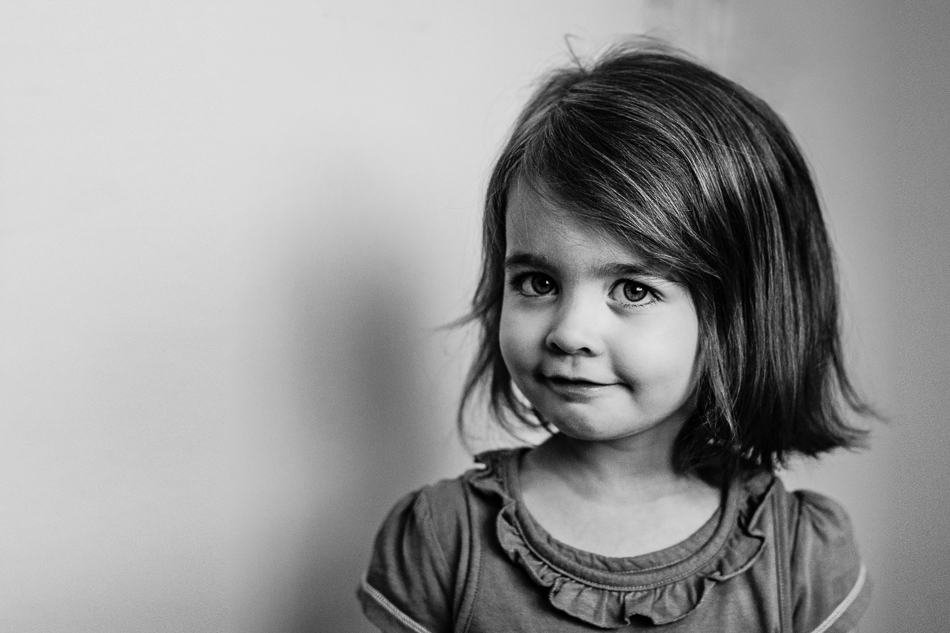 ZEE ~ WEEK 36 ~ Seriously, this kid's hair was made for the bob. So was her stinkin' cute face! 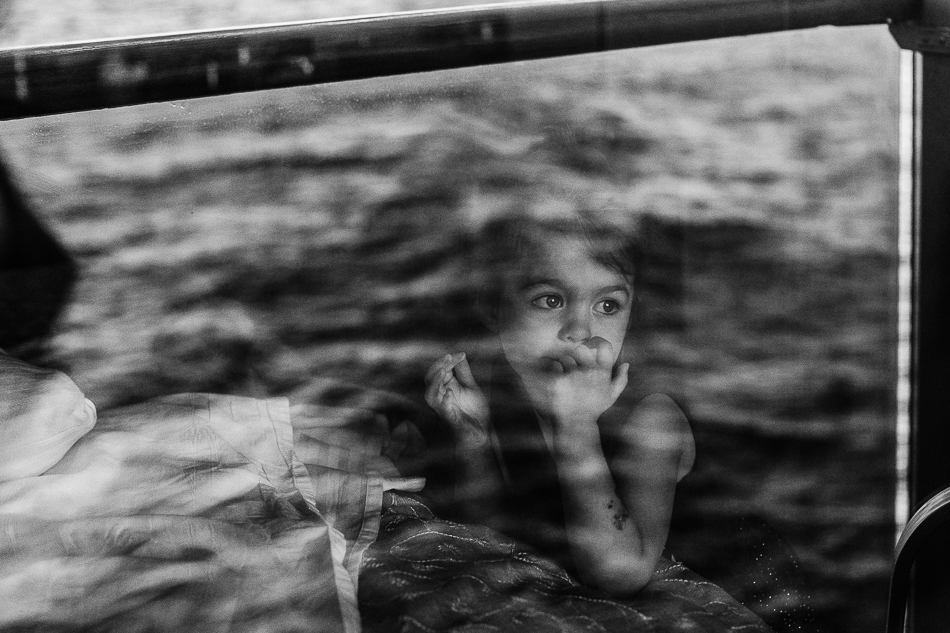 ZEE ~ WEEK 37 ~ She's always been a bit of a dreamer, I often catch her staring off into space thinking about things or just watching the world go by, so when we had downtime on the ship she was in her world-observing element! (Another shot taken from outside on the balcony, looking through the glass door) 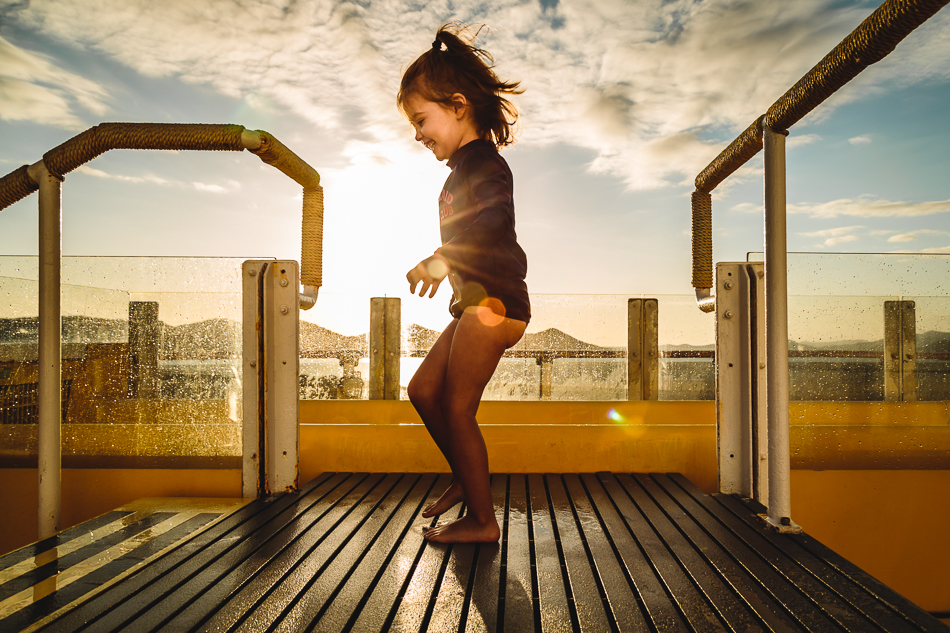 ZEE ~ WEEK 38 ~ This image is my single most favourite one from the whole two weeks (aside from the ice-cream eating B&W shot above) and I am going to get it blown up and printed really big! Aside from having that gorgeous golden hour light, it represents the way I feel about Zee... she's really is my little ray of sunshine! 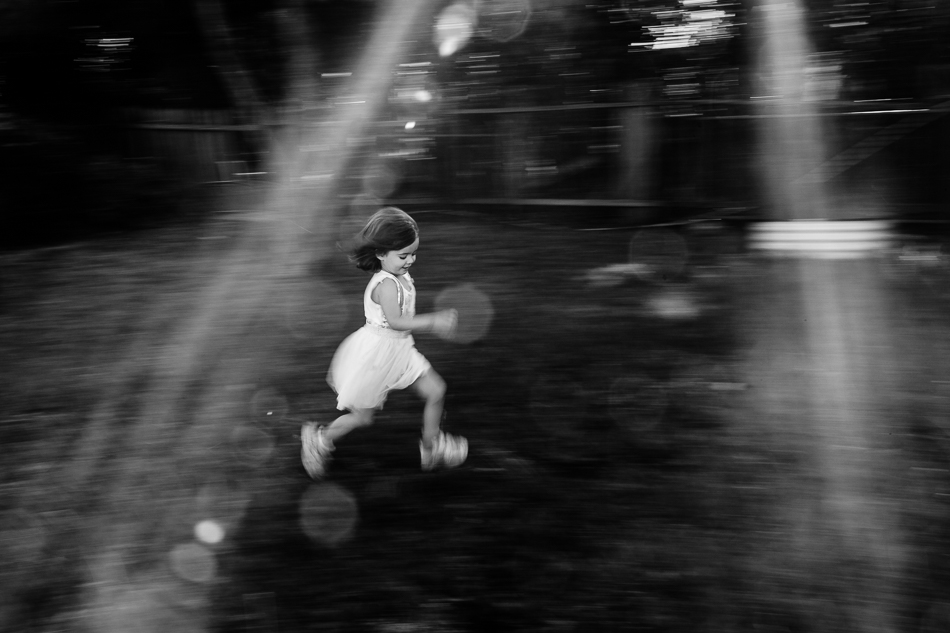 ZEE ~ WEEK 39 ~ When she saw this photo she said to me "Wow, Mummy, I run really fast". Yes, sweetheart you do. As fast an uncoordinated turtle running backwards through peanut butter!


Did you take many photos in September? Have you been doing any photo challenges or projects? Which is your favourite portrait above?