Cruise with me baby {on the Carnival Spirit} | Travels 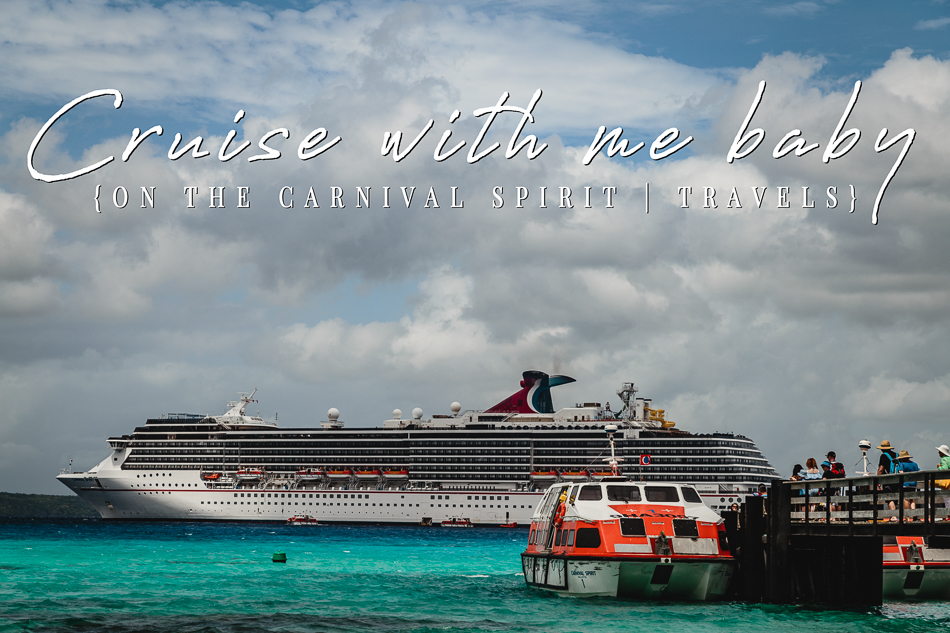 The worst thing about going on holidays is that they have to end. And they go so fast.

When you're preparing and packing it feels like it will take a lifetime to get ready. No matter how long you're going away for, you can't imagine the end of your holiday. And then suddenly, the day of departure arrives, and then just as suddenly, it's time to head home.

And so it was with our 10 night cruise. The lead-up to the cruise and all the packing and getting ready seemed to take forever! It felt like we would never actually step foot on that big boat. But step foot we did, and boy oh boy, did the holiday go waaaaay too quickly!


We've been home for a few days now and sadly it feels like we never left. The rocking of the boat, the crystal clear blue waters of the islands, the endless cocktails are but a distant memory, and the reality of having to deal with ratty kids and making dinner (not to mention every other meal) every night has well and truly set in!

Despite being home for 3 days I feel like I've barely had a moment to sit and think. The end of holiday denial has been solid, and so Dave and I have spent the last few days trying to ignore the fact that we are not still on holidays, and enjoy the last few days before he goes back to work and normal life well and truly resumes.

I have so much to share from our holiday, but I thought today I would share 10 of my favourite images and the little memories that go along with them. Hopefully they won't fill you with too much wanderlust! 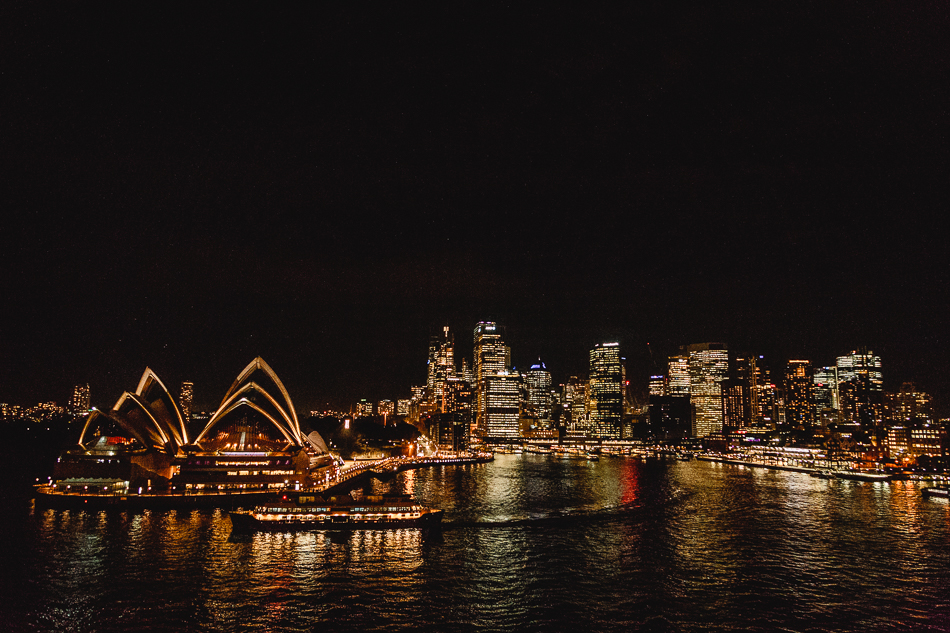 We are so lucky to live in one of the most beautiful cities in the world, Sydney. I've spoken to a lot of people who are well traveled, and the consensus is mutual, Sydney has one of the very best and most beautiful harbours in the world. I've lived my life in Sydney, but seeing my beautiful city from the deck of a giant ship at night was a real thrill on the night we started our cruise. 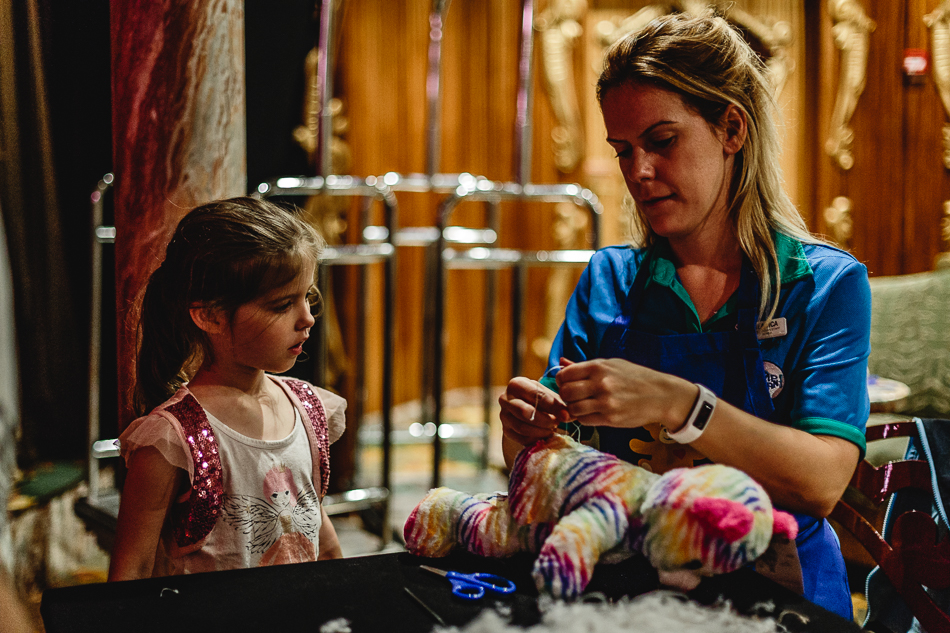 There is seriously so much to do onboard. I was worried that we might get bored on the all the sea days but my worry was unfounded. From trivia and games and discos to shows and Build-a-Bear workshops, there was something for everyone. The girls loved being able to make their very own bear souvenirs onboard, and my siblings and I got a real kick out of all the trivia comps! 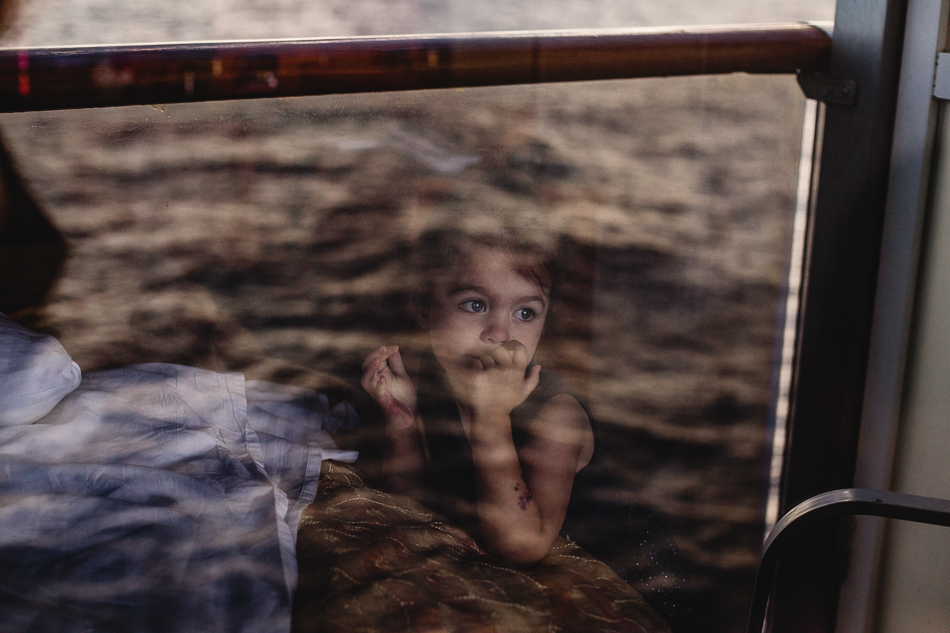 Dave, the girls and I were really lucky to not suffer from any sea sickness while on the ship. The movement did take a bit of getting used to, and it was certainly a new experience falling asleep in a bed that was constantly moving (honestly, the movement was kinda like when you go to bed after having too much to drink and the room keeps moving, only you're not drunk! It's very weird the first couple of nights!) but overall it didn't really bother us. I can't say the same for everyone else on board, but for us, the amazing views, activities and the best crew in the world certainly made up for any weirdness. 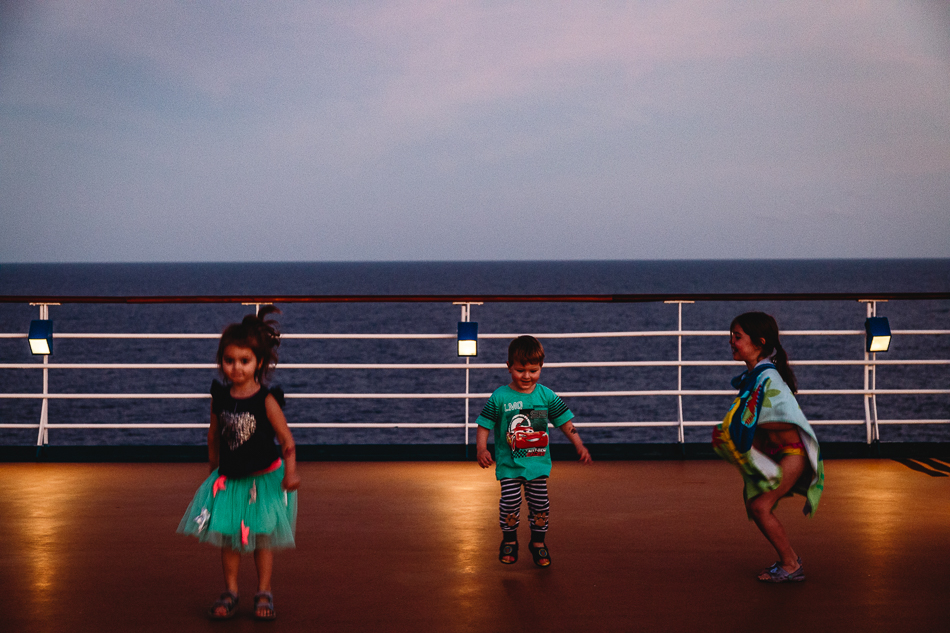 One of the best things about the cruise was simply getting to spend 11 whole days with my family. The day after we got back we were all messaging each other and my sister said that she was "family sick. Like being home sick but for family". And it's so true. It was also really awesome for the girls to get to spend so much time with their cousin Bear and while he might be too young to remember it, I know the girls will look back on getting to spend so much time with their cousin fondly. 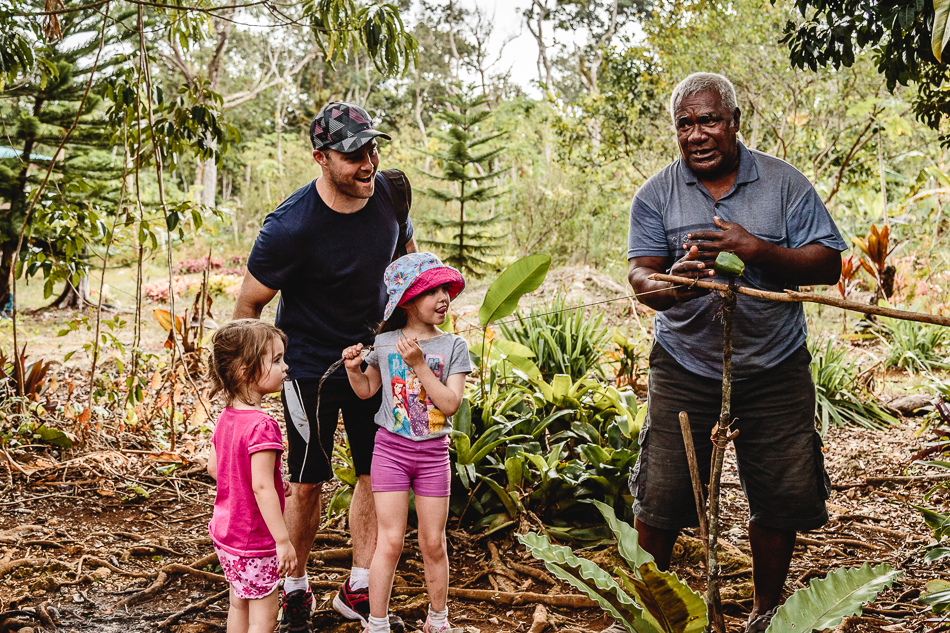 The first island we visited was Lifou, and while we were there we did a Forest & Secret Grotto Discovery tour. Basically, we were driven to the Lifou forest and taken on a guided walk and shown the difference plants & trees that are traditionally used in Melanesian culture for everything from food to building to medicine. We also got to visit a cave full of stalagmites & stalactites, and learn traditionalitionl Melanesian hunting techniques. In the image above, Punky is having a turn at catching a "bird"! They LOVED it! 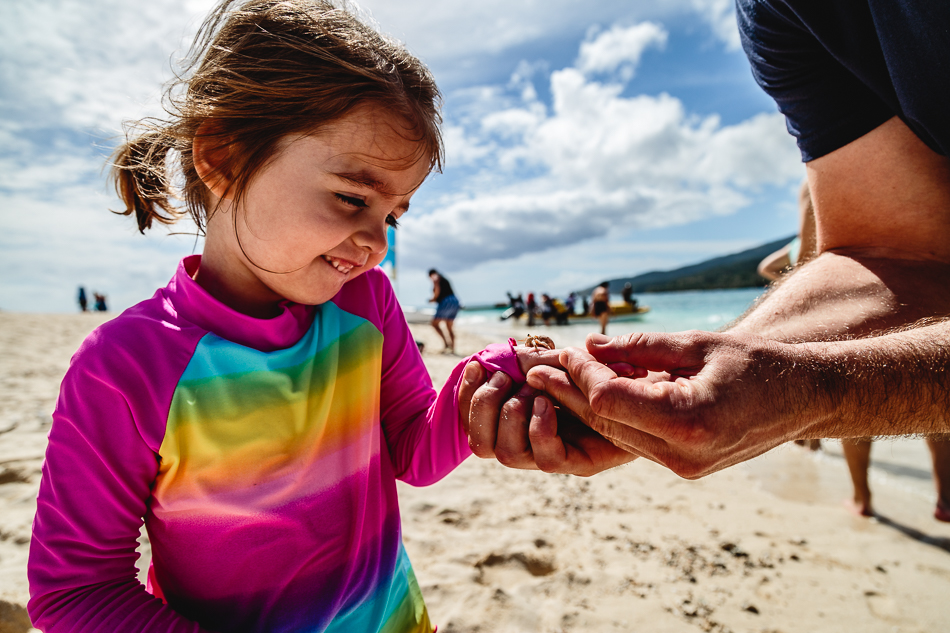 The beaches on Mystery Island and Mare are some of the most beautiful I've seen, and the girls absolutely adored being able to swim in the beautiful, clear water. Due to a perforated eardrum (thanks to an ear infection I developed after getting a respiratory infection!) I wasn't allowed to swim, and while that did suck I still enjoyed watching the girls enjoy themselves, and they were lucky to have so many aunties & uncles on hand to make sure they got the most out of the water. Funny story.... while on Mystery Island, Dave and Zee spent quite a bit of time finding hermit crabs. Hermit crabs are generally pretty docile creatures, however, one feisty specimen took umbrage at Zee picking him up and grabbed onto her hand with his claws, leaving two little cuts. We all thought it was hilarious, Zee and the hermit crab not so much! 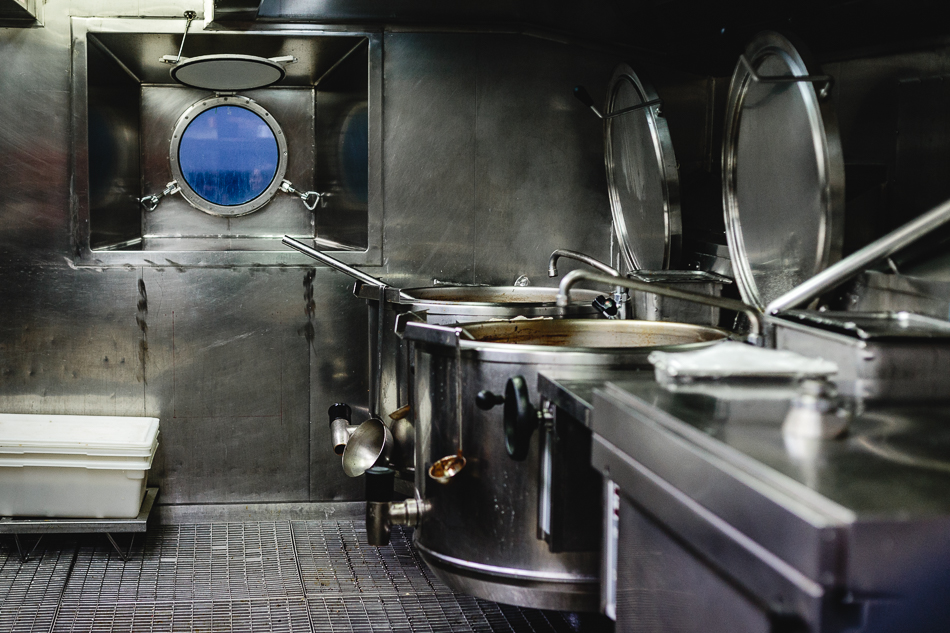 The food. The food was AMAZING! There was so much of it. And the fact that we could eat whenever we wanted, and almost whatever we wanted was amazing. Between the all-you-can-eat ice cream and 24-hour pizza, we were well & truly stuffed! Let's just say by the end of the 11 days some of the new shirts & shorts Dave bought for the trip were feeling more than a little snug! There was so much in the culinary way that I'm going to dedicate an entire post to it, because apart from just the every day food there were a few special things that we did that deserve a post all of their own (the image above was taken in the ships main galley during a special tour that Dave and I did. Have you ever seen such a big ladle?!). 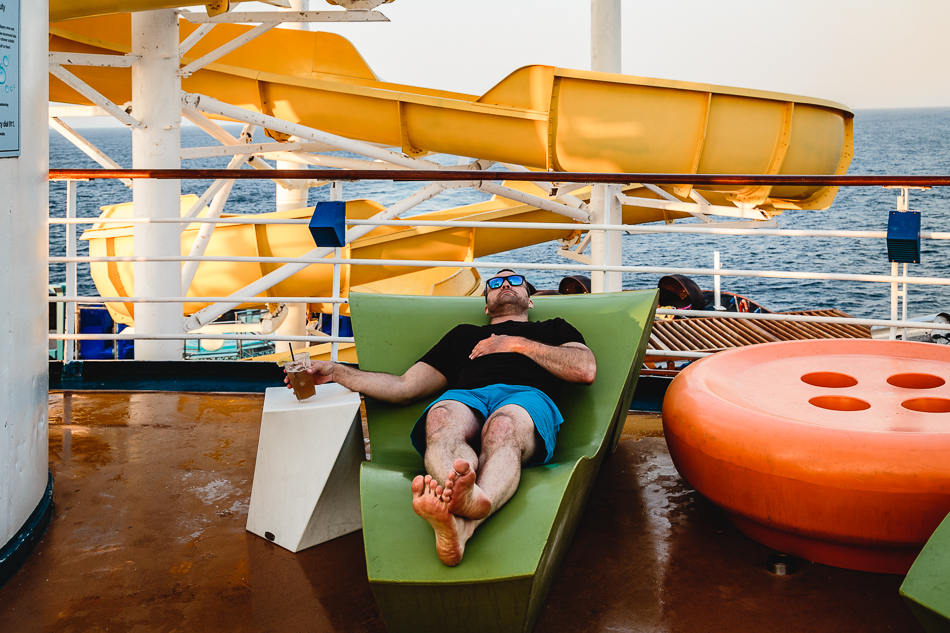 Cocktails. There was every kind of cocktail you could imagine, and then some. Needless to say, we indulged. I was a big fan of the Strawberry Daiquiris (the best I've ever had!) and Maragritas, and Dave consumed his fair share and more of Mai Tais and Long Island Iced Teas! 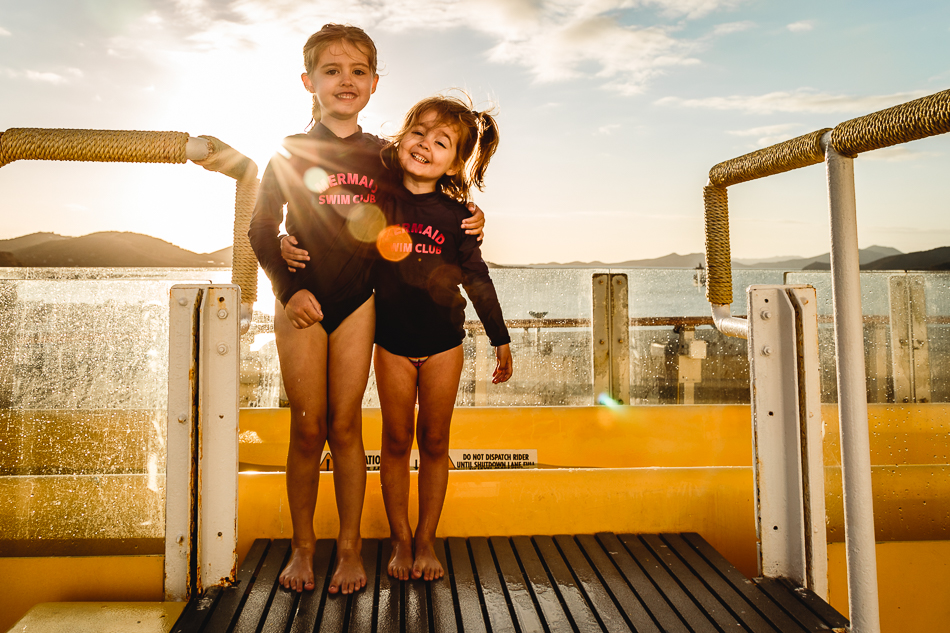 I'm pretty sure that along with the all-you-can-eat ice cream, the onboard splash park was the other big highlight for the girls. We spent most afternoons watching the girls play in the splash park (while we sipped on cocktails, of course!) and Punky must have gone on the big yellow waterslide over 100 times! She has certainly turned in to the little thrill-seeker, that one! 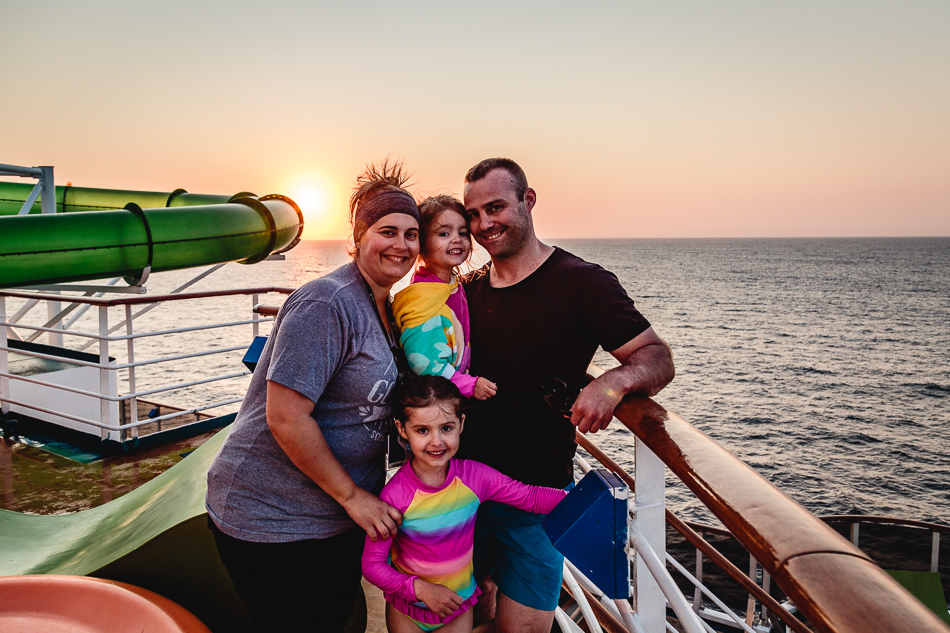 More than anything else, it was just really great to spend time together as a family, either just the four of us, or with the rest of the family that came along for the cruise. There is something magical about just getting to enjoy time together without the stress of work & school invading the serenity. This was our first real family holiday since having the girls, and it definitely won't be our last. The girls are already asking when we get to go on the big boat again, and just quietly, I wouldn't be surprised if we find ourselves sailing on the Carnival Spirit again some time in the next few years!

What's the best family holiday you've ever been on? What's your favourite cocktail?