All About Aperture {Photography Basics} | Photography 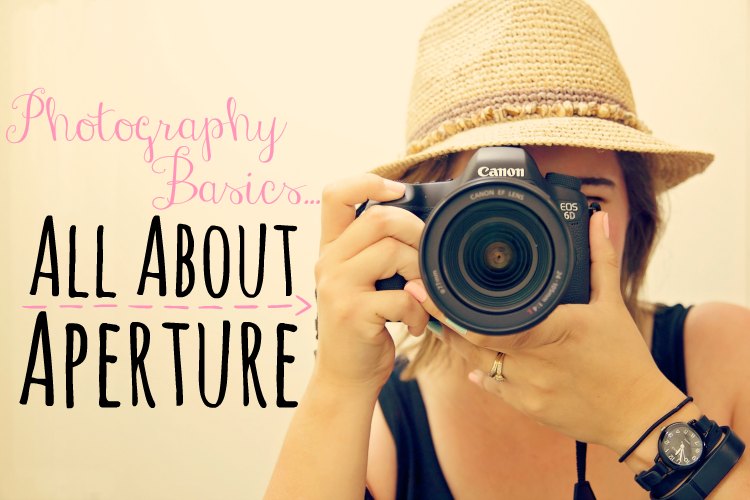 The Aperture. It has to be the number one thing that confuses people most about photography. By far, the aperture was the one function of my camera that took me the longest to wrap my head around.

Like the first two aspects of our cameras & exposure that I talked about in previous posts, Shutter Speed and ISO, the aperture has two functions. The first function is to help us get correct exposure for our images. By opening or closing the aperture we can let more or less light in to the camera's sensor.

The second function the aperture has is determining our depth of field. That is, how much of our image is in sharp focus. I'll touch on Depth of Field later in this post because I want to concentrate on the first function of the aperture, helping to create the correct exposure for our image.

We know that creating a photograph is all about how we capture the light. By combining the settings of our shutter speed, ISO and aperture we can determine how much light we let in to our camera, which directly affects how light or dark our image is.

For those that need a quick refresher, the shutter speed relates to how fast or slow the little doors (shutters) inside our camera open and close. The speed of your shutter determines how long your camera's sensor is exposed to the light coming through the doors.

The ISO setting you choose determines how sensitive the camera's sensor is to that light being let in. The shutter speed also affects the movement in your image, and the ISO affects the noise or grain in your image. If you're really not sure what I'm talking about it's probably a good idea to have a read through my previous posts in the Photography Basics series, which will hopefully give you a better understanding.

How does the aperture affect exposure?


Now we move on to the third component of creating a good exposure for our pictures, the aperture. The aperture is a hole or opening that gets bigger (wider) or smaller to allow more or less light to pass through your camera's lens. The aperture setting is measured in what we call f-stops. An f/stop is represented by a number.

Therefore:
A WIDE/LARGE f/stop is a SMALLER number (f/2) = OPENS the aperture for MORE light

A SMALL f/stop is a LARGER number (f/22) = CLOSES the aperture for LESS light.

Like I said, it's very confusing, but this article here explains it well. Another good way to get your head around how the aperture works is to look at a visual representation of the aperture and what it does when you open it up or close it down. See the image below...


How does the aperture affect depth of field?

Most modern digital cameras these days have a setting that allows you to decide on what aperture you want to use, and then the camera changes the shutter speed and ISO according to the available light in the scene you are photographing. This mode is called Aperture Priority mode (Av) on most cameras.

Popping your camera in to Aperture priority mode is one of the best ways to start experimenting with the cameras aperture. Once you've taken a few pictures in Av mode you can then pop them on your computer to see what happens to the photos you've taken.

If I'm taking a picture of one of my girls and I want to focus in on a detail, such as their hand or fingers and have everything else out of focus, I will open up my aperture (say around f/1.4 to f/2.2). However if I'm taking a photo of a beautiful sunset over the mountains I will close down my aperture (f/16 to f/22) so that the majority of my photo is in focus and not blurry.

I'm sure I'm probably confusing many of you right now, so I'll leave it there and finish with a few examples of my own work where you can really see the difference that your aperture setting makes to exposure and depth of field.

Please feel free to ask as many questions as you like in the comments about aperture or any other aspect of exposure and how your camera works and I'll do my best to give you the answer or point you in the right direction of someone who can explain it better than I can!

Hopefully this has helped you start to get your head around the aperture function on your camera and what it can do to your photos. As I said above, if you have any questions please hit me up with them in the comments below.