How to transform your kitchen {in just 4 days!} | Life 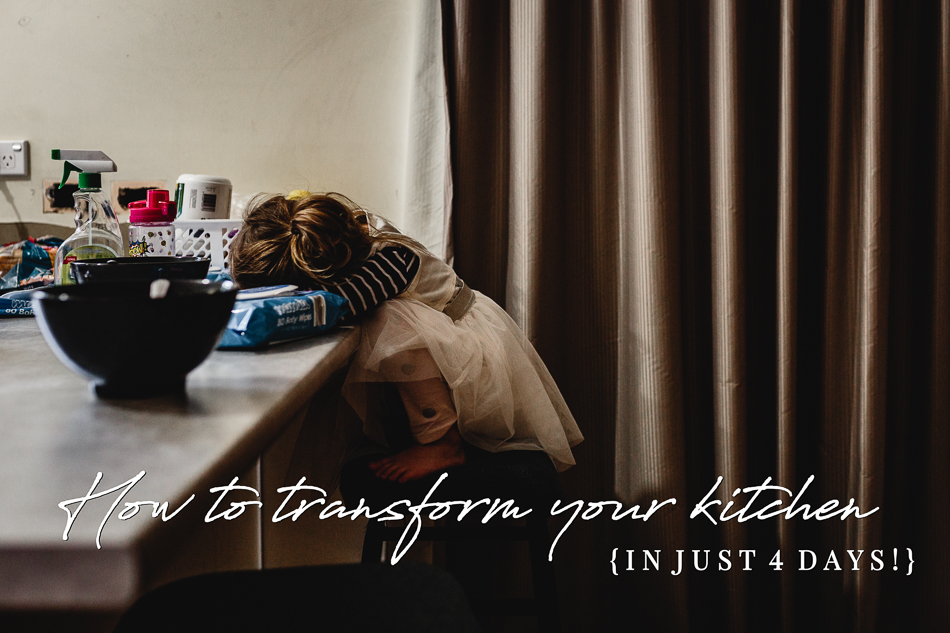 If you've come here looking for tips on how to really transform your kitchen you might be a little disappointed, I'm sorry! Much like my post back in 2014 about our bathroom renovation, the title of this post is more tongue-in-cheek than anything else. Because honestly, even after the last week, I still would have no idea how to renovate a kitchen, I was mostly just a very grateful observer who moved things about when asked and vacuumed up some dust!

The real hard work was done by Dave and his parents. Seriously, between the 3 of them (and my sister-in-law, who not only designed & project-managed but donated the kitchen!) they managed to demolish the old kitchen and install the new one in 4 days. Less really, if you consider that the 4th day was the day the bench was installed, and that was done by a professional!

But let me start at the beginning...

You might remember back at the start of May I wrote a post that mentioned how I started an electrical fire in my kitchen by spilling milk on our ancient stovetop. Despite the inconvenience, it ended up being a blessing in disguise, because as a result of that, we came to find ourselves mere months away from having a whole new kitchen. 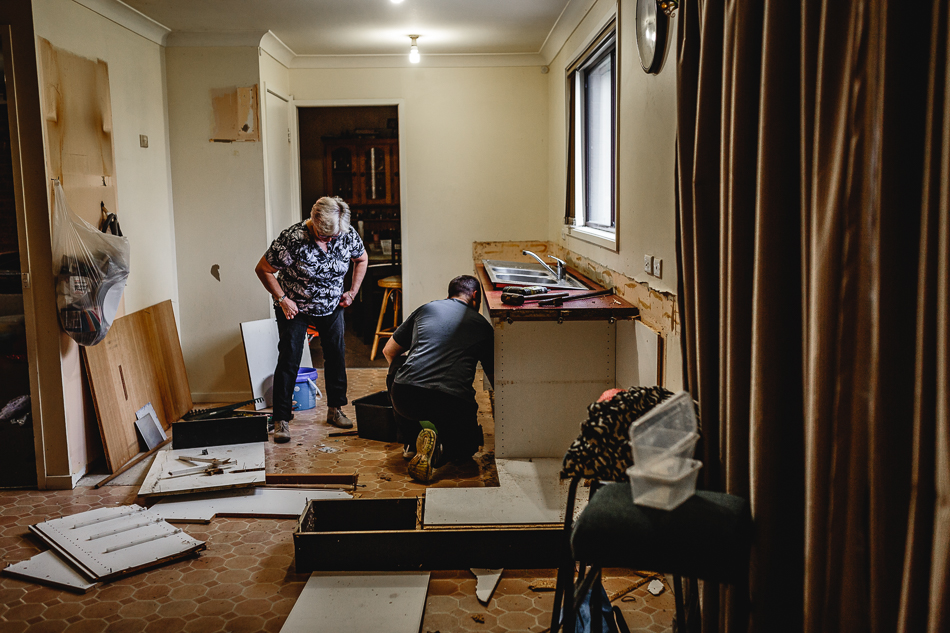 As it turned out, my sister-in-law was planning her own kitchen renovation, and when she came round to take some measurements for our new cooktop & oven (she works for a builder) she measured up the rest of the kitchen and declared that her old kitchen (which at 4 years was really not even that old!) would be easily rejigged to fit in to ours. And so it was we found ourselves planning our own kitchen renovation.

Last week Dave's parents came round and not only helped pull out the old kitchen, but also helped Dave to install the new one. The demo took less than a day, the install of the new cabinets & units 2 days. How they managed to figure it all out I still don't know. As soon as people start talking about millimetres and square metres my eyes glaze over. It's all gibberish to me. 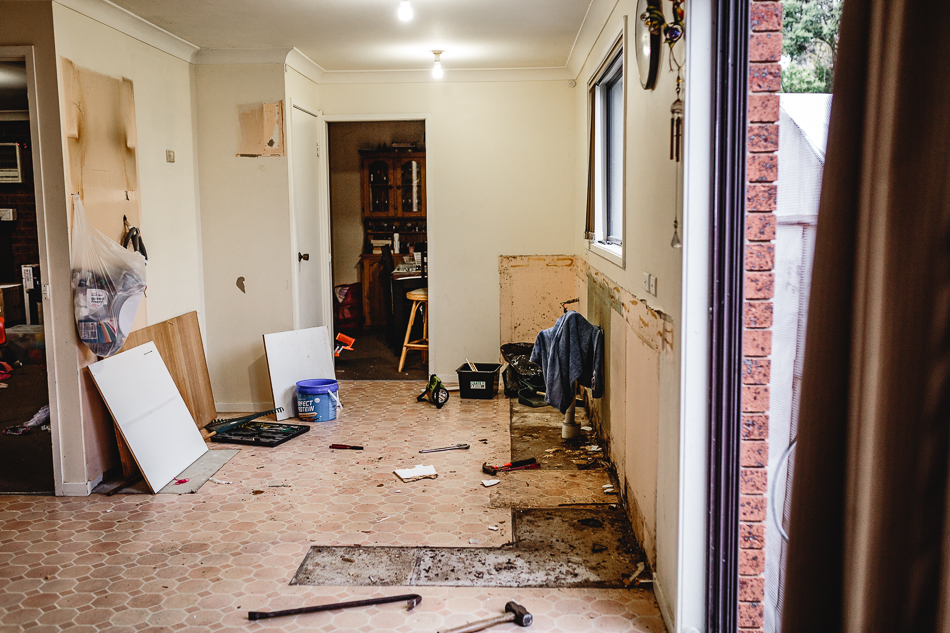 But through so much hard work they got everything installed. The hardest part by far was making sure that all of the new cabinetry was exactly level because nobody wants a sloped benchtop! We did run in to some difficulty in hanging some cabinets on one of the walls, as there are no studs to take the weight, but my father-in-law is doing some noodling and assures us he'll figure it out somehow! 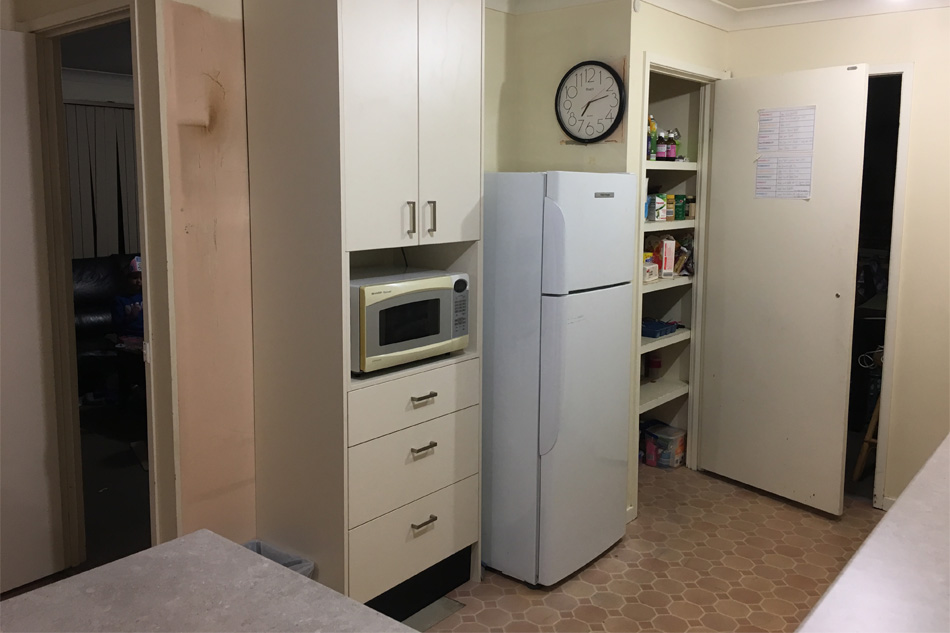 Another challenge in getting everything level was the fact that the old kitchen was installed before any flooring was, and so once the old kitchen was out there were missing pieces in the lino. And because the dimensions of the new kitchen are slightly different that means we have exposed bits of concrete around the place and even a few mm difference in the height of the floor can throw out the whole balance of the cabinets, so they had to work around that and spend a lot of time adjusting legs and using little bits of wood here and there to make everything perfect. 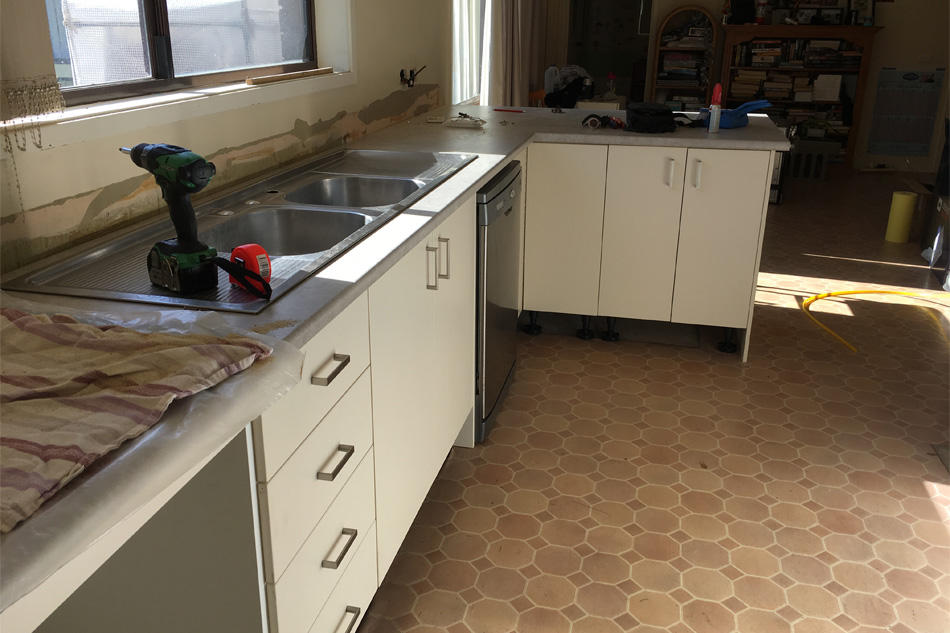 The new benchtop was installed on Saturday morning and I can't tell you how good it is to have a normal, smooth benchtop and not the disgusting textured one we had before. The one that you had to literally scrape dirt out of the grooves with a pin to get it to look clean. I love the fact that the new cupboard unit beside the fridge has a built-in spot for the microwave which means it's no longer sitting on the bench, taking up valuable space. The doors and cupboards are all soft-closing and we have so much more cupboard space than before. It's magnificent! 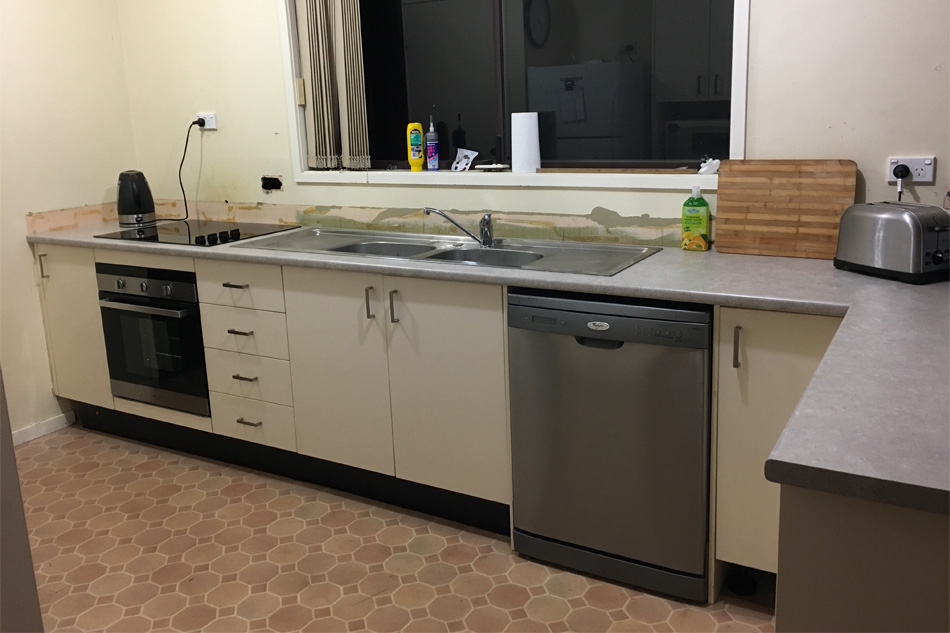 There is still a bit of work to be done, the tiling for the splashback will hopefully happen some time this week, and then early next year when we have more time and money again we'll be repainting the entire kitchen & backroom area and having new flooring put in (adios disgusting 40-year-old lino!!!).
Because everything happened so quickly I didn't really get a chance to do some proper before photos so you'll just have to make do with what I could pull together from my archives, but I think the photos should give you a pretty good idea of how it used to look and how it looks now.

All in all I am so unbelievably happy to have a lovely new kitchen and so grateful to have such an amazing husband and family who pulled together to make this happen. I don't know what we would do without them! I joked to Dave once it was all done that if he ever wants to leave the printing trade (or you know, when the printing trade dies!) he will at least have a new vocation he can pursue, that of kitchen installer!

Have you ever done your own kitchen renovation? Were you surprised by how easy or hard it was? What's the one thing you wish your kitchen had that it doesn't?