It's Thursday. And I'm thankful for...

Having a toilet to piss in. And a bath to bathe in. And certainly not the other way around. My bathroom reno is just about finished. Shower screen is being installed at midday. From start to finish it's been exactly 10 days. And less than $10,000. How freaking sweet is that!

And aside from the whole being thankful for pissing and bathing in style bizzo, I'm also damn thankful that it was all done so swiftly and with minimal fuss. If you are in the western Sydney area and looking to get your bathroom done, look no further than Alan. If you want his deets, email me!

I'm also thankful that teething for this munchkin... 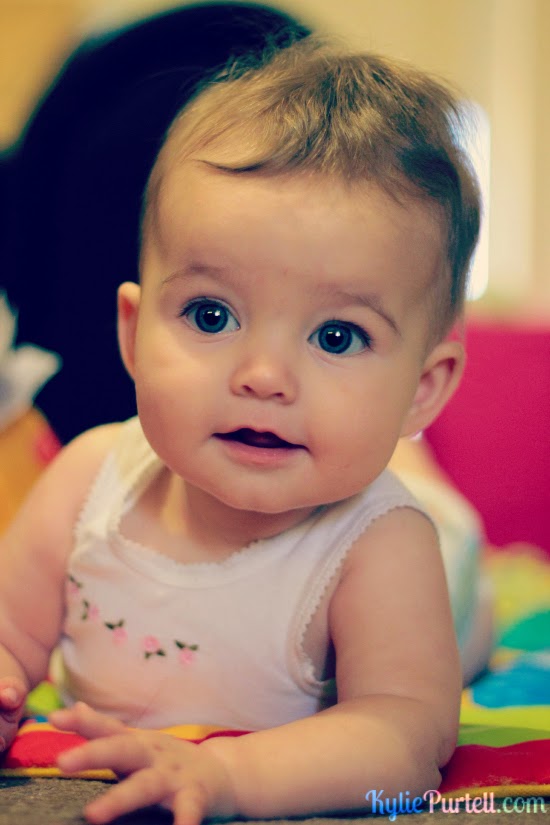 ....hasn't been as bad as I was dreading. Sure, she has been pretty sooky, but not overly bad, nothing some extra cuddles couldn't help. But she hasn't been anywhere near as bad as poor Punky was when those mother-flipping teeth were punching through her gums.

Punky got her first two teeth (bottom, front) at the same time, at about 7 months, one week. The first of July 2012 if we wanna be exact. She got her next two (top, front) about two months later, on Father's Day. Zee is 7 months in a few days and so far it seems like there is only the one coming through, so that may be why she hasn't been as bad as Punky. Or it could just be that they are different kids, whatevs.

And finally, I'm thankful that I actually lost half a kilo this week, despite the fact that I had a bit of a blow-out foodwise; pie, sausage roll, huge amounts of dinner and Zumbo chocolate fondant cake for dessert last Wednesday; chocolate sundae from Maccas Thursday night... I felt I should really buy something if I was using their toilet!; ribs and hot chips Friday night; and a cornetto and a half, plus apple crumble on Saturday night.

Not to mention the fact that I didn't do one minute of proper exercise due to the fact that I would not be able to cleanse my body of the unholy amounts of sweat I get covered in just thinking about raising my heart-rate! I can't tell you how much I am looking forward to having a shower again and being able to do a little exercise and bathe afterwards. It's gonna be sweeeet!

And that's my piece for today. Anyone else got any thankfuls they wanna share? Do you sweat as much as I do when you exercise (I sweat so much it looks like the exercise was done in the shower! Grossssse!!)? And what about it, Zumbo chocolate cake as health food?

Linking up with the lizards of The Lounge today over at Kim's super awesome hang-out, FFF, and with Rhi at A Parenting Life for Thankful Thursday.

Kylie Purtell said…
Ha! I have the 'you have to buy something if you use their toilet' thus the car is full of uneaten mentos or I drink far too much Ginger Beer (that's servos not maccas)
27 February 2014 at 07:45

Kylie Purtell said…
Wow did you take that last pic - it's sensational! So exciting to have a new bathroom, I've been really spoiled as we built our house new so everything is new, not sure I appreciate it as much as I should, although I have lived in my share of horrible old flats at university and as an early adult worker! I don't miss teething I have to say, but No.3 was pretty good, or maybe I was too busy to notice and just put his bad mood down to being tired (mother of the year) Congrats on still losing weight after pig out, I can't stop eating and stacked on 3kg in past month, probably do more as a wee bit nervous about H's surgery on Monday, long story, fill you in later. Have a fab Thursday lovely xxx
27 February 2014 at 10:05

Kylie Purtell said…
That last pic is awesome I totally understand why you wanted to share it and there was some relevance you mentioned watery type activities a few times. Glad to here that the teeth are being a bit kinder for Zee. That is such a cute pic of her as well. And yay for a new bathroom with minimal fuss. Thanks so much for joining in with #thankfulthursday today lovely. Sending you and your gorgeous cherubs lots of fairy wishes and butterfly kisses
27 February 2014 at 10:37

Kylie Purtell said…
I read the title as Thankful for Zumba and I was going to comment about how much i hated the Zumba classes I took, and how I just can't get 'jiggy with it'. But Zumbo, now that is something I can embrace wholeheartedly - that cake looks to die for -worth every calorie I reckon!!!
27 February 2014 at 10:59

Kylie Purtell said…
Your daughter is beyond beautiful. What a cutie. Luckily you mentioned that was the before shot of the bathroom, I was a little bewildered there for a minute being a bit slow to catch on. And then you mentioned cake and I saw the picture and now I'm drooling on the keyboard.
27 February 2014 at 11:20

Kylie Purtell said…
Yes, I also sweat so much that K normally goes "Eeeeeeeeewwwww - get away Mom" when I go to give her a kiss !!!!
Wow 10 days for a bathroom reno is amazing - ours took heaps longer but at least we had the family bathroom to use while it was getting done !!!
Have the best day !
Me
27 February 2014 at 12:18

Kylie Purtell said…
I sweat like a pig, so much so that it is often running in my eyes and down my back and chest. It is gross. But makes that shower afterwards feel sooooooooo good! I am glad teething doesn't seem to be as bad for miss Z and is was for Punky. Nick was a terrible teether :( And after my dental adventures recently, if it hurts anywhere near that much then I don't blame them for being sooky! xo Aroha
27 February 2014 at 13:44

Kylie Purtell said…
Teething is horrid, so glad bub number two is having a better time with it then your first. It can be so cruel. Looking forward to seeing your 'after' pics of your reno :)
And as for the 'water' pic, it is awesome, I would have picked it as a winner, its a cool shot. xx
27 February 2014 at 14:09

Kylie Purtell said…
I do not believe that that cake is a weight loss miracle! It looks too good!!! But, if it works, keep doing it. Have another slice for me.
27 February 2014 at 15:11

Kylie Purtell said…
You will be extremely thankful when it is finished next week! :) Yes I am a sweaty exerciser - need a twel and all that - gross :) Enjoy your shower!
27 February 2014 at 15:51

Kylie Purtell said…
Oooh I have bathroom Reno jealousy. At least, over the fact you nearly have one! I haven't had a bath in 5 years, and I really miss it. We"re planning to do the bathroom later this year and I've already picked my tub! You make GORGEOUS babies. You should add that to your CV. Along with taking amazing photos (related or otherwise!)
27 February 2014 at 21:48

Kylie Purtell said…
You must be so excited to have our bathroom so lose to finished. I survived a house of renovations...only to sell it a year later to build a new home. Some say I'm a devil for punishment, but I love the process :)
27 February 2014 at 21:57

Kylie Purtell said…
I'm a firm believer in cake as diet food and as for the whole sweating thing - yep, me too. Looking forward to seeing the new bathroom.
28 February 2014 at 00:28