Strangers in the Night {and getting older} | IBOT 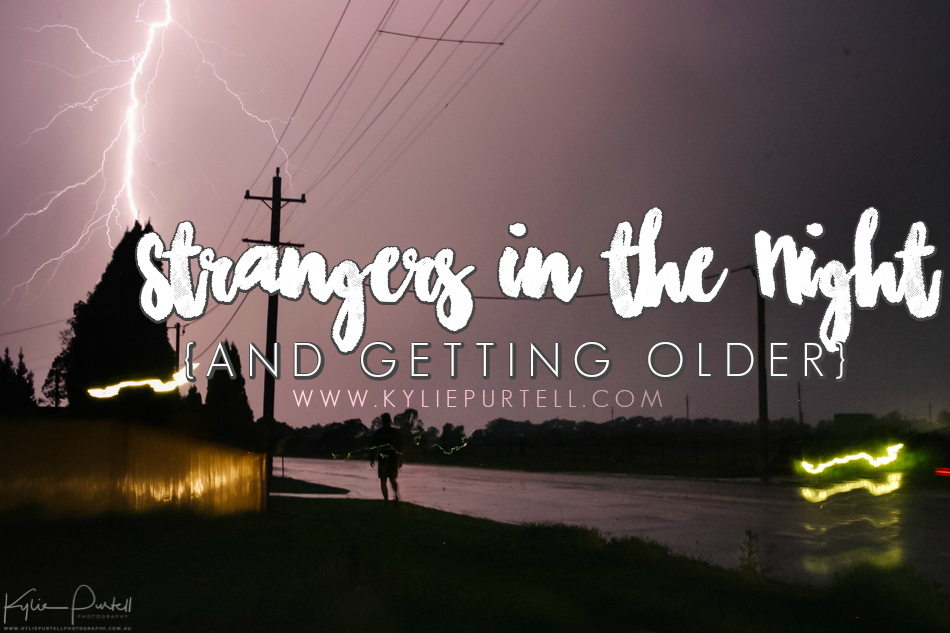 A funny thing happened on Sunday night. Well, it wasn't funny at the time, it was actually heart-racingly nerve-wracking, but afterwards the humour of it was definitely felt. It was 10 minutes to midnight and Dave and I were sitting on the lounge watching a movie when there was a tentative knock on the front-door. We looked at each other with WTF faces and Dave jumped up to put on a shirt before opening the door...


Before I go further with that story though, a little background about our weekend. It was Dave's birthday on Sunday. We had originally planned to go away for the night, but due to time and money constraints, that didn't end up happening. I'd already organised for the girls to spend the night at my Mum's house though, and not wanting to lose the opportunity of a rare child-free night, we decided that Mum would still mind the kids and we'd go out to dinner instead.

I was the photographer for my sister-in-law's wedding back in July, and as a thank you she had given me a $150 gift voucher to a local tapas restaurant that Dave and I have wanted to visit for ages. So I dropped the girls off at Mum's on Saturday arvo, and we headed off to dinner at the respectably senior time of 6pm. The food was amazing. So good that we will most definitely be going back.

When we got home from dinner (before 8pm!) we settled on to the lounge for a junk-food binge and movie-watching session. We ended up watching Fargo, as it was the only movie on Netflix that we were mildly interested in watching. It was weird. It didn't have an ending. But I can't tell you how glorious it was to watch a movie from start to finish with no interuptions. I don't think that's happened since 2011!

After Fargo we watched The Wolf of Wall Street (yep, that is how behind we are in watching movies!) and dragged ourselves to bed at a hedonistic 3am! And didn't get out of bed again until 1pm the next day. 10 glorious hours of uninterupted sleep. We were woken up by the simple fact that it was hot, not by the screams of two small children fighting over identical toys.

After a leisurely breakfast and coffee we sat and chatted a while, before reluctantly starting to get ready to go and pick up the hell kittens. They were super excited to see us, and I was struck again by the contradiction of being a parent; you want nothing more than a little alone time, some kid-free time with your partner to reconnect and just be together as people, rather than being parents, yet at the same time you can't wait to see your kids again. Being a parent really messes with your head!

We went out to dinner with the girls and my Mum & step-Dad, Dave blew out the candles on his cake (because you don't actually age unless you blow out some candles on a cake according to Punky) and we bundled ourselves in to the car to head home. Thankfully the girls both fell asleep and stayed asleep through the transfer from car to bed, so Dave and I retired to the lounge to watch yet another movie that we'd chosen before we left that afternoon, Anchorman 2.

The movie was so stupidly funny and we were enjoying it immensley. We were just getting to the much-anticipated news-reader war scene when the tentaive knock sounded at the front door. It was 11:50pm. We paused the movie and Dave went to answer the door. I sat on the lounge listening, with all manner of scenarios playing through my head as to what this midnight visit could be about. 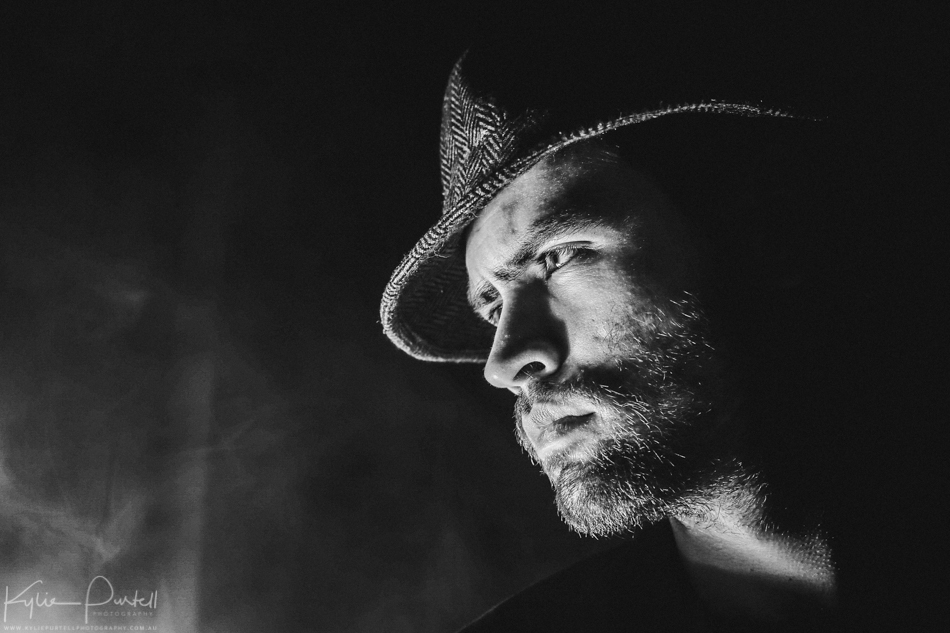 Dave opened the door to find a young man of about 20 swaying on the doorstep. He cleared his throat and started rambling about having been at the pub 300m down the road and he wassn't sure how to get home. He'd been at the races all day (which are located a convenient 100m away from the pub) and they'd gone to the pub afterwards to keep drinking. At some point he must have passed out, and when he woke up his friends were gone and he wasn't quite sure where he was. At least that's what Dave could gather from his story. The guy was struggling to finish his sentences.

He knew were he lived, but had no idea how to get there. He asked if he could borrow a phone to call his parents, so Dave grabbed his mobile, but there was no answer at his house. Dave asked him again where he lived and then, being the amazing man that he is, offered to give the guy a lift home (he lived less than 10 minutes away).

During this exchange I was sitting on the lounge, with my phone in my hand, triple-zero dialed in to my phone, just waiting to hit 'Call' in case this guys friends should suddenly show up and try to rob us. Call it a suspicious mind, but I was having visions of this being some elabortae ruse to get us to open the door so they could bust in. I have a very fertile imagination!

I was none too impressed when Dave offered to give the guy a lift home, because that fertile imagination started dreaming of all manner of misadventures that would come from this. That Dave would be robbed or car jacked, that this guy was luring the man out of the house so his mates could then rob the place once he was gone, it was all very doom & gloom. I told Dave if he wasn't back in 20 minutes I was calling the cops.

15 minutes later Dave returned, shaking his head, unsure of what to make of this strange midnight-encounter. The poor kid that he drove home was beyond embarassed at having found himself all alone and lost, with no phone and no real idea of which way he needed to walk to get home. The servo next to the pub was closed, so he just started walking until he saw a house with lights on where he might get help.

Dave has a bit of a good samaritan complex, and is constantly on the look-out for people in trouble that he can offer assistance to (I think he secretly hopes that he'll help a rich person one day who might reward him for his help handsomely, lol). He's always thinking about others, and often comes home with tales of good deeds that he's done when out and about. He's a big one for the random acts of kindness is my husband and I love him for it. Most of the time. When it doesn't happen at midnight on a Sunday night!

After the shock of our late-night visitor wore off we started to see the funny side of the encounter, thanks to nothing bad having come from it. We talked about how funny it was that a grown man essentially turned up on our doorstep, saying he was lost. We talked about how embarrassed and apologetic the guy was, and how Dave told him not to worry, he'd been there plenty of times when he was young.

Dave thinks that maybe this is a sign that he is officially 'old' now. Back in the day he would have been the drunk young man, trying to find his way home, and now here he is, the kind older stranger, offering to help a young drunk get home safe. I think he feels it was a 'passing of the baton' of sorts, that at 36 years of age, his days of getting so drunk he can't get himself home are behind him.

Regardless of the matter, if there is one thing this experience has taught me, it's that I need to start remembering to lock the screen door at night when Dave is on night shift! The last thing I need is another drunk turning up on my doorstep when I'm home alone with the girls. My heart has mostly recovered from the shock of it, and we can laugh about it now, but man was my mind jumping to some crazy conclusions while it was happening. But we learnt a few lessons from it.

One, that Dave is almost too kind for his own good. Two, it's always a good idea to take your phone with you when you go out drinking all day & night. Three, I need to lock the screen door when I'm at home by myself with the girls, so if it ever happens again there is another locked door between me and whatever drunk young person is knocking on my door at midnight!

We've lived here for over 9 years, and being on a main road between two towns has certainly bought us our far share of weird. But this takes the cake, and has given us a story that we'll talk about for years to come. It might even be weirder than that time we discovered a pair of pink underwear and a foam mattress on our front lawn!