Can I Quote You on That?

I have been sitting in front of the computer for ages doing anything but what I originally sat down to do,  which is to write a post for IBOT.

I have posts in my drafts folder that I could have worked on and used, but I just wasn't feeling them, you know? I've got other ideas for blog posts scribbled in my notebook and listed in notes on my iPhone, but they need more fleshing out than my brain will allow.

So instead of writing a bloody blog post I've been reading other blogs, watching twitter, faffing about on facebook, playing with photos. You know, the usual.

So I thought and I thought and eventually my brain exploded from overheating and now you have the ghost of Kylez sitting here typing away and there is gonna be one pissed off husband getting home from work in the morning to find not only does he have to clean the bathroom from now on but he has to clean his wife's brains off the floor too. Oh well, it seriously needs a wash, this floor. I don't want to think about how long it's been!

And while trying to remember the last time I washed the floor it came to me (as these things often do when I contemplate any kind of housework, something more interesting always comes along and oh shit,  I've run out of time to do the housework, sorry Dave). I'll write a blog post about quotes. Yes I've blogged quotes before, but this time it's different. This time I've invented a word!

As many of you know, I take a ridiculous amount of photos. More photos than I know what to do with. I have always though that some of my photos would lend themselves quite well to some sweet quotes though. You know, the type you see shared on facebook or pinterest or anywhere for that matter.

I see them everywhere, all over the interwebs and I says to myself, I says "Kylie. You have all of these photos and you do nothing with them. Why not make you own 'quiptures'?" So I did. (Do you see what I did there? Quotes. Pictures. Quiptures! Oh yeah baby, it's almost midnight and I am inventing words. Word) 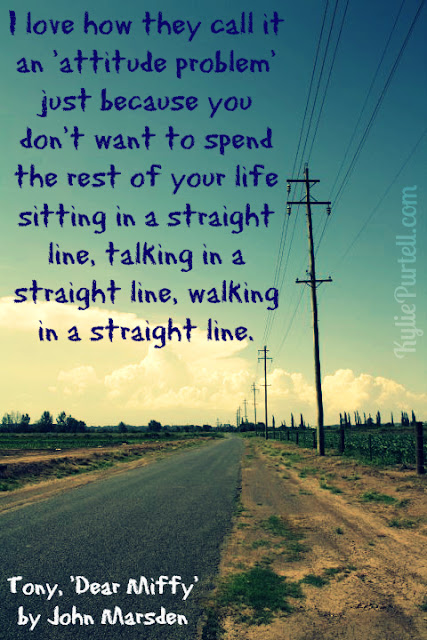 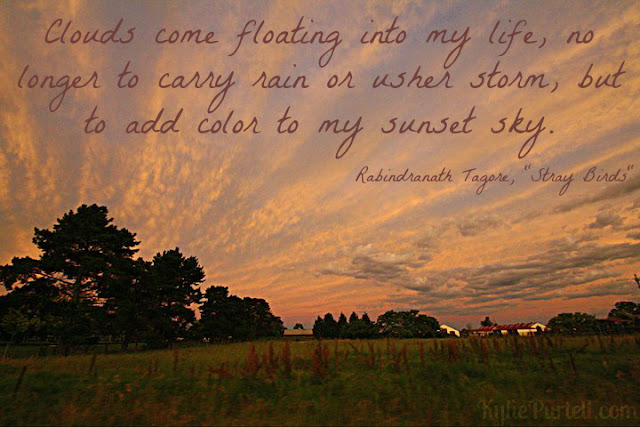 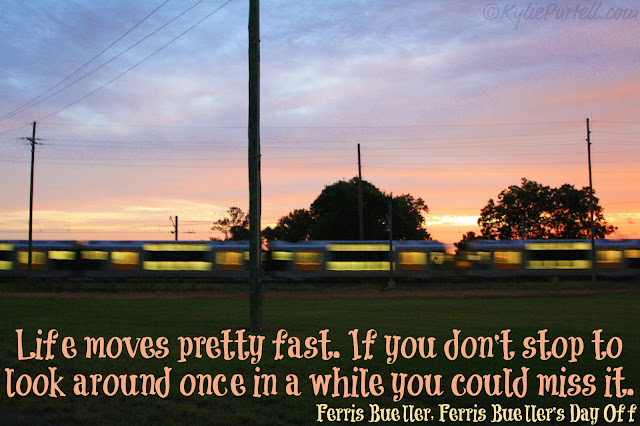 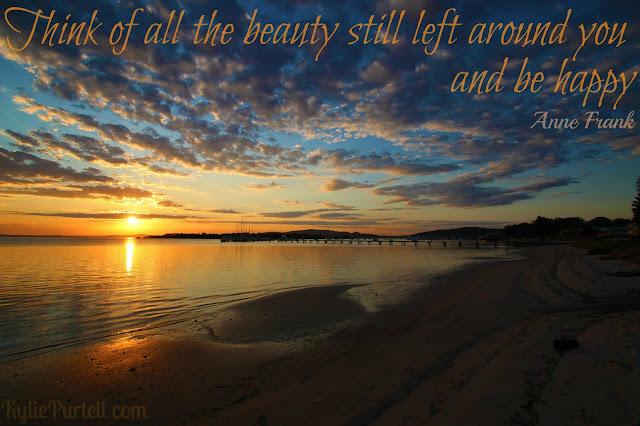 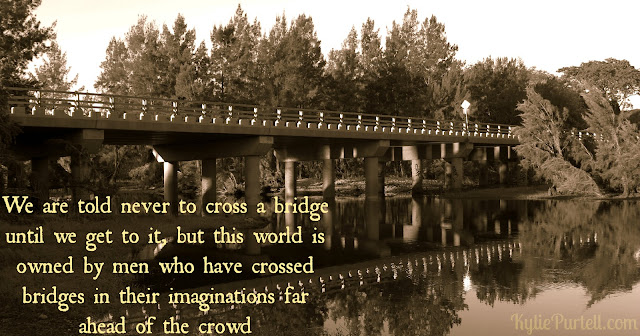 So there it is bitches my lovelies. My Quiptures. What ya think? Do you have a fave quote you'd like to see me turn in to a totally awesome Quipture? Lay it on me in the comments. And please don't ask me why I'm talking (typing) like a try-hard gangster yo, I can't explain it but it's not unusual. Just ask Kelly HTandT. She has facebook inbox message evidence. Which she will probably use to blackmail me with and make some extra cash coz she is The Budget Queen and she knows how to make the money!

And don't forget that this post is linked up with the raddest of rad rad girls, Jess, coz she hosts the dope IBOT linky which you should totally go check out now! After you leave me a comment of course!

Catherine Rodie said…
They're great Kylie. I've been doing some of my own too, as they quotes are a nice thing to share on facebook. I'm glad your head didn't really explode.
30 October 2012 at 07:40

Rhianna said…
I have been meaning to do the same to some of my photos but I hadn't been able to think of the term for it like you so it is still on my to do list. Actually I never thought of using other people's quotes I was hoping I would be able to use my own words of wisdom which is clearly the reason I am still yet to get it done! You certainly have a gift for photography those photos are awesome

Ai Sakura said…
wow those are amazing photos! And I actually do love to remember quotes too :) you've made amazing quiptures there. Word.

Kylie Purtell said…
I think Dave is glad I didn't really explode either! Hehe. Now that I've started all I want to do is come up with more of them, I think I'm becoming a little obsessed!
30 October 2012 at 12:24

Kylie Purtell said…
The Hawkesbury really does get some spectacular sunsets, one thing I miss the most now that I have a baby is not being able to just jump in the car and go take pics of a gorgeous sunset.
30 October 2012 at 12:26

Kylie Purtell said…
If I had words of wisdom I would use my own but sadly my words are not cool and wisdomful enough to use! Plus I needed to justify keeping the notebooks full of quotes to Dave somehow!
30 October 2012 at 12:28

Aroha @ Colours of Sunset said…
LOVE the bridge quote! And do you know, sounds like we've had the same kind of morning. I have over 1500 pics from our NZ holiday to sort/edit/share in various places. Managed to get an IBOT post in there - and glad I did too as it's Jess's last one! But I've been sitting in front of the computer for 3 hours and don't feel terribly accomplished!
30 October 2012 at 12:29

Kylie Purtell said…
Thanks! I think I am going to have to make more coz I have so many quotes and so many photos! Might as well put them to good use!
30 October 2012 at 12:30

Grace said…
Oh, that photo of Kel is hilarious! That one's going viral! :)
Seriously though, I love them! Especially the second one of clouds. And I reckon that Ferris Bueller quote is one of my all time favourites.
30 October 2012 at 14:04

Kel said…
Gold! Love the quotes, love the pics, and you know I'm down with that gangsta shit. If I had any interest in pinning I would totes pin the shit out of this!
30 October 2012 at 17:04

Kirsty @ My Home Truths said…
I'm rather envious of your Quiptures - your photos are fab! How did you add the quotes to them? Not having a scrap of creativity in my body, I have no idea about this stuff... Looking forward to seeing more.
30 October 2012 at 20:14

EssentiallyJess said…
Awesome quiptures! And did you take those pics yourself? They are awesome.
I love the bridge one. :)
30 October 2012 at 21:00

Sim said…
Can't wait to see the word quiptures appear in the Macquarie Dictionary next year! Love the photos too. I grew up in the Hawkesbury but don't remember such beauty!
30 October 2012 at 21:30

Anonymous said…
Nice one beatch! I'm a fan of most things Mr Bueller says as well flying high and Monty Python
30 October 2012 at 23:14

Kylie Purtell said…
I feel like that nearly every time I sit in front of the computer. Spend hours there but rarely get anything constructive done. Not to mention the time I spend on the ipad also!
31 October 2012 at 11:30

Kylie Purtell said…
Yep, the Ferris Bueller one is a classic, I just love that movie so much! The pic of Kel was certainly the only one I could have used for that quote.
31 October 2012 at 11:31

Kylie Purtell said…
Dude, you would love pinning but it would be the end of your life as you know it. If I were you I would hold off on joining until you are on maternity leave again, you can't waste the last few weeks you have at home on pinning, and believe me, you would go nuts on it!
31 October 2012 at 11:33

Kylie Purtell said…
Hey Kirsty, I use an online photo editing website called PicMonkey (www.picmonkey.com). It is seriously the easiest thing to use, you should totally try it out
31 October 2012 at 11:34

Kylie Purtell said…
Thanks Jess! I did take the pics, I have spent many hours of my life roaming the Hawkesbury (and a few other places) and taking shitloads of photos!
31 October 2012 at 11:35

Kylie Purtell said…
I am hoping that if I use it enough there will be cause for it's inclusion. Everyone needs to help me spread the word. Literally! Lol!

I love the Hawkesbury, there are some beautiful places, most of my pics are taken around Yarramundi and the lower lying areas like Cornwallis, I find that's the best spot for sunsets.
31 October 2012 at 11:37

Kylie Purtell said…
Oh man, I love flying high and Monty Python too! My Mum and Dad introduced me to them when I was young and I was hooked. Of them all though, I think my fave Monty Python quote is "He is not the messiah, he's a naughty little boy!" My sisters and I say this to each other all the time, and especially to our brother. I am now gonna have to make some Python Quiptures!
31 October 2012 at 11:39

The Kids Are All Right said…
These are aswesome. I love love love that Ferris Bueller quote - I think about it often, and think that film is genius. I'll be pinning, don't you worry about that.
1 November 2012 at 06:31

Jules said…
Love the photo's Kylie, crossing the bridge quote. So darn true and so limiting. Much prefer "Build the bridge and get over it" as said by Hannah Montana and worn out by my teens. Welcome aboard 'BAM'.
3 November 2012 at 09:29

Kim-Marie from Kimba Likes said…
Quiptures is a little too biblical for me but I get it.