Things I want to remember {last days of summer} | Life 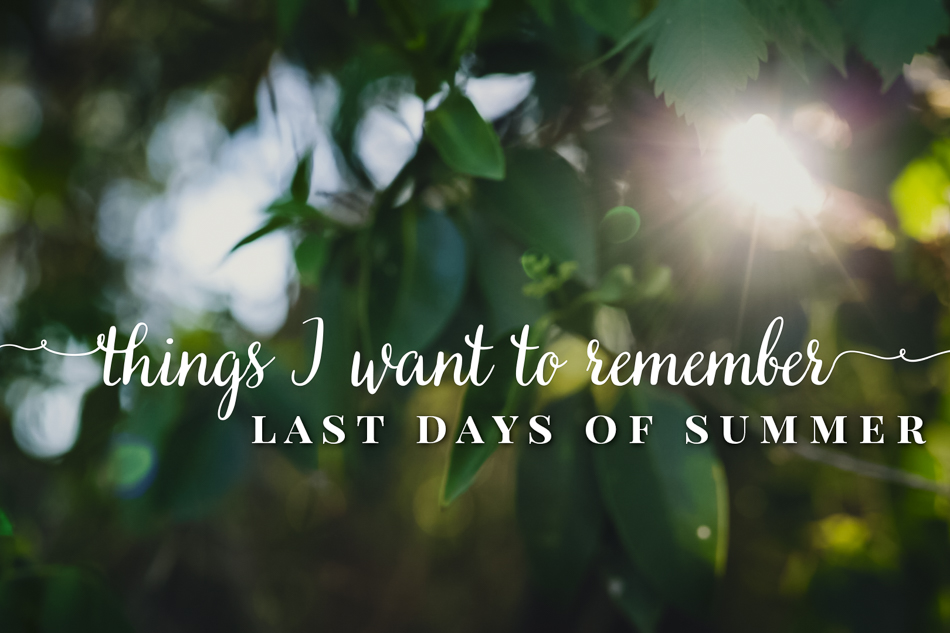 Can you believe today is the last official day of summer?! I'm sure March has got a few hot days still up her sleeve, but for the most part, the weather the last week has been positively gorgeous! Honestly though, anything that isn't 47 degrees is pretty gorgeous!

It's been a long, hot summer but despite the heat it's been one of our best summers in a while. We didn't get up to a great deal, but we spent lots of time together as a family and outside and that's all that really matters.

You may remember last year I was doing a course called Filming Life by one of my favourite photographers, Courtney Holmes. It was a 4 week course designed specifically for photographers wanting to branch out in to film & learn how to create authentic, emotional, genuine films for families.

Since finishing the course I've done quite a bit of filming, but up until last week I'd not really had much of a chance to edit anything together. I have quite a few plans for films, such as one with the footage I shot over Punky's 5th birthday, but I'm a bit of a perfectionist and finding a good chunk of time to dedicate to editing them all together has proven tougher than I thought.

I was determined to get at least one film done though, using the prompt that Courtney gave us in our FB workshop group. The prompt is "things I want to remember" and I used it as my inspiration for doing some filming outside with Dave & the girls last week.

This summer was pretty momentous for us, with it being Punky's last summer before starting school and taking her first real steps out in to the big wide world. I'm so proud of her, but seeing how rapidly she is learning and growing up, it's made me a little nostalgic and determined to document every moment that I can.

Last Thursday we spent most of the afternoon after Punky finished school out in the backyard. I knew from having looked at the weather forecast that this would most likely be the last beautiful sunny summer day before the change of season.

So while we pottered around outside together I grabbed my camera and started filming, because this summer is something I want to remember forever.

And so, here is my film, Things I want to remember - Last days of summer...


If you were going to make a video of the things you want to remember, what would be in your film? Are you glad to see the end of summer? What's your favourite season?