It's beginning to look a lot like Christmas #giftorium // PR // Life 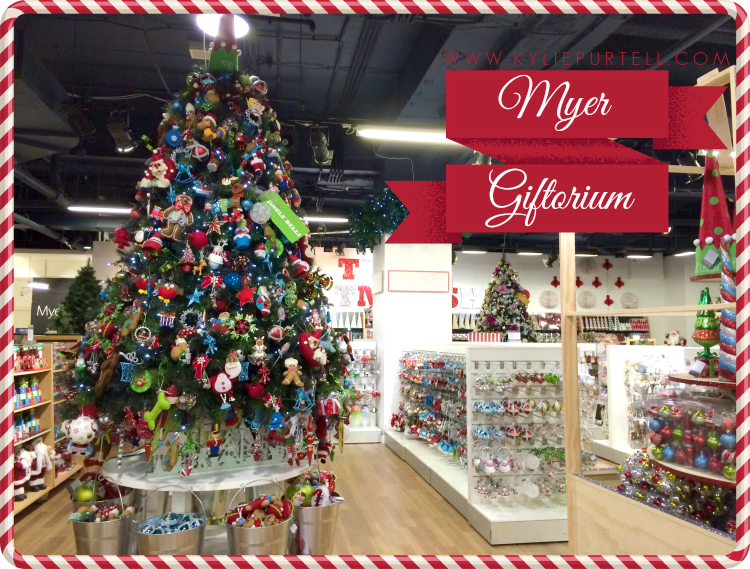 Please see disclaimer at the end of this post...

A couple of weeks ago I wrote about taking the girls in to the city to meet Hi-5 and how I was proud of myself for doing something with them by myself after avoiding it for so long. Well 2 Fridays ago, just 3 days after that first city outing, I upped the stakes and took them to the city by myself again. On the train. A train ride that takes an hour and a half ONE way! And we survived!

All it took was a bit of forward planning and a couple of backpacks filled with toys and everyone had a great time on the train. It was both girls first time to travel on one and I think they both enjoyed it. Punky was a little unsure of it all when we first got on, but she soon warmed up and really enjoyed seeing all the people and stations.

Our destination for this trip was Town Hall station, followed by a short walk to the Sydney City Myer store on George St. We'd been invited to an Australia-first Christmas shopping experience, created by the lovely peeps at Myer.

The Myer Giftorium is everything you would expect from a dedicated Christmas shopping space and we certainly weren't disappointed. The minute we got off the lift Punky started exclaiming "Woooow, it's so pretty!" and was mesmerised by all the Christmas glitz and glamour.

The place was wall to wall Christmas, with everything from sparkling Christmas decorations, to every toy you could imagine for kids, to unique and interesting gifts for every person you can think of. There was roving magicians and musicians, face-painting, personal shoppers, and demonstrations of some of the amazing toys on sale.

Punky had the best time playing with a remote-controlled dinosaur while we waited in the face painting line, and almost caused a few minor accidents playing with the speedy remote-control car. Let's just say I won't be letting her get behind the wheel any time soon as her driving skills left a little to be desired! Good thing she's not quite 3 yet and we have plenty of time before it's an issue!

The girls had a great time looking at all the Christmas decorations and picking out a few special ones to put on the tree this year. They also really loved checking out the toys, especially the giant Lego and Duplo displays. I was hard pressed stopping Zee from tearing the whole thing down to be honest.

I'm definitely keen to return to the Giftorium sans kids so I can have a proper look and choose a few gifts for the people on my list. I saw quite a few things that will do nicely and make some special people smile.

Myer was nice enough to give all the bloggers that attended a $50 voucher to spend on the day, and while part of me wanted to spend it on the girls, the other part felt that I really should be rewarded for tackling the city and the train with the girls on my own, and so I spent most of it on a funky new watch for myself, and the remaining amount on a bribe for Punky (a pair of Princess Sophia princess shoes).

The bribe worked and Punky was super good for the rest of the excursion. After we'd had our fill of the Giftorium we headed downstairs to the parent's room so that I could extract Zee from her soaking wet clothes (note to self: don't leave child unattended with drink bottle) and let them run off a bit of steam chasing each other around the room.

We then headed back to the station to grab some lunch to eat on the train and it was so much fun watching Punky's awe at the big city around her. At one point, while we were standing across the road from the Queen Victoria Building, Punky pointed to the sky and told me about how "berry, berry, berry, berry big" the buildings were. 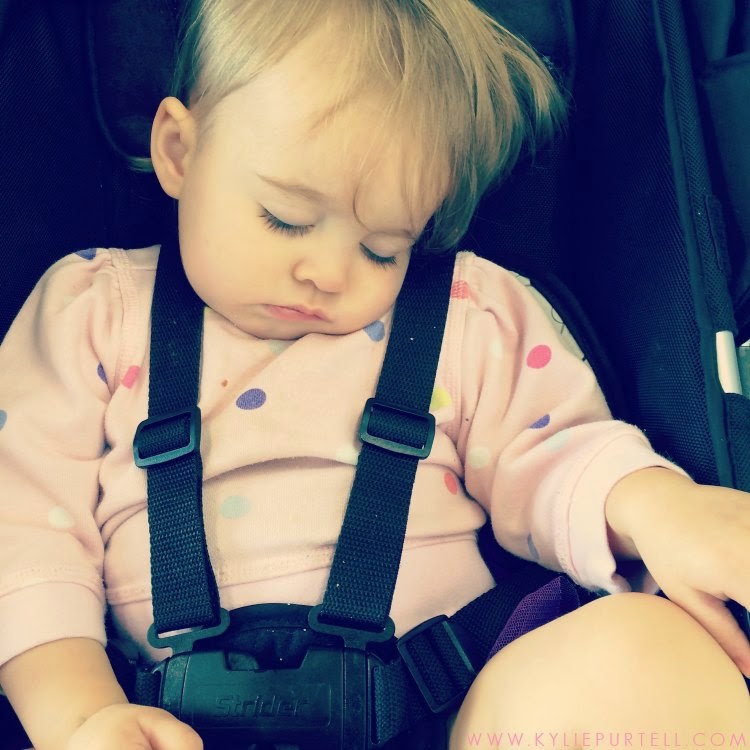 The train trip home was uneventful, Zee couldn't resist the motion of the train and fell asleep within 5 minutes. Punky was also a little worn out I suspect and was content to sit on my lap and watch some TV shows on the iPod.

We had a really great (although exhausting) day and I am definitely going to make more of an effort to do stuff like this with the girls again. Christmas was always my most favourite time of the year when I was a kid, and I think we might have to make it an annual tradition to go in to the city each year and visit the Myer Giftorium.

I can highly recommend checking out the Giftorium if nothing else than for the experience of being surrounded by all that Christmas cheer. There's a little something for everyone there and I'm sure you'll also come away wanting more than a thing or two yourself!

Have you visited the Myer Giftorium yet? Do you enjoy the traditions and excitement around Christmas and the subsequent shopping opportunities or do you avoid it like the plague?

Disclaimer: We were invited to the opening of the Myer Giftorium by the lovely people at Kids Business and Myer, and were gifted a $50 voucher to spend on the day, as well as a SodaStream Play machine and goody bag. As always, all opinions expressed are my own.

Kylie Purtell said…
This looks really awesome, and well done on getting there and back! It took me 2.5 hours each way to get to the city from here and I was so thankful the whole time that I was on my own. I love those Little Miss prints! Such a lovely touch.
28 October 2014 at 07:20

Kylie Purtell said…
Your girls are so adorable. I loved the Perth giftorium launch but ours looks very low key to yours.
28 October 2014 at 07:30

Kylie Purtell said…
Those pics are soooooooo cute. Sounds like a great day all round (and good on you for braving that epic train journey). Looks like you'll be set for Christmas in no time!
28 October 2014 at 07:56

Kylie Purtell said…
What a great day, sounds like so much fun. Well done on tackling the city and trains with two small kids. Sending lots of fairy wishes and butterfly kisses your way.
28 October 2014 at 10:23

Kylie Purtell said…
I was all set to attend the Melbourne event and then the car accident repair happened to be on at the same time. Looks fun and I love that face paint.
28 October 2014 at 10:43

Kylie Purtell said…
I'm so jealous. Harvest starting early meant I was able to get to Perth for the WA one. Cant wait to check it out in a few weeks though. I plan on a whole day Christmas shopping without the kids!
28 October 2014 at 12:38

Kylie Purtell said…
Shesh what a massive effort that was but Im' sure it was worth it for the memories you made and I'm very glad you bought yourself something, you DO deserve it! Must get to Myer before it gets too busy and close to Xmas!
28 October 2014 at 13:39

Kylie Purtell said…
Sounds like a massive day out, but worth it. I love Christmas time and while going to the shops with kids in tow can be an absolute mission, I do love it. Everyone has been going on about Myer so I suppose I better check it out.
28 October 2014 at 14:24

Kylie Purtell said…
Wow the trains in Sydney are so much better than the ones up here in Brisbane. I thought that our 45 minute train ride each way was long, but you definitely have dedication Kylie. I spent some of my voucher on myself too which was a very rare occurrence.
28 October 2014 at 21:13

Kylie Purtell said…
Punky looks so cute with her facepaint! I wish that there was something like that here...although I would be happy for it to wait until November lol!
28 October 2014 at 22:25

Kylie Purtell said…
Wow! What a fantastic day - glad the girls had such a great time! I have to take my hat off to you for braving the train with the kiddies - I don't think I would have been brave enough to do the same! Sadly it seems we somehow never get to meet - we missed the Hi-5 concert due to an unfortunate case of road accident / road bullying /road rage and we were not invited to the myer giftorium :( a tad bit jealous though reading your post! I must say the face painter did an awesome job! My lil Miss 3 would have so wanted that too! Hopefully see you at Bloggers Lunch next month?
30 October 2014 at 00:35