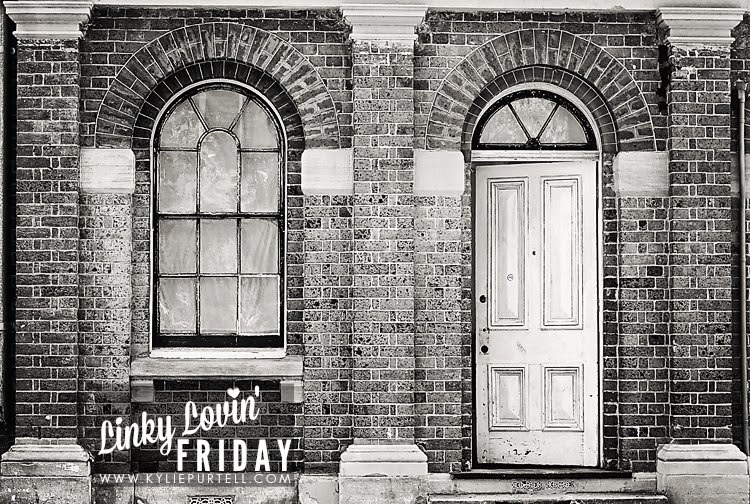 Happy Friyay, as one of my favourite people, Vicki, likes to say! It's been a bit of a crazy week since I last sat down to write a Linky Lovin' post. Dave and I had another lucky kid-free night last Saturday when we went to my girlfriend's engagement party. Let's just say we got sooooo happy that we had to check out of our hotel and go the 2 minutes to Mum's house to crash on her lounge for a few hours before we could go to my sister's and see the girls.

We had so many 'lemonades' that I didn't want to risk driving with any kind of residual blood alcohol and to be honest, with the whole not getting back to the hotel room until almost 3am, and then losing an hour automatically thanks to daylight saving, I was working on about 4 hours sleep and it just was not a good idea to get behind the wheel!

The rest of the week has been quite lovely thanks to the aforementioned start of daylight saving, and the fact that the girls are now sleeping past 5:30am again. Have I mentioned before how much I love daylight saving?

The only downside to the week has been having to take the car to the mechanic unexpectedly when the indicator decided to go berserk and not turn off, accompanied by some lovely wisps of white smoke that started coming out of the steering wheel. I also had to walk the 3kms home from the mechanic with Zee in the tiny umbrella stroller because our other car only has one anchor point and it's wreaked havoc on my foot and flared my plantar fasciitis again.

The good news is that it was all easily fixed and we can pick up the car this afternoon. I'm not quite sure how much the bill is going to be, but as long as it's under $400 I'll be happy. Anything more and we may as well just get a new bloody car! I can't wait till we have met our savings target and can go car shopping next August!

But anyway, enough about me, what about you? Have you had a great week or a not so good one? I don't know about you but I have read so much good stuff lately that it was really hard to put this post together without including about 15 links. So I've broken it down and saved some for next week's post as I have a lot of work coming up and I know I won't get to read as much as usual. So, without further ado, here's your linky lovin for the weekend...

Yep, the whole burqa debate is a political hot potato but I love that Jules has gone there and what she says on the issue. Personally I agree with her, but she spells it out so much better and succinctly than I could ever hope to.


When I first noticed that I was taking way too many digital photos than I ever needed with film, I dedicated a small memory card to use for a personal photo experiment and over the course of a few days, I had taken seventy two frames. My exercise in mindful photography was born. I call it the "Two Roll Rule" after the thirty six exposure rolls of film I used to use when I started my photography business in 1995.

This is not your usual how-to photography article. It goes beyond that and talks about being really mindful of the photos you are taking and taking less, not more, to learn and improve your skills. It's a fantastic idea, and one I'd actually been thinking about. This article was share by Zoey Martin in the Shake Creative Challenge group and it fit really well with another article I read recently, by Zoey herself, about slowing down your photo taking. Both posts are well worth the read if you have even a passing interest in taking better photographs.


A digital detox isn’t about seeing the friends in your phone as wrong. I don’t actually think that most people are that addicted to their phone and notifications that it impacts the other parts of their lives. I think the problem needs re-framing. It’s about ensuring habits and people are sustainable and are the type of influence that you want in your life.

Vanessa expresses exactly how I feel about social media and it's 'troublesome impact' on our lives. I'm a firm believer that we should be our own masters of social media and if it's the other way around for you then you need to take steps to change that. It's also not that hard to remove much (but obviously not all) of the negative stuff that goes on in SM-land by exercising our right to click the unfriend, block or unfollow buttons.


The idea of a ‘circle of security’ has come out of attachment theory.  The theory states that an infant needs to develop a relationship with at least one primary caregiver. Such a caregiver becomes a safe base from which to explore the world and research with families has found even the most sensitive caregivers only get it right 50% of the time.  It’s known that secure children exhibit increased empathy, greater self-esteem, better relationships with parents and peers, enhanced school readiness, and an increased capacity to handle emotions more effectively when compared with children who are not secure.

This is a really interesting article about parenting and being emotionally available to your children. It's not talking about discipline, or doing stuff for them, or helping them learn, it's simply being there for your child, making sure they feel safe and secure with you. I highly recommend having a read of this.

When I went back to pull a quote from this funny post I couldn't get the blog up for some reason, but I am still going to include it in the hopes that by the time this post goes live things will be back to normal and you will be able to read it. These sayings are not exclusive to Indian parents and I think everyone will be able to relate to some of these and get a little giggle.


So that's it from me this week. Hit me up with links of your own in the comments and let me know what's caught your eye the last few days. And have a fabulous weekend!

Kylie Purtell said…
Sounds like a great weekend but smoke coming out of the STEERING WHEEL - that would have completely freaked me out - hoping the bill isn't too scary.
10 October 2014 at 20:55

Kylie Purtell said…
I'm looking forward to a bit of catch up after spending the week social media free. I still have a lot of tweaking with the blog merge but there is only so much of that I can handle in one stint and will be looking for some much needed distraction.
10 October 2014 at 21:30

Kylie Purtell said…
I forgot to include a link to the new and hopefully improved blog (once I find all my missing comments and fix a few dramas) http://agentmysterycase.com/2014/10/whats-new-pussy-cat-woah-woah-woah-oh.html
10 October 2014 at 21:32

Kylie Purtell said…
Smoke in the steering wheel - hoy shitballs! HOW SCARY. I loved that post from Rachel - I am so guilty of an all or nothing approach to photography. I have week where I take nothing and then WHAM far too many! xx
10 October 2014 at 23:46

Kylie Purtell said…
I'm catching up with the bloggy world after taking a three week leave of absence aka holiday. So I'm looking forward to seeing what I've missed so thanks for sharing your links :)
11 October 2014 at 16:18

Kylie Purtell said…
Hahaha my head hurts for you. Now I'm off to speed read all of your links before my laptop battery runs out. xoxo
13 October 2014 at 22:39