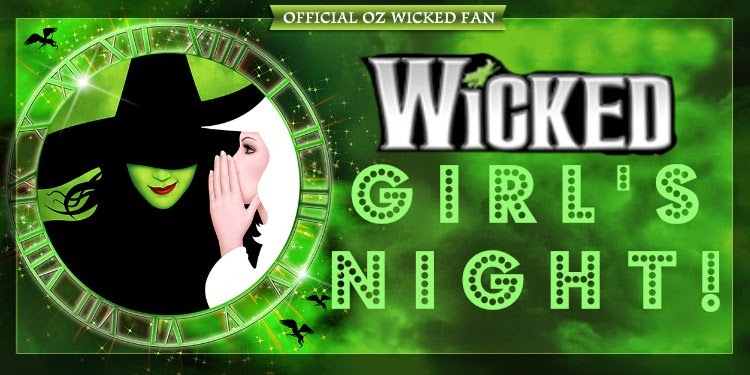 Friday night just gone I had a totally Wicked Girl's Night. Two of my old friends from high school have birthdays a day apart, so a long-overdue girls night was in order to celebrate. I say it was a Wicked Girl's Night, not because we were extremely naughty and up to no good, but because we went to see the show Wicked. Although, now that I think about it, there were a few shenanigans going on that some might have classed as 'wicked', particularly one poor man in the theatre...

To start the day I headed over to my girlfriend Kelly's place and picked her up so we cold catch the train in to the city. From there we grabbed a cab and hoofed it over to Newtown to keep a very important appointment. More on that in a later post.

After completing our business in Newtown we jumped in another cab and headed over to our apartment at The Star Casino. Yep, 6 girls in a 2 bedroom apartment on the 7th floor of the Casino. It was awesome. It's just a shame I was too preoccupied most of the time to bother taking any photos of our room!

We took a little detour to the food court on our way so that I could pick up a couple of boxes of goodies from the Adriano Zumbo patisserie. 8 individual Zumbo cakes was my birthday present for the birthday girls, and those bad boys were amazing! Made even more amazing by the fact that we consumed them at 2 o'clock in the morning straight from the boxes!

After a mad rush to get ready for our 6 pm dinner reservation we headed to the Light Rail and made our way to Surrey Hills and a little restaurant called Bar H. The food was an amazing mix of Chinese, Japanese and native Australian ingredients and I'm pretty sure we were all in heaven while we stuffed our faces. The wine was pretty good too!

After dinner we headed down the road to the Capitol Theatre and straight to the bar. After all, what is a girls night without cocktails right?! The extra wine and cocktail consumption at the bar didn't help one member of our groups cause though, as she had done a pretty good job of getting through the wine we'd had with dinner, and so by the time we made it to our seats she was verrrry happy! 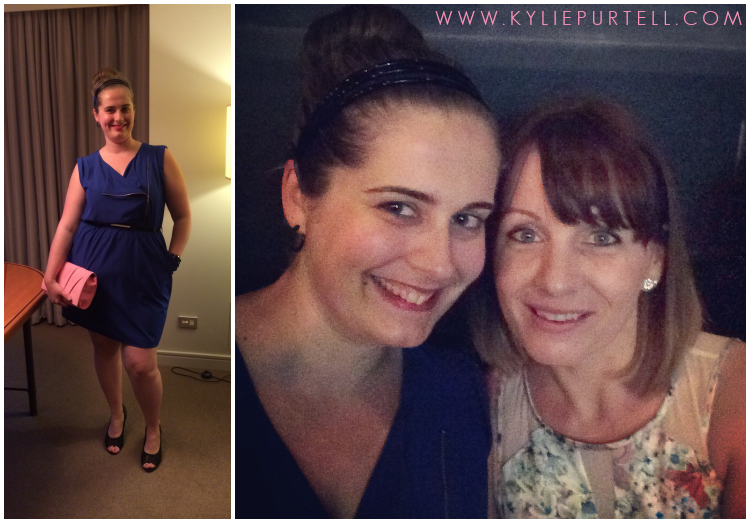 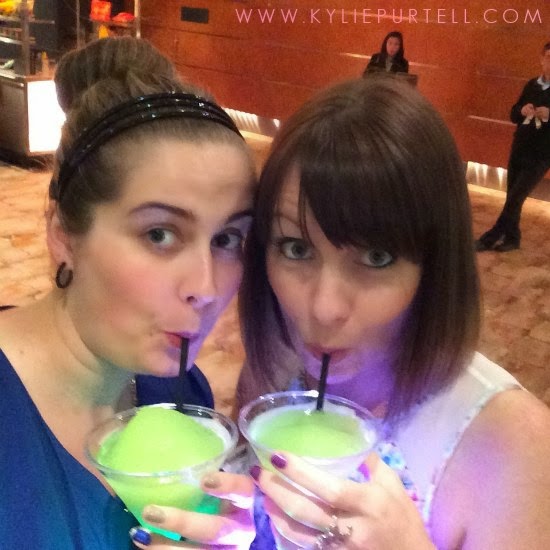 Let's just say it's a good thing we were sitting in the back row, because otherwise she might have pissed off a lot of people in that theatre. Personally, I cut myself off after the second cocktail because I hadn't seen the show before and I knew if I'd had one more I would not have been able to see anything through the blear!

The show was absolutely amazing! I've seen a looooot of shows and it was up there with the best. So good in fact that I'm hoping to get back and see it again before it closes. However the aforementioned friend didn't quite make it to the end of the show before falling asleep in the second half! I was sitting next to her and I suddenly realised that she hadn't moved in a while. I looked over and she was leaning perilously close to the man in the seat next to her.

Eventually the usher came over and asked us to wake her up and said she didn't mind if she slept, but she had to stop leaning over the man next to her! It was one of those moments where I really wanted to pretend she wasn't with us! While it was pretty hilarious to us girls, I'm not so sure the man next to her would have agreed. Sorry big guy!

After the show we were hanging around the side of the theatre, trying to decide what we were going to do next. Unbeknownst to us, as a couple of us were chatting about our options, our other friend was having a bit of a brain fart moment. Instead of asking or, you know, looking for a sign, she decided to just press a button that she saw on a pole. 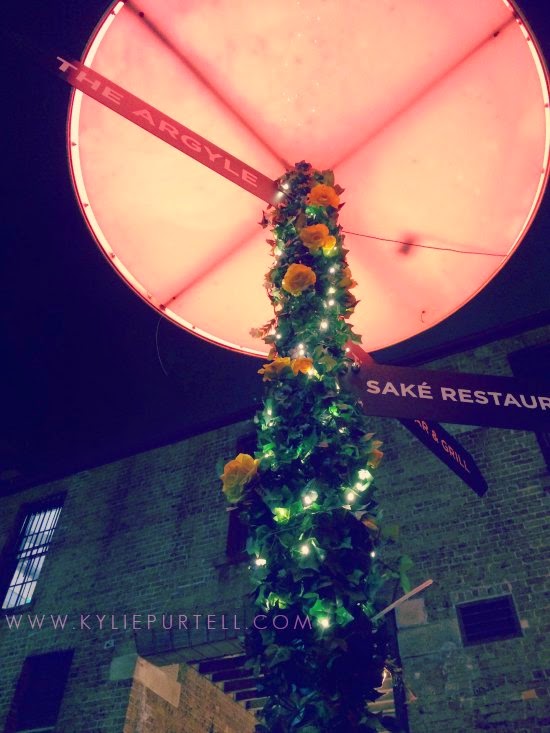 It turned out to be an emergency check-point and this voice blared out asking for her name and emergency. I've never seen anyone jump so high, or slink off so fast. After that it didn't take much deciding to grab a couple of cabs and head down to The Rocks and the Argyle for a few more cocktails and dancing.

That cab ride I had on the way to the Rocks is probably the funniest one of my life. I don't think I've ever laughed so hard in such a short period of time. I was in major danger of having to change my underwear by the time we got there, and I was clutching my stomach as we exited the cab. There's nothing like being with people you've known for close to 20 years who have the same weird, sarcastic sense of humour as you do.

We had the best cocktail I've ever had, The Roxbury, while at the Argyle. It was this fruity concoction you get by the jugful, and it's like a drink and meal in one. I was unashamedly eating the fruit from the bottom of my glass because I was so hungry by then I just did not care! We danced and laughed and just generally had an awesome time for the next couple of hours before heading back to our apartment.

Thank God for late night kebabs and hot chips, as well as those delicious Zumbo treats waiting for us back in the room. It was the perfect way to end an absolutely fantastic night. It's been so long since I've had a chance to go out and just let loose with friends and it was exactly what I needed.

Even if I did have to share a king-size bed with two other girls, one of whom was Miss Sleeps-a-lot-in-the-Theatre! Lucky she's hot!

Have you had a big night out lately? What did you get up to? When was the last time you laughed so hard your stomach hurt?

Kylie Purtell said…
Sounds like a great night! I'm looking forward to having one of these when Phoebe sleeps through the night. I loved Wicked too. Jacob and I saw it a couple of years ago when I was pregnant with Esther.
29 September 2014 at 13:33

Kylie Purtell said…
OMG OMG OMG those cakes.... I am HYPERVENTILATING. That seriously sounds like the best night, right down to the late night kebab and hot chips. Glad you have a great night out!
29 September 2014 at 17:53

Kylie Purtell said…
I'm so happy for you Ky - sounds like a fabulous weekend your besties.. but what of this tattoo I've seen you talk about on other blogs? Thanks for linking x
29 September 2014 at 18:16

Kylie Purtell said…
Time out with the gf's, how "Wicked"!! (Sorry about that) Looks like you made the most of it and you deserve that! Here's a bit of trivia for you - I was shortlisted to play Elphaba (the green witch) at Universal studios in Japan! Yep, the old musical theater boards were my thing pre Vicklets!! Great show hey? x
29 September 2014 at 19:55

Kylie Purtell said…
I think my biggest night out in recent years was probogger.. sounds like you girls had a great night x
30 September 2014 at 12:02

Kylie Purtell said…
Oh my goodness, you girls are hardcore! Looks like you had a really great night and those Zumbo desserts are worthy of lick-a-vision! I actually can't remember the last time I had a really wild or late night out. I'm a nana before my time!
3 October 2014 at 21:00

Kylie Purtell said…
You guys look like you had a wicker time... yeah yeah pun sorry about that. I havent been on a big night out for ages... I cant seem to stay awake long enough to do nights, but lunches, loooong boozy laugh till you cry lunches.... they are my thng ;) xx
6 October 2014 at 23:12

Kylie Purtell said…
You do some very, very cute things, Kylie. You make everything an occasion in a way that is so admirable. This would be such a fun night out!! x
8 October 2014 at 10:49