This time last year I was in my last week of work before going on maternity leave. On the one hand it feels like a lifetime ago, but on the other it feels like only yesterday.

On Tuesday my baby girl was 11 months. 1 month off being a whole year old! To say this has been the fastest year of my life would be the understatement of the century.
I think this last month I've noticed the biggest changes in her growing intelligence. She's just about got waving figured out. She waves hello when people show up at our house, but instead of waving goodbye she claps. It's very cute.
She's understanding so much more now, I can ask her questions such as "Where is Punky's nose?" or "Where is Mummy's nose?" and she points. I ask her "Where's Daddy" and she'll point to wherever Dave is. If I say "Kisses for Mummy?" or "Kisses for Daddy?" she leans forward and presses her mouth against your face. Sometimes she even makes a kissing sound as she leans toward you.
She knows my "What are you doing/What have you got?" voice now and she takes off in the opposite direction when she sees me coming and doesn't want to give up whatever she has (which is usually in her mouth!). 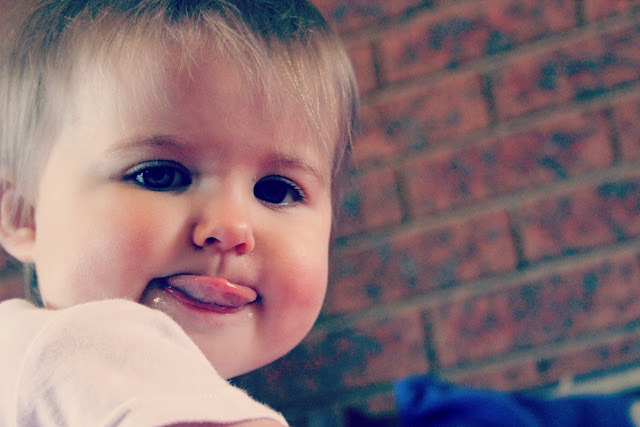 She gives me a cheeky smile when I say "No" and continues to do it, but if I go "Uh, uh, uh!" she stops whatever it is and then has a little cry coz she knows she's been roused on and shouldn't be doing whatever it was.
This month she has gained 2 more teeth, bringing us to a grand total of 6! The last one has given her quite a bit of grief, but she has handled it much better than she did with the first top two, she's such a little trooper.

She's also getting closer and closer to walking. In fact, she has actually walked all by herself towards me quite a few times, but hasn't worked up the courage to give it a go without Mummy in front of her to walk towards. I watch her get to the edge of the furniture and contemplate taking a step with nothing to hang on to, but then she catches me looking at he, gives her cheeky grin and plops to her bottom and crawls off.
This last month has also seen Punky start to self-settle at bedtime. We've got a really good bedtime routine going now and once all the steps are complete we have a little cuddle with the bedtime music playing, then I pop her in the cot and she rolls around for a bit before going off to sleep. I'm so proud that she has started doing this and also a little relieved to be honest. I had started to dread putting her to bed because of the tears but thankfully things are getting better.

She is still waking up at the crack of dawn, and not wanting to sleep a lot during the day, but I have come to terms with the fact that there isn't a lot I can do about it and to just go with the flow. There is no use getting annoyed or frustrated when she won't sleep later than 5 or 5:30am , or won't have a second nap in the afternoon, I just have to suck it up and roll with it.
Thankfully on those early mornings she is quite happy to play in her bedroom, so I pop her in there, safe in the knowledge that the room is completely baby-proofed, turn the baby monitor to face the mirror so I can see the whole room, shut the door and go and lie in bed to a more respectable after 6am time! Say what you will but even just an extra 10 minutes of lying in bed makes me a much happier Mum for the day, which makes for a much happier baby.

This time next month I'll be recovering after her birthday party and I'm pretty sure I'm going to be feeling a little emotional about it all. I never could have imagined that one person could bring me so much joy.

To celebrate her first birthday on the blog I am going to be posting a pic a day of my little munchkin, the first week will be pics from the first quarter of her life, the second week pics from the second quarter, and so on, you get the idea.

Today I'm sharing this post with the ever wonderful Grace a for Flog Yo Blog Friday and the fantabulous Bree for Flash Blog Friday.
Labels: My Family Punky

Housewife in Heels said…
I love this photo series Kylie!!! So cute. Enjoy the last month before your baby turns into a one year old!
26 October 2012 at 08:49

Ai Sakura said…
Aww she's so adorable and congrats on getting her to sleep better at night. Probably result of her not sleeping much during the day :p

J Bott said…
I love that photo with every month so cute. I think that the first year is so monumental to mothers, I remember thinking the same thing at 11month - wow I haven't worked for a whole year!
Eleise @ A Very Blended family
26 October 2012 at 10:25

Bright Shiny Apples said…
she is beautiful!!! And yup my year with the lil man has gone quicker than my daughters first year!! Can't wait to see the piccies xx
26 October 2012 at 10:33

Go Camping Australia Family said…
It's all going to go fast. The first year, despite the lack of sleep etc, is gone before you know it. May not feel that way some days, but as she approaches the 1 year milestone, it dawns upon you. Ditto that for every year thereafter!

I wish that when I had my babies, I had a more detailed record of their lives, like you do with your daughter and the blog. I thought "I will remember this event/moment/saying", but I haven't.

Great job on recording these moments (and what a great idea with the outfits at the top of the page. Damn. Another thing I wish I'd done!!!)

Tivoli2moro Tween and Teen Fashion said…
Gorgeous post Kylie about a gorgeous girl. What a great 11 months.
26 October 2012 at 19:31

Enid Bite'Em said…
Gorgeous photos - you're right, it does go super quickly and it's even worse with my second - we have been known to call him 'ninja baby' - because we blink and he's clothes suddenly don't fit him anymore :)
26 October 2012 at 19:57

Kylie Purtell said…
I think you're probably right! And although it's tough when she gets sooky I'll take better sleep at night over more day sleep every time!
29 October 2012 at 20:43

Kylie Purtell said…
It truly is monumental. It boggles my mind to think of all the things she is yet experience in life and how new everything must seem for her and does seem for me.
29 October 2012 at 20:43

Kylie Purtell said…
My friend gave me the stickers to use for the monthly photos and I'm so glad she did, it's turning out well.
29 October 2012 at 20:45

Kylie Purtell said…
Thanks Josefa! The year certainly has been passing so quick. I'm trying to remember to take a moment each day and just marvel in her and soak it all in.
29 October 2012 at 20:45

Kylie Purtell said…
Thanks Annie! It's funny how when I look back over the last almost year there were so many moments where I felt like the hard parts were never going to end, but now that I am here I almost want to go back to those small baby moments and re-live them again so I can appreciate them more.
29 October 2012 at 20:47

Kylie Purtell said…
Yep, you're totally right, my Mum said the same thing. It's amazing how grown up she has started to look, not quite a baby anymore but not quite a little girl just yet either.
29 October 2012 at 20:52

Kylie Purtell said…
Thanks Bree. I love the stickers, my friend who got them for me is going to get me some for the next 12 months as well. Can't wait to create all new collages.
29 October 2012 at 20:53