(Not So) Wordless Wednesday - Punky's Bedroom

I had a few requests from people to do a post on Punky's bedroom so finally, after taking these photos two months ago, I have gotten around to posting this! I did some progress posts back while I was pregnant but never showed the finished product so here it is! 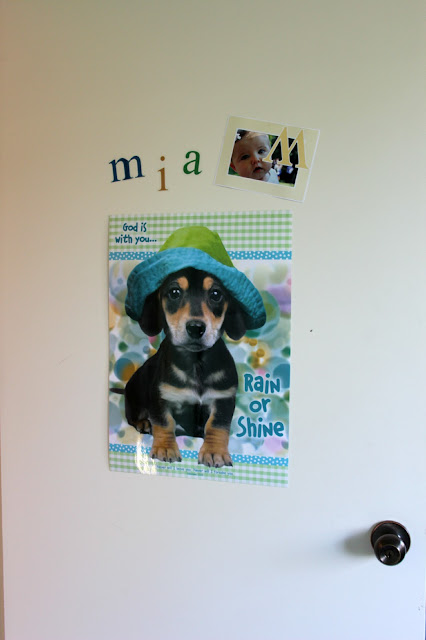 Punky's bedroom door, the poster was a gift from my cousin at Punky's Baptism, the letters were left over from the alphabet stickers around her bedroom walls and the photo holder Mum got for free from a scrapbooking place in Penrith when we went over there looking for wedding invitation supplies.
Every morning Punky says good morning to the puppy and goodnight before bed and gives him a pat.
It's so cute! 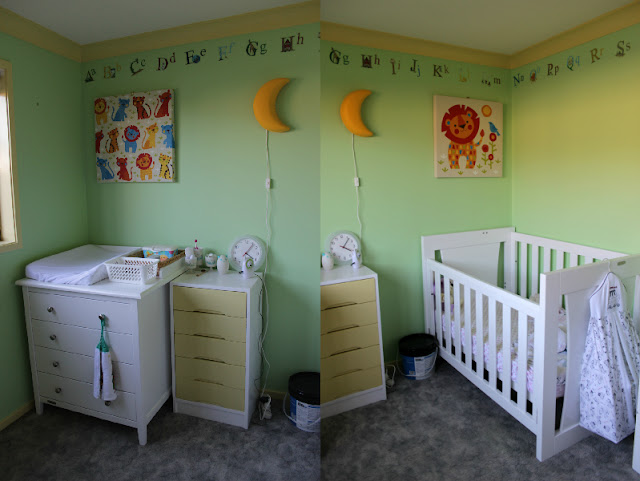 For some silly reason I didn't take a shot of the entire wall so you could see it all together so you'll have to use the above pic and you imagination! 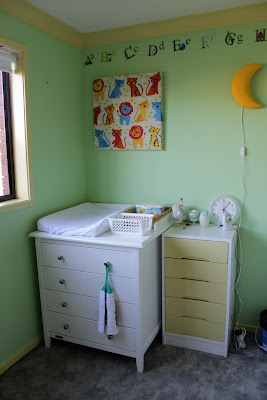 The big chest of drawers doubles as the change table, and the beauty of it is the extension on the back can be removed once it no longer needs to be used as a change table so it sits flush against the wall. The smaller chest of drawers was my Mum's when she lived at home and she took it with her when she moved out at 17. The drawers have been used for each of us kids and been painted a lot of different colours. They were blue when I got them. (The powerboard and cords are now sitting on top of the chest of drawers, I took these photos before we did all of our baby proofing!) 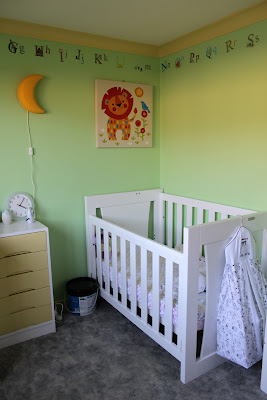 The cot matches the chest of drawers/change table and we bought them at the same time from My Baby Warehouse, I think all up, including the cot mattress, we paid about $1000 on sale, which was a pretty good deal. Baby furniture is ridiculously expensive so it was important to get stuff that would get many, many years use and wouldn't just be restricted to the baby years. The good thing about the bed too is that it is a 4 in one, so it also converts to a toddler bed, a day bed and there is extensions to make it into a full size bed also. We have spare single mattresses so when the time eventually comes we have another full size bed ready and waiting. I think the brand is Grotime. The nappy holder hanging on the end of the bed is a Noah's ark theme and matches the sheet set and waffle blanket. 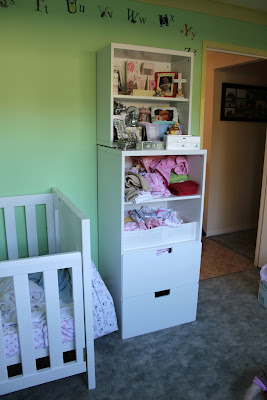 The cupboard unit above is from Ikea and the beauty of that is that you can have any configuration you want, all drawers, cupboard doors, open shelves. The two open shelves, two drawers configuration suited our needs best, the bottom drawer has toys and the top drawer has all the blankets and wraps. 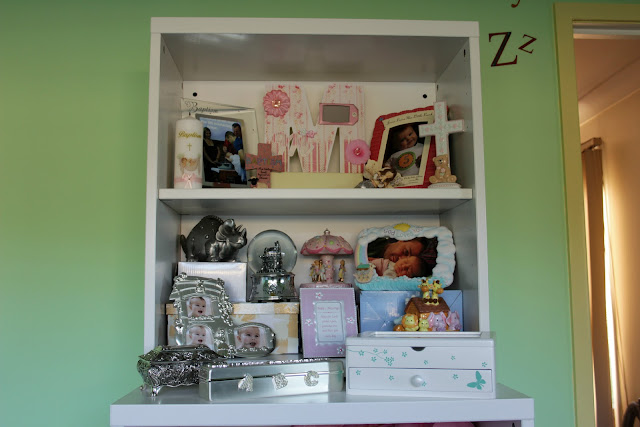 These shelves are also from Ikea and can be mixed n matched and they can also have doors and be wall mounted. I have all of the precious stuff that Punky was given for her Baptism on there, including her jewellery box and some pretty photo frames and her carousel, snow globe and dinosaur money box 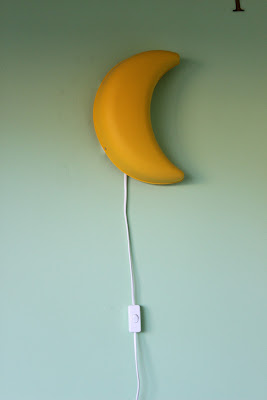 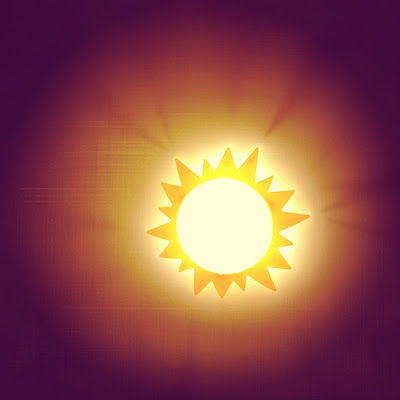 This is the light shade on the roof, also from Ikea. It is very cool, but I did have to get my sparky BIL to install for us as it has three lights rather than the standard one and it required a bit more wiring skill than Dave or I possessed. At first I wasn't so sure about the yellow tint it gives off but it's grown on me now and it really suits her room. I love it. 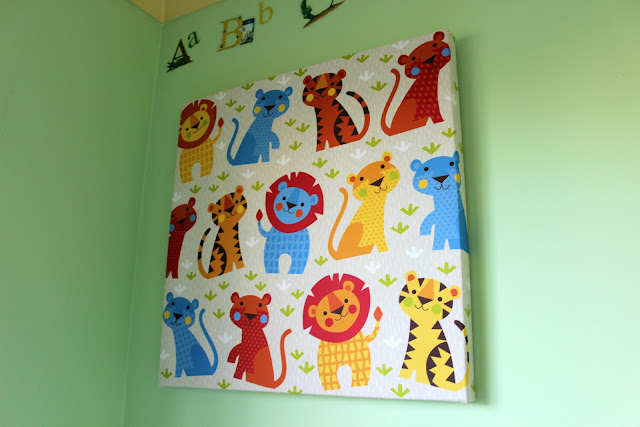 The following two canvas artworks were given to us by my Dad and step-mum before Punky was born but we only put them up a few months ago as there was just never a good time when she was little but they really complement the room well and fit the fun, bright theme I was going for. I'm not sure where exactly they got them but I do know it was down on the NSW south coast. I'll find out and update this post though once I know. 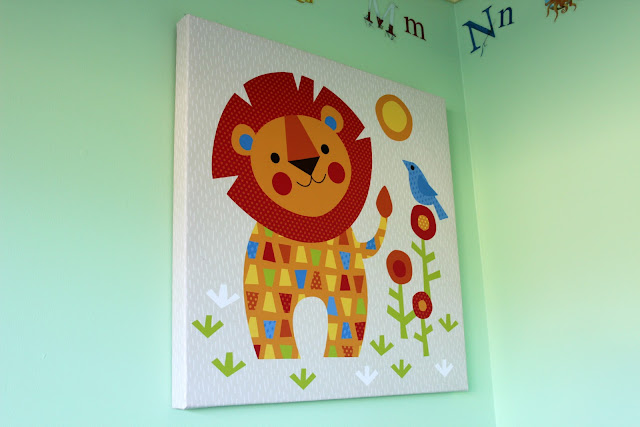 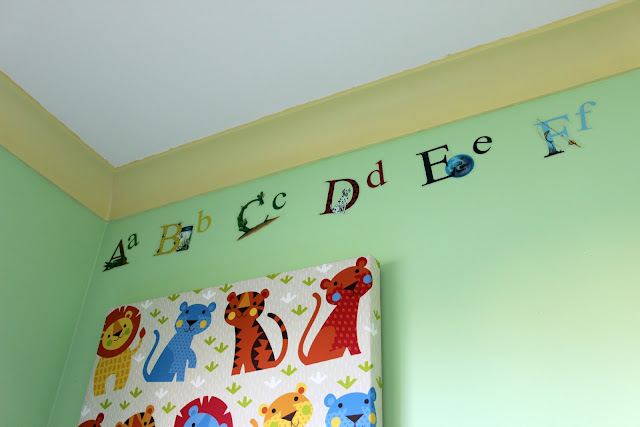 Just under the cornice, around two of the main walls are alphabet stickers. I ordered these off eBay after searching for weeks for just the right ones. A lot of them are really small and I wanted ones that were a little larger so that I could put them up at the ceiling line. These aren't too big but not so small that you would need really good eyesight to tell what the letters are. 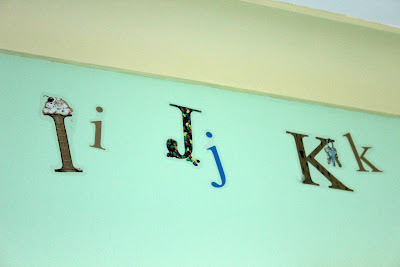 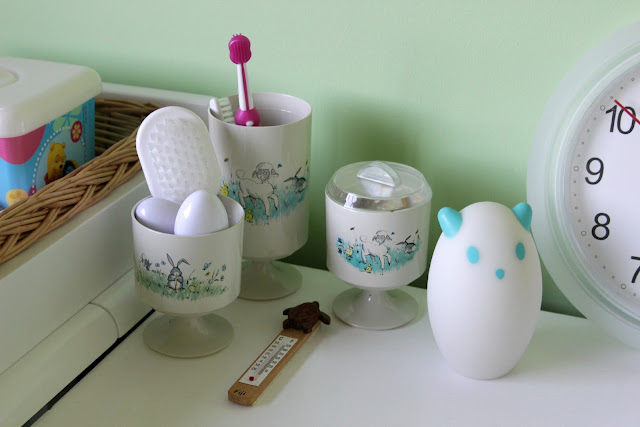 The little three cup set my Mum bought for my room when I was a baby and now they live in Punky's room. I have handy stuff in them, like nail clippers, a brush and other little bits and bobs. The thing with the green ears, eyes and nose is a colour-changing light which I also got from Ikea, it's very cool and Punky loves it. There is also a short round one but that has ended up in the toybox somewhere as Punky just loved to play with it so much. They run on a re-chargeable battery and you plug the charger in to the back of it and last for something like 10,000 hours. The thermometer has a sea turtle on it and we got that in Fiji on our honeymoon and it came in handy last summer to see how hot her room was getting. 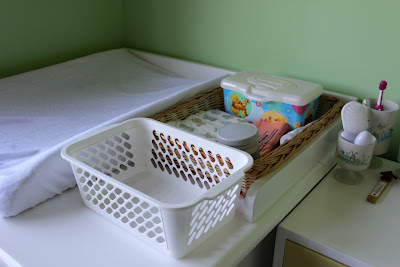 I use a plain old white basket to put rubbish and hold the dirty nappy in the nappy sack while I am in the process of changing Punky, and everything I need for nappy changes sits in the brown basket, given to us filled with gifts at the baby shower. I was given a Huggies Newborn Baby Pack with nappies and the wipes container you can see but I re-fill it with Aldi wipes as I like them the best. They're not too thin or thick, not too wet or dry, they're just right. Like the cereal. 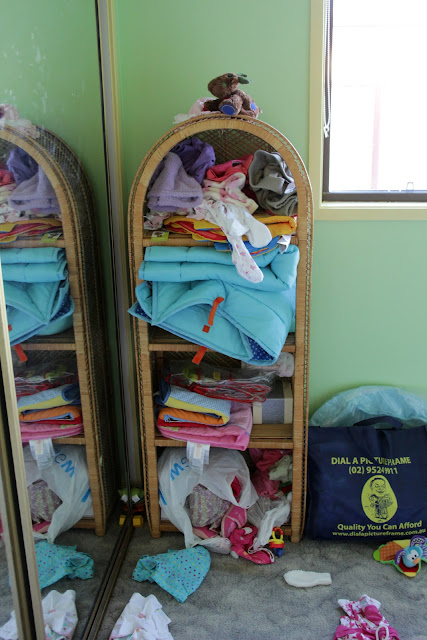 The cane shelves have also come from Mum, and at the moment it holds misc stuff that I don't have a place for elsewhere and as you can see, Punky loves to pull everything off it. I'm hoping soon she'll like putting things on it! Her room also has a big double built-in wardrobe which houses all her dresses, as well as half of mine and a lot of Dave's clothes too! There is also other stuff stored in there that will need to be taken out and either housed in the spare room or thrown away as Punky gets older and has more stuff that needs to be stored.

So that is Punky's room. My Mum and sisters painted it green and yellow for us when I was about 34 weeks pregnant after Dave and I argued for weeks over what colour it should be. We wanted something that would be good for a girl or boy, and something that was bright and cheerful but not overly garrish. The pictures don't do it justice, in fact the pictures make it look closer to blue than the nice green that it is but you get the point. I wanted to paint the walls yellow and the trim green but Dave thought that would be too girly if we had a boy so I let him win that one. If he'd had his way we wouldn't have painted the room at all and it only got done coz my Mum and sisters did it for us! They did a fantastic job too, so thankful for that.

There are still a few more things I want to do in her room, and a few more pictures I'd like to hang that my  Mum and Dave's Aunty gave us but I might save some of those for when we have a new baby and do the other spare room up. When I get a chance I'll take a panoramic shot with my iPhone and upload it next week so that you can see the room and get a feel for the layout. It's the biggest bedroom in the house and these pictures really don't give you a sense of scale.

So tell me, did you go to much trouble when it came to preparing a room for your baby/ies? Did you have a particular colour scheme or theme in mind or were you all about the neutrals and keeping it simple?

Emma said…
Looks great! Love the colours and all the animals; makes a nice change from the overdone princess theme :) I'm a bit slow in this department too - my daughter's room was more a storage room for the first few months. I've got it organised now but still not prettied it up. One day!
24 October 2012 at 12:41

Ai Sakura said…
thanks for sharing! I love the shelf with all the precious memories collected :)

Lovely room. I made a sun out of the ceiling light in Boo's nursery! And as you know I ADORE your daughters name. ;)

Anonymous said…
You look like you have the same love of organisation as Mrs Illiterate Infant. Be keen to find out where the lion picture came from if you ever find out.
24 October 2012 at 16:31

Newaged Hermit said…
Very lovely room! Oh I hope this baby is a girl I would love to play with designing a girls room! Fab room for little Mia!!
24 October 2012 at 17:41

Kylie Purtell said…
I hate all the princessy stuff, I was never in to it as a kid so hope Mia won't be either. Mia's room was a dumping ground for so long before we got around to clearing it and we definitely had a lot of stuff still in there even after she arrived. I don't think it matters too much in those first few months though, they have no idea, thankfully!
25 October 2012 at 10:36

Thank you! I think every kid should have a sun for their light. And Mia is a pretty awesome name, for daughters and hard drives alike!
25 October 2012 at 10:38

Kylie Purtell said…
I do love to have things organised, but weirdly at the same time I am very lazy. Its a total contradiction!

I spoke to my Dad, they got the canvas' from a shop in Milton, but they can't remember what it was called. If you're ever there though I can't imagine it would be too hard to find, Milton isn't the biggest place and it's an excuse to shop (which you may or may not care about, that might be best left to Mrs II!)
25 October 2012 at 10:40

Kylie Purtell said…
I had a lot of fun thinking and dreaming about this room. If only I had had pinterest then! I can't wait till we have a second baby, I am gonna pin the shit out of ideas for the next ones room!
25 October 2012 at 10:40

Kylie Purtell said…
Thanks Tamara! I figure it's the little things that make the room special.
25 October 2012 at 10:41

Kylie Purtell said…
Lol, I so knew you were gonna say something about that! I did preface it with Not So, that has to count for something!
25 October 2012 at 10:41

Anonymous said…
You're right about the allocation of shopping tasks. I've just check where Milton is and I see a summer holiday mission coming on
25 October 2012 at 14:08

E. said…
Great room. We didn't do rooms up for our kids when they were babies. The most we did was strip back a cot and repaint it when Boy was a baby and paint their rooms the colours Boy chose when I was pregnant with Girl Child.
26 October 2012 at 08:15