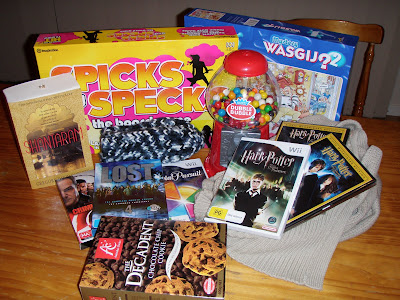 1982 - Princess Diana gave birth to her first son, Prince William, second in line to the throne, after his father, Prince Charles. He was the first heir to the throne to be born in a hospital, not in a palace.

2003 - J. K. Rowling's Harry Potter and the Order of the Phoenix was released. At 8.5 million copies it was the biggest first-run release of any book in history.

(Source: On This Day by Sandra Kimberly hall, Published by New Holland)

And... I was born! That's right, today I turned 27, the shortest day of the year! When I was little I used to think that because Prince William and I were born on the same day it meant that we were destined to be married! My mum was just happy that she beat Princess Di by a few hours!

Had a lovely weekend, friday night dinner with my old school friends, spent Saturday with hubby, he took me shopping for birthday pressies (no sewing machine but I have some money for one!) and then we saw a movie, and today I spent the day having lunch with mine and hubby's family and wandering through the markets afterwards enjoying an ice cream from the ice creamery. All in all a lovely way to spend a birthday!
(And I got pressies! That's my haul at the top of the page!)
Labels: Life

Yes, I am lucky enough to have my birthday on the shortest day of the year...no pool parties for me! One day I would really like to spend my birthday in the northern hemisphere and have the longest birthday ever!
22 June 2009 at 18:01