Grief and the passage of time | Life 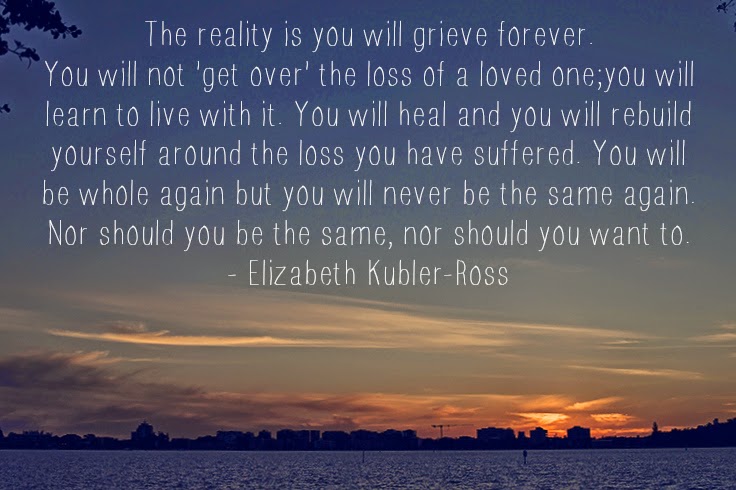 She would have been 37 today. But she'll forever be 29 in our hearts and minds.

Maybe she would be married. Maybe have children. She might have done so many things if it wasn't for the car accident that took her life too soon.

It's a funny thing, grief. As the years roll on the immediacy of it lessens. It's hold on your thoughts and feelings slowly sinks through your body and brain until it's not something that you think of every day. It becomes a part of you. Always there. Just not as acute as the first days and weeks after it happens.

I sometimes wonder whether it's better to know in advance of Death's coming. You can prepare for it, in some small way. But it doesn't lessen the shock, or the grief when it eventually comes. It gives you a chance to say goodbye. To savour the last moments of hugging and kissing a living, breathing person. But I'm not sure that it makes it any easier.

Before she died, we hadn't spent as much time together as we had in my teen years.

In my teen years she was one of my best friends. She was older. Someone I looked up to.

She was truly the big sister I never had.

And then she moved away and we didn't see each other as often. There were wounds. On both sides. Things we didn't talk about but I know we both felt. I missed her. I missed having someone so close that I could talk to and pour out my innermost fears to.

There were times in my life when she was there for me in a way no one else could be. I told her things that to this day I've never told another soul. She helped me through one of the hardest times of my life. Those late teenage years when everything is so confusing. The fears, the doubts, the hormones that can be so overwhelming and all consuming, and throw everything out of perspective. She gave me back my perspective. If it wasn't for her I might have slipped away in to my depression completely and the road back would have been a long and arduous one if she hadn't pulled me back from that edge, if she hadn't stopped me from falling too far.

Before she died we had slowly started to reconnect. Facebook was still a new thing in those days. But it was the thing that allowed us to communicate in a way that we hadn't been able to since she'd moved away.

Two days before it happened I sent her a message in reply to one she'd sent me. I told her how much I missed her. How much I missed seeing her. The fun. The jokes. The hugs. The laughter. The love. I told her that I hoped we'd be able to catch up soon. That I was keen to introduce her to Dave, the man I was to marry in 7 months time.

She never did write back.

Because two days later she was gone.

The phone rang. It's funny how sometimes, when the phone rings, you just know. Whether you've been expecting it or not. You just know. I knew when my phone rang, and I saw that it was my cousin calling, that the news she had for me wasn't good. It was the same feeling I got when I received the phone call about Mum's accident last year. When my sister called to tell me Grandma was gone.

I wonder if we could have restored our friendship to the closeness we'd once had if she hadn't been taken so abruptly from our lives. I killed myself with that question in the months directly after. But I figured out pretty quick that thinking those thoughts and asking those what ifs is a slow, horrible form of torture and does no good to you or your memory of that person.

All you can do is remember the good times. Be thankful for the fact that you got to spend what time you did with them. Throw off the guilt and embrace the love they left behind. The love you know they had for you, in spite of all time and distance. And believe that they knew it too.

In the grand scheme of life, the time that I called her Best Friend was short compared to others. But she had no less impact on my life, and I will forever love her and be thankful that she embraced me like as family, and was happy to take on the role of Big Sister to me when I felt I had nobody else. She truly was family, right down to the golden cross she wore around her neck, that my Grandfather made for her. The family cross. The same one he made for all of us for our Confirmations.

She's been gone for just over 7 years and the grief of her loss is still there. Will always be there. But it's the love and friendship that we shared that makes it bearable. I don't think there will ever come a day when I can think of her and not feel that solid lump form in the back of my throat.

The ones we love and lose may be gone from this earth but they will always be with us. Living in that secret part of our hearts that keeps their spirit alive.

Happy Birthday Aimee. I love you. I miss you. I thank you.

Emily said…
Grief sucks. Big-time. That's my favourite quote about grief (if you can have a favourite quote about something like grief). And I agree that grief becomes a part of you. I too have wondered if it's better to know. My mum remarried later in life. Our dad died suddenly; our step-siblings' mum died after years battling cancer. Years, remissions, relapses. I think neither is better. It's all just different, and it all sucks.
Thinking of you today x
28 April 2015 at 15:37

Natalie @ Our Parallel Connect said…
As the years move on... People who were not close forget, believing it gets easier. But with every milestone, special event, anniversary it only makes you realise they will never be by your side to share it
28 April 2015 at 18:43

Vicki @ Knocked Up & Abroad said…
Grief certainly does linger and become apart of you. This is such a heartfelt post. Hugs xx
28 April 2015 at 22:25

Shannon @ Dash of Tonic said…
I had a lump in my throat reading this Kylie. My little brother will always be 15 in my mind but would have been 31 tomorrow. It's common to ask the 'what ifs' when we have loved ones taken too soon.


The description of your friendship with Aimee really strikes a chord. Her time as your best friend may have been short but she still had a huge impact on your life. I firmly believe that people come into our lives for a reason, no matter how short the time. Even if we drift apart - there's no doubting the impact that some people have on us.
28 April 2015 at 23:04

Tash @ Little Bit of Thyme said…
Just said so beautifully. Grief is as much a part of you as that person you have lost is a part of you. Big hugs and a wonderful tribute to your big sister. xx
29 April 2015 at 00:39

sammie@theannoyedthyroid.com said…
What a beautiful post, Kylie. I agree, I think that grief becomes part of you. Thinking of you and sending you big hugs xx
29 April 2015 at 07:21

EssentiallyJess said…
I'm so sorry for your loss Kylie. She sounds like an amazing woman xx
1 May 2015 at 14:57