The Art of Over-Committing 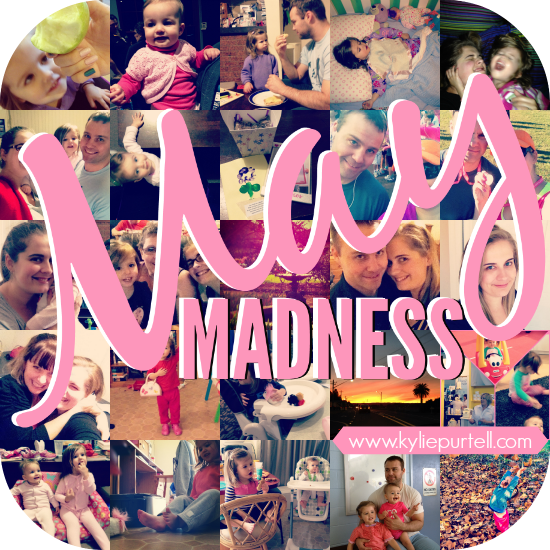 May has just been mad. Like really, really mad. We have had so much on and I feel like the month has just evaporated faster than a puddle on a hot summers day. It's gone so quick that I haven't done Zee's Nine Months post and I am feeling super guilty about that. Talk about Second-child Syndrome.

That's totally a thing too!


This month of course saw Dave and I run in the Mother's Day Classic. To say my training for it was lackluster would be an understatement. For some reason, after the bathroom renovation and the forced break while it was happening, I couldn't find my running mojo and I basically did no real preparation.

Still managed to do the 4kms in under 40 mins though so I am pretty happy with that.

A funny thing happened though, after doing the run. My running mojo came back with a vengeance and since then I have either gone for a walk or run just about every day since. I've been feeling really good, and on Sunday night I actually managed to run for 20mins non-stop on the treadmill.

Aside from all the running and walking, I have also signed up and been attempting to undertake the Blog with Pip course. I say attempting, because week 3 has just started and I haven't even finished going through the bloody week 1 lessons! I am so far behind!

Thankfully I still have access to all of the course work for a bit afterwards so I can keep working on it for the next month or so. Phew!

On top of all that I was busy organising my Bloggy Birthday Bonanza Giveaway (have you entered yet?) and making sure that everything was running smoothly on the blog. As well as spending time sharing the love over on Facebook.

And then yesterday, I was lucky enough to go to Sydney restaurant Otto for a delicious lunch with none other than blogging superstar Chantelle from Fat Mum Slim. It was an awesome day, filled with delicious food and lots of fun playing with a new camera that's just hit the market.

On top of meeting Chantelle I also met some other fabulous blogging ladies like Jackie, Trish, Tessa, Leanne, Lisa Jane, & Sammie, and spent the afternoon talking all things photography, food, kids and life. It was a fabulous day and I am so incredibly thankful to Chantelle for choosing me to be a winner of this special giveaway.

With all of this going on I have barely had time to get any Tafe work done, and as a result I am so behind. So if things seem a little quiet on the blog for the next couple of months it's because I am either running or designing. I need to make those two things a priority and so there may be weeks where there is only the Tuesday IBOT post up here.

I will still be hanging out heaps on Facebook, Instagram and Twitter of course, I couldn't limit all my blogging and social media so you probably won't even notice! I may however schedule some posts, and I have a couple of guest posts in my drafts folder that I have been promising people for weeks (sorry if you are one of those people, I promise I will get to them asap!) that I will bash out before my self-imposed blogging limitation.

Of course there is still also the usual life stuff of being a wife and mother and pretending to keep my house clean. So I got a bit going on, but I am trying my best to clear as much as I can so I can get back to blogging ridiculously often!

And so that is what the hell has been going on in my May Madness. How's you're May been? Do you have a habit of taking on too much and not saying no?

Linking up for IBOT with Essentially Jess

Kylie Purtell said…
Great for you! What a lot. And that lunch sounds lovely (perfect day for it no less). Our May is chaos with family commitments every weekend. I am glad when it's over!
27 May 2014 at 07:06

Kylie Purtell said…
What an incredible month. I saw your photos in IG yesterday and the lunch meet up looked incredible!
27 May 2014 at 07:10

Kylie Purtell said…
I am the queen of over commitment. Although my daughter's recovery from surgery has forced me to have a relatively quiet May ... so mine is less mad. And you know what ... it's kinda nice!
Leanne @ Deep Fried Fruit
27 May 2014 at 07:18

Kylie Purtell said…
Oh pick me for the leader of overcommitters anonymous, you know because I don't have ten thousand other things I have already said I would do!

Kylie Purtell said…
I hear you. I've made a real point of not over-committing lately. We'll see how long it lasts!
While crazy busy, it all sounds like fun though. I hope you get back up to date with the blogging course because it sounds fab!
27 May 2014 at 08:17

Kylie Purtell said…
I have really had to start putting my foot down when it comes to life. Good luck with the next few months, you will be fine!!
27 May 2014 at 12:53

Kylie Purtell said…
Oh my goodness I can hardly keep up just reading all of this. May is definitely the month of madness. Best of luck Kylie. Intrigued to know about blogging course.
27 May 2014 at 14:19

Kylie Purtell said…
Everyone seems to be super busy at the moment! Except for me. I feel quite calm but I had a crazy start to the year, so it balances out.
Yay for all your goals though. Loving the graphics and stuff you are designing. You're doing a fab job Kylez xx
27 May 2014 at 14:50

Kylie Purtell said…
I think of all the bloggers I've ever read, I'd be most "star-struck" for lack of better term, meeting Chantelle! Sounds like an awesome afternoon! And I've learned the funny thing about running is that the more you do it, the easier it gets, and the easier it gets the more enjoyable it is! But getting started is the HARDEST part! x
27 May 2014 at 19:08

Kylie Purtell said…
My May has been mad too...so busy. I feel like I am continually playing catch up. Sounds like you have been up to some great stuff. That's great about your running. I run too. Love it. I was thinking about training for the 1/2 marathon in June, but not sure if I will quite get there with all this madness going on. xx
27 May 2014 at 21:15

Kylie Purtell said…
May has been a bit of a corker mentally for me but things look like they are looking up a bit. I hope that things start to settle down for you soon!
27 May 2014 at 21:23

Kylie Purtell said…
It is so easy to let life get out of control. I am really trying to keep a handle on things, but just like you, it's in my nature to over commit. That is awesome you are so into your walking! You've really done well. Oh and so jealous about you meeting Fat Mum Slim. What an awesome experience!
27 May 2014 at 21:48

Kylie Purtell said…
Phew I'm exhausted just reading all that!! Go you!! I'm super jealous that you're actually managing yo get so many cool things done, even if you are a bit behind!!! I need to get my arse into gear me thinks xx (great photos too btw) xx
27 May 2014 at 21:54