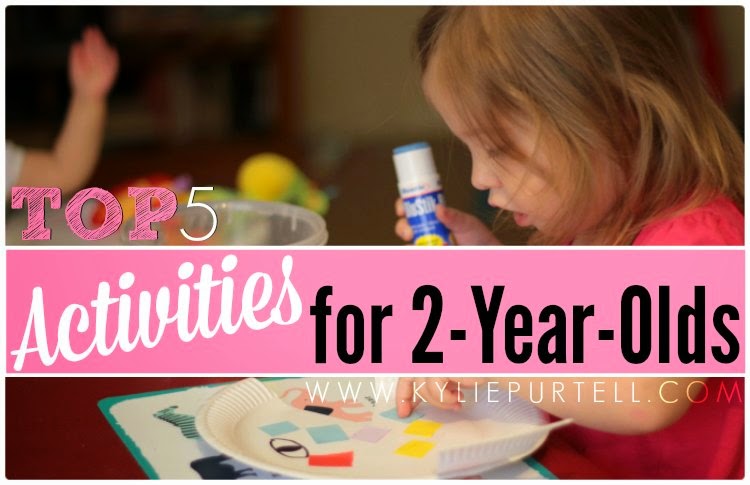 It's no secret that I'm a bit of a lazy girl. Ok, a lot of a lazy girl! I hate anything to do with housework and cleaning, and if there is a shortcut, or easier way of doing things, I'll find it and take it!

This sadly, for my daughter, also applies to kids activities. Especially now that I have a baby to look after as well. I don't have time to be setting up elaborate craft and other such activities, and I certainly don't have the time or the inclination to be doing a lot of cleaning up afterwards.

Which is why I have made it my mission to find 2 year old crafts & activities to do with Punky that are easy and simple to set-up, with minimal mess, fuss and cleaning afterwards. A happy toddler makes a happy mother, and a mother who doesn't have to clean up more mess than necessary is even happier!

So today, I present to you my top 5

(and Mums who don't want to clean up the mess afterwards!) 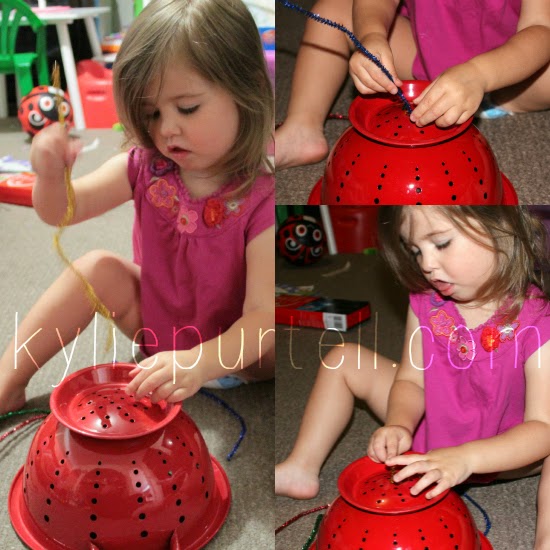 2 year olds love to thread stuff. Well, my 2 year old does. She will happily push stuff through holes for ages. This activity is great because it requires minimal equipment and makes minimal mess. All you need is a packet of pipecleaners and a colander. Sit your toddler down, let em' have at the bag of pipecleaners, maybe poke one or two through the holes of the colander and there you have it. An activity that will hold their attention long enough for you to go pee by yourself, and maybe even clean-up the kitchen after breakfast.

I have the Housewife in Heels to thank for this idea, I saw her boys doing it in one of her blog posts and thought it was genius. The only mess to clean up is the pipecleaners off the floor which you can do when you pack up all the other toys at the end of the day. 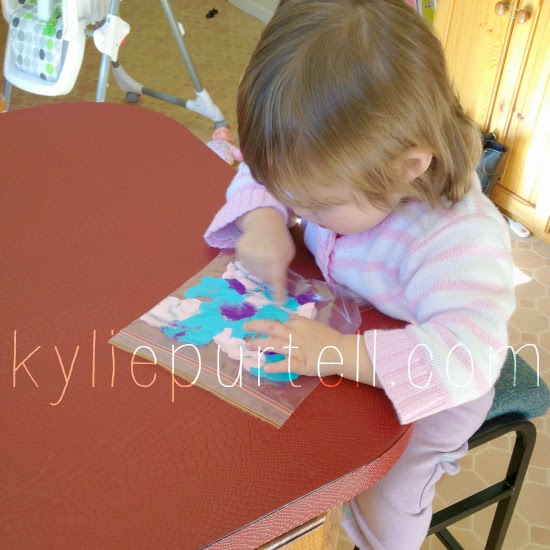 I've seen this on a number of websites since I first discovered it on Pinterest and it is gold! The first time I did it with Punky she was a little confused and couldn't understand why there was no paint on her fingers, even though she was "touching" it.

This activity is great because they get the joy of painting, and you get the joy of having no paint to clean up. All you need is some large zip-lock bags, a piece of paper and some paint. Put the paper in the zip-lock bag, put a couple of squirts of paint in and seal the bag back up.

Now sit back and watch your toddler push the paint around inside the bag and decorate the paper. Be warned though, that the paper can sometimes be hard to get out, and may smudge in the process. Alternatively, you can leave the paper out of the bag and just have it sitting underneath on the outside. There won't be a painting to keep at the end (which some of us with masses of toddler craft floating around might say is a good thing!), but they will still be able to see the way the paint is swirling and mixing in the bag easily. 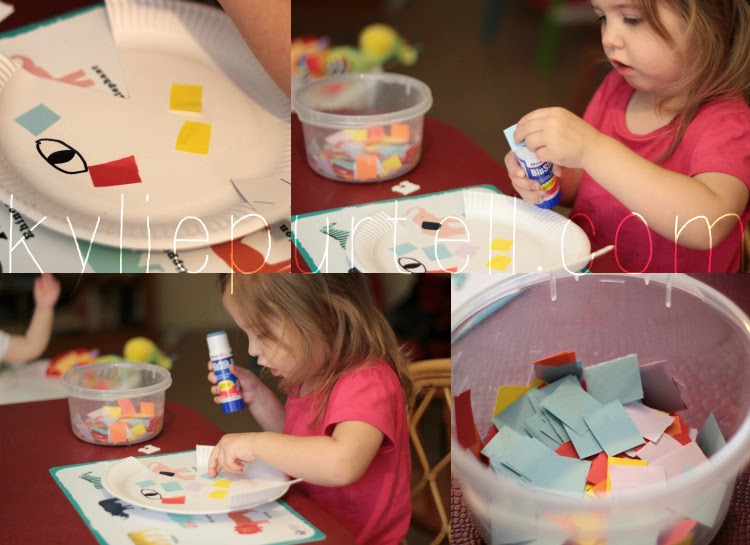 I got this idea from the preschool that Punky goes to when I picked her up the other week. They had been making undersea creatures and decorating their own fish. When I saw how easy the fish were to make I thought it would be the perfect easy activity to do at home.

All you need is some paper plates, coloured paper, scissors and glue (staples are optional). Cut a wedge(triangle) out of the plate, like you would cut a piece of cake. This will become the tail. Staple or glue the wedge to the opposite side from which you cut it out, with the wider edge off the plate and there you have your fish! Alternatively you can just cut the fish shape out of any cardboard you have lying around.

Cut up squares or other shapes out of the coloured paper and put them all in a container. Sit your toddler down with the glue stick and away they go, covering their paper-plate fish with lots of colourful paper scales. You can draw an eye and some fins on the fish too if you like.

This activity kept Punky occupied for ages and there was minimal mess to clean up at the end, just a bit of glue on her hands and the bench. I also gave her a blu-stick to use, where the glue goes on blue but dries clear, this made it easier for her to see where she had put the glue if she wanted to glue the fish first and put the scale on that, but mostly she preferred to wipe the paper scale on the top of the glue stick and then put it on the fish.

Just make sure that whatever paper scales are left over you put well away, out of reach of your toddler. Unless of course you want your lounge room to look like a confetti factory exploded inside it! 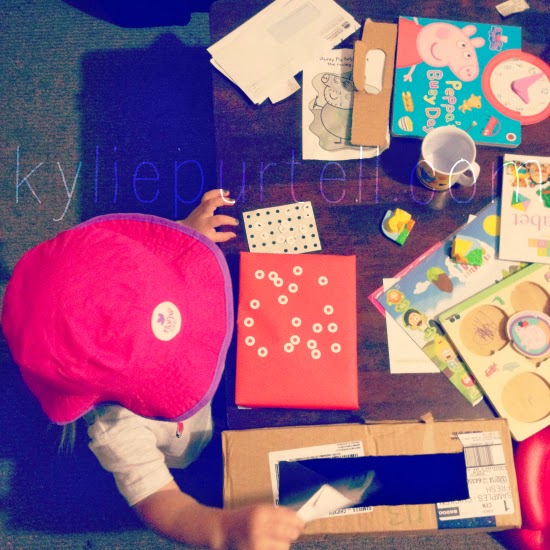 This activity indulges a toddlers love of posting, ie. pushing stuff through other stuff. For this one you'll need a cardboard box, a box cutter, sticky tape and old envelopes.

I used one of the boxes that the truckload of turkey arrived in. It was a nice long rectangular box and I simply taped it closed, cut a rectangle in one end large enough to push envelopes and parcel packs through, and a much bigger rectangle in the opposite end, to easily empty out all the stuff that had been posted.

Once done I just taped closed the envelopes from some bills and away we went. Punky had a grand old time mailing her letters and catalogues. She also mailed plain old pieces of paper, a small parcel box I'd gotten my new diary in, as well as anything else she could find to fit in the hole.

Not only was she entertained posting her letters, she also had a good time experimenting with what toys and other objects around the house would (or wouldn't) fit through the slot. There is minimal mess to clean up, and once you've done the initial work of making the letterbox and collecting a few envelopes to use as mail, it's an activity that can be easily put away and bought out again another day. 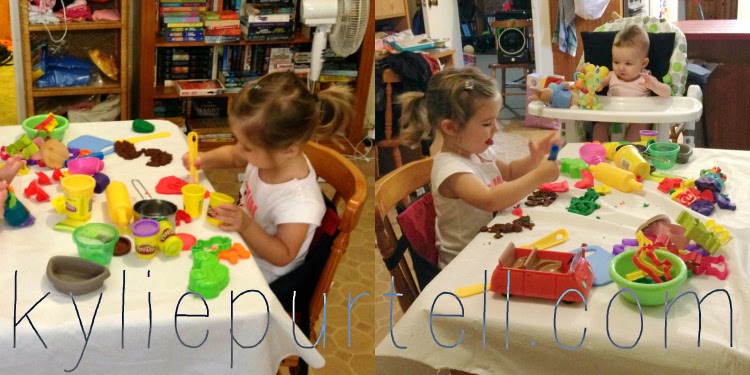 Now some people would argue that Playdough is in fact a messy activity, and it can be. However if you put a few simple rules in place it can be lots of fun with minimal mess.

Now in an ideal world, we would always make our own playdough, and aside from the fun of making it together, there is the added benefit of knowing exactly what is in it, which makes it not so bad when toddlers inevitably have a taste! However making playdough is not always convenient and it doesn't last as long as store-bought Play-Doh, so for 2 year olds who are mostly over the whole put-everything-in-mouth phase, store bought is a quick, cheap alternative. I have a number of plastic play utensils that I give Punky to use when playing with the dough, and I always give her measuring cups and blocks and other small toys which she can use to make impressions in the dough. She often also ends up using the containers to practice stacking, so keep them handy.

We have a rule in our house that playdough is only to be played with at the dining table and under no circumstances is she to walk around with it or take it in the loungeroom. I make sure there is a plastic tablecloth on the table (cheap as from the supermarket) and we have a nice big placemat that we got from Aldi which is the perfect platform for creating. Any small bits and pieces of playdough that get missed at pack-up time are easily vacuumed up after a couple of hours of hardening. 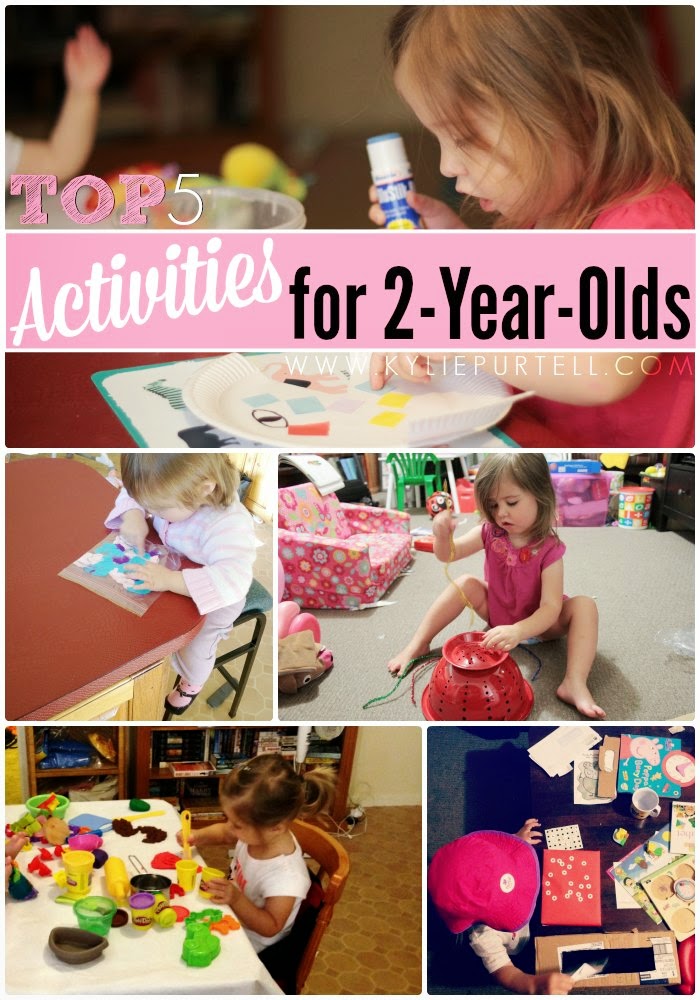 Kylie Purtell said…
I saw the fish one on your FB page and loved it. I will definitely have to try that. I like the paint in the bag idea too and the colander. We're going to have fun with this. Everytime my little one says she wants to use play doh though I say really? I'm just not a fan.
18 March 2014 at 07:21

Kylie Purtell said…
My goodness now I feel like the worst mum EVER! These are great ideas, except for the paint one, my 2.5yo knows how to open bags and would just start eating it, ditto with play dough. BUT I love the pipe cleaner idea, the postman one... What a McLegend you are (and not that lazy really) xx
18 March 2014 at 10:22

Kylie Purtell said…
You had me at 'minimal mess'! These are great ideas. My little almost two is just starting to show signs of wanting to do craft. I just have to teach her that drawing on walls and furiture is not a good option!! xx
18 March 2014 at 10:49

Kylie Purtell said…
Love these ideas! I'm so bookmarking this for later. So much better than chucking them in front of the tv like some people do.
18 March 2014 at 12:31

Kylie Purtell said…
Great ideas Kylie.. We are attempting toilet training at the moment and the pip cleaner and colander activity sounds perfect!
18 March 2014 at 14:45

Kylie Purtell said…
Great ideas! I have tried the zip lock bag painting to great success with my 21 month old, but am looking for more fuss free ideas for busy bag type concepts, as baby number 2 is due in June, 2 weeks after my little boy's birthday. Thanks very much :)
18 March 2014 at 17:20

Kylie Purtell said…
Oh you have given me some great ideas here Kylie! Thanks!
One of my faves too is always cutting out the catalogues and gluing the pictures you like. You'd be amazed at how exciting it is to cut up pictures of toys or even random things like vegemite. Plus it costs you virtually nothing :)
18 March 2014 at 20:51

Kylie Purtell said…
These look great! Mr 4 hates finger painting because he doesn't like touching the paint but I wonder if he would do the ziplock bag painting.

We've done bubble painting a few times, but just make sure Punky blows through the straw and doesn't suck! We also use plastic cups. http://www.things-to-make-and-do.co.uk/painting-and-pictures/bubble-painting/bubble-painting.html
19 March 2014 at 14:22

Kylie Purtell said…
Awesome Kylie :) Made a mental note to get some pipe cleaners.
Though I wouldn't be game with the zip lock bag! My shits would have that sucker open in no time!
21 March 2014 at 15:24

Kylie Purtell said…
I love that you've even gotten her using the glue stick the mess free way lol
21 March 2014 at 21:54