An Open Letter to Politicians of ALL Persuasions

I originally wrote this as an open to letter to the NSW Labour Party back on December 3rd 2009, back when we had a revolving door of leaders/premiers. I originally re-worked it before the last federal election but with newborn craziness I ran out of time and didn't get a chance to finish it and post. This week however the theme over at The Lounge is an Open Letter, so I thought now was the perfect time to get it up as my sentiments remain the same... 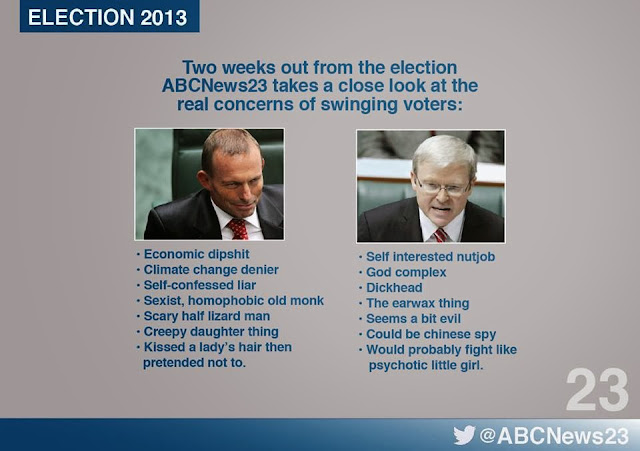 Let me start off by saying I don't give a FUCK(!) who your leader is! Whether it be Gillard, Rudd, Abbott, Turnball, or Donald Ducking Duck, I don't care!

What I do care about is the WOEFUL state that Australia finds itself in.

I care about the lack of public transport for people living to the west of Sydney and in rural areas around the country.

I care about the disgraceful state of our hospitals and the terribly inadequate medical services available to people living in rural Australia.

I care about the horrible state of our roads, and wonder why after years and years and years of campaigns and deaths some of the worst roads in the country STILL have not been fixed.

I care about the way in which you spend money on things that have no benefit whatsoever to the country, except for a handful of those that live in the inner and eastern suburbs and wonder how it is that this government has spent so much money yet nothing really beneficial has been done for the people of Australia.

I may not be the most educated when it comes to politics and government, but what I do know is this -

So, my advice to you all is this...STOP all the bullshit leadership crap, stop all the negative mudslinging, stop all the schoolboy name calling and farcical posturing and start doing something for our country!

Because the simple fact of the matter is, if you continue to waste our money and do nothing for us we will reward you by NOT voting for you in the next election.

Then it won't really matter who's leader of the party because they won't get to be Prime Minister. And that seems to be all your members care about. Having the prestige that goes along with the title of Prime Minister, without actually doing a thing to help the country. Australians deserve better than politicians who only care about getting re-elected, who don't have the guts to make decisions and policies that may not be popular in the sort-term, but will benefit the nation in the long-term.

I care about more than who will keep their jobs after this latest election and who might keep theirs at the next. I care about what this country will be like for the next generation, and next after that. You should too and act accordingly. 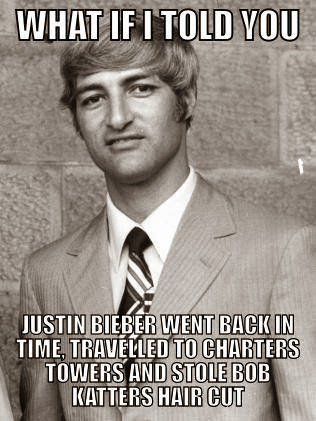 Kylie Purtell said…
Well said lovely - we're facing major bikie/gang related problems up here that should have never been allowed to get this bad! Politicians should try more responsibility for their actions, I think as the years have gone on politicians are doing less and getting paid more. It should be the other way around x
3 October 2013 at 06:31

Kylie Purtell said…
I love that meme!!
Your post is so true. Nothing's changed since 09. The politicians just need to pull their fingers out and get to the job of fixing things. We have serious issues in this country and they are not just the ones that are on the media. We look at other countries and criticise but Australia is developing some pretty major problems. Great points, K! Thanks for linking with The Lounge. Robo X
3 October 2013 at 07:59

Kylie Purtell said…
Bob Katter threw eggs at the Beatles when they arrived at the airport. This is my favourite Bob Katter fact. I love that comparison chart - though it depresses me at the same time.
3 October 2013 at 08:11

Kylie Purtell said…
Justin Bieber and Bob Katter. HAHAHAHAHA. Hadn't seen that one doing the rounds - what a classic!
What do you think of the current Labor leadership debating?
3 October 2013 at 08:12

Kylie Purtell said…
Ha ha, love it! Totally agree. I almost wished I didn't have to vote this time around it was all so depressing. Great post.
3 October 2013 at 12:48

Kylie Purtell said…
Australian politics embarrasses me, it makes me angry and it makes me frustrated. Your post sums it up beautifully.
3 October 2013 at 15:40

Kylie Purtell said…
I'd never get Aussie politics but love that you so vocal and clear about what you want for your country and family living in it. Some people just vote for the sake of voting, or worst, just follow the mass because they couldn't care less.

Kylie Purtell said…
Bloody pollies! I will never understand their dumb arse ways, it is beyond frustrating. Makes me wonder what the heck they are doing with OUR money. I don't get it.
5 October 2013 at 07:42

Kylie Purtell said…
Oh that meme is classic! I was so glad when the election was over. Not happy by the outcome but now I'm more fired up than ever about the state of our nation. The next 3 years will be very interesting, indeed.
5 October 2013 at 13:10