I was a child of the 90s. My Fashion Fails are proof of that!

I was born in the early 80s and started school in 1988. But my defining decade is the 90s It's the decade I spent at school, the decade I was a teenager in. The decade I was also most daggiest in.90s fashion is possibly some of the most ridiculous there is. And 90s hair styles were even worse! Unfortunately (for you, not me!) I have not had time to go through old photo albums and scan in some pics for this post to link up at The Lounge. So you'll have to make do with a couple of dodgy pics and a bunch of ones I nicked off a google image search. 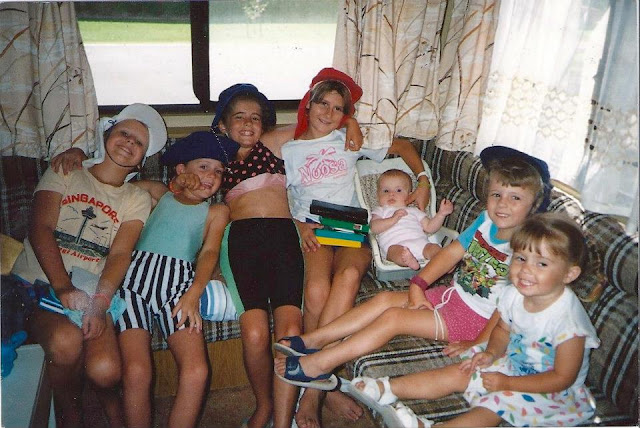 I did manage to dig the photo above out of the Facebook archives of my Mum though, and as you can see, myself, my sisters and my cousins are demonstrating the height of kids fashion at that crucial junction of 80s and 90s fashion, 1990. I am third from the left and as you can see, I was rocking those bike pants and swimming top from dawn to dusk! Other notable aspects of 90s kids fashion is the classic plaited friendship bracelet worn by my cousin, first on the left, and the teenage mutant ninja turtles t-shirt worn by my other cousin, second on the right.
This weeks theme is Fashion Fails and along with the 80s, the 90s truly is defined by its ridiculous fashion fails, (but I suppose they weren't really fails at the time were they). Everyone would remember the Hypercolour t-shirt. Or to be more correct, the Hypercolor tshirt. Yes, I did own one. In fact I also owned a Hypercolour Bodysuit! That I would wear with jeans or a pair of jean shorts, or with that other 90s staple, the denim overall.

Ah scrunch socks. I loved scrunch socks, and yes I did wear more than one pair at a time to achieve that awesome two-tone effect. My favourite way to wear scrunch socks was over the top of the coloured leggings I would wear with an oversized shirt. I was totally fashion forward!

I was also mad for 90s hair styles, like scrunchies, tiny butterfly hair clips, and of course the mega-hair-sprayed fringe wave. I really do wish I had a photo of some of my attempts to create the fringe wave because they were truly hilarious!

Being a big fan of the show Blossom, or any 90s TV really, I embraced the Blossom-style hat, with the front of the brim turned up. It was the must-have essential fashion item in primary school. I had multiple.
I also had multiple pairs of the obligatory round sunnies. I had a bad habit of chucking them on my bed and then sitting on them. I think I went through 4 pairs in one year and after that Mum put her foot down and refused to buy me anymore. So I saved up any money I was lucky enough to score off Grandma and Grandpa and bought my own pair. With blue lenses. Oh yes you read that right. Blue lenses.

Of course the one movie that informed most of my fashion choices from the mid-90s onward was that classic, Clueless. Yep, I owned multiple tartan and denim mini skirts, sleeveless vests and coloured cardigans. I also owned many pairs of above the knee socks and had so many mini backpacks that Mum eventually had to ban me from buying anymore!

I wrote in my last post for The Lounge link-up that fashion is just one thing that I have never gotten better at. Even back in the 80s and 90s, when horrendous fashion was in fact the height of fashion, I still struggled to get the look just right, and by the end of the 90s and early 00s I had given up bothering and just wore whatever the hell I was comfortable in. Which was most often a pair of jeans and a singlet with cardigan, usually in colours that I loved but that most people would not have worn together. But I did not care.

Special note has to be given to my raver days in the early 00s though. Prue did an awesome post for the link-up on her candy raver fashion and its looks eerily similar to some of the things I myself wore, just minus the candy. My most favourite raver outfit was a leather, studded bikini top that I bought for $90 at one of those sex-toy parties that Kelly HTandT had back in 2003 when we were both young and child-free. I would wear that baby over a hot-pink bikini top with a pair of skin-tight 3/4 length leggings or pants and my sunglasses.

So there you have it, a brief history of the fashion of Kylez. Were you ever a slave to the fashion trends of your defining decade? If so you should totally share them over at The Lounge, which is being hosted by the awesome Slapdash Mama this week.

Kylie Purtell said…
Kylie!!!!! OMG!!! This is so hilarious. I love love loved Blossom, clueless, round John Lennon glasses, scrunch socks, ALL OF IT! I scrunched those socks like they were going out if fashion! Which they were! Bahaha! Thank you for linking up again with The Lounge!
9 May 2013 at 15:06

Kylie Purtell said…
I was a scruch socks advocate, I worked out that if I wore my dad's computer socks (yes, gross, I know) underneath, the scrunch was thicker and the sock stayed higher. I loved Blossom too. And hypercolour!!

What I loved most about this post was that lounge!!! I haven't seen that print in years! Whoever designed that couch must've made an absolute motza!
9 May 2013 at 16:37

Kylie Purtell said…
I loved the butterfly hair clips. I think I had 100's of them at one stage. I sucked at anything hair though so they didn't really get used much.
9 May 2013 at 17:10

Kylie Purtell said…
Awesome! I wish I had more photos of my tragic fashion history! I need to get on to this Lounge link up too. So much fun! #blogeverdayinmay is taking up all my time at the moment.


I was over scrunchies and banana clips in the 80s. My tragic period was the gangsta rap era of 89-91 when I had my hair dyed red with an undercut with steps shaved into it. I wore baggy white King G overalls with rap t-shirts (Public Enemy, NWA, 2 Live Crew, De La Soul) over hoodies.


Scrunch socks are still cool. Blossom - no, never got into that. Loved Clueless. And 90s grunge is back right now! Get yourself a flannie and some docs and an old Soundgarden t-shirt and you'll be back in style!

Kylie Purtell said…
Oh how I longed to be Alicia Silverstone!
P.S. I almost fell over a few months ago when someone pointed out that Dr Amy Farrah Fowler from Big Bang is child star Blossom!
10 May 2013 at 11:57

Kylie Purtell said…
Hahaha ! Gosh what a blast from the past that is! I loved the the whole preppy look from Clueless too. Hair crimping was one of my fashion fails in the 90's - anyone remember that ? x
10 May 2013 at 12:22

Kylie Purtell said…
Round glasses with coloured lenses, they were a fashion statement in the 90s, weren't they? Being a little older I also remember the ra-ra and bubble skirt fad and I was also a big top over leggings with socks sort of girl. Yes, it's true, I have never been that stylish ;)
11 May 2013 at 15:32

Kylie Purtell said…
Haha! Those John Lennon sunnies! They were all the rage, weren't they? I bought so many pairs too - the cheap and nasty kind. Gee, I thought Iooked cool!
11 May 2013 at 21:09

Kylie Purtell said…
I had those sunnies, and a hypercolour they were AWESOME - thanks for sharing - wish I had some pics I could use, might have to dredge some up for next time! Em x
13 May 2013 at 15:05