The other week I received an email from a PR company about an opportunity to review some Hot Cross Buns for Baker's Delight. My first instinct was to refuse, because to be totally honest with you, I don't like hot cross buns.

I'm not a fan of sultanas or raisins you see, particularly in cakes and muffins and the like. But when they said I could have a bag of the traditional fruit buns, and a bag of the chocolate chip ones too, well, how could I say no to something with chocolate in it!

The other thing that swayed me towards saying yes was the fact that they wanted to get the word out that this Saturday, the 16th March, is their 'Bundraiser' day, where a dollar from every six pack of Hot Cross buns sold will be donated to children's hospitals around the country. So I figured, that while I might not be a fan of the buns, I know a lot of you are, so what better excuse to grab a pack than donating to a worthy cause! 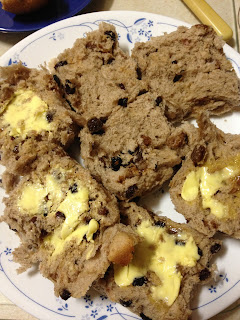 I arranged to pick up the buns from my local Baker's Delight, as apparently living 60kms from Sydney is too 'rural' for a courier delivery (yeah, I had a bit if a chuckle at that too!) and took them with us to visit Dave's Grandma and introduce Punky to his visiting cousin and Uncle from the NT.

All of Dave's family were there too, and when I walked in baring buns (holding the hot cross buns people, not mooning everyone!), I was certainly welcomed with open (and hungry!) arms.
We cracked em open, nuked a few so they were warm, put butter on a couple for those who wanted them and tucked in.

Dave's brother D was a bit skeptical of chocolate hot cross buns so he started with a traditional fruit one, and in his usual thoughtful voice told me that he quite liked it, it had "just the right amount of spice". I convinced him to try a chocolate one next, and while he won't be converted any time soon, being that he is a man who really doesn't like change, he did admit that "the chocolate and spice actually goes alright together".

Dave's sister N is a bun fan from way back and she got right in to them, not discriminating between traditional or chocolate, she loved them both (and I think she would have eaten more if she didn't have to share!).

Even Dave's other brother J and his Dad, who were adamant they didn't like hot cross buns, gave them a go and were both positive in their feedback (although to be honest, neither of them had had dinner and were hungry enough that anything would have tasted good I think!). So then came the real test. Dave and I.

Now, as I said, I'm not a fan of sultanas, especially in bread and cake and stuff, and neither is Dave, so of course we went straight for the chocolate ones. And I am happy to say that I really liked them! I had one just straight out of the pack, and it was ok, but what really made it was nuking it for a few seconds to make it nice and warm, and melt the choc chips, and then popping a little bit of butter on there. Delicious!

Even Dave was pleasantly surprised, and I have to say, I think we will be picking up a pack of the chocolate ones on Saturday so we can make our contribution to the Bundraising efforts, and because I think we will both be in need of a treat after eating so well the last few months to fit in to our clothes for our bridal party duties tomorrow (Friday).

So if you're a Hot Cross Bun fan then I highly recommend you not only try out the buns from Baker's Delight, but buy them this Saturday 16th March and help them with their aim to raise over $160,000 for kid's hospitals. If you'd like to see a list of the hospitals the money will be donated to, you can find out by clicking here.

So tell me, do you like Hot Cross Buns? Are you a traditionalist or do you go for the choccy ones?

Linking this post up on Friday with the fantastic Grace for Flog Yo Blog Friday, over on her blog With Some Grace.

Kylie Purtell said…
I'm so glad you decided to participate and like the chocolate ones because I just couldn't be friends with you if you don't like hot cross buns! Give me traditional spicy fruit - but with out the cross but on top - and I'm a happy lady. Warm them in the microwave and smear a bit of peanut butter on top and I'll be your best friend forever!
14 March 2013 at 20:33

Kylie Purtell said…
I'm a sucker for a hot cross bun - except for the chocolate ones. I really don't get combining bread with chocolate. I just don't get it at all.... I hope Baker's Delight raise lots of money for Bundraiser Day!
14 March 2013 at 21:46

Kylie Purtell said…
I love them - and the spicier the better but no to the chocolate ones - my kids like the fruitless ones, which I don't get at all...so yes, traditionalist. And yay to Baker's Delight for raising for a good cause.
15 March 2013 at 06:24

Kylie Purtell said…
Oh I do love hot cross buns, especially the spicy ones, I should make my own and double the spice. Not a fan of the choc ones but that's sheer prejudice and traditionalism, my kids are though. I freeze hot cross buns, partly to keep them away from prying hands, then pop them in lunchboxes. Have to say I do tend to avoid eating them myself as they're so energy dense... sad but true... when I do eat them I enjoy them a lot and drench them in butter... love a treat but can't do that every day.
15 March 2013 at 08:46

Kylie Purtell said…
Hot cross bundraising! Clever.
I have never really liked fruit in bread BUT I do savour the hot cross bun.
Must be warm and have butter oozing all over it.
I am a tradionalist (no choc chip buns at my house).
Leanne @ Deep Fried Fruit
15 March 2013 at 09:11

Kylie Purtell said…
I like traditional hot cross buns but wouldn't give up anything with choc in it either! Unless the choc is from dubious places/countries of course :p
15 March 2013 at 09:48

Kylie Purtell said…
Totally not a hot cross bun fan - they smell awesome then I put one in my mouth and my taste buds all scream "what the hell are you doing?" *sigh*
15 March 2013 at 14:16

Kylie Purtell said…
I used to hate them as a kid and used to pick out all the sultanas out and shove underneath the couch - at our house and other people's when I had to be polite and take a hot cross bun even when I didn't like them!! Em @ Have a laugh on me
15 March 2013 at 15:22

Kylie Purtell said…
I love hot cross buns, but only the traditional ones. Chocolate on bread just seems wrong to me!
15 March 2013 at 16:16

Kylie Purtell said…
You know, I was never a fan of hot cross buns either until only a few years ago! Now I find them terribly hard to resist walking by the bread aisle! But I manage to because unfortunately being a nut and egg free home we can't have any in the house...boo! But looks like you guys had an awesome time with them. Dave' bro does look every bit the critic too! :)
15 March 2013 at 20:42

Kylie Purtell said…
I do not discriminate between traditional and choc-chip- I love them both. Some people complain about hot cross buns becoming available in January, but why restrict hot cross buns to Good Friday x
16 March 2013 at 22:20