This post was inspired by Kevin at The Illiterate Infant. He asked me if I was interested in guest posting for his Mums on Dads series and he threw me a couple of ideas that I could workshop. One of those ideas was "Dads and their little girls - where does their allegiance really lie when there's two special ladies in one family?". I started writing this post but decided it wasn't going quite where I thought it should and decided to draft it and work on it later. I ended up writing about Dad's and sympathetic pregnancies, which you can read over here. So instead, here is a post that kind of took on a life of it's own.

Before I fell pregnant with Punky, Dave and I weren't too fussed about what gender our future-first-child would be. I know that Dave would have been happy to have a boy or a girl, but at the end of the day, I'm pretty sure he really liked the idea of having a son, a boy of his own. 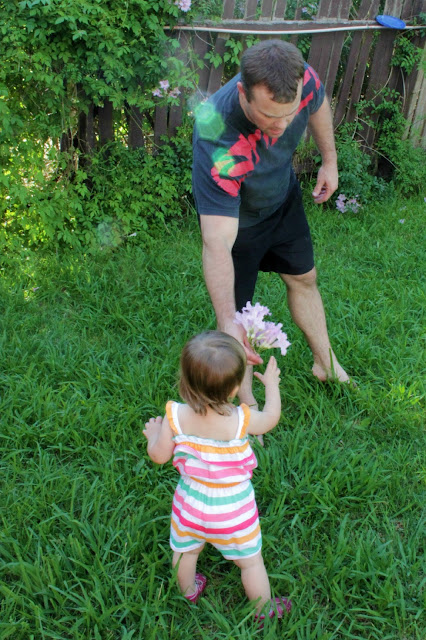 I mentioned to Dave that just because we might have a son, didn't mean he would be interested in doing any of those things. And that in having a daughter he could do exactly those things with her too. Heck, I've been known to kick and throw around a ball (not well, but that's beside the point!), and I can talk footy with the best of the boys.

In the end we had a baby girl and Dave was not disappointed in the least! From the moment she emerged, Dave has been wrapped around her little finger and the way he dotes on her is amazing to watch. He has so much patience and loves to spend time outside with her, kicking a ball and showing her all the bugs and insects in the yard, 'toughening' her up as he says, so she won't run screaming from a cockroach like her mother!

And while it fills my heart with joy to see the special bond they have, I have to admit to having had the odd pang of jealousy. In the beginning it was because Dave got to do lots of the fun stuff, and didn't have to perform the duty of on-call dairy-cow 24 hours a day.

But as Punky has gotten older it manifested in different ways. Hearing him use the nicknames he made up for me and only ever used for me, he now uses for her too. Seeing the way his first thought in any situation is for Punky, and if she is ok, and comfortable and happy. Seeing the way he watches her doing things and rushes to help her out . 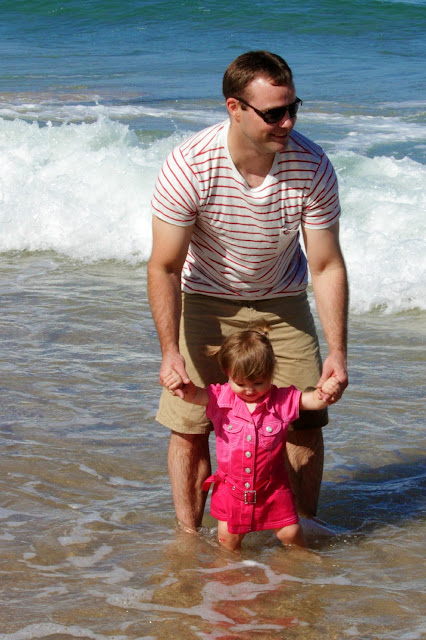 I've come to realise though, that doing these things with Punky is in fact another way that he expresses his love for me. Albeit in an abstract way. Just because he has this special relationship with our daughter doesn't in any way diminish his feelings for me or our bond. And while our relationship has changed since Punky came along, and there have been tough times, and times when we haven't seen eye to eye, times when we've been arguing over who's turn it is to get up in the morning or change the dirty nappy, our relationship is not worse. If anything its grown and matured. Dave now has the little person to play with and tease and do all those kiddy things with/to. All the things that he used to annoy me with.  Thank God!

And in return I've had the privilege of watching my husband grow in to the role of father, I've watched a relationship form and grow in front of my eyes. We've been able to grow our own relationship and learn to appreciate each other more. There's no jealousy anymore, just love and thanks, that our daughter, and the special bond Dave has with her, has allowed our bond to grow and become better than ever.

Linking this post up with the ever awesome Jess and that fantastic weekly link-up, IBOT. If you blog on Tuesday then you should definitely pop on over and check out some of the other awesome peeps that also BOT!

Kylie Purtell said…
Beautiful, I love the line "And in return I've had the privilege of watching my husband grow in to the role of father". Great post. Can totally relate as I've watched my hubby with his two daughters. Cheers.
Leanne @ Deep Fried Fruit
5 March 2013 at 06:45

Kylie Purtell said…
It's a beautiful relationship, Daddy's little girl. She is such a spunk, all over. She will be out there kicking balls around with the best of em!
5 March 2013 at 07:14

Kylie Purtell said…
Lovely - cute pics too. But do you think it's gender? Or either gender would have instilled that behaviour?
5 March 2013 at 07:16

Kylie Purtell said…
What a beautiful post Kylie! A similar thing us happening here - though we had the boy first, and he has a beautiful relationship with his dad, watching the relationship that is developing between my husband and our new daughter us gorgeous....
5 March 2013 at 07:20

Kylie Purtell said…
This is a really beautiful post Kylie. Love is a complicated thing isn't it? I can really relate to what you say about the nicknames! My husband is great with our three kids but he does do things slightly differently with our girls than our son - mostly it's subconscious too. It will be fascinating to watch their relationships change as they grow.
5 March 2013 at 13:06

Kylie Purtell said…
I think watching my husband parent is one of the coolest things ever. I think I love him more by watching him with our kids. I see a different side that I hadn't seen before.I don't know why, but I worried that he wouldn't be as close with our second child as he was with our first......but that baby girl has him around her finger already.
5 March 2013 at 13:39

Kylie Purtell said…
brought tears to my eyes K. a father/daughter relationship can be so beautiful and special, given to the right man, and sounds like your Dave is going to have a wonderful relationship with his baby girls!
5 March 2013 at 14:55

Kylie Purtell said…
It is different isn't it?
When we had Ava, I asked Boatman if he wanted another boy, so it would be even, and he really didn't mind. He loves that he does have his little fishing buddy, but he adores his girls as well. It's so beautiful to watch
5 March 2013 at 15:08

Kylie Purtell said…
Oh so beautiful Kylie. A daddy's and little girl's bond is just the specialist of things. I delight in watching Mr Awesome spend time with the girls. Warms my heart no end. Nothing more manly than a tea party in your footy shirt!

Kylie Purtell said…
Beautiful post Kylie! The photos are just amazing! There's a very special relation between a father and a daughter. My father is for me my hero even until now.
5 March 2013 at 20:57

Kylie Purtell said…
I have three girls, and my mum had three girls (and a boy), so the father/daughter bond is something I am well familiar with! Dads are so important to girls and their future relationships with males, and it sounds like your little girl is off to a great start.
5 March 2013 at 21:54

Kylie Purtell said…
Lovely post, Kylie, so sweet to see these two like this. I think this generation is luckier than the previous one; parents seem to be so much more aware that they'll never get this time back, and do something about it. #teamIBOT
5 March 2013 at 22:00

Kylie Purtell said…
I have a boy and two girls and although Mr D adores them all, there is definitely a different kind of bond between his boy and the girls. I also struggled in the very beginning - especially when our son was born, with some jealousy. Over time I've coe to realised that he loves us all and his bond with the kids is his very own, which makes me love him more too. x
6 March 2013 at 09:43

Kylie Purtell said…
I reckon she will be out there kicking those balls, and I bet if we ever have a boy he will be such a Mummy's boy and not want anything to do with footy! Lol!
7 March 2013 at 09:43

Kylie Purtell said…
Thanks Lydia. It is a good question, I think he still would have turned in to an awesome Dad no matter the gender, but I definitely do think he shows a softer side with Mia than he might with a boy. One day we might find out. If he survives two daughters first that is!
7 March 2013 at 09:44

Kylie Purtell said…
Thanks Amy. I think every child's relationship with their father is special and unique, but there is something about Dad's and their little girls isn't there.
7 March 2013 at 09:45

Kylie Purtell said…
Thanks Lara.Oh yes, I definitely think its subconscious. It would be interesting to see the dynamic if we ever had a boy.
7 March 2013 at 09:46

Kylie Purtell said…
I totally get what you mean, I have loved watching him grow as a father, from a man who didn't think he was very good with kids, he is amazing with his own and as a result he's become better with other people's kids in general. I always knew he would be though, and told him, but I don't think he ever believed it until now!
7 March 2013 at 09:48

Kylie Purtell said…
Thanks Aroha, it really is. I can't wait to see him rough-housing with both his girls and taking them on adventures in the backyard, so much fun times ahead!
7 March 2013 at 09:48

Kylie Purtell said…
It really is beautiful to watch. I could sit and listen to them play together all day, its the best sound in the world!
7 March 2013 at 09:49

Kylie Purtell said…
Thanks Twitchy, I totally agree. I think this generation will benefit from the lessons we've learned from our parents and the importance of spending time together, especially for Dad's that work outside the home.
7 March 2013 at 09:51

Kylie Purtell said…
It is hard in the very beginning, getting used to that shift in dynamics but I agree, I definitely love Dave even more since we've become parents and seeing him grow in to this role of father so well.
7 March 2013 at 09:52

Kylie Purtell said…
This is beautiful! I don't have any girls, but love watching my husband play with his boys. It's so true what you said about gender and activities. I always wanted to have a girl, to do all the 'girly' things with, but my two year old likes tea parties, and every now and again, they play with a baby doll.
10 March 2013 at 19:54

Kylie Purtell said…
we dont have girls but we do have five boys - and each one is different. I can see Hubby connects with each one differently...and its good to watch. But I miss out on the "Girly" thing....I sometimes feel out numbered and when it comes to boys things I really feel left behind...hoping that one day I have a Granddaughter to spoil, and I bet Grandad will spoil her the most :)


Good to hear about your hubby having a loving close relationship with your daughter.
11 March 2013 at 18:40