The other night, after going to my first ever blog meet, I was sitting on the lounge, scrolling through Facebook when I came across a fan question on the page Dispelling Breastfeeding Myths.

A new Mum was asking for tips on how to get her previously well-sleeping 4.5 month old to stop waking so frequently through the night and wanting to feed. With the same thing having happened with Punky I thought to myself "Just hang in there love, it's just a major brain developmental stage and things will settle down again soon". I felt sorry for her knowing how hard it is at the beginning when you think things have finally gotten to a good settled point and then bam! Everything changes! 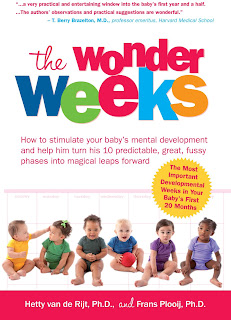 I knew from my own research when Punky would inexplicably change from her usually good-sleeping self that when babies are going through major brain and physical development periods their sleeping and eating habits can change and suffer as a result.

I didn't bother to put my two-cents worth on the page because many other people already had and most of them were saying the same thing I would have. What was interesting though was a few people that recommended a book called The Wonder Weeks, which covered the different major periods of brain & physical developments that happen in the first two years of life. It sounded interesting so of course I looked it up, then ended up buying a copy and downloading it to my iPad's Kindle.

(Sidebar: while I will always love hard-copy books, the look and feel of them, I won't lie, and I'll tell you that I really do also love the super-fast convenience of being able to hear about a book, find it, buy it and start reading it all in the space of 5 minutes while sitting on my lounge!)

So anyway, I downloaded the book and skipped straight through to 15 months, and sure enough, there is a Wonder Week right around the 15 month age mark. Something that I like about the book is in between explaining the major brain developments that happen around Wonder Week stages, they also include lots of quotes from parents of children at that age and the behaviour they have been displaying.

Quite often a Wonder Week is characterised by disruption to usual sleeping patterns, changes in appetite, mood and behaviour, and an increase in crying. Reading the examples of kids between the 14 and 15 month age mark, the time when these major brain developments can start to take place, was like reading about Punky.

My formerly super-happy, even-tempered girl had gone back to extra fussiness, like she did around 12 months (coincidentally another Wonder Week period) and other times in her short life, and was displaying what can only be described as a super-temper! Oh my goodness, the tantrums that have been thrown lately are amazing! All because a block won't fit in the hole she wants it to. Or I won't give her her piece of toast before its been in the toaster and defrosted! Her usual awesome 12-hour sleeps from 7pm-7am with no waking during the night have been disrupted also.

They state something similar at the start of each chapter (from Chapter 11, Wonder Week 64) -


The first phase (fussy period) of this leap into the perceptual world of "principles" is age-linked and predictable, and starts between 59 and 63 weeks. Most babies start the second phase (Quality Time) of this leap 64 weeks after full-term birth. The first perception of the world of principles sets in motion the development of a whole range of skills and activities. However, the age at which these skills and activities appear for the first time varies greatly and depends on your baby's preferences, experimentation and physical development.


So basically, while all kids will start to display some of the same behaviours and signals that these brain developments are taking place, you may not start to see the skills and understanding they are developing until many weeks later. And it happens differently for each kid. Which of course makes sense, because all kids and babies are different. But the basic developments are happening around the same time.

It's fascinating reading and has gone a long way to explaining why Punky has been displaying certain behaviours, and the extra whinginess that has been going on. [Edited to add: after ruling out any other issues, like illness, the Wonder Weeks theory makes a lot of sense to me]. It doesn't really make me any more patient knowing this, but it has helped me, in moments of frustration, to stop, and remember that this is a stage and the frustration I am feeling is the same for her. I can't imagine how hard it must be for her, being on the cusp of so many developments, struggling to make herself and her needs understood when she hasn't quite figured out how to use the words she needs.

As I said to Dave in the car on Sunday, on the one hand, I'm looking forward to when she can tell me what she wants, rather than whinging at me or getting frustrated when I don't understand what it is she is trying to tell me, but at the same time I am really dreading her being able to talk because I know once she starts talking properly she is never going to shut-up! As it is, the babbling is hitting all-time high levels, and with a world-class talker for a Mother? Well, my word of the year, Patience, is going to be sorely tested!

If you're interested in the way babies brains develop then I would highly recommend this book. I have only read the chapters relevant to Punky's current stage of development, but once I've finished reading through those I intend to go back and start at the beginning, in preparation for this next baby!

Did you notice that your child displayed altered/varied behaviour at different stages? As they got older did you struggle to deal with the extra fussiness that came with major brain developments? Can I be honest and tell you that I am struggling with this age & stage more than I have at any other stage with Punky!

And because it's Tuesday, I Blog! Make sure you check out the other wonderful peeps who Blog on Tuesdays too over at Essentially Jess.

Now, I need to go open the bedroom that Punky has managed to close herself in to while I wrote these last few lines!
Labels: IBOT Linky Lovin' Parenting

Kylie Purtell said…
I swear 90% of the mums on my Facebook mums group have this book, our the app.... They talk about it all the time! I've never been one for parenting or baby books but it ius interesting women if the stuff they've shared....
19 February 2013 at 10:26

Kylie Purtell said…
I'm currently pregnant with my fifth child and have never heard of this... off to look up the book (and I, too, love my kindle app for it's instantness!)
19 February 2013 at 11:17

Kylie Purtell said…
Sounds like a fabulous book. I wish it had've been around when my kids were little!
19 February 2013 at 11:55

Kylie Purtell said…
If I had another baby I would be interested in this book. It would be nice to have a little insight into what is going on.
19 February 2013 at 13:22

Kylie Purtell said…
I remember both of my girls waking through the night in the weeks they learned to sit up. I'm sure they were practising their party tricks! I'm one for iBooks and audiobooks - it can be hard to get your hands on what you want up here. :)
19 February 2013 at 15:08

Kylie Purtell said…
Yes I would be interested in reading this book! Both of our boys were yoyos today. Up, down, up, down. Not fun.
But you're right, Mia will start communicating soon and then she'll be able to tell you what's wrong and you'll see how annoying it is and long for the days when she couldn't talk. But whatever. ;)
19 February 2013 at 19:54

Kylie Purtell said…
My sister got this book and from what she said about it, it does sound like great reading. I read it elsewhere when Ned was a baby that changes to sleep/mood/eating could be explained by major brain changes and development. It always helped to know we weren't suffering for nothing. V.
19 February 2013 at 21:25

Kylie Purtell said…
I heard of the book via Kellie O'Brien at Three Little Princesses blog and had a quick look through it. It made sense though I didn't follow it religiously. I've always, for better or worse, taken the approach that you mentioned, "Just hang in there. It's a phase. It will pass." Not having had more than 5-10 full night's sleeps in 4 years, I guess I've chosen the hang in there approach. I know some can't and panic early on, needing serious intervention. Or if your first child slept through and second didn't, it would be a shock to the system to not get sleep. At the end of the day, it helps to try and get an understanding of what's possibly going on with these little people. They can be very puzzling!
20 February 2013 at 13:30

Kylie Purtell said…
I hadn't heard of this, but it does make sense. That four month change in babies is crazy, and can be really hard to manage.
Can't say I noticed it very obviously later on.
20 February 2013 at 21:34