The Tale of Peter Rabbit. Or as Dave calls it, The Book with the Shit Ending

I used to read a LOT of books. If you click on the 'books' label in my label cloud over in the sidebar you'll see there are a lot of posts. I also used to review the books I read on the blog. But since having the munchkin the only books I've really had a chance to read are kids books, so I thought I might as well write about some of those.

Before Punky was born I bought a lot of books to read with her, in fact I bought quite a few kids books before I was even pregnant, as I knew that once we actually had a baby I wouldn't have as much money to spend anymore. We have heaps of books now, thankfully, as Punky loves to read.

When I was a kid I always thought everything was innocent and I was oblivious to the hidden meanings in many books, songs and movies. Stuff that as I got older I heard again and thought, "Oooo, that's rude" or "Oh that's not what I thought they meant!". I reckon the same could be said for many kids books and TV shows. I mean come on, you can't tell me people weren't on drugs when they came up with some of those shows. Have you seen In the Night Garden? That's a bad acid trip if ever I saw one.

Granted, not everything has a hidden meaning. But when your mind has a summer home in the gutter like mine does, you can make anything just a little bit wrong!

So with that in mind, here's my summary of The Tale of Peter Rabbit. Golden Book edition. 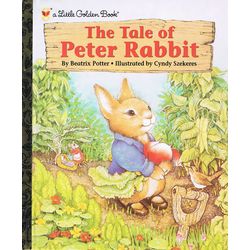 I'm sure many of you have read the tales of precocious Peter Rabbit and his misadventures in Mr. McGregor's garden. Peter lives in the basement of a tree with his Mum and three sisters. Poor Peter!

His father was ruthlessly killed and eaten by that maniac, McGregor, and like any boy who's lost his father at a young age, he likes to get up to a bit of mischief. Old Mrs. Rabbit tells the kids they shouldn't go messing about in Murderin' McGregor's garden while she goes down the road to score buy a loaf of bread and five currant buns.

Peter's sisters are Flopsy, Mopsy and Cottontail - with names like that you know old Mrs. Rabbit's either on crack or a celebrity. Whatever - those bitches are little goody two-shoes but Peter, the black Rabbit of the family, who likes to be a little naughty, just has to go (check out the bastard who murdered his father and seek out his revenge) have a gander in McGregor's garden. I mean, old Mrs. Rabbit told him not to, so of course he will. She's never heard of reverse psychology apparently!

So anyway, Peter goes looking for trouble and finds it in the form of some (alcohol) vegetables. That's his story and he's sticking to it, so we'll play along and call them 'vegetables'. After binging on said 'vegetables' that murdering (gangster) farmer comes along and spies little Peter and starts chasing after him, waving a (gun) rake, and calling "Stop (right there motherfucker), thief!".

Peter is so drunk full of 'vegetables' that he can't remember the way back to the gate so he stumbles around, losing his shoes and clothes along the way. Those are some potent 'vegetables' I tell ya! Peter starts to cry, thinking fo' sure he is about to become Rabbit pie, just like his old man did, when along come some friendly sparrows (what was in those 'vegetables') who encourage him to just keep on runnin'. Old Mac almost gets him but Peter manages to hide in a watering can and Old Mac, who ain't as fit as he used to be, gives up and goes back to growing plants. If ya know what I mean ;)

After wandering around aimlessly for a while, trying to sober up and find his way out of the garden, he hears the sound of a hoe (that bit is straight out of the book!) and hides under a few bushes. When no hoes come by he climbs up on a wheelbarrow and sees Murderin Mac hoeing some onions (no idea what that might be a euphemism for, any suggestions?) and beyond Mac's sweating body, the gate to freedom!

Peter decides to throw caution to the wind and bolt for the gate. Mr. McGregor sees Peter out of the corner of his eye, but coz he was busy hoeing his onions he didn't care. Some things are just more important than capping a bunny's ass.

Peter gets back to his basement home, flops down on the floor and promptly passes out, still naked. Mrs . Rabbit's too busy cooking up something to bother dealing with him right then but she does wonder where his clothes and shoes are. Apparently this is the second time he's lost his clothes in a fortnight (that bit is straight from the book too! This bunny needs an intervention!).

The final page reads thus -
"I am sorry to say that Peter was not very well during the evening. His mother put him to bed and made some camomile tea - and she gave a dose of it to Peter! "One tablespoonful to be taken at bedtime." But Flopsy, Mopsy, and Cottontail had bread and milk and blackberries for supper."

See what I mean! It's full of filth and debauchery! And Dave is right. Shittest ending to a book ever. I did try to explain to him that there was probably meant to be more to the story after that, but as it's a Golden Book, and already quite long, they had to cut it off somewhere, but I have to agree, it is a bit shit.

From a kids point of view I would probably give this book 2.5 stars out of 5. While the pictures are lovely, it's a bit of jumbled story and Peter has no father which is sad. From an adults perspective, I would have to give it 3 stars out of 5, for it's creative use of euphemisms and innuendo which only the most twisted of minds (such as mine) can see.
Labels: Books IBOT Laughs Linky Lovin' Reviews

Zanni, Heart Mama said…
I was reading this to Elka the other day and completely agree! The tale of Benjamin Bunny is also atrocious. A poor Jemima Puddleduck! I think as a kid though I had a creepy feeling about Beatrix Potter. With Pooh, though, I find no fault. :) great post. X
25 September 2012 at 08:32

Unknown said…
It's up there with the horror lullaby "Rock Your Baby".

Ai Sakura said…
Oh my come to think of it Rock Your Baby is such a bad lullaby like Sophie mentioned!
When the bough breaks the cradle will fall, down will come baby cradle and all??!

Mandie said…
That made me laugh! I'm with you on these childrens' tales and songs, full of debauchery!! Haha! Whenever I read this, I will be reading vegetables, but thinking, "vegetables".
25 September 2012 at 10:59

Mel@Mellywood's Mansion said…
I need me some vegetable like that some days :) Enid Blyton, now there's a whole pile of wrong! stopping by via IBOT
25 September 2012 at 16:17

EssentiallyJess said…
I'll admit I had never read this version ;) I'd probably read it thinking about how hard Mrs Rabbit has it, and that she really needs to tighten up her boundaries, but then I always identified with Flopsy, Mopsy and Cottontail. :)
25 September 2012 at 20:23