So my gorgeous friend Kelly has started a blog. Handmade Tears and Triumphs is the name and MUST check it out. She is a super talented writer and he's been going great guns since I convinced her to jump in the blog waters. I highly recommend not only checking out her blog but paying specific attention to reading her post on body image (excellent, and made me stop and think),  her daughter A's birth story (seriously beautiful, if you'll love a good birth story then this one is for you), How to be a Superwoman (I love this post because it has some awesome ideas on how to fake being a superwoman!). So go on, I'll wait here while you go have a squiz.

Oh, and you should totally follow her too because she's ace!

So, Kelly joined a link up that is hosted over on Kirsty's blog, My Home Truths, called I Must Confess. Kirsty confessed her Top 5 fave TV shows and Kel has followed suit and I thought I would join in.

I must confess that I watch way too much TV when given the chance and so trying to pick only my Top 5 TV shows would be nigh on impossible, so instead I am giving you my Top 10! I did previously blog about my Top 5 Fave shows but that was about 2 and a half years ago and there are a few new ones that are hard to beat.

So, in no particular order, here are my Top 10 fave shows -

Friends - This will always and forever by my number one favourite show, no matter how many other shows I may say I love over the years. I've watched every episode multiple times and can basically relate most things that happen in life back to an episode of Friends. My husband feels this way about Seinfeld (which is also a great show but not sure it can make the top 10, it might be just outside it, say, at 11)

Alias - This is my second favourite show of all time (don't worry, the rest of the shows I list won't be in an order I promise, as they are all pretty much on a par with me). It has everything a girl could want, hot guys, action, a gripping, interesting and at times hard to follow storyline, which is just what I like. And the best part? Jennifer Garner and her kick-arse character Sydney Bristow. If I could be a fictional character it would be her. 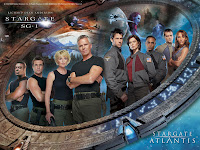 Stargate SG1 and Stargate Atlantis - Technically these are two different shows, but Atlantis is a spin-off of SG1 and there is so much crossover that I am listing them as one. I wasn't a huge fan of science fiction before I was introduced to the Stargate franchise and now I am much more open and enjoy it a lot more. Stargate had that ultimate mix of sci-fi, humour, action and adventure that I love. Plus, Atlantis had Colonel John Shepard. If I could marry a fictional character it would be him. 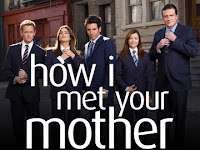 How I Met Your Mother - Love, love, love this show! It's so funny and in a way it is the prefect replacement for Friends. The go thing about HIMYM is the fact that they are just about my age so many of things they talk about and do on the show I can totally relate to. It's Legen - wait for it - dary!

Offspring - I didn't really get in to he first season that much for some reason but started watching again at the beginning of the second season and now I love it, Can't get enough of it. It's very funny, the Proudman family are complete nutbags, and I love the way Nina dresses. Being a total scar lover myself (I own more than one girl honestly needs and still want more!) I love to see what scarf she'll be wearing each week.

The Office - Hilarious. Dave and I hadn't really watched it before we went to the States in 2010, but while we were there we caught a few episodes and decided we must watch the whole thing from the start once we got back home. We ordered the first 4 seasons and almost wet ourselves laughing. Michael Scott is a total classic, and I didn't think they could possibly keep the show as good without him, but I must say that Andy Bernard has done a pretty good job picking up where crazy Michael left off. 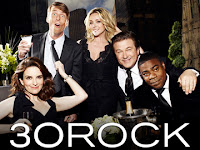 30 Rock - Another one we discovered in the US and that we got even more hooked on once we got home and bought the DVDs. I love the fast pace and 'smart' humour.It might look on the surface like it's really dumb with a lot of the gags they do but when you really listen to the dialogue, some of those jokes are comedy gold and take a bit of knowledge of the world to get. 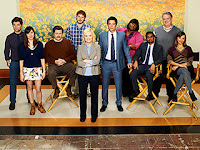 Parks & Recreation -This was the one other show (apart from The Office and 30 Rock) that we discovered while on holidays in the US. Amy Poheler(sp?) is hilarious as Lesley and every character, while far out and crazy stupid half the time, has a redeeming quality that makes you love them. And it has Rob Lowe. Rob Lowe! Reason enough to watch. Hope he stays. 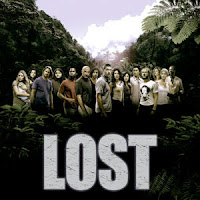 Lost - I started watching this from the start but then I had to stop, only because I wasn't able to see it every week and not living in a place where I could tape it, so it was too hard to keep up with the storyline. However I was just waiting for the DVDs to come out so that I could watch it episode after episode, in marathon runs if I liked, and really get the most out of the story's twists and turns. I was always going to love this as I pretty much love anything J. J. Abrams touches (see Alias above, and yes, even the Star Trek movie!) 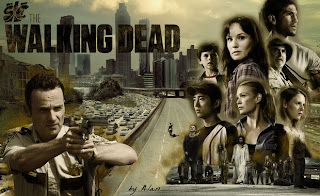 The Walking Dead - I saw this advertised on Foxtel when they were launching their new FX channel and I knew it would be something that Dave would like. He is very hard to please when it comes to TV watching, he doesn't like a lot and is very discerning of anything that isn't sport he'll watch anything sport-related!). So I set this to series link and once there were a few episodes recorded I told him about it and suggested we watch the first episode. Well, we loved it. I didn't expect to like it that much, as I'm not usually a fan of zombie stuff, but this is so much more, and if I close my eyes in the really gory parts it's excellent TV. One of those shows where i think about an episode days after watching it and wonder how I would cope being in that situation.

So, there you have it, my Top 10 fave shows. Honourable mention has to go to Survivor, I love watching Survivor, but it's not the kind of show I could whip out the DVDs and just it and re-watch, so for that reason it didn't make the list.

What are your fave TV shows?And have you checked out Kel's blog yet?
Labels: Entertainment Linky Lovin'

Kirsty @ My Home Truths said…
Kylie, thanks so much for linking up! I love your list. I will always love Friends (I laugh at every episode, regardless of how many times I've already seen it) and I was addicted to Lost for a while before it started jumping backwards and forwards and completely and utterly confusing me. I wish I could have got over the gory bits in The Walking Dead like you, because it's such an intriguing show, but I couldn't. Great list, thanks again for linking up!
12 July 2012 at 23:22

Kylie Purtell said…
You'r quite right. It must have been a very early promo shot from the first season. I did prefer Ronan to Ford, especially after he went nuts, but it would have been nice if they'd followed up and ended his story before the show finished, he was definitely a loose end.
6 September 2012 at 08:57

Krystle said…
Oooh we have a few crossovers. I love friends, and Offspring and don't mind Parks and Recreation. I'd have to add Six Feet Under, Sex and the City and Californication... and a little closet confession (eek!) Air Crash Investigation :-0 .
9 November 2012 at 11:39

Jackie K said…
Well I must confess I never did get the whole Friends thing - never liked it much.
But I do like a couple of your others. How I Met Your Mother, Parks and Recreation and The Office I agree, and I LOVE 30 Rock. I loved the first season of Lost (after that I LOST interest). The others I haven't seen.
Hmmm, even though it's 4 months later I might need to do one of these myself...
Thanks for the idea!
9 November 2012 at 13:26

Rhianna said…
I think that my favourite from your list is How I met your mother, I am a comedy kind of gal when I take the time to watch the dreaded box!
10 November 2012 at 00:26

Prue said…
I LOVE offspring, it's my favourite. And I was a big Friends fan when it was still around, totally rocked the RAchel haircut for many years.
Prue x
10 November 2012 at 11:02

Redcliffe Style said…
I love The Walking Dead. I have also just started watching Homeland. I thought it looked boring but it's awesome too. Rachel x
10 November 2012 at 17:07