1 trimester to go that is!

Yep, time is certainly flying by and I can't believe I am now 28 weeks pregnant and officially in the third and final trimester.

I've spent so long wishing it was November already that I am starting to get a little freaked out by how close November actually is! And with how busy we are going to be over the coming months I don't know how we are ever going to get everything ready for the baby in time!

We have made a fair bit of progress in clearing out the spare bedrooms so we can move furniture around and re-paint the room that will become the baby's, but it's one of those things where you basically have to make more mess to clean and clear the mess so at the moment it doesn't actually look like we have actually made as much progress as we have.

We picked up the baby's furniture on the weekend and now we have even more boxes in the house, but at least these are contained to the first bedroom, which doesn't need much done to it at all so they can sit there until the baby's room has been painted and we can put it all together.

We have decided to paint the baby's room the same green as our bedroom and once the baby is born I will put up some curtains, depending on the sex. Pink if it's a girl or brown if it's a boy.

I did the glucose tolerance test on Friday and apparently my sugar levels were a bit high so I have to go back on Monday and do an extended test after eating a hi-carb diet for three days beforehand. The hi-carbs I can manage. It's the fasting from 9pm Sunday night until after I've finished the test (which involves arriving at 8am, having blood taken, then drinking the glucose drink, then sitting there for an hour before a second blood test, and then sitting there for another hour before a third lot of blood is taken) that is going to prove the most difficult. How they can expect a pregnant woman to not eat for almost 14 hours and have three lots of blood taken within two hours and not pass out is beyond me, so it will be interesting to see how I feel once it's finished. Gonna have to take some food and juice with me I think!

Apart from that everything else has been going ok, although if you really want to know, I do have a polyp on my cervix which has been the reason for my bleeding on and off the whole time. It shouldn't cause any problems and it's definitely not cancerous (thank God!) and I must admit it was a relief to finally get an answer on the bleeding and have a reason for it that had nothing to do with something being wrong with the baby.

I've booked in for acupuncture in a couple of weeks, a friend of mine has had it during both her pregnancies and credits it for helping her go into labour a bit before her due date (my due date is 23/11/11 but i'd love a baby birthdate of 20/11/2011, wouldn't that be cool!) so I will also be getting the labour encouragement sessions as I get closer to D-day. Jacinda specialises in obstetric acupuncture and is also a doula so I am really looking forward to seeing how it goes. If you've had acupuncture during pregnancy I'd love to hear about it and what you thought and how it went.

I've also been reading Juju Sundin's Birth Skills and to be honest it has me a little excited about it all, I'm nowhere near as nervous about labour as I was a few months ago before I read  it. To be honest, I'm starting to get more nervous about the whole being responsible for a newborn baby more than the actualy labour and delivery. We've killed so many pets that I just can't believe they are going to let us take a real baby home! Argh!!!!

Antenatal classes start next week though so hopefully they will help me feel a little less nervous about it all. 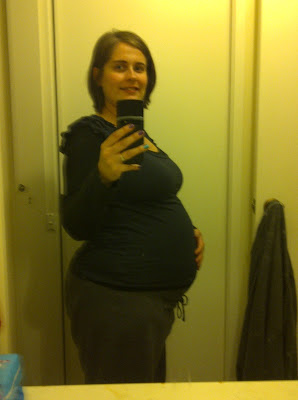 I'll leave you with a pic of my 'bump'. It's not very good quality, I took it to send to Dave's sister who is living over in Canada at the moment and I didn't realise how pregnant I actually looked until I put the pic on the computer, it's a little scary how big I already am and I still have so much growing to go! I'm gonna be the size of a small barn come November!

P.S. I've been verrry slack on the blogging front lately so I'll try to post a bit more often in the next few months, life has just been so hectic that when I get home from work the last thing I've felt like doing is going on the computer and weekends have been all about the cleaning and organising!

Amy said…
Look at that gorgeous bump!! :) It's so exciting that you are getting close to the end.

In both my pregnancies, I failed the GTT test the first time around. With my second, I had the test about a week after Easter, I was destined to fail :P It came out alright the second time. I did feel really awful after them though, have you got someone you can can call after the test to take you home if you need?

With labour nerves, I also found the closer I got to the end the less nervous I got- like my body was going 'Okay, we've got it get this person out!' and sending good, positive hormones through my body. You'll do just great- your body knows what to do, the baby knows what to do, it's just your mind that has to relax! :)

Talia said…
Looking good! I had to the blood glucose test as well (already), but thankfully I passed, so I won't have to do it again until later on!

I'm quite excited about giving birth too- isn't that weird! I hate telling people, because they're all "You have NO IDEA how much it will hurt... blah blah blah". But I'm excited to try out the things I've been reading and see what my body is capable of!!