Today I trekked into the city with my Mum and sisters to see Mary Poppins at the Capitol Theatre.

I got in nice and early, an hour before the matinee kicked off, so that I could take my time walking from the car park to theatre and could grab a decaf coffee.

Despite the 'breeze' (some would say gale!) the sun was nice and warm and I only ate my hair a few times!

The show was fantastic! I really enjoyed it and so did everyone else. Verity Hunt-Ballard played Mary Poppins and she was really good, you could tell she had seen the movie a few times, she had Julie Andrews moves and mannerisms down!

Marina Pryor was excellent as usual as Mrs.Banks and the kids who played Jane and Michael were also good. I was a little disappointed with Matt Lee as Bert, but the fabulous Dick Van Dyke is a hard act to follow and he did a gallant job of trying to fill his shoes.

The only other thing that was a little disappointing was the dancing, particularly in the chimney sweep roof-top sequence. That is one of my favourite parts of the movie, and the dancing in that sequence is just out of this world so I expected a little more from the dancing in the show. But apart from that I really enjoyed the show and I would highly recommend, even if you were only slightly impressed by the movie.

After the show we headed over to the Meat & Wine Co. in Darling Harbour for a lovely dinner. We had a bit of time to kill so we had a quick wander through the Harbourside Shopping Centre so that we could use an ATM and find a bathroom (I swear this baby is sitting directly on my bladder!).

While I was in the bathroom my sisters were in Cotton On Kids and found some super cute baby T's, which, I have to admit I just couldn't resist, esepcially at 2 for $20. Considering I haven't actually bought anything for the baby yet apart from a couple of finger puppets I found in Ikea, I don't feel guilty about spending money we really don't have. But, hey a baby's got to wear something right!

Dinner was lovely, I had the ribs and chips, satisfying my craving for some crunchy hot chips. I just can't seem to get enough of potato these days!

All in all it was a really great day and I really enjoyed spending it with my lovely sisters and Mum. Special thanks to Mum for getting me the ticket and paying for dinner as my birthday present. 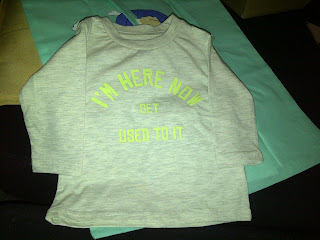 Amy xxoo said…
a) Glad you enjoyed the show - i love me a musical!
b) yes the baby probably IS sitting your bladder and will stay there til its born...
c) dont worry about not buying much for the bub. We couldnt afford to buy too much either but your friends and family will buy soooooooooooo much stuff that you wont know what to do with it all!
11 July 2011 at 07:31