10 Movies that Were Better than the Books 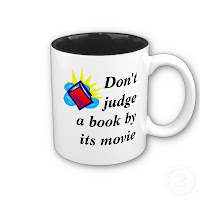 I've mentioned before that I am subscribed to get an email every day from a blog called The Best Article Every Day. Sometimes they are good and other times I don't even bother to read them I just delete them (like the one about new credit card laws in the States. I don't need to read about that thankyou!).

On Tuesday, the blog post was 10 Movies that were Better than the Book and it was pretty interesting and got me thinking. Usually books are better than their movie counterparts for a number of reason, but the ones they've listed, although not having read and seen all of them, I would have to agree with most of them.

Their list was -
10. Blade Runner (Director's Cut) based on a novel by Phillip K. Dick, Do Androids Dream of Electric Sheep

9. Fear and Loathing in Las Vegas based on the book by Hunter S. Thompson

8. The Shining based on the book by Stephen King

7. The Last of the Mohicans based ont he novel by James Fenimore Cooper

6. The Bridges of Madison County based on the book by Robert James Waller

5. The Godfather/ Godfather Part II, based on the novel by Mario Puzo

4. The Lord of the Rings Trilogy, based on the novels by J. R. R Tolkien .

3. The Maltese Falcon, based on the book by Dashiel Hammett

2. Fight Club by Chuck Palahniuk, and

What do you think? Do you agree with these ones? I'm totally on board with Fear and Loathing in Las Vegas, the movie was brilliant, I did enjoy the book, but I thought the movie was definitely better. Another one I think that was better than the book was Twilight, only because it only took two hours to watch as opposed to triple that to read it...and it was an excruciating read as I've mentioned before!

As a rule though, the books are nearly always better. One book that was better than the movie, the movie of which was brilliant, is Forrest Gump. If you loved that movie you must read the book, it's fabulous and even more crazy in the things he gets up. The part in the book when he is in the army adn his punishment is to work in the kitchen, fall-off-you-seat hilarious!

What are your best and worst book-to-movie's?

Unknown said…
Hmmm... I'm gonna say that Peter Pan was a better book than movie, as was The Beach. I've been meaning to read Forest for a while now.

And twilight- such a good story, such a drudgery to read. I really want to hear the story again, but just can't bring myself to read the books again.
12 March 2010 at 15:39

Kylez..aka...Mrs.P! said…
Oh Lori, I am exactly the same with Twilight, great idea, love the 'love-story' but the reading of the books was just painful! They have to be some of the worst-written bestsellers around. I would love to read them again, but I just can't waste that many more hours on them! I'd rather clean my house!

I've always wanted to read The Beach as I thought the movie was interesting but that the book would be better.
12 March 2010 at 16:16

Kellyansapansa said…
Interestingly, there's nothing on that list that I have both read the book and watched the movie. I tend to mostly do one or the other to avoid disappointment!
12 March 2010 at 17:28

Bill said…
The Godfather is the only one I'm qualified to comment on, and the movie is far better than the book. The film leaves a lot out, and everything it left out should have been.

Puzo made no secret of the fact he wrote it for the money and it's fairly clear from reading it, which bits have been thrown in as salacious nonsense to make it sell more.

The book works best now as a commentary on the films. For instance, it explains what "going to the mattresses" means where the film just mentions it idly. But I think it's a better film for not explaining the whole back-story and letting the viewers discover it for themselves.

Did you see the Book Club on Tuesday? They were talking about films of books and commented on how the film of One Flew Over the Cuckoo's Nest, the made it from McMurphy's point of view, while the book is narrated by the Chief. They suggested that this was necessary, since it would be impossible to portray on film what was going on in the Chief's head. I disagree. I think Ron Howard could pull it off in a similar way to what he did with A Beautiful Mind. What do you think?
12 March 2010 at 23:25

Farmers Wifey said…
I would say most of the Stephen King books I have read have been much better than the movies..except for one called The Mist which was great.
13 March 2010 at 00:05

carly said…
the notebook i loved the movie just that little bit more {but that could be my fascination for ryan gosling}.

my sisters keeper i feel they totally ruined. but thats just me..actually another uni student and me were talking about how terrible it was. book is better.

i never knew that american pyscho was a book. i have seen the movie. which was a little out there {must admit i watched it when i was 17 i think..}

Kylez..aka...Mrs.P! said…
@Kelly - I know what you mean, I am very reluctant to see film versions of books I love!

@Bill - I think in this day and age you can do anything on film, and as you suggest, it could be done in a similar way to A Beautiful Mind. I think in the end it comes down to whether or not telling the story from another point of view on film enhances the story or not, and in a lot of circumstances i don't think it does, I think it confuses the narrative too much and you lose the essence of what made the book so fabulous in the first place.
For me, I really hate it when they do things like change endings to satisfy the studio big-wigs - case in point - My Sisters Keeper, I haven't seen the movie but my sister has and from what I've been told about the changed ending, it ruins the central theme of the story and completely changes the story, and also takes away a lot of the impact.

@Famer's Wife - I haven't read a lot of Stephen King, but I do find with a lot of horror books the movie can never be as good or scary as your imagination is while reading a scary book

@Miss Carly - I haven't seen or read the Notebook but my sister just bought the book and tells me I have to read it so I think I will have to add it to the list, for sure. Everyone I know loves the book and movie. I'm with you on My Sisters keeper even though I haven't seen it, I don't intend to because of the changed ending.
18 March 2010 at 14:05