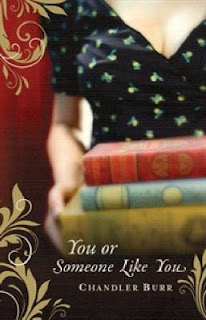 I have been meaning to write this review for a while, but things have been a little hectic at work, so I haven't had much of a lunhc break and by the time I get home, I've been feeling pretty lazy. (Needless to say I haven't done much exercise I'm ashamed to admit).

So anyway, You or Someone Like You. This was a pretty good book. It took me a few chapters to get into it, but once I did,  I really started to get caught up in the story.

Anne is the quiet, clever but generally overlooked wife of a powerful Hollywood producer. Inadvertently, and somewhat to her own surprise, Anne starts a book group for a small group of her husband's colleagues in the movie industry. Like a modern day Scheherazade, she tells the book group stories - about books, writers and reading - and talks about how these stories can shape our lives. The movie moguls fall hard for literature, and like topsy, the book group grows and grows, in size and numbers and influence, until somthing unexpected and terrible happens, and Anne finds her life ad her marriage falling apart. Determined to keep her family - her husband, Howard, and their much-loved only son, Sam - together, Anne fights back the only way she knows how, through literature.

This is much more than a story about books. There are plenty of books, and lots of literary references, as you would expect, but it's about much more than that.

What the blurb doesn't mention, is that the book has a steady secondary theme of religion, Judaism to be more precise. Howard, Anne's husband, was born and raised a Jew, and when Anne and Howard first meet and fall in love, Anne's non-conversion is not a problem to Howard (although it is big-time to his family). It is this religious issue that forms the basis for the family's crisis years later though, and Anne uses her books to reach out to her husband when talking doesn't work. The issue of religion fits perfectly with the literature theme, and while Anne teaches her book group about how these works of literature can shape the world, but that are also a reflection of what the world is, she finds herself, and her husband, once again.

I stuggled through the first chapter or two to follow the writing. It kind of bounces around, and segues from one thing to another until getting back to the point, and it was a little confusing until I got used to it and read it the right way. After that, it was a breeze and I realised that it's written, sort of the way I talk, or how a lot of people talk I spose. When I tell a story, I often end up telling so many little side-stories as I go along that I can sometimes forget what I was talking about in the first place. This books was a little like that, but you always got back to the point by the end of chapter and after a while I really enjoyed that.

I found myself warming up to Anne, the more I learnt about her and I was pretty keen to get to the end to see how it would all work out. Which is always a good sign, when you're anticipating what's going to happen so much. If you like books like People of the Book by Geraldine Brooks, or your fiction a little more thought-provoking than usual, then you should like this.

PinkPatentMaryJanes said…
This has now rocketed to the top of my to-read list. Great review - thank you!
9 February 2010 at 13:43