What About the Non-Smokers

There is a story going around today about how the Health Dept. has decided to ban employees from smoking at any time during the day when they are working, except on meal breaks or before and after work. And when they are smoking, it must not be within 15 metres of the workplace. 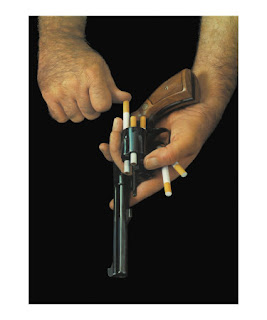 Civil liberties experts and lawyers are calling it possibly unlawful and a heavy-handed measure. I wonder, if those quoted in the story, Terry O'Gorman, President of the Australian Council of Civil Liberties, and Nick Duggal, a solicitor specialising in employment law, are smokers themselves? Just asking.

The way I see it, when you are at work, you are being paid to work and not do anything else. If you can't make it to lunchtime and then hometime without a cigarette, then that's your problem, not your workplaces! Tough luck! Non-smokers don't go stand out the front of their office for 10 mins at a time becasue they 'need' to. If you add up all the smoke breaks over a week, it's probably equivalent to an hour, if not more, so why should they get paid for that time, when if it was a non-smoker just sitting around for 10 mins doing nothing they would probably be reprimanded.

And I really don't understand the problem with making them smoke at least 15 metres away from their place of employment. They are health workers for Pete's sake! There are probably sick and vulnerable people around their workplaces that should not be exposed to second-hand smoke. Not to mention the hypocrisy of a health worker smoking.

I have nothing against smokers, as I used to be one myself. But not once did I go on a break purely to have a smoke because I was addicted. It never even crossed my mind, because as far as I was concerned, smoking was something I chose to do and if I couldn't handle my craving between meal breaks, home-time, etc, then that was my problem, not my employers. I smoked before and after work and during my lunch break and nothing more. Granted I chain smoked during my lunch break, but at least I wasn't wasting actual work time tending to an addiction which was my own damn fault in the first place! I don't think I really believe smoking should just be outright banned, but neither do I think smokers should be given special considerations and allowances for something they don't technically have to do. Coz it really ain't gonna kill them not to have a cigarette every hour, but it might just save their life!

''People who are addicted to smoking would be, in effect, forced to have an uncomfortable, and some would say worse than uncomfortable, working day simply because they're employees of the Health Department,'' Mr O'Gorman said. Well, boo-fucking-hoo, imagine having to be uncomfortable because of something that, in the end, you chose to do!

What a crock of shit! I hope they don't back down and enforce the policy.
Labels: Politics n Current Affairs Ranty McRanterson

Sarah. Splish Splash Designs said…
I agree with you. It also used to annoy me when all the coffee drinkers would go off and get coffees constantly during the day. Sure, I don't drink coffee, but how is it fair that coffee drinkers and smokers can have SO much time away from their desks???
12 January 2010 at 14:58

Megan Blandford said…
Ooh, this is a pet-hate of mine. I hate smoking, with a passion. I worked in Human Resources and always had people coming and complaining about people taking smoking breaks. And it really bugged me too. I knew someone who started going and standing outside for 10 min breaks at regular intervals just to make a point. Funny.

I'm also very against people smoking near doorways, which happens all the time near shops and things. And at outdoor eateries. I'm very vocal about it, especially if their smoke comes near my toddler! I mean, why should she be subjected to breathing it in??
12 January 2010 at 14:58

Oana said…
Sounds like common sense to me, and I totally agree with you! I don't have anything against smokers, I was in that place too, a while ago...it's all about respecting others in the end
12 January 2010 at 16:23

Anonymous said…
This has come up in the UK a lot since the smoking ban was brought and particularly in relation to health care staff smoking in their uniforms on their breaks and then returing to care for people smelling of cigarettes. That's disgusting.

Years ago I worked in a pub and smokers used to take a ciggy break all the time. When I complained to the manager that I wanted as many coffee breaks, I was told no I couldn't and if I wanted that many breaks I should take up smoking!! Can you beleive the nerve?

Mia said…
I've no sympathy for smokers. Alcoholics and gamblers don't get extra time to cover their addictions.
16 January 2010 at 14:38