Stop Looking in the Mirror and Start Living 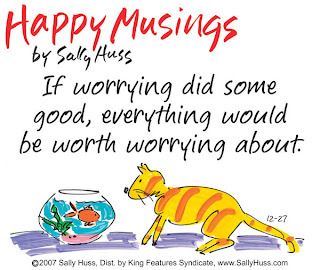 I am so friggin over the whole 'body image' issue/crisis/money-spinner/debate it's not funny!

Can they just give it a rest already???

In the end, it doesn't matter a lick if you're good looking, fat, skinny, wear the most fashionable clothes or dress like a dag. All that matters is that you're healthy, happy and a good person. And NO amount of fashion is going to make you happy or a good person. I'm sorry, but its not.

Every other week there is another article or feature on the whole 'body-image' thing. Everybody is jumping on this 'real women' bandwagon and it has to stop. For starters, there is NO SUCH THING as a 'real woman' in the sense that its used by these magazines and body-image advocates. The last time I looked, a 'real woman' was someone with the reproductive organs of a female. Not someone who happens to fall within the average weight-range of women.

I understand the campaign for magazines to be more aware and representative of different body shapes and sizes, and to cut back on the air-brushing. I get that. But all these 'body-image' campaigns have done is give magazines a new way of making more money and getting more readers. They don't give a shit whether their magazine is actually contributing to or fighting against the 'body-image crisis'. All they care about is making money. And by constanty bangin on about it we are giving them a way to do that. Because they know it will sell magazines.

Perhaps if women stopped worrying so much about what they looked like and started worrying about more important things there wouldn't be such a 'body-image' crisis. The simple fact of the matter is that in the end, its not only the magazines that have created the 'crisis', it's we ourselves. By being so obssesed with celebrities and fashion we have cultivated the myth in our own minds.

Women have been unhappy with their bodies since the dawn of the time. Its a fact of life that no-one is perfect, no matter how much we may like to be. By harping on about the whole 'body-image' issue rather than focusing on things that are more important, such as being healthy, we are coninually bringing to the fore of our minds issues with our bodies.

I read a good article on the Sydney Morning Herald website today by Clem Bastow. I urge you to read it. Click here for the link.


It's imperative that women stop defining ourselves by our body shape. There are simply more important things to worry about - pay issues, maternity leave and sexual violence spring to mind - and better things to celebrate, such as our minds, hearts and work.


Clem is exactly right. My personal feeling is that obsessing about positive body-image is as damaging as ignoring the fact that every woman in these 'fashion stories' (I just see girls playing dress-ups!) is very skinny and air-brushed to the hilt. Its just another way of re-inforcing the idea that our worth is only measured by the shape and size we are. Whether we realise it or not, this is what we are teaching the next generation of young women, that they should be worrying more about body-image than being healthy and a good person.

PinkPatentMaryJanes said…
I loathe how it always degenerates into personal attacks - "not real women" vs "let themselves go". Erk. As the mother of a 10 year old daughter I hope she feels confident in her body and her mind. I want her to be happy and have just the right level of self-esteem. Luckily I've got a group of friends of varying shapes, sizes, fitness levels etc who are are gloriously comfortable in their skin - hopefully they'll be her role models {with me as the main one!}.
5 January 2010 at 15:49

I've actually stopped going to Mamamia because of this "real woman" bullshit.

Guess what? I'm a naturally petite woman, a size six and yet, I'm just as real of a woman as my size fourteen best friend!

I could seriously add on to this but the whole topic of coversation drives me up the wall. I think what you've written here is great.
5 January 2010 at 23:39

Talia said…
This is SO good. I totally agree with you. i was talking with my mum the other day and we were deciding that if we want to loose weight, or gain weight, or whatever we want to do, it should be because of something we actually want to do, not something society tells us to do. And there is no such thing as a real woman! Thanks for posting this- you've articulated a lot of my thoughts a lot better then I could!! :-P
6 January 2010 at 10:33