The Decade that Was

Well everyone else was doing one, so I thought I would too. 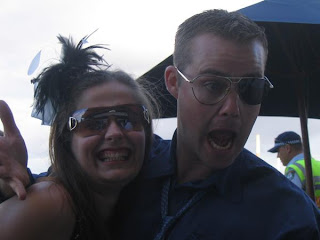 So that was my decade in 30 points or less!

Before I go I just want to ask you a question. You know how there are things that happen in history, where you will always remember exactly where you were and what you were doing when you first found out?

My memory like that for the 90's would be finding out Princess Di had been killed. I was 15 and my grandmother's church's 50th anniversary when I overheard her saying to someone how tragic and sad something was, and those poor boys. From what I could gather I thought she might have been talking about Princess Di. I went and found my Mum and asked her and she told me, she'd been killed in a car accident. I think the reason I remember it so well is because Prince William and I share a birthday, and all I could think was how horrible it must be for him, to be 15 and his mothers has dies, thought about how I would feel if it was my Mum. Sad day.

There were moments like that in the noughties too. The three that stick in my mind are -

So that's it. What are your moments in history that you'll always remember where you were when you first heard the news?

Kylez..aka...Mrs.P! said…
See I was wondering about that! I was under the impression that 2010 would be the last year of the decade and then everyone started going on about it. I remember in year 11, 1999, and everyone was carrying on about the millenium, and my English teacher said that the first year of the new millenium was actually 2001.
31 December 2009 at 14:56

Bill said…
There are mathematical decades and cultural decades. Of course the century and millennium began with 2001, but tell people that 1990 was the last year of the 80s and they'll look at you strangely, even if they get the point. Since the 80s couldn't finish soon enough, I'm happy to give them that one.

To answer your question, my first such moment was the murder of John Lennon. Although I had heard of the Beatles at the time, I wasn't old enough to know them all by name. I remembered it first because it was my first experience of mass shock at an event. And I also remember it for it prompting a mini-lecture from Dad about how this is why he wouldn't let me play with toy guns.

With Sept 11, I was doing much the same as you, only I was watching The West Wing. These days, I guess it's easier to know what we were doing because it's usually sitting around a TV screen.

I remember where I was when I heard about Michael Jackson because I was at the airport waiting to meet my dearest, so it was already an emotionally busy day.

By the way, I know where I was when you were born. I was sick that night and as a treat, I was allowed to keep the radio on all night and they had hourly updates.
31 December 2009 at 19:45