Someone remind me NEVER to go to Centennial Park when I become a Mum for a lovely day in the sun! If I want to keep my self esteem in tact that is!

So today was my good friend's birthday and it was decided to spend the day in Centennial Park (gorgeous parklands in Sydney) having a picnic lunch.

The day didn't seem like it was going to be the best when I got up, all overcast with a hint of rain in the air, but I packed my little esky and my picnic bag with some left-over silverside from Saturday's dinner, some Mammee noodles in case my sandwich wasn't enough and some Verdi and choccy goodies I picked up on the way to my friends (not to mention the really nice Vanilla Latte I picked up from Donut King...who knew they made coffee? And it's not bad! Better than Gloria Jeans anyway, which always leaves me feeling sick and bloated, but you didn't want to know that did you? I didn't think so!)

Anyway, as I was saying...we headed into Centennial Park and despite the overcast-ness it was still nice and warm (forgot the sunscreen though, so I look like a bit of a clown with my sunglasses shaped tan!), so we spread out the picnic blanket near the 0-5 year old playground.

Being a Monday we had assumed it wouldn't be too busy...we were wrong! The park was filled with mums and bubs of all varying ages and varying degrees of designer clothes!

We simply could not believe what some of these women were wearing To.A.Park!

Honestly the shoes that one woman was wearing are not appropriate footwear for daylight hours, let alone chasing your kid around a playground! They were the highest wedge-heels I have EVER seen, she looked like a ballerina wandering around on point!

We got to talking about these women and who they were and what they (or most-likely their husbands!) did that would afford them the time to hang out at the park, dressed to the nines.

We figured they had to be one of three things...

1. Ladies who lunch with bubs - The trophy wives of executives, meeting up so their kids could have a play and get tired-out before handing the kids over to the nannies and heading to their long lunches (a major generalisation I know, but hey, we're 'westies'!)

2. The Nannies of said LWL's - All young with disposable and large incomes (thanks to the executives) that it doesn't matter if you wear your best clothes and shoes to the park as you can afford to buy more with the next pay check. (And they can also claim worker's comp when they break their ankles in ridiculous heels at the park!)

3. Ordinary Ladies who feel pressured by the LWL's - and so feel that in order to show their faces at the park they have to get dressed up so they won't be looked up-and-down and laughed at, when what they really want to be wearing is something closer to their kids (their kids were wearing the usual shorts and t-shirts, covered in dirt, the kids of the LWL's were wearing exact replica mini-me outfits of the mothers with not a speck of dirt insight...how is that even possible?!?)

It must be hard enough to be a mother with all of the female competition that goes on between us, not to mention what it must be like when you start comparing kids and parenting notes, but I can tell ya, I will never be going to that park when I'm a Mum and just want to spend a bit of time playing with my kids (or letting the kids play, anyway) unless I want to feel really bad about the way I look. It's not worth it.

When I have kids I want to be able to have fun with them and roll around in the dirt without worrying that my clothes will get ruined, I want to be able to run after them without the danger (or increased ten-fold danger) of breaking an ankle because I'm doing it in 10-inch heels. It might be good for some mum's but it's not for me.

The money would be nice though.

P.S Check-out the awesome cake one of our other girlfriends made...it's us, at the park! We were even edible! 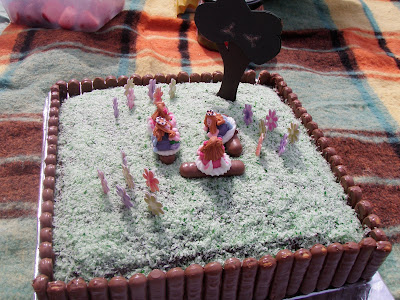 It's a bit blurry, but this is us 4 girls, enjoying our picnic lunch at the park! 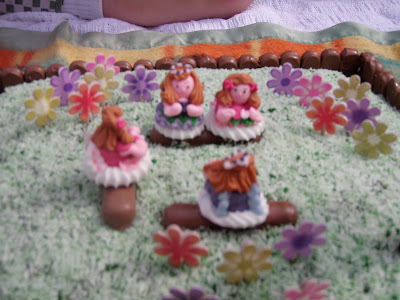 Maybe the mums are just using any outing as an excuse to wear some nice clothes? I know that I only get to go out about twice a week and I normally save my nicer clothes for it. I don't know why else they would bother.
21 September 2009 at 21:38

Alycia said…
Perhaps they had been out shopping or something and stopped at the park to appease the gang??
21 September 2009 at 22:11

Little mimoo said…
ha! that is a funny post. You just have to find the right parks to go to as they are not all like that, but it is a shame you missed seeing these parks in the winter months, as the 'look' of these ladies was knee high boots tucked into designer jeans and these boots I suspect were probably worth more than their nannies cars....you can still be one of those roll around with your kids mums but you will just have to seek out the parks and like minded mothers to do it with!!! plus I think these ladies are trying to overcompensate for something else if they have to go to all that effort....
21 September 2009 at 22:17

Ronnie said…
My kids were playing soccer last spring and I remember seeing a lady all dressed up, hair just so, and spike heels on....and she was carrying a baby carrier. So I'm walking past her in my jeans, t-shirt and tennis shoes/birks. My hubby actually notices the lady and was like "Give me a break..." We never could decide why she was dressed like that.
21 September 2009 at 23:11

Nανєєη said…
nice cake looks yummy ... Over dressed for the occasion , one cant pull it off unless he n in this case she has the majority on her side
22 September 2009 at 03:37

Elissa said…
It seems like a very accurate description to me, very funny and I completely agree with you. I also want to be the kind of mother that plays with my kids and not worrying about anything else.