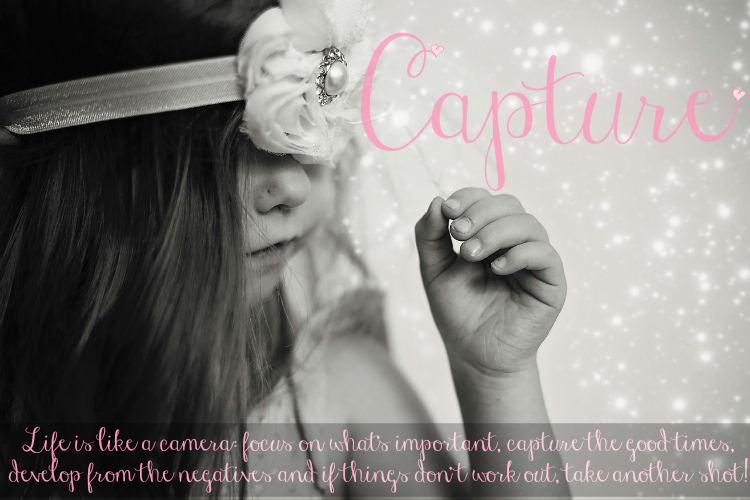 At the beginning of the year, like many other bloggers and people around the world, I chose a word. A word that would hopefully lead me, give me inspiration and guide me through the year. The word I chose was Capture. Six months on I think I've managed to capture all of the things I wanted to and more.

My reason for choosing the word capture was two-fold. The first thing I wanted capture to represent for me was...

"to gain control of or exert influence over my mindset in regards to organisation and exercise/weight-loss."

If I'm perfectly honest, I haven't been going great with the first part. I am a lot more organised thanks to Tafe, but the weight loss? Haven't even been thinking about it, my mind has been consumed with Tafe and everything that needs to be done to keep on top of things.

The second reason I chose capture though? I've been nailing that.

"In 2015 I want to capture as many moments and emotions through the lens of my camera as I can. I want to create images that are thought-provoking, that manipulate the viewer's emotions, that make them feel something, even if it's just a fleeting scent of happiness.
I want to capture my photographic ability in a measurable way so that I can see how much I really know and how much more there is to learn. Not that there is ever going to be a time when there isn't something I want/need to learn about photography!"


A few weeks after I wrote my One Word post I started my weekly One Perfect Moment series. A post I write every Monday remembering something that has happened through the week that I'm thankful for. Big or small, perfect or imperfect, it's been a really good way to stop and think about the week just gone and appreciate what has been going on in my life. It's just about my favourite post to write now, and considering I even managed to find a One Perfect Moment post out of a full-family bout of gastro, you know the attitude of gratitude has firmly set in my life now!

I've also been taking a portrait a week, every week, of the girls so far this year, as part of the 52 week project. It's been really fun taking these photos each week, and trying to come up with new ways of photographing the girls, especially when we've been doing the same old thing and I haven't had anywhere new or interesting to take photographs of them.

The other thing I decided to do was to continue on from my preliminary Tafe course and go straight in to the Diploma of Photography. The original plan had been to wait until 2016 before undertaking the Diploma, but after enjoying Skill Set so much Dave and I decided it was best to just go for it, jump straight in to Diploma and get all of my study finished this year.

Doing my Tafe course has really shown me what I do and don't know, how much there still is to learn, and has really confirmed for me that photography is want I desperately, passionately want to pursue. I've been loving it and I've learned so much in just a short amount of time.

So all in all, I'm pretty happy with how things have been going with relation to my one word for 2015, Capture. I'll leave this post here with some examples of the work we've been doing at Tafe this year and the things I've been learning.

HandbagMafia said…
Wow, you're doing amazingly. I absolutely love the Hue and You self portrait- so creative, what a great concept. You've got a real flair.
14 July 2015 at 07:58

Deborah said…
So beautiful and you are really capturing 'things' in those images which I probably would not normally even see!
14 July 2015 at 09:36

Janet aka Middle Aged Mama said…
Love seeing not only what you've been doing, but reading what is actually going on behind the scenes of each photo. I think you've captured it nicely! I didn't really have a word for this year - all I know is it's been pretty epic so far, with a 25th wedding anniversary, our first trip to Europe, hubby being made redundant and landing another job before he even finished up!

Hugzilla said…
Wow Kylie, how nifty are those little tricks! How cool that you are learning all this wicked photographer wisdom. Keep kicking ass this year x
14 July 2015 at 22:05

AParentingLife said…
Your photos are so amazing. I think it is so awesome the way you are following your dreams. So inspirational. Leaving some belated fairy wishes and butterfly kisses from #teamIBOT
19 July 2015 at 22:52