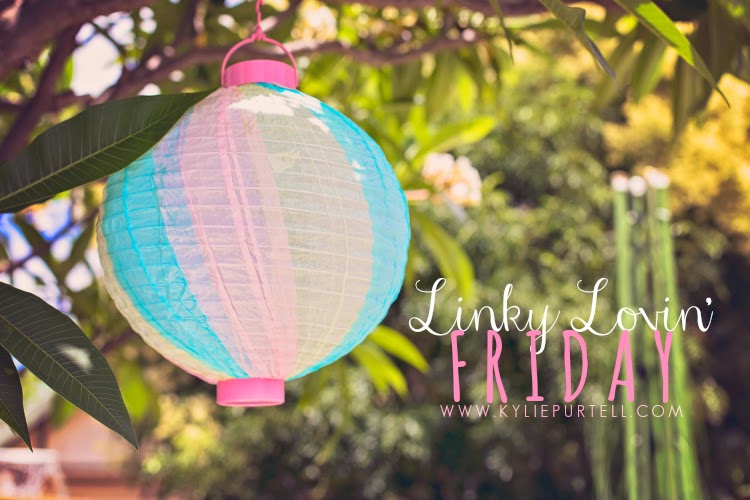 Another hectic week has gone and I am looking forward to the weekend. No alarms to set, nowhere to be. Just hanging with my girls while Dave works, playing, cleaning, just being. I've made a vow that there will be no TV this weekend. Well, not for the girls anyway. Our usual night time viewing of the Night Garden will remain, but as for any other time? Nada.

With the influx of Tafe work that needs to be done at home, I've definitely been guilty of using the TV as a babysitter this week. It's allowed me to get things done, but at the same time I can see the detrimental effect it has on Punky's beahviour by the end of the day. Even if it's just a bit in the morning and the middle of the day while Zee is sleeping, it's definitely causing some issues and I'm making a vow to change things.

I myself have been loving MKR this week. Colin! I just love his judging style. It's honest, tough, but fair, and I love it. I've really enjoyed watching him doing this round of instant restaurants and to be honest, you wouldn't see me crying if they gave ol' Pete the flick and gave Colin the regualr gig of judging the instant restaurant rounds. Even Dave, who isn't a massive fan of MKR, but watches it because I do, has said how much better he thinks Colin is in judging and giving feedback.

But enough about MKR and on to the links. I've had to recruit a little help scouting this weeks links as I've not gotten around the world wide web as much as I usually like. So I've shared my three fave posts for the week, as well as included 3 links from the fabulous Rebecca who blogs at Seeing the Lighter Side of Parenting and History of Parenting (if you haven't checked out either of Rebecca's blogs before you totally should, History of Parenting especially has some really fascinating stuff!)

My fave three links for the week that was...

The (ahem) magic of parenting by Talking Frankly
I know I have been guilty of sometimes glossing over the realities of having children when talking to soon-to-be-parents. And I've also been guilty of perhaps underselling the sometimes harsher relaities of life with tiny humans underfoot. I loved this post by Alison at Talking Frankly because I think she has summed up the 'magic' of parenting in only a way Alison could. So worth a read.

Screen Freedom | Why go screen free? by Maxabella Loves
I think the second paragraph of this post sums up why I liked this post from Maxabella pretty well and it needs no further introduction.

100 Photographers to watch in 2015 via Clickin' Moms
So many amazing photographers, so much inspiration. If you love looking at beautiful, heartfelt or inspiring photography then you'll definitely want to get lost in this list of fabulous photographers.

And my Linky Lover, Rebecca's picks for the week are as follows...

Six Stupid Myths about Mummy Bloggers: BUSTED! by Hugzilla Blog
Hugzilla totally nails this and smacks down six of the most common myths of the Mummy Blogger.

You know you are middle aged when... by Mumabulous
Another blogger who nailed it this week, I'm pretty sure you'll be able to relate to at least one or two of these, even if you don't consider yourself middle aged yet!

Medieval Surfboards by My OBT
The designs on these surfboards are so beautiful. I had no idea that surfboard art could be so cool.

So there you have it, mine and Rebecca's top picks for the week.

If you'd like to be a Linky Lover for a week and contribute your own three 'pick of the links' one week, let me know in the comments. I'll let you know at the start of the week that you're going to be my Linky Lover and then message you via FB on the Thursday arvo/evening to grab your links from you.

Have you read anything cool lately? Hit me up with your links in the comments.

Kirsty @ My Home Truths said…
Loving the links as usual. Enjoy your screen free time with your girls this weekend x
27 February 2015 at 12:02