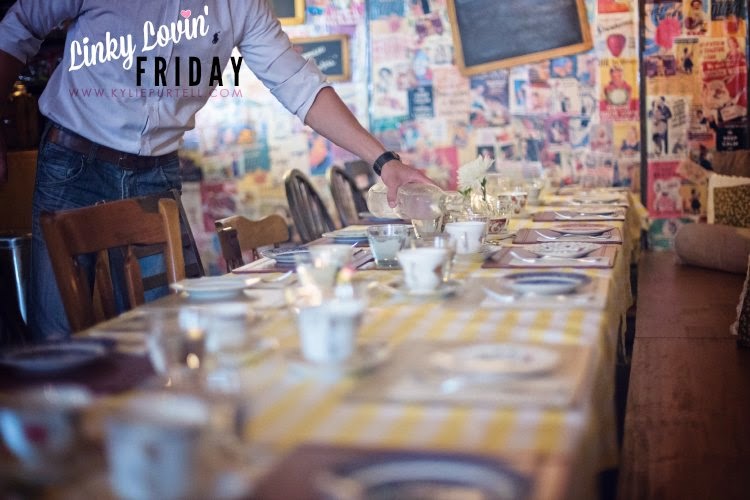 I am standing on what is about to be my biggest week of the year and I am paralysed with all that I have to get done! Isn't it funny that when we have the most to get done we spend the most time procrastinating and putting it off!

Punky turns 3 on Sunday and so tomorrow we are having a little family sausage sizzle to celebrate. There's probably around 30 people coming, and to most people that isn't small, but when you consider that all bar 10 of them are family, well, you get the idea. With Dave and I both being one of 5 kids, we can't do anything small when it comes to family!

Our good friends are coming with their kids and I know Punky is super excited to get to play with both A and C at the same time. My sister has bought her a super cool paddling pool with a slide and water spouts so I know the 6 kids old enough to use it are gonna love it! I think some of the adults might even enjoy it too. It's meant to be 33 degrees but I have a sneaking suspicion it will end up hotter. Not unusual when you consider that it's been almost 40 degrees for Punky's last 2 birthdays.

Sunday is packing for Perth day and I've already started making a list of everything I need to take. I just can not pack without a list, I always forget something! Plus then the list comes in handy at the other end when it comes time to re-pack everything! I did an epic 4 hour shop yesterday and got myself a few bits and pieces for Perth, a couple of nice tops I can dress up or down, a plain black skirt and a really nice light-weight jacket from CityChic (which I am probably not gonna get a huge amount of wear out of, given that I am about to size out of CC and even the extra-small was pushing it to not be too big, but I just couldn't resist!).

I'm not sure how much blogging I'll get done next week. I'm only going to take the iPad rather than lug the laptop across the country. I'm going to try and get something written on the plane for Tuesday, but the rest of the week is a mystery! There will most likely be no Linky Lovin' Friday as I don't think I'm gonna have much time for surfing the web!

Which brings me to this week's Linky Lovin' goodness. I read so many fantastic opinion pieces this week, from some of my favourite bloggers. The world has provided so much fodder for the opinion piece and odd rant (I even got my Ranty Pants on yesterday) this week. I've loved it (when I haven't been feeling pissed off!).

Unless you've been living under a rock you'll have heard the uproar about Red Douche's new song and it's misogynistic lyrics. The old "but it's satire" argument has predictably been rolled out but I don't buy it for one minute, mostly because you have to have some kind of intelligence to create real satire. This is a great post about the douche, and it also has the best pun headline I've seen all week!  I pity the Foo by Handbag Mafia

Good Parent. Bad Parent by School of Mum. Angela at School of Mum is one of those women whose life mirrors mine in many ways, particularly out journeys of Motherhood (our eldest kids are only a week apart). I met her last year at the Digital Parents Conference and she is just the loveliest lady you are likely to meet. I read this post of her's last night and it really struck a chord with me, as I've been feeling the same way lately with everything I need to get done, but we both had these same moments on Wednesday and I could totally relate.

This week is PND Awareness Week and this post from serial LLF nominee Robyn was beautifully written and a great reminder that PND effects everyone in the family, not just Mum. Don't forget Dad! Written for PND Awareness Week by Mrs. D plus 3

And now my favourite post of the week, from one of my favourite bloggers (also a serial LLF recipient) and a woman I was lucky enough to meet in the flesh last last Friday, Hugzilla! The Hugzilla Award: The 2014 SanctiMummy of the Year is by far the most perfectly given award of the year, nobody deserves this award more than the douche canoe it's been awarded to and if you only read one of these links then make it this one. You won't be sorry.

So that's Linky Lovin' Friday for another week done and dusted. A little late today as I ran out of time last night to get it finished, between cleaning and shopping, but better late than never right?!

How's everyone else's week been? Anyone else starting to hit the wall and feel the overwhelm with all of the end-of-year shenanigans to get sorted?

Kylie Purtell said…
Ooooh awesome! I made the list - thank you! I LOVE Amy's post about RedFooL (like I love all her posts, who am I kidding). Looking forward to catching up on the others. Thanks again, and was awesome to finally meet IRL x
21 November 2014 at 11:26

Kylie Purtell said…
Can't wait for you to come to Perth. Hopefully, we can organise a little blog party welcome for you. Keep me posted and if you need anything while I'm here, I'm just a carrier pigeon away. ;)
21 November 2014 at 11:45

Kylie Purtell said…
Thanks so much! Can't believe how similar things are for us and that you had almost that exact same moment! Crazy town my friend! Perth is going to be all things amazing. Look forward to seeing what you get up to. Melbourne next time we hope :-)
21 November 2014 at 12:09

Kylie Purtell said…
I'm such a Hugzilla fan - her posts have the perfect amount of snark and funny whilst commenting very cleverly on big issues (KK's butt included). Have a great time in Perth - we're a nice bunch over here although I will apologise in advance for Tuesday's weather (pack a swimsuit and an umbrella).
21 November 2014 at 23:52

Kylie Purtell said…
Oooh thanks for the inclusion! I always check out your faves- good to see Zilla in here too- I'd read her shopping lists haha!
22 November 2014 at 12:59

Kylie Purtell said…
Oh my lordy, how did you even find the time to blog! I can't get through a slow, ordinary week without lists not to mention a full on, crazed one. Happy packing tomorrow x
22 November 2014 at 21:15

Kylie Purtell said…
I hope you're having a ball over there lovely. Great list and will head over to read Melissa's post now, I was a bit AWOL last week. I look forward to a FB and IG frenzy while you're away if less blogging. Also, a very very happy birthday for your precious last week, sorry I missed it. What a cow I am xx
24 November 2014 at 21:53