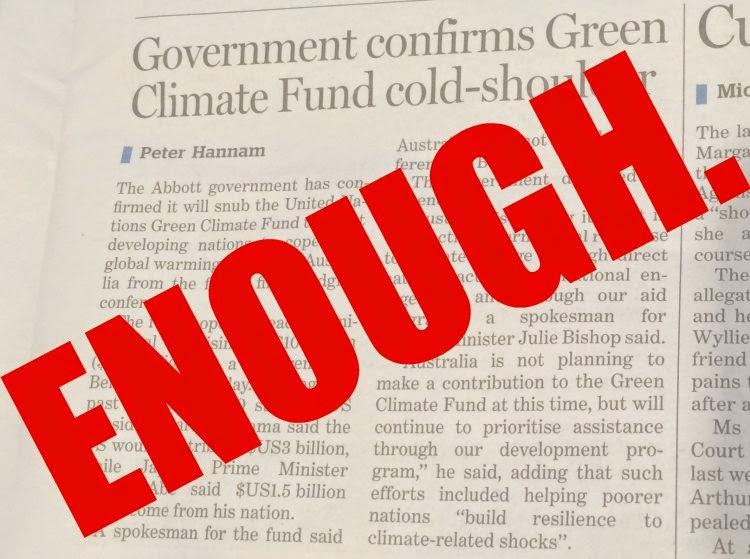 I have had it up to here with all of the Liberal bullshit and fucking around when it comes to climate change and doing something, anything, in regards to investment in renewable energy. I don't understand how frigging hard it is to get the fact that fossil fuels are finite. They will not last forever. Just because it may not happen in Abbott's lifetime, does not mean he can just bury his head in the sand and leave it up to future generations to figure out.

Why is it so hard to understand that we need to do something to slow down the destruction we humans are causing on this planet. To slow down our own demise. When it comes to climate change and environmental responsibility it's not about saving the planet.

It's about saving people.

The planet, this giant rock hurtling around the sun, will look after itself. It's done so for how many years already, who are we to be so arrogant as to think that it won't continue to figure itself out for the next however many years.

The problem, is that the only way the world can sort its shit out is to change.

The planet only cares about looking after itself and keeping itself going. The planet doesn't discriminate. It doesn't care whether we humans live or die. It will do what it has to, with the conditions it's given, to ensure it's continuance around the sun.

The way we are going, the planet is going to wipe us out in order to save itself, and as a reaction to the way we've been treating it for so many years. However just because the planet will always be here, in one state or another, does not mean we have to speed up the timetable for the extinction of human life on earth. Because that is what we are doing.

I suspect (and this problem won't be a popular suspicion but I'll say it anyway) that part of the problem with Tony Abbott and others of his ilk is not so much that they don't believe in climate change, but that they just don't care. Why? Because of their religious beliefs. They don't care about "saving the planet", climate change or greenhouse gas emissions, because they believe it simply does not matter. This world will end in the way it's written in the Bible, and there is nothing any of us can do to change that.

This will never be spoken about or admitted to though. It's taboo to speak about these kinds of things in our society these days. People in politics only care about the next election and keeping their jobs and their cushy pensions, and so they don't take a stand for anything, they hide their real personal beliefs, and they do the bare minimum that they need to do in order to be re-elected. And so their guiding personal belief system remains diluted and hidden from the public, despite the fact that contrary to what they say, it plays a huge role in their lives and the decisions they make every day.

I could be totally wrong, but that's my theory and I'm sticking to it.

The thing is though, if this is the underlying belief of people such as Abbott, whether it be conscious or unconscious, the 'Christian' thing to do would be to make sure that they could minimise the impact of climate change for other humans, and help reduce and minimise the human suffering caused as a result of climate change. To my mind it goes beyond just giving people cash to make up for what they lose as the seas rise and reclaim their homes, or giving them money for more hospital resources to deal with the effects of climate change and pollution.

Even if you don't think there should be anything done to cut-back on emissions from fossil fuels, surely people must realise that our reliance on them needs to be cut back. Investment, and large investment, not token, needs to be made in researching, developing and refining clean, renewable, energy sources. Renewable energy sources that can power our society at the levels it needs to continue functioning in the way that we've become accustomed to.

I may not be around when the time comes and we run out of fossil fuel, but I sure as hell don't want to condemn my descendants to having to deal with the consequences of the decisions that our 'leaders' make on behalf of us today.

Dealing with the issues arising as a result of climate change, and doing what we can to slow it, as well as looking at other ways to power our societies is not a matter of saving the planet.

It's a matter of saving the people.

And I for one have had enough of this bullshit fucking around by our government.

How do you feel about climate change? Do you think we need to be doing more in the area of clean, renewable energy? Have you seen any difference in your power bills since the government cut back the carbon tax?

Kylie Purtell said…
I think too many people still resemble the lady in the end of the cartoon ("yeah, yeah, climate change. But meanwhile, Kimmy's balancing a champagne glass!"). And when not enough people care, the politicians can basically do what they like. I do think Abbott was made to look bad at the G20 on this issue though, so maybe he'll be motivated by doing what the cool kids are doing if nothing else!
20 November 2014 at 12:10

Kylie Purtell said…
This stuff really depresses me. Our political system is not amenable to implementing long term, unpopular changes. And policies regarding consumption would have to change, which would see the masses screaming, despite the fact that change is necessary. Politics is all about surviving until the next election. Our system of government only thinks 3 or 4 years ahead. It fear that it will take a large-scale crisis to force change, and by then it may be too late. Rant away, it's a very valid one. Whatever people believe about climate change, they have to accept that the planet cannot sustain this level of consumption and population growth.
20 November 2014 at 13:22

Kylie Purtell said…
They're only lip-service Christians Kylie. their beliefs have more to do with the entitlement of the few than the teachings of Jesus (I'm atheist btw). If they had any morals at all there would be none of this scare-mongering about asylum-seekers and Muslims, and they would be doing everything possible to save their God's best work- our world. As it is, they seem to pander to the wealthy and the rest of us 'leaners' can work until we drop to make room for the next generation of drones. Makes me very sad for the future of my kids and any grandkids they may gift us with.
Also well done on the restraint- it makes me swear too!
20 November 2014 at 19:11

Kylie Purtell said…
This is a little embarrassing to say but I didn't pay much attention to Science at school and suddenly, I've found myself having to teach it to a junior class this term. The topic is renewable energy and I was upfront with the the kids and told them that I was learning too. Anyways, off on a tangent but running out of resources is scary shit. Governements don't do enough about anything long term - they don't see past the next polls. I've had enough too. Cheers for linking with The Lounge! X
20 November 2014 at 21:05

Kylie Purtell said…
I don't really have anything to add (which I know sounds like a cop out) but you've expressed it so well. Unless we stop paying lip service to this issue and start addressing it seriously then life as we know it will become unsustainable at some point. That may not be in my lifetime or my childrens but we owe it to future generations to make very real efforts to ensure it doesn't happen in theirs.
20 November 2014 at 23:03