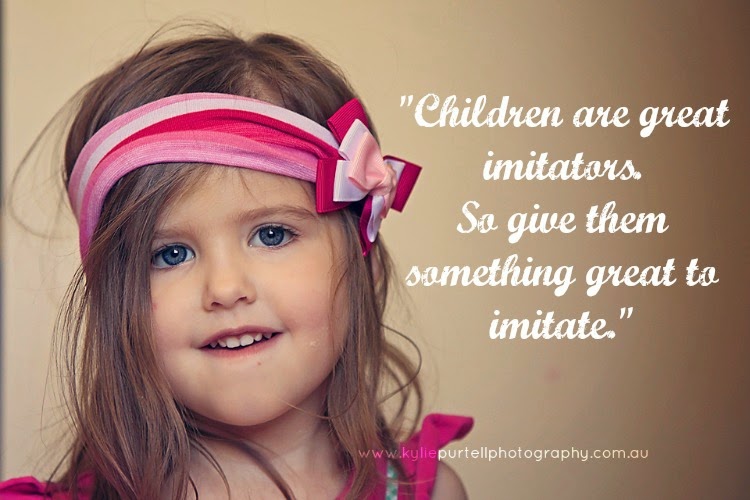 This week I'm finally going to join in with the gorgeous Josefa for her monthly Conversations linky. This month the theme is Conversations with colour, and Josefa has written about the choices we make as parents and AFL team supportership (is that even a word? I have no idea. But anyway...).

It's no secret that I'm a talker. If you've ever met me in the offline world then you know that I could talk underwater if need be. I've always been a talker. And it's not a nervous talking thing either, where people feel the need to talk to fill empty space in awkward or new situations. I am a grade-A, barely-pause-to-take-a-breath, Chatter Box.

I've been this way ever since I learnt to talk. I come from a long line of talkers, so it's not surprising. I've long since grown accustomed to the jokes and digs sent my way in regards to what I think is a very handy habit to have. I can have a chat with anyone, and if need be I can just keep talking until something more interesting comes along for the listener to do. Don't even get me started on how much I talk when I've been drinking!

So it makes sense that my daughters are inheriting this trait from their Mother. Zee, at only 15 months old already has quite an extensive vocabulary. Unlike Punky, who was quite slow to start talking, Zee has benefited from having a Chatter Box big sister and is already busting out the two syllable words and stringing up to 3 together at a time.

Of course the 3 words that she strings together just happen to be "let it go" but we won't dwell on that. She also loves to tell me to "Go! Go!" when we are stopped at traffic lights, thanks to Punky's incessant yelling of it every time the car slows down, and thanks to swimming lessons her favourite thing to say at the moment is "ready, go!".

People are quite shocked to learn that she is only 15 months old when they hear her talking. She is an incredible mimic and will copy most things, with perfect pitch and intonation. She never shuts up and wanders the house babbling and talking to herself non-stop. It's such a relief when she goes to bed. 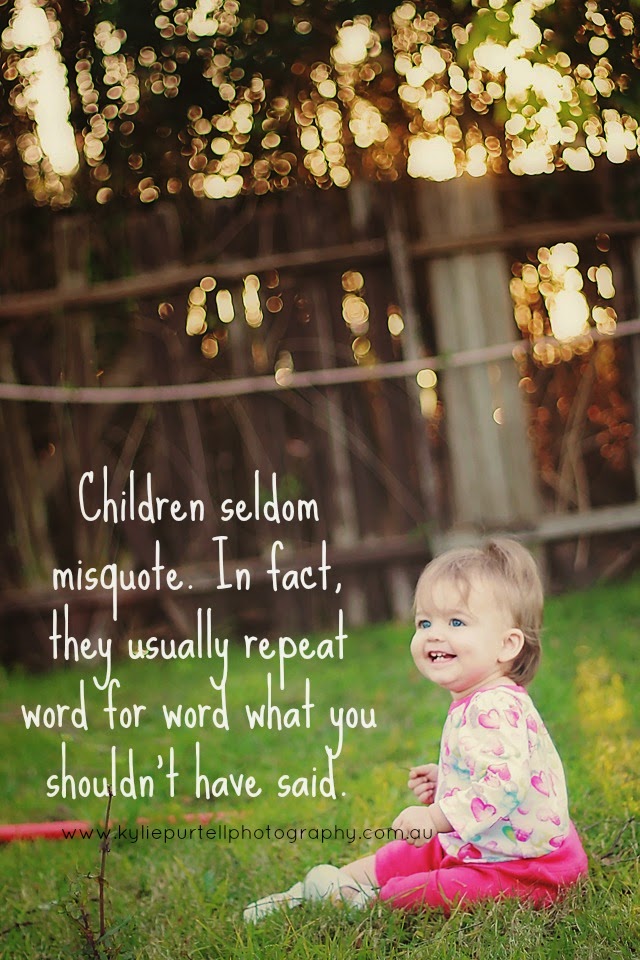 The real laughs come from Punky though. She is at that stage where she is like a little sponge, soaking up everything she hears, and then parroting it back to you. I've had to really start watching what I say after overhearing her call her Barbie a little bugger, as well as hearing her say "There's pucking one" after I'd muttered under my breath about there always being one person who doesn't move while driving! Bad Mummy!

The cutest is when she says things that you just don't expect to hear a toddler say, and you wonder where she got it from. Like exclaiming how delicious her play tea was the other day, or when she told my sister last night "It's so great to see you!" when they were saying goodbye.

My favourite is when she tells me how "bootiful" I look when I get dressed in pretty much anything, or when she tells me that she loves me so much, or "to the moon!". When I hear her say these things to me it forces me to try and see myself through her eyes and it's a very interesting lesson she has to teach me.

Perhaps the funniest though, and most awkward is the fact that she can't quite pronounce the 'f' sound yet. It's not a huge deal, because there aren't too many words that she is trying to say that begin with that sound. Except for two. And when she says them in public it makes people double-take and give me funny looks.

I've been trying to make an effort to record her talking because I really don't want to forget how cute and funny she sounds. Pretty soon she'll be speaking perfectly well and my memories of her funny talking ways will fade. The magic of the modern age means it's easier than ever to capture these precious moments, and I know in years to come we'll both get much enjoyment from re-living her funny little talking ways.

Do you have video of your kids talking as toddlers? Did your kids ever struggle to make certain sounds when learning to speak?

Kylie Purtell said…
Love this! And yep I totally remember us babbling on at The Digital Parents Conference at that dinner like we already knew each other! Love when two big mouths get together!

Tom is around Punky's age and he was a bit slow too. He never stops now and it will be interesting to see the effect that had on J. He makes me burst out laughing when he suddenly says stuff too. Like once he slapped his knee and said 'Mum, what are ya talkin about??' Haha kids hey.
30 October 2014 at 11:23

Kylie Purtell said…
Oh Kylie this is just beautiful! I think the most colourful conversations come from children. And perhaps the conversations we should treasure the most. Gosh your images speak volumes Kylie - the colour, the sharpness, the moment they capture - you are onto a good thing here lovely. Thank you for linking up to #convocoffee xx
30 October 2014 at 12:58

Kylie Purtell said…
My 2 and a half year old is having a hard time with language acquisition, and the only multiple word phrases he comes out with are "where is he?", which is a peek a boo game, and "kick the ball".
He actually never shuts up, but is a language all his own, punctuated with numbers and random words in english. We're looking into it at the moment, but it is a long road. I am looking forward to my 4 month old little girl speaking :)
Dani @ sand has no home
30 October 2014 at 13:59

Kylie Purtell said…
Yes, we have plenty of videos, I just love watching them and need to go through and edit them and put them on disc. My son was slow to talk due to hearing loss, he had grommets put in and adenoids removed and in the past few months he's really picked up on talking. I love hearing Mummy, Mummy and Daddy Daddy, I love hearing him use the names of his toys and calling our dog by his name..Our dogs name is Billy but it sounds more like YiYi. He's also started calling my parents by their names (oma and opa) although Opa is Apoo.
30 October 2014 at 15:01

Kylie Purtell said…
Unfortunately I don't have any of my older two but I do have some of my youngest one talking on film. He was so cute! I can imagine your house is non-stop chatter from morning till night which I know can be lovely but can also make you crave just a little bit of "shush" every now and then ;)
30 October 2014 at 16:51

Kylie Purtell said…
Some of our kids mis-pronunciations have become part of our family vernacular. Our guinea fowls will always be guinea flowers to me! :)
31 October 2014 at 08:18

Kylie Purtell said…
Bub's only just started talking some words so she hasnt said anything overly funny yet, but she does have a knack for saying heeeey or nah/no at the perfect moment. Shes currently learning the s sound but she adds a h to it so sometimes it sounds like shes saying shit, but its actually ssshhhhhht. She has big conversations with her toys though in random babbling, but you can tell when shes pissed off at them.
31 October 2014 at 08:25

Kylie Purtell said…
Haha...that's cute! It's scary though how much kids soak up what you say and repeat it. I've had some hilarious moments with clients where they will say things like 'Mum said not to tell you...' and the poor parent is embarrassed! :P I'd be awful around kids though...I swear a lot and if I were to ever have kids, there's no way I could have them in the car with me.
31 October 2014 at 08:31

Kylie Purtell said…
When Dyl was about 3.5 we were staying at my parents house. We were leaving the park and my brother was taking a little too long. From the back seat, clear as a bell, we hear 'Corey get in the fucking car'. I burst out laughing, I couldn't help it. His tone and context was too perfect lol!

Kylie Purtell said…
Such beautiful photographs! No kids but my niece had no front teeth for ages and it really impeded her speech development!
31 October 2014 at 22:32

Kylie Purtell said…
We luckily have lots of videos and now the tornadoes are both speaking, there is never a quiet moment in the house. "Let's go!" is Mr TT's (age 2) favourite saying. Miss TT (age 4.5) recently had her tonsils out/adenoids out/grommets surgery and it has made such a difference to her speech - her voice has gone up an octave and she is pronouncing her letters and sounds so much more clearly. She's still as bossy as ever :)
2 November 2014 at 02:29

Kylie Purtell said…
They sure grow so fast, wished we had thought to get lots of videos when they were little for them to look back on :)
Love how your daughter is replacing the F sound with P - that would be so cute to hear! And funny to explain.
Our baby is now 9 and he too will say things that I have no idea where he got the sayings from, I keep meaning to write them down but I forget to! Could make a book with all of the things my boys have said over the years :)
5 November 2014 at 13:57