And the next Tosser Trophy Goes to... // Laughs 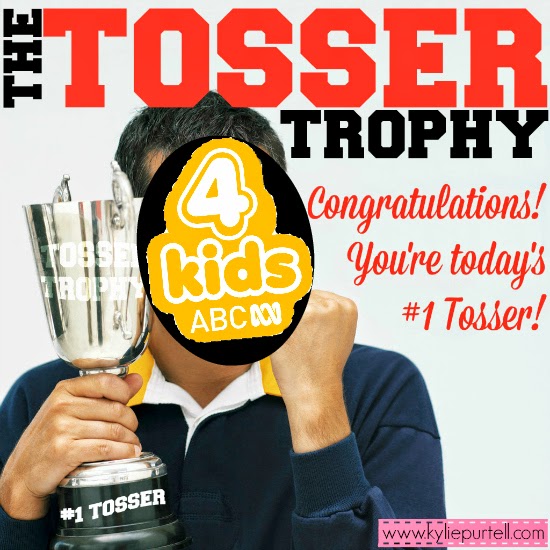 It may have escaped the notice of thousands, if not millions of Australians, but something terrible happened for a large portion of the Australian public yesterday. Something that carries huge ramifications, the shock-waves of which will be felt for generations to come...

Do you even know what you've done ABC?!?!

No longer will I have access to the half an hour of dinner prep/speed cleaning time that the familiar strains of the Play School theme song used to buy me.

No longer will I have the closing credits of Ben & Holly's Little Kingdom to signal to myself and the munchkins that yes, it is in fact dinner time.

No longer do I have the soothing lullabies of the Night Garden to entrance the smallest child in to staying still long enough for me to get her in to her pyjamas after a bath.

Perhaps the biggest travesty of this line-up though is this...

Only ONE episode of Daddy Pig Peppa Pig now airs in that crucial aresnic hour zone from 4:30 to 6pm.

How are Punky and I supposed to function on only one episode of Peppa Pig of an afternoon? And how am I to justify not putting on the bloody Peppa Pig DVD when there is now no 3-5 episodes "just about to come on, sweetie". I can handle losing my fix of Daddy Pig (I can stop any time I swear), but won't somebody think of the children?! 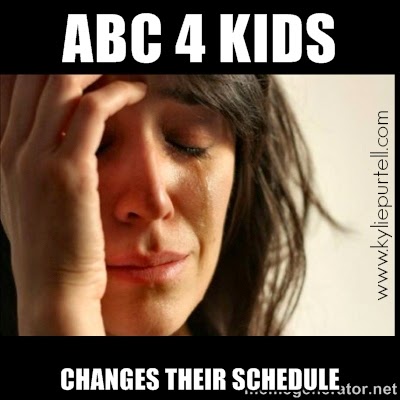 I don't know what the hell is going on at the ABC, but I can only assume that the fear of budget cuts has addled the brains of those in charge of programming.

The childless person who did this is a cruel and evil being (and again, I can only assume it's a childless person, as no parent in their right mind would do something like this to the parents children of Australia!).

It's supposed to be MY ABC dammit, and this is anything but! If it was MY ABC then there would have been much more warning than a quick ad at the end of Play School advising that it would be airing at a new, ridiculous time.

There would have been a massive letter-box drop to all parents of pre-school-age children informing them of these changes so that they could have started preparing themselves their children weeks in advance.

I shouldn't really be surprised though. It's not like the other TV stations haven't been doing this to us for years! Gone are the days when you could rely on your favourite show being on at the same time, same day every week.

These days you're lucky if it's on the same day/time from one week to the next! It's a joke! It shows contempt for viewers, and I for one have had enough! It's almost enough to have me writing a very strongly worded letter. 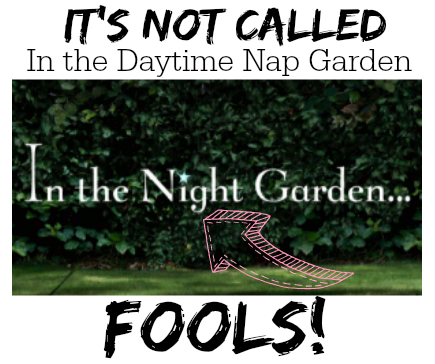 This is a travesty for the children of Australia and I believe the actions taken by ABC 4 Kids should be scrutinised closely. We just can't have the faceless men of Australia's pre-school-TV programming playing with the minds of our children like this.

I just want to know one thing ABC 4 Kids.

What dickhead decided to schedule In the Night Garden for 11:35 AM? It's the NIGHT Garden you tossers! What part of Night do you not understand?

Have you or somebody close to you been a victim of the TV schedulers whims? It's ok to talk about it here, this is a safe place where rage can be vented, no injustice is too small, and suggestions/ideas for getting around and coping with this madness shared.

Linking it up with Essentially Jess today for IBOT.

Kylie Purtell said…
Yea what the fuck is with the NIGHT garden being on in the middle of the day???? And that stupid bloody shrinking grandad show came on last night when bub usually watches giggle and hoot. What the hell. She thought it was bed time at 5:30 because thats when giggle and hoot goodnight bit was on..... argh SO annoyed.
8 July 2014 at 09:39

Kylie Purtell said…
Umm so don't hate me but I LOVE that new changes, shakes it up a little and also means that my kids can watch TV at 5.30am - SORRY! Oh and you probably didn't have kids but 5 years ago they used to have In The Night Garden on in the middle of the day, I used to feed my daughter in front of it and then put her to bed after the goodnight part......... SORRY - tell me you still love me?
8 July 2014 at 11:40

Kylie Purtell said…
Ha ha, but truly how could anyone move the Night Garden to the middle of the day that is just crazy. We are beyond Little Yang paying any attention at all to Giggle & Hoot bedtime song as a sign he should head to bed but I do empathise.
8 July 2014 at 11:43

Kylie Purtell said…
Oh Kylie, I'm so sorry - I must confess that I am actually cheering about the programming changes as it means that Peter Rabbit is back on which is a big deal for our Mercedes!
I do however agree that the timing is utterly insane - Peter is on at 6.33pm which in our house is medicine, story and getting into bed time. Hardly convenient. I liked it better when he was on at 3.20, altho 6.33 is better than not on at all which has been the case for weeks.
8 July 2014 at 14:53

Kylie Purtell said…
We're still getting used to the changes also. I don't mind but I preferred play school at 4.30, purely for my own reasons as I don't feel guilty the girls watching it while I get their dinner ready!!!
8 July 2014 at 15:55

Kylie Purtell said…
The Night Garden! My little guy loved to watch it before he went to bed, so I'm mad with them too. Justine Clark dvds are not quite so restful.
8 July 2014 at 18:22

Kylie Purtell said…
I'm glad actually - the only thing we used to watch was Play School and now, at 3.30, it's in Mitchell's nap time so I'm much happier with Ashleigh watching it! Sorry! Still looking for a Daddy Pig plush for you. x
8 July 2014 at 19:19

Kylie Purtell said…
My sentiments exactly!! What is the point of having In the Night Garden on during the day? It is for night time people, night time. It is to prepare our children for the garden in the night. Jesus wept. What are they thinking? I need that show to wind the kids down. As for Playschool being moved I will now never be able to cook dinner in peace. It's a sad time for television. It will take some time to adjust ;) xx #teamIBOT
8 July 2014 at 19:49

Kylie Purtell said…
bahahaha WHAT were they thinking! Someone did it to mess with our heads I say!
8 July 2014 at 20:57

Kylie Purtell said…
When In the Night Garden started this morning Mr 4 was horrified. He promptly turned it over after shaking his head and saying Iggle Piggle doesn't go on during the day. I knew that they were changing the Playschool times but I didn't realise that they were completely fucking up the whole line up!
8 July 2014 at 22:38

Kylie Purtell said…
My kids are older now but but I hate that they change routines. I lived for the routines of our life when the kids were smaller. That 30 minutes while you throw together dinner was crucial TV viewing time. Why mess with the sanity of parents. We didn't do TV after dinner so didn't really watch In the Night Garden - but it is a nice time for kids to wind down and get ready for bed.
8 July 2014 at 23:33

Kylie Purtell said…
My 5yo looked confused when In The Night Garden came on just before lunch. I know, I comforted him, it's not night time is it? And he answered with, um yeah I spose not, but I think it's sad that there will be no more kids shows for today cos that silly grown ups show is on next and I don't like the spekky show (spicks & specks) and OH MY GOD DO I HAVE TO GO TO BED?!?!?
Why traumatise little kids ABC, why?
9 July 2014 at 00:24

Kylie Purtell said…
They moved "In The Night Garden" to the middle of the day!?!? They whaaa!!?!?!? Are they on crack!? My son has moved "up" to ABC3 now, full of WEIRD grown-up cartoons, and ABC2 4 kids is actually ABC24Babies according to Mr 6! But I do remember them doing this to me oh about 4 years ago now, and the Wiggles didn't come on when they were supposed to. There were tears, outrage, tantrums...and Nick was upset too! ;-)
9 July 2014 at 09:11

Kylie Purtell said…
I remember that Emily! Bridie used to watch it and it would let me get washing and stuff done!
9 July 2014 at 20:29

Kylie Purtell said…
Apparently they moved ITNG to help with day time naps?
A lot of the changes have gone back to the way things used to be, I think.
I'm not too bothered by them, but it did catch me by surprise Ben and Holly being on earlier. I thought I was late getting dinner organised!
9 July 2014 at 20:30

Kylie Purtell said…
Play School in the morning just feels all kinds of wrong. And I agree, I'm NOT HAPPY. I'm sure Play School has always been in that timeslot? I seem to remember coming home from school when I was a kid and watching it. Wrong wrong wrong.
11 July 2014 at 12:09

Kylie Purtell said…
I just can't get used to ITNG being aired in the day. As for Play School, did we gain a 3rd episode each day? We stumbled across it yesterday as we've all been sick and just watching telly. It's funny how so many of us schedule around TV shows! Great post!
11 July 2014 at 16:11

Kylie Purtell said…
Classic rant Kylie. I love it. But you're right. How dare they change things up in a way that will disrupt so many families, especially when they want it to be the channel that families default to. Silly!
12 July 2014 at 16:02

Kylie Purtell said…
I had the reasoning that someone high up in the ABC has a child that naps about that time of the day and signed off that is the time 'In the night garden' WILL be on. Crazy fools indeed. One Peppa Pig!? Who is running this circus?!!!! That's what I want to know!
13 July 2014 at 11:03

Kylie Purtell said…
OH wow I so feel for you - we no longer have TV in our motorhome but when my boys were little ABC was my lifeline, especially Playschool. Can't believe they have changed the program times...what are they thinking?
13 July 2014 at 20:22

Kylie Purtell said…
My 14 month old only just discovered In the Night Garden & I can say it is dead set the only time he stays still for more than 30 seconds. Luckily I have Foxtel so I've recorded & series linked that shit up so come 6 or 6.30pm I can turn it on & feed the ladybaby without him trying to shove his hand between my boob & her mouth.

Kylie Purtell said…
Grandpa in my pocket can disappear STAT - WTF? I have a 14 month old, I can't do the evening without night garden, I do not have the hypnotising powers of iggle piggle. I can't so this, it is however exciting that hubby now walks through the door just in time for Shawn the Sheep - he quite enjoys that. But seriously, I'm with you.
21 July 2014 at 20:39