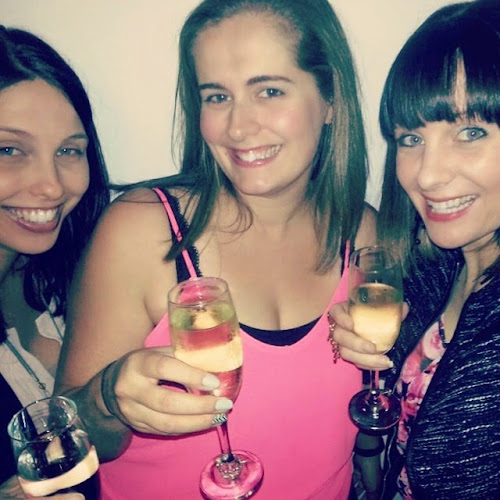 Saturday just gone was my birthday. I don't usually go huge for my birthday, preferring to just have dinner with my family and maybe dinner with my girlfriends. But after the stress of the last month I really needed a night to just blow off some steam and that's what I did.
To be perfectly honest, it wasn't so much Mums Gone Wild as it was Mums get out of the house and eat good food and drink lots of cocktails! I went to dinner with two of my besties, Kel and H, and afterwards Kel and I headed off to Panthers for cocktails while the pregnant H headed home.
I gotta say, it was quite strange not being the pregnant one and dropping people off. I remarked at dinner how H and I had swapped places, as I was the heavily pregnant one when we went out for dinner for my birthday last year! How the times have changed! 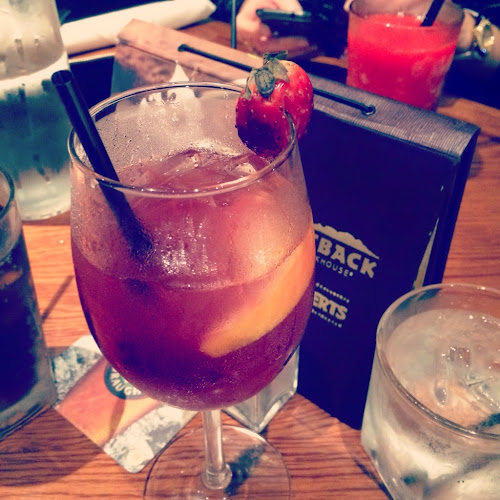 Dinner was great, but it was the drinks that I enjoyed most. Panthers has refurbished good old Dominic's Cocktail Bar and it's now Dom's, a 1920s-Gatsby-inspired exclusive cocktail area. They want you to make a reservation now, but thankfully they weren't full so we were able to go right in. It's table service, so you don't have to go and line up at a bar, but unfortunately it took quite a long time to get our drinks. 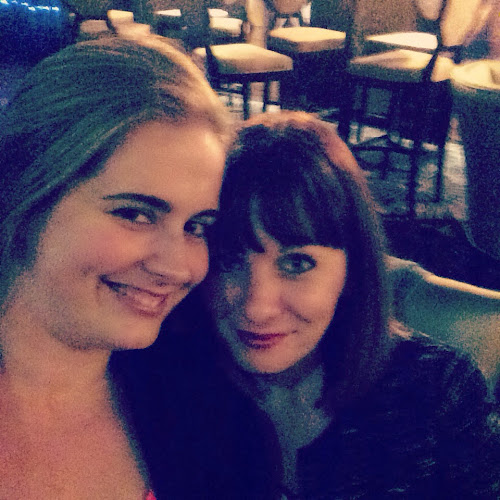 The cocktails were pretty awesome though. I had one that was like a lemon gelato slurpie, and the other was called The Cat's Pyjamas. I have no idea what was in it, other than pineapple, but it was gooood! I also had a Strawberry Sangria while eating dinner at Outback Steakhouse, and after we left Dom's I had to indulge in a classic margarita.
After that it was all about the Malibu & Pineapples, which were going down a treat! So well in fact, that I was drinking two to every one of Kel's and before I knew it, it was 2am! So we grabbed a cab and headed home to Kel's place, where we proceeded to drink a bottle of Moscato and finish the night off with some of my favourite ice cream. 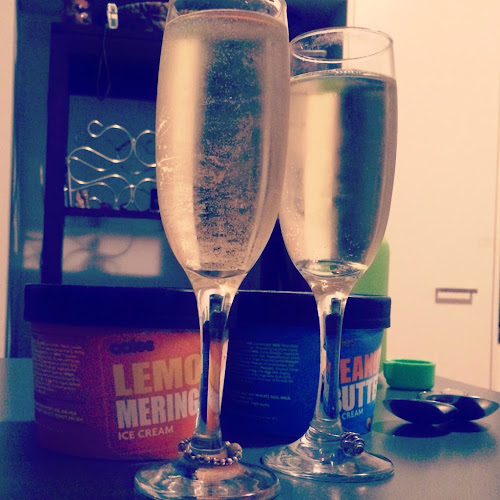 I had a great night, and despite the alcohol I felt great the next day (if a little tired!). It was nice to wake up to a birthday message on my phone rather than a naked toddler asking me where her iPad is! Kel was the hostess with the mostess and made me pancakes and coffee to welcome the morning.
Dave picked me up and my wish came true, to come home to a tidy house! After a sushi lunch we packed the girls up and headed over to the hospital to see Mum and the family and have some dinner. We took over the patient lounge and ordered Pizza to the hospital and proceeded to have our own little pizza party. 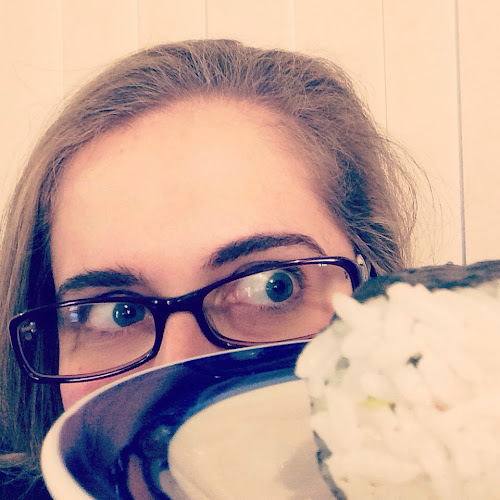 While it's not how one expects to celebrate their birthday, it certainly wasn't the worst way I've spent one! The only thing that mattered to me was getting to see Mum and spend some time with her and my family. We ate too much, had mud cake and even a little dance. It was kinda great. 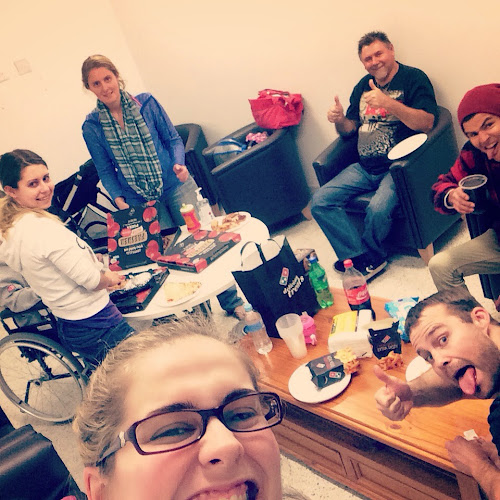 After getting home Dave and I sat on the lounge for a few hours, having a couple of drinks and just talking and hanging out together. It really was one of the best birthdays I've had. I'm so lucky, and so thankful, to have such a wonderful family and beautiful friends.
Thank you to all of you too, for the lovely birthday wishes via my Facebook page and Instagram profile. It was lovely to see them and to feel your hugs, kisses and well-wishes through the screen. If the rest of the days in my 33rd year are half as good as the first one, I'm in for a good year! 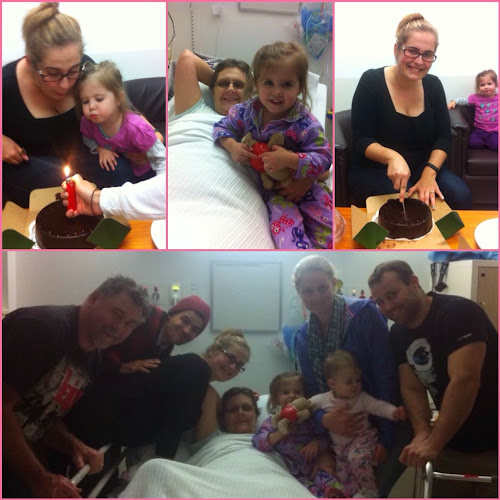 How do you like to celebrate your birthday? What's your favourite cocktail?

Kylie Purtell said…
I'm so glad you were able to head about and enjoy yourself. Kylez. Laughter is good for the soul, and it looks like there was plenty of opportunities for it. I hope you're feeling refreshed and reenergised now too.
My birthday is just after Christmas... and truthfully? I'd like nothing more than to head away from the commotion with just my little family... but it never happens. Never. I know the attention comes from a good place, but gee, I'd much prefer to go without. X
24 June 2014 at 08:04

Kylie Purtell said…
I, on the other hand, did not feel so great the next day. The hangover got worse as the day went on. So glad you had such a good birthday though, you're worth the seediness! xx
24 June 2014 at 10:27

Kylie Purtell said…
What a lovely birthday weekend! I'm glad you got out for a few cocktails, it sounds like you deserved it. My favourite's a dirty martini, and actually it's my birthday this weekend, so it might be time I headed out for a cocktail or two myself!
24 June 2014 at 12:37

Kylie Purtell said…
That family shot of everyone at your mums bedside is making me tear up, you've all been through so much, what an amazing family you all are, so special the bond you have! I'm glad your birthday rocked :) xx
24 June 2014 at 19:50

Kylie Purtell said…
That birthday sounds absolutely perfect! I'm so glad you had a great time and a chance to forget about your worries. I don't know how you woke up feeling okay the next day. I would be on my death bed after all of those drinks :) My fave is definitely a margarita, but that lemon slurpie one sounds pretty fine too. Dropping in via #teamIBOT.
24 June 2014 at 20:33

Kylie Purtell said…
So glad you had a lovely birthday, even if it was a little unconventional celebrating in the hospital. :)
24 June 2014 at 21:35

Kylie Purtell said…
Sounds like a great birthday to me. No hangover?? Lucky you! I am usually not so lucky these days.
Leanne @ Deep Fried Fruit
25 June 2014 at 06:42

Kylie Purtell said…
My 19th birthday was spent at my Grandmother's funeral so it was definitely a step-up from that!
25 June 2014 at 11:09

Kylie Purtell said…
It was so good Renee, I was so annoyed when they came back to tell me they didn't have anymore lemon sorbet to make the second one I'd ordered! I think I got very lucky with the no-hangover, definitely dodged a bullet!
25 June 2014 at 11:10

Kylie Purtell said…
I was determined to make sure that we still celebrated my birthday no matter where Mum was. Not so much for myself, but for Mum, after all a child's birthday is just as special to the Mum, and I didn't want her to feel like she had made things bad for us xx
25 June 2014 at 11:11

Kylie Purtell said…
I think you should definitely have a few cocktails. If you can't indulge on your birthday, when can you?! Happy Birthday for the weekend xx
25 June 2014 at 11:12

Kylie Purtell said…
Lol, that is no good, but I am glad I am worth the seediness! I will return the favour in a few months time (and pray that I come up feeling as good, although as they, lightning never strikes twice!).
25 June 2014 at 11:13

Kylie Purtell said…
Happy Birthday! Sounds like it was a great time - waking up to pancakes & coffee and then going home to a tidy house? Priceless! May the rest of the year follow suit!
25 June 2014 at 11:41

Kylie Purtell said…
Sounds like you had an awesome night! I went away for the weekend for my birthday this year and it was great. My favourite cocktail is Fruit Tingle. Last time Paul and I went out child free the place we went to had $7 cocktails..it was dangerous I tell you lol!
25 June 2014 at 23:24