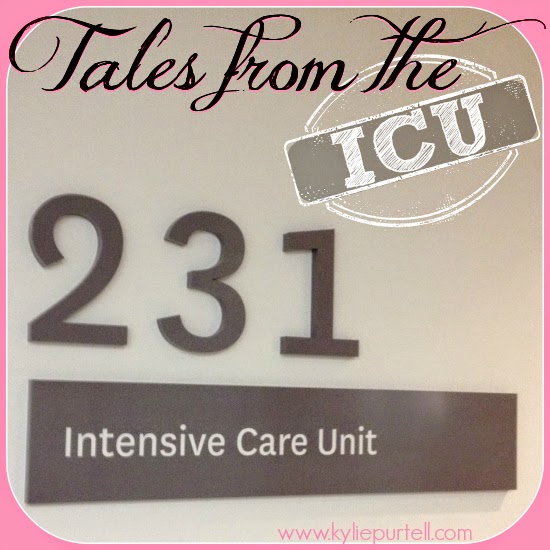 Last Wednesday my Mum had a pretty serious accident at work. I'm not gonna lie. I've had better weeks. It's been a roller-coaster ride, from one extreme to the next, and it probably won't stop anytime soon. But as they say, if you don't laugh you'll cry, so I am choosing to laugh (and run when I can), and it's true. Laughter really is the best medicine.

Last Wednesday around lunchtime, I got the call to say that Mum had been in an accident at work. There wasn't a lot of details at that stage, except to say that she had head injuries, my Step-Dad was there, and they were going to take her to Liverpool Hospital.

I waited for what felt like forever to finally get some news. Both feet smashed. Fractured spine in three places. Severe head cuts (but thankfully no long-term brain trauma) and a veritable world-map of other cuts, scrapes and bruises.

When I arrived at the emergency department it was a bit of a shock. I walked in to find Mum strapped to a gurney, lying there with a blood-soaked bandage wrapped around her head and a huge neck brace. I walked over and said hi, she was conscious and had apparently been talking and making jokes. I took a photo. Which, if you knew my Mum, is exactly what she would have wanted me to do. Heaven forbid this one thing in our lives go undocumented just because she couldn't be the one holding the camera!

The nurses were setting her up with a button to push to get morphine when she needed it. After they explained to her how it worked she asked me how the girls were. I told her they were fine. I asked her how her pain was and told her to make sure she pushed the morphine button when she needed to.


My good friend B, who also works with Mum, was there and made a remark about this being the reason why you should always wear good undies when you leave the house. She turned to Mum and said "You were wearing your good undies right?"

B told her that instead of bringing flowers she was going to buy her good undies instead, so the next time she felt like taking a nap under a pile of falling, 50kg pallets, she'd have good undies on.

Mum told her she'd need to go to the tent department for them.

After Mum had been moved to the ICU on the first night, my sister E, my brother and I, were very sneakily allowed in together to see her (usually only 2 visitors at a time in ICU). We were standing talking to her and she asked about N's work and if they were ok with him leaving. N said that the other apprentice, who had previously been a bit mean to him, had actually come up and gave him a hug and told him that he hoped he was doing ok.

Mum misheard what was being said and thought N had mentioned something about a boyfriend and after the confusion was cleared up she said "Oh good. I thought it was an odd time for you to be coming out to me now!".

On Friday after her first surgery, to anchor her spine and repair one of the smashed vertebra, my sister A and I were the first ones to be allowed in to see her when she was brought back from recovery. We gave her a kiss, and I told her that A was finally here (she and her husband had been in the States when the accident happened and had gotten the first flight back available and had only landed in the country 6 hours earlier).

A asked her how she was feeling after the surgery and Mum looked at her and said "Can you get these bloody boots off my feet?!". She was wearing plaster casts!

On Sunday night, after Mum had been moved to a ward and in to her own room, we were all finally reunited again: Mum, Dad, our step-Dad, sisters, husbands, brother and my girls. I can't tell you how good it felt to be in that room at that moment, all of us together.

My Step-Dad read out one of the cards to Mum, and it made mention of her being a "Princess in the kingdom of The Lord". She let out a snort and said "I'm more like Shrek", meaning Princess Fiona. I think it was the first really good laugh we'd all had in days.

Without a doubt, one of the things I love about my family so much is our ability to laugh and find the humour in any situation. Sure, it might sometimes be blacker than black sometimes, but without laughter it would all just be too much to deal with. Laughter can be a salve for the soul, especially in times of high emotion, and I'm so glad that despite her pain, my Mum was still able to hold on to her sense of humour.

Sure, some of it may have been directly related to the morphine and/or anaesthetic, but who cares. She was laughing and that's what matters. She has a long road ahead of her in terms of recovery. It's gonna take a lot of work on her behalf, and massive amounts of support from the rest of us, but we will get her there in the end.

And the best medicine we can give her at the moment is our laughter and smiles. And our love.

I love you Mum. You've certainly taken extreme measures to get out of cooking us Family Dinner for a while, but you can't get away from us that easily. If anyone can take on 50kg pallets and win, it's you. Can't wait to turn those buggers in to firewood for you!

Do you agree that laughter really is the best medicine?

Kylie Purtell said…
Wow! Amazing she can laugh about it (but those legs are Simpson like). Here's to a speedy recovery!
3 June 2014 at 07:30

Kylie Purtell said…
It's wonderful to hear your Mum is in good spirits Kylie. If you don't laugh, you will only cry! I hope her recovery continues to go well xx
3 June 2014 at 07:39

Kylie Purtell said…
What a week you've had and you have certainly been in my thoughts. Have to agree laughter really is the best medicine. Please let me know if there is anything I can do, online or otherwise, to help.
3 June 2014 at 07:43

Kylie Purtell said…
Sending get well thoughts to your mum, although it sounds like she has a pretty good spirit and attitude, she may not need much help!
3 June 2014 at 08:45

Kylie Purtell said…
Glad to hear that she kept her humour through it all. I hope that the recovery is speedy for her. Sending love to you all xx
3 June 2014 at 15:48

Kylie Purtell said…
Pleased to hear your Mum is positive, laughing and feeling OK after a fairly serious sounding accident. Laughter is definitely the best medicine, and the best way to get through life. Thanks for the reminder xx
3 June 2014 at 16:03

Kylie Purtell said…
Kylie what a horrible call to receive and your poor mum! How did I miss this?! Sending prayers to your mum and your family. I love that you can all laugh together despite the circumstances. Sounds like you have a fab family. x
3 June 2014 at 17:00

Kylie Purtell said…
Lovely lady, I had somehow missed this too. Sounds like you guys win in the attitude department and your mum sounds acerer than a very ace thing. Huge hugs to all and get her a knitting needle. Those legs are gonna itch!!!! x
3 June 2014 at 17:53

Kylie Purtell said…
Yes laughter is definitely the best medicine! What a shock that would have been for all involved. Glad things are going to be ok. X
3 June 2014 at 19:29

Kylie Purtell said…
Your mum sounds like my kind of lady! I try to make jokes in the face of adversity, too. I'm so glad to hear her spirits are up and that she's doing ok. I know it will be a long road to recovery, but she is surrounded by support and LOVE from those most important to her. That will help her more than anything else. xo Aroha
3 June 2014 at 20:05

Kylie Purtell said…
I can imagine how horrified you must have been to receive that call. Thank God your mum is going to be okay and that she has such an amazing sense of humour and amazingly supportive family by her side to help get her through this.
3 June 2014 at 21:01

Kylie Purtell said…
Oh your mum is awesome. I think I need to add her to my must hug list!
So glad she is on the road to recovery and in good spirits. Still praying for her though. xx
3 June 2014 at 21:08

Kylie Purtell said…
So sorry to hear this. Glad to hear she is on the mend, and has so much support in this time. P.s congrats on your 5 years of blogging. Must be a record?
3 June 2014 at 21:12

Kylie Purtell said…
She sounds like an amazing woman lovely, with such a strong heart and very supportive and loving family around here. Hugs to you, here and laughter is great medicine but we are also all allowed a pity party from time to time, so make sure you remind her of that!! xx
4 June 2014 at 10:18

Kylie Purtell said…
I'm so pleased to hear that your mum is in good spirits Kylie, it will serve her well on her journey to recovery. Sounds like you and your siblings are holding up well too, big love and hugs from me xx
4 June 2014 at 20:36

Kylie Purtell said…
She's a good egg, your Mum. I'm so thrilled to hear that despite such horrid circumstances, you are all able to see the other side. What a beautiful family spirit you have. Sending love and health. X
5 June 2014 at 11:23

Kylie Purtell said…
Keep Laughing Kyile I just love you could all crack so many jokes because I understand the shock it would have been for you. So happy your Mum is doing well considering.
5 June 2014 at 23:34

Kylie Purtell said…
How did I miss this news???? So sorry to hear about your mum, Kylie. What a horrible thing to happen to all of you! I love how you are able to use laughter to lift your spirits, though. That's a powerful talent you have right there. (and I'm off to the tent department for some nice undies!) Kx
7 June 2014 at 09:14

Kylie Purtell said…
Wow Kylie you're mum sounds like such a trooper! Such good spirits considering everything she has gone through. I agree that it's good if you can have humour in such a situation, and it will definitely help her and you all in the recovery process.
7 June 2014 at 12:42

Kylie Purtell said…
It sounds like it would take more than 50kg of pallets to hold your Mum down. I'm sure your Mum and your family will come out of this ordeal laughing. I wish you all the very best of luck with the journey ahead.
7 June 2014 at 14:50

Kylie Purtell said…
Oh hun I so get it as humour totally got us by recently too. A lot of people couldnt understand how we could be in ICU and laughing but you do whatever you need to do right? I am so sorry for what your mum is going through. I hope she is back on her feet (both poor feet) very soon xx
8 June 2014 at 21:06

Kylie Purtell said…
Oh Kylie :( Your mum sure sounds amazing and I hope her recovery is fast and hilarious xxxxx
9 June 2014 at 12:33

Kylie Purtell said…
Your poor mum! What an ordeal but what a great sense of humor. It is amazing how having a few laughs can make you cope with difficult situations. I hope she's back on her feet soon.
4 July 2014 at 20:01