And the Inaugural Tosser Trophy goes to... 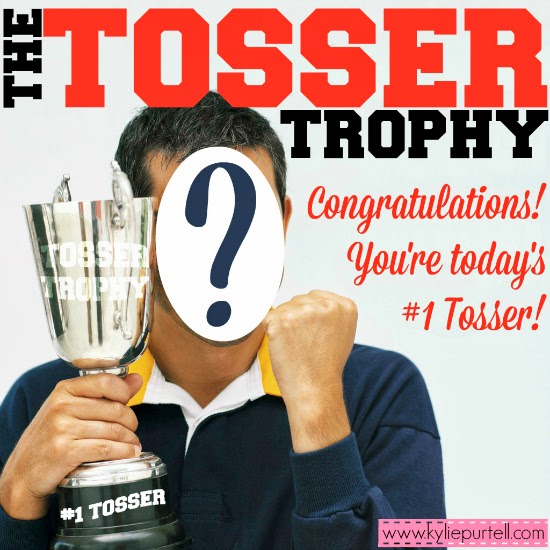 Back when the awesome Good Golly Miss Holly was still blogging (*sob* I miss her so much!) she would do a post every now and then and hand out what she called an  Asshat Award. I've decided that it's time to pick up where she left off as the internet is totally lacking in crazy people ranting about douche canoes and dickheads right? *insert sarcasm font here*.

So from now on whenever the notion takes me, and there is a dickhead in need of acknowledging, I will be presenting, for your reading pleasure, The Tosser Trophy. That's right, a trophy specially designed by yours truly to acknolwedge the hard work of certain individuals, groups or companies, who have excelled in their studies and finally obtained their Dickhead Degree. 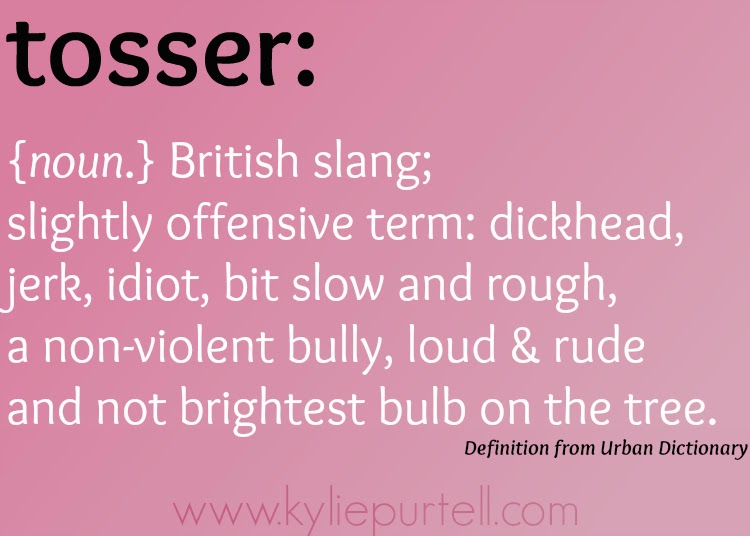 I would love to hear your suggestions in comments on the blog, via emails, or on the various social media platforms via the hashtag #tossertrophy. Can you believe no-one has ever used that hashtag before?! I intend to change that!

And now, without further ado, the moment I know you've all been waiting for, the announcement of the inagural Tosser Trophy recipient... 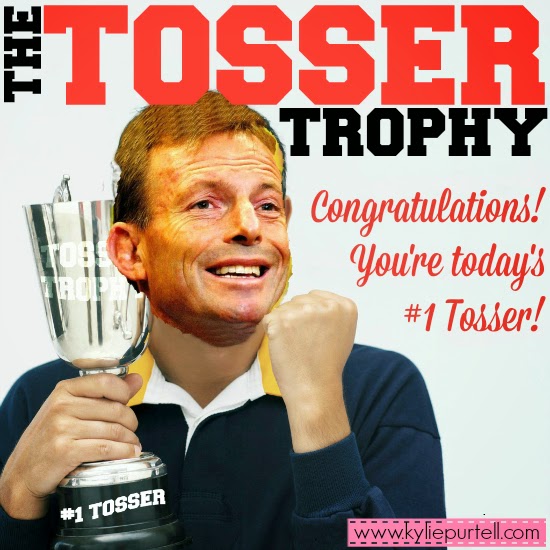 Or should that be Sir Tony Abbott?

Many of you will be thinking that there are plenty of reasons why Mr. Abbott should have been bestowed this accolade months ago. But today I want to focus on one reason and one reason only.

Of all the shit we got going down in this country right now, you thought bringing back knights & dames was of essential importance?

So important in fact that you didn't even bother to run it by anyone, you just picked up the phone and were all "Yo Queenie, I like what ya been doing over there in old-London-Town and I wanna get in on the act".

Don't get me wrong, I like a good Knight as well as the next person, especially if said knight hangs out at a round table and can go on quests for the Holy Grail and shizz. Or hangs out with the last remaining member of a dead dynasty who also just happens to be the Mother of Dragons. That makes for some entertaining story-telling.

But this isn't the Middle Ages or some epic fantasy novel, and Tony Abbot is certainly no mother-flippin' King Arthur!

So why don't we cut this crap and get back to the job at hand.

You know, the job you were elected to do Sir Anthony.

This place ain't gonna run itself!

To be fair though, the whole bringing knighthoods back does carry a fair amount of comic weight, and ministers from all sides of the political divide have been falling over themselves to get the biggest piece of the laughing pie.

Take this gem from Independent senator Nick Xenophon, that instead of Knights and Dames it should be "Bonza Blokes" and "Grouse Sheilas". Or this from shadow Treasurer Chris Brown: "Is he going to announce his car plan today is Toranas and Cortinas?'

But the man who really takes the prize for best use of humour and satire  by a politician is Senator Sam Dastyari. His speech is well worth a read (or watch, you can find it on YouTube here) and I will leave you with his final words, as they sum up the idiocy brilliantly (my apologies if you're not a GoT fan. And if you don't know what GoT stands for then I feel truly sorry for you and you should skip down to the next paragraph)...


"Ladies and gentleman, we need a leader who will reject climate change. Who knows the world is not warming - a leader who knows that winter is coming.

Friends, welcome to the Game of Tones."


No matter what side of politics you sit on I'm sure you can agree that there are much more important and pressing matters for our nation's leader to be concerning himself with than giving a few people the chance to make their names even longer.

And that, my friends, is why Sir Tony Abbott has been honoured with the very first Tosser Trophy.

Tell me, would you wanna be a Dame or a Knight in this modern day? And do let me know if you have any suggestions for the next worthy recipient of the Tosser Trophy.

P.S What do you think of the new blog design (I made it myself). Anything you don't like, think I should change, wanna see more of? I'm still tweaking but I'm pretty happy with it overall. If you're thinking of doing some new design for your blog email me, I'm looking for some people to practice on for free. Warning: I only know Blogger, not Wordpress.

Linking this up with Jess for IBOT, someone I'm sure I'll never have to award a Tosser Trophy to!

Kylie Purtell said…
I'm already a Queen so I won't be taking a demotion thank you very much. Seriously though, how embarrassing is it to be an Australian right now. Just when we'd really started to come into our own and independent country thanks to be able to survive the old GFC, Tones dons his suit of armour, rides in on his high horse and blows it all the smithereens.
1 April 2014 at 01:10

Kylie Purtell said…
There is no-one more worthy of this trophy. Tones is the quintessential tosser. What a dick.
1 April 2014 at 07:41

Kylie Purtell said…
I only had to read there was a tosser award and I knew who'd get it. Every single day he comes out with some new dick move. It's overwhelming...
1 April 2014 at 08:50

Kylie Purtell said…
You are perfectly suited to take over from Miss Holly, and I think she would be quite proud.
The knight hood thing? Well I don't hate the idea. Definitely not the most pressing issue at all, but it doesn't bother me too much honestly.
Loving the new blog look. It looks really professional.
1 April 2014 at 15:06

Kylie Purtell said…
WOOHOO - yay for bringing this idea back. Love it, love the rant, I can almost hear those fingers bashing the keyboard as you write this! There are so many more important things to do for this country than bring back this archaic notion! I'll keep my mind open for future Tosser nominees!
1 April 2014 at 15:31

Kylie Purtell said…
Ahhh I remember Good Golly Miss Holly and her Asshat Award - so glad to see the Tosser Trophy in its wake - as for our PM - he might be receiving this award more than once - is there rules against that? Josefa #teamIBOT
1 April 2014 at 15:52

Kylie Purtell said…
Excellent choice for the first one Kylie, and I'm betting it won't be his last either! How embarrassing for us to admit that he's running the country!!
Loving the new look, it's nice and fresh. You clever old chook x
1 April 2014 at 15:54

Kylie Purtell said…
This is great. I miss the Asshat Award too! I agree what is with the knighthoods? Aren't there more important things???
1 April 2014 at 17:56

Kylie Purtell said…
Maybe you should give an Asshat Award to every simpering Republican who accepts their knighthood too.
1 April 2014 at 18:27

Kylie Purtell said…
For one.. I think the Malaysian Govt deserves one of these trophies for the way they are handling the MH370 situation now! Gah.