(Not so) Worldess Wednesday - Three Months

Three months. 14 weeks as of yesterday. I can't believe my baby girl is growing so fast. You'd think I would have been prepared for it, seeing as this is not my first rodeo anymore, but I'm not. I don't think anything can prepare you. All you can do is try to savour every day, the good, the bad, the ups, the downs, the poos and spews. All of it. 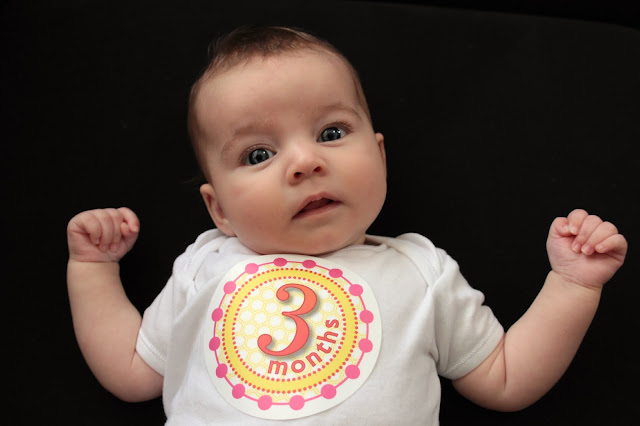 This last month Zee has really come alive. She was always a pretty alert little thing, when she wasn't sleeping that is. But now? She's a first class sticky beak! She just has to see what's going on around her. If someone new comes in to her line of sight she follows them intently, watching and studying every movement. When we were at Emergency last Wednesday night (kind of funny story, I'll tell you next week but it involves kebab sticks!) she was supposed to be going to sleep, and she did, for a little bit. But when I finally got called in and handed her off to my sister and step-dad she woke right up and got down to the important business of checking everybody out. 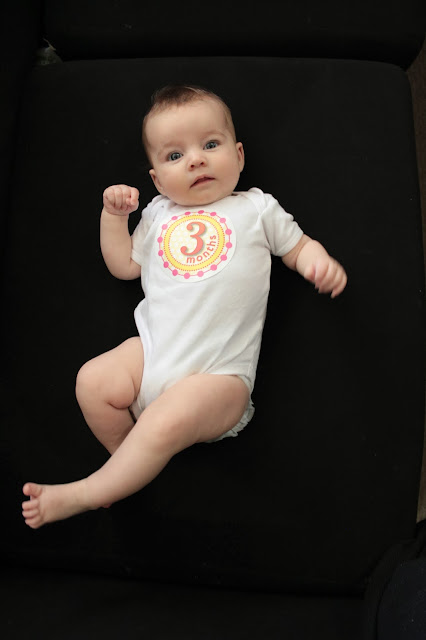 She's developed a neck now too. I never really noticed it until I had the girls, how newborns, in those first couple of months, they don't really have much of a neck. Well now she does. All the better to swivel around and spy on people. I also think she is probably gonna be rolling sooner rather than later. She tries so hard, on the rare occasion when she lets me put her on the floor without whinging. Her little legs go up in the air and then her middle twists and she's lying on her side, almost there but not quite. In this way she manages to follow Punky around a room. Heaven help me though, if she is anything like Punky she's gonna be crawling in 2 and a half months time and then life will really get interesting! 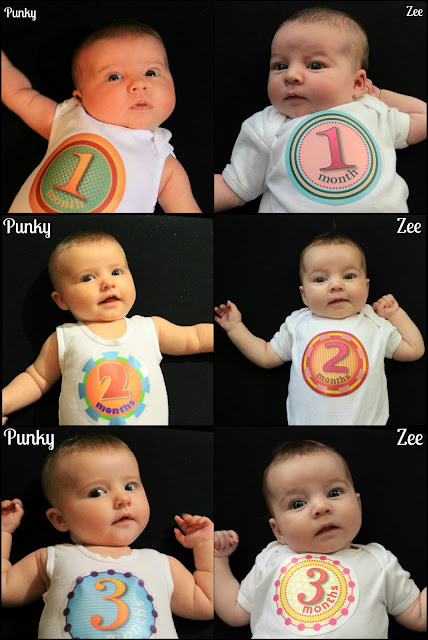 We also got Zee's first real laugh last Wednesday. The first time she did it was in the morning. Punky was rattling a beaded necklace in her face and she giggled. I missed it. I was still in bed. But that afternoon, at Mum's for dinner, it was Grandma that struck gold. I'm convinced that a baby's laughter has to be the best sound in the world. In fact the only thing that can top it is when your baby is laughing at her big sister laughing. Talk about magical!

Zee is absolutely fascinated by Punky. Mesmerised. Her eyes search a room for her like a heat-seeking missile. And when she finds her, she locks on and doesn't look away until Punky leaves the room again. She smiles whenever Punky smiles, she laughs when Punky does. I can just hear it now, Punky's future cries, "Zee won't leave me alone!". 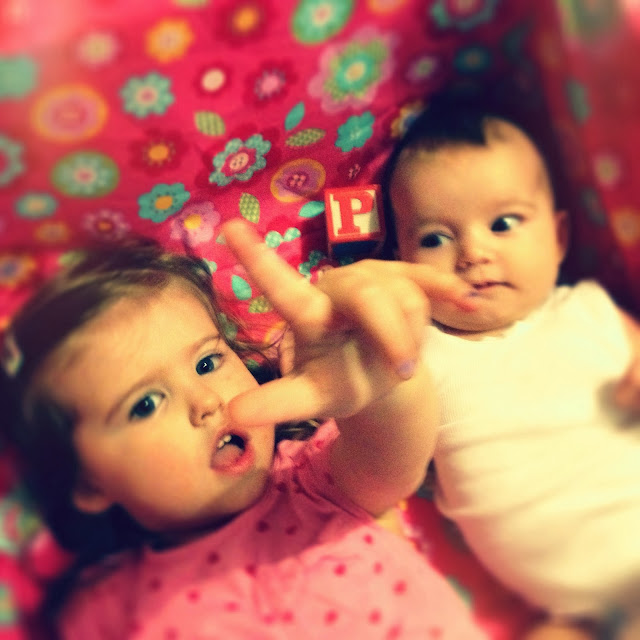 The feeling is starting to be mutual, Punky is a lot more interested in Zee now that Zee has become more interactive, so to speak. She says hello to her every time she sees her, she does little dances for her when Zee is sitting in the bouncer, and if Zee is crying she walks over and pats her on the head saying "Shhhh, ok" to comfort her. It just melts my heart. When I take Zee with me to pick up Punky from preschool, after she's exclaimed "Mummy!", she points excitedly to the baby carrier and says "Zee! Zee!" Zee is a bit easier to say than her actual name! 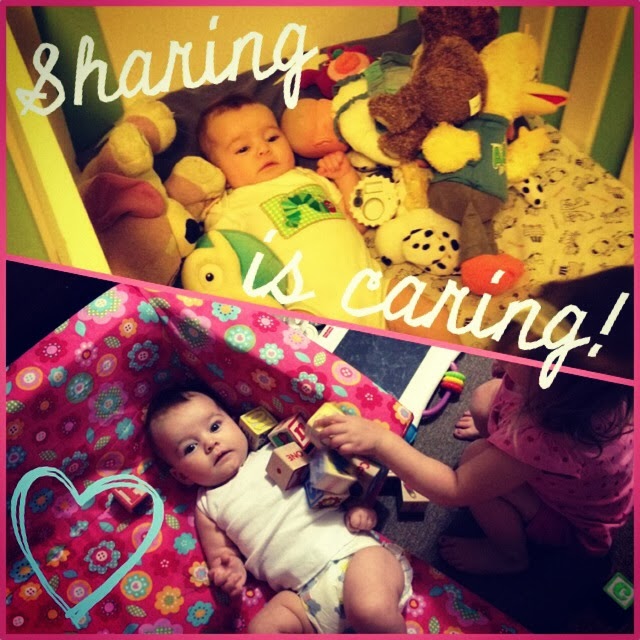 I've really enjoyed seeing this growing relationship between my girls. I know the road ahead is going to involve lots of fighting, bickering, hitting, hair pulling, wrestling, tickling, bribing, manipulation, teeth kicking, nipple cripples and attempts at strangulation, if my relationship with my sisters is anything to by, but I don't care. Because I know that along with all of that will be lots of hugs and kisses, and most of all laughs.


Three months. Three months of happiness, learning, readjusting, a few sleepless nights and a whole lot of smiles and joy. Three short months and the fourth trimester is over. We made it. We survived it. And now the fun really starts!

Kylie Purtell said…
Gorgeous girls. Time really does go way too quickly. It is so nice to see siblings get along!! My eldest 2 are either best mates or mortal enemies!!
6 November 2013 at 07:29

Kylie Purtell said…
Oh look at that little peeking out of the towel! Soo cute! 3 months is when it all happens. The 4th trimester is over and suddenly they're so comfortable in the world. It's a lovely stage. I love how curious they become and how social they are. Baby Vick, 4 months, is totally the same. Enjoy it, soon she'll be on the move and you'll be baby proofing! They never stay in one stage for very long sadly.
6 November 2013 at 07:40

Kylie Purtell said…
Kylie, I feel like I'm reading part of my journey this year on your blog. How crazy and beautiful is it having two girls. Don't they look different to each other too? I love the sharing is caring photo because my Esther did the same thing to Magdalene when she a was a newborn. Esther would get all her little farm animals and place them in the bassinet while Magdalene was sleeping because she of course needed toys to play with. A great post with beautiful memories to treasure. :)
6 November 2013 at 08:28

Kylie Purtell said…
You have the most beautiful children Kylie. Absolutely gorgeous. That movie put a big smile on my face. :)
6 November 2013 at 11:49

Kylie Purtell said…
Oh my goodness, what gorgeous little girls you have. I love how you've done the comparison shots. The first time my baby girl laughed, it was her brother rattling something that got the giggle out of her too! The photo of Zee sharing in fascination at her sister is just so precious.
6 November 2013 at 12:33

Kylie Purtell said…
So beautiful Kylie, and those comparison shots are amazing, aren't they? I love that last one too :)
6 November 2013 at 14:43

Kylie Purtell said…
What a gorgeous and loving family unit you are - every time I watch this video I laugh more!! Congrats on making it to 3 months :)
6 November 2013 at 15:58

Kylie Purtell said…
That video brought a huge beaming smile to my face. How blessed are you to have those two?!
It melts my heart too to see my girls getting along and love each other, but boy, can they scream and annoy the crap out of each other too!!
6 November 2013 at 21:42

Kylie Purtell said…
Ohhhh soooo cute! Love a baby laughing. Could there be anything better?
7 November 2013 at 19:36

Kylie Purtell said…
You can definitely see the resemblance between the two. Love the shot with the washer. Utterly divine!
12 November 2013 at 21:01