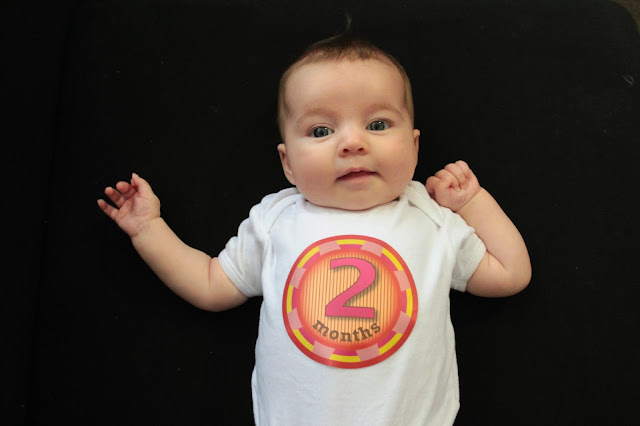 This last month has really seen Zee come alive. She makes lots of eye contact now and loves to have a chat when she is getting her nappy changed or after a feed. She has the most beautiful smile, her whole face lights up and it's an absolute joy to see. She especially loves it when I shake my hair in her face, or when her Daddy touches her nose and makes a funny sound. 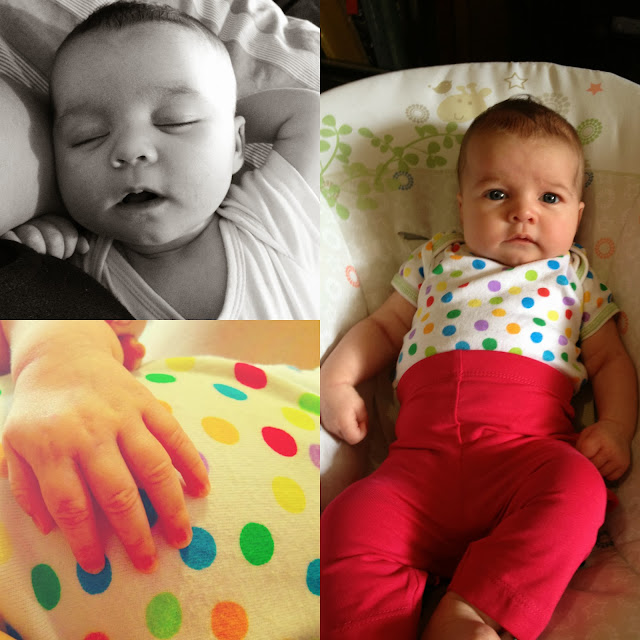 When she is sitting in the bouncer or lying on the play mat she is happy to stay there if Punky is in the room with her. Her eyes follow Punky around and she watches everything she does very carefully. She can sit for longer periods now in the bouncer or on the play mat, but if we all go and leave her by herself she doesn't like it and voices her displeasure. 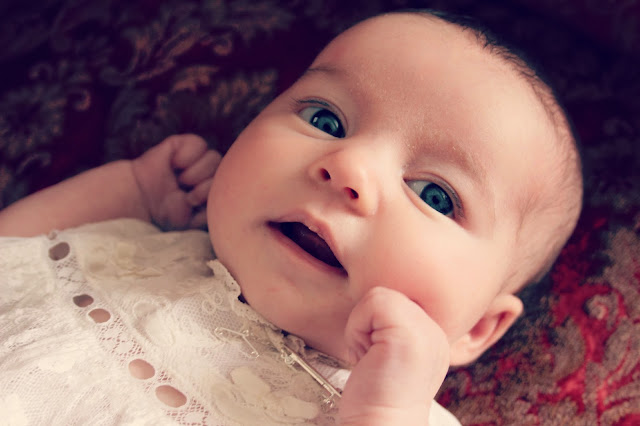 She's still a very easy-going girl, although she is proving to be much more sensitive than Punky was. She also loves to be held and cuddled a lot more and I find I am still spending most of my days with her attached to me.

The spewing has also slowed down somewhat, although she got a record when I took her to get her immunisations on Thursday. The nurse gave her the oral vaccine and as soon as it hit the back of her throat her gag reflex kicked in and she started spewing everywhere. It was pretty epic and the nurse said she had never seen a kid spew so much. I explained that she seems to have a ridiculously sensitive gag reflex. It's going to make life interesting when the time comes to start on solids. Punky doesn't seem to have any gag reflex at all so I'm a little unprepared for a child who does! 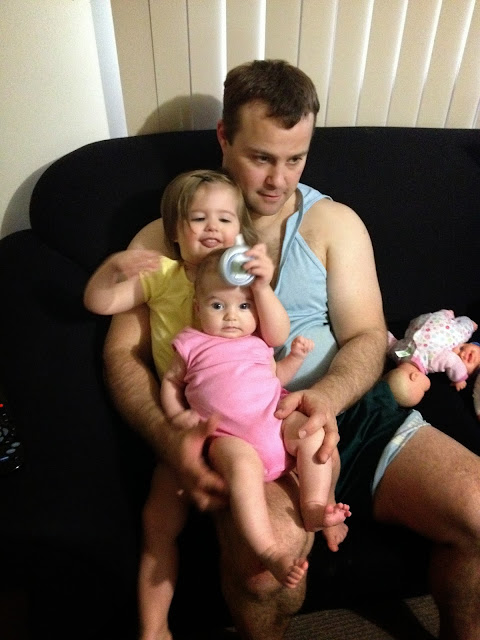 Zee's sleeping is still AWESOME overnight. She is pretty much in bed between 8-8:30pm and will sleep through till between 4am and 5am most nights, sometimes even making it to 6am before she starts grunting for a feed. But she is back off to sleep after that and then usually wakes again between 8am and 10am and sometimes even sleeps until 11am!

I've given up trying to get her to have sleeps a few times through the day, instead she has a little nap on mine or Dave's chest in the morning, and then again in the late afternoon/evening, and has one big nap in the middle of the day, just like Punky. It's actually working well as they are almost on the same routine which will help in the long-run, and means that there is always at least an hour or two where their sleep is overlapping and I can sit down and eat some lunch and get some stuff done around the house. Or blog!

The biggest challenge is really Punky to be honest. She is amazing with Zee, she loves her so much, she always wants to give her kisses and cuddles, asks to pick her up, and likes to point out and name all of her body parts. Just the other day I popped Zee in the bouncer so I could go stack the dishwasher before I put the girls down for their naps, and when I peeked around the corner to make sure Punky wasn't jumping on Zee I saw Punky walk up to her and wave and say hello, then lean in to make her wave back and gave her a big kiss. 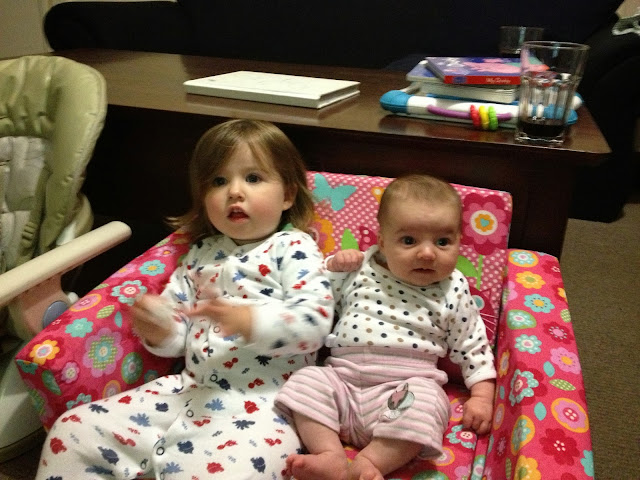 And while she is great in that regard, she has been getting a little jealous and angry with me if I am doing something with Zee (nappy changing or breastfeeding) and she wants me or wants something. So now I try to get Punky to come and help me when I am changing Zee and check with her if she needs anything before I feed her, warning that I won't be able to get up for a bit. There have been some epic tantrums and meltdown, but that is mostly her age and the fact that she gets so frustrated that she can't quite communicate what it is she wants. She is talking more and more every day but it's still tough sometimes and our days feature at least 10 outbursts of frustration and anger. 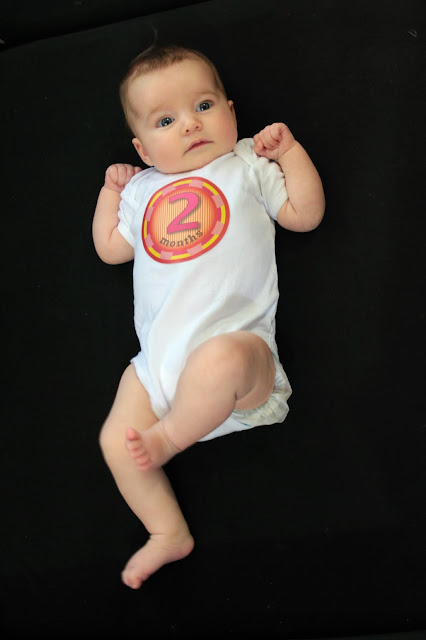 Apart from that though everything else is pretty good. Zee was weighed on Thursday and she's put on just over a kilo to be 5.3kgs and is now 59cms long! She is definitely longer than Punky was, and she is already fitting in to size 00 pants! I think she's gonna be long and lean. We are once again trying to get rid of the oral thrush, I thought it was all gone but it's come back and Zee's sensitive gag reflex is making it hard to get rid of. I have to stand at the sink to give her the mouth drops and only give her the tiniest little drops, bit by bit, to try and avoid triggering her gag reflex and spewing. I've learnt the hard way that it's best to give it to her in the kitchen with her propped on the edge of the sink, so that if she does spew it's contained and easier to clean up! 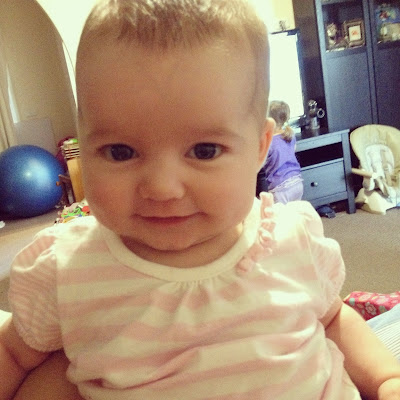 So that's it for this month, and while I am trying so hard to enjoy each day and not wish this newborn/tiny baby stage away, I am also really looking forward to the future, watching her grow and seeing her growing relationship with her sister.

Linking this post up, as always on a Tuesday, with Essentially Jess for IBOT.
Labels: IBOT Life My Family Zee

Kylie Purtell said…
It goes so fast I know with a newborn the second time around, but is also an amazingly awesome age for Punky - two-year-olds are so funny, annoying and demanding and it's hard to juggle. But sounds like you're doing a fab job, and promise me you are ignoring all the boring household crap because it's not something you will miss years down the track, watching your babies grow up is xxxx
1 October 2013 at 19:43

Kylie Purtell said…
Oh Kylez she is just gorgeous! Makes me miss having a new born with all their cuteness and constant changing. Give her a big squeeze for me xx
1 October 2013 at 21:15

Kylie Purtell said…
So big! It feels like it was only a second ago that you had her! She is gorgeous- and so is Punky. I always used to remind myself that is is really hard learning how to be a big sister. :)
1 October 2013 at 21:37

Kylie Purtell said…
I hope she keeps up the sleeping for you!! I have never had a spewer, the odd little chuck but nothing too bad. You have 2 very gorgeous girls!!
2 October 2013 at 07:45

Kylie Purtell said…
She is such a cutie! Looking very grown up for just 2 months old. I'm in the same boat with the toddler. The baby is breezy, the toddler is the one who brings grief and challenge! We'll get there :)
2 October 2013 at 09:26