I know everyone says this but I seriously can't believe it's been a month since Zee was born. On the one hand the time has just flown by, it's gone so damn fast. But at the same time, it feels like she has been here forever. 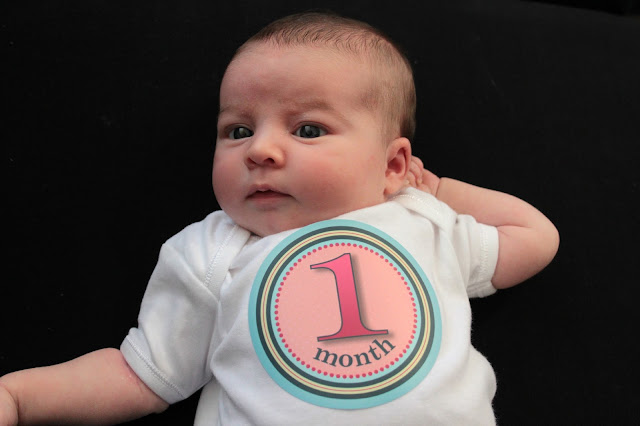 Zee has slotted in to the family so smoothly, she is just a dream to have around. She's so easygoing, but I'm not sure if that's because of her, or because I am much more relaxed and easygoing this time around. It's a chicken and egg kind of thing I guess.

In the last 5 weeks she's grown so much. At 18 days old she had put on almost 600 grams, and while we haven't had her weighed for a couple of weeks she is definitely much bigger at one month than Punky was. She is well and truly out of 4 zero's and in to the 3 zero clothes. And she has big feet!

She is incredibly strong too. While we haven't started proper tummy time on the floor yet, she has been having tummy time on my chest when I'm sitting in the rocker with it reclined. She can lift her head right up and look at me and turn it from side to side, it's very impressive. 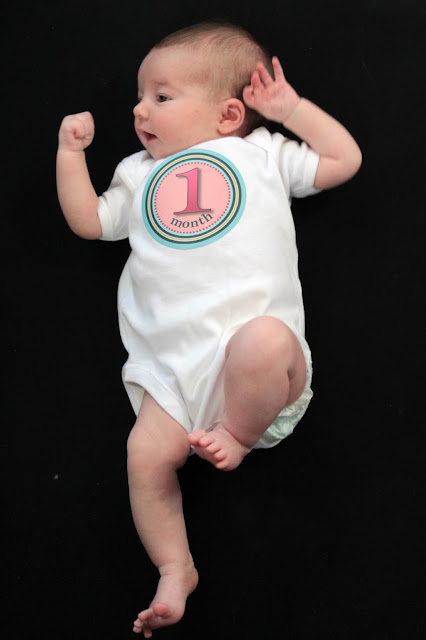 And I'm pretty sure she smiled at me on Sunday night. She has a lot of windy smiles, but this one looked like the real thing so I'm claiming it! Now I just need to get a baby book so I can't start recording these things so I don't forget them!

She has been feeding really well, no problems latching on (although we do still need to have a few attempts to get it right sometimes, mostly when she tries to 'help' me!). She is a bit spewy, but thankfully she doesn't do it as violently as her sister used to! In fact, the only real issue we've had with feeding is that we keep passing a case of thrush back and forwards between her mouth and my nipples. It's a pain in the arse and quite frankly I'm over it! Just when you think it's all gone it comes back. The amount of washing I've been doing to ensure I'm always using a clean towel and wearing a clean shirt and using clean burping cloths is crazy! Not to mention the amount of breast pads I'm going through having to change them constantly!
But apart from that everything else is great. She's turning in to a daytime catnapper but I don't mind because most nights she sleeps brilliantly (although now that I've put that out in the blogosphere she'll probably stop!). It's not uncommon for her to go 7 hours at a time during the night, which is great for my sleep, not so great for my bulging boobs by the time she finally wakes up for a feed! She seems to alternate by having one night where she will sleep for 7 hours straight, and then the next night she wakes every 2-3 hours. At least on those nights though she goes straight back to sleep after the feed.

I'm fully expecting it to all change once we hit the 6 week mark and customary growth spurt, but I don't care. It's nowhere near as scary as when I had Punky! 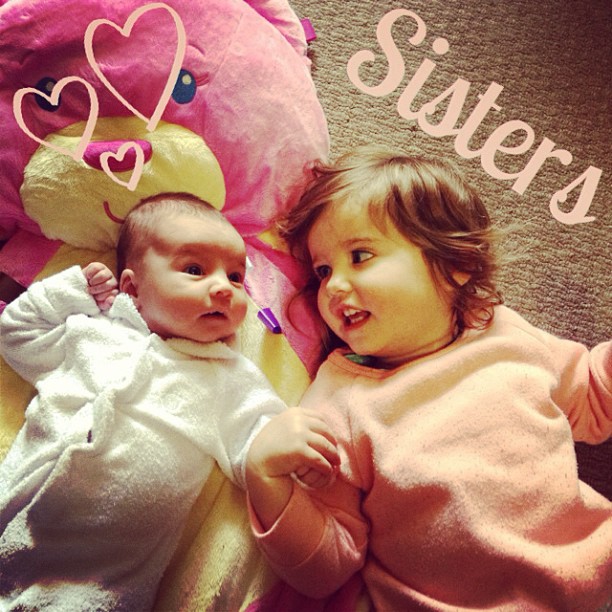 Dave is back at work now and I think we've done pretty well. There have been a few hairy moments with Punky when she hasn't been too impressed with me that I can't drop everything for her, especially when I'm in the middle of feeding Zee, but we are getting there. Thankfully she is a very independent kid and is mostly happy to go and entertain herself with her toys, iPad, books or dancing when I can't be with her when she wants. I haven't had to crack out the emergency Peppa Pig DVD yet, but Dave has only worked 4 shifts so far so give us time!

All in all it's been a great first month and I wouldn't change a thing. I do have to say though that I forgot how relentless newborns are. I mean, they only need three things, feeding, nappy changing and cuddles. But they need those three things constantly, around the clock, and it's certainly taken a while to get used to that again!

And with that I shall sign off. I'm going to put my mind to writing a suitably ranty post in the next few weeks because this here blog has just gotten too soft, descending well and truly in to the land of baby! And while I'm enjoying the land of baby quite a lot, I also need to stick my head out once or twice to stay sane!

P.S. In case you missed it, Part 2 of Zee's birth story is here

Linking up as I do every Tuesday with Essentially Jess for IBOT!
Labels: Life My Family Zee

Kylie Purtell said…
So happy to hear all is going well. You're really doing a stellar job. I love hearing about your two girls. You can tell how smitten you are
3 September 2013 at 06:49

Kylie Purtell said…
I love that you have an emergency Peppa Pig DVD! Very clever Mumma! It's so great to hear how wonderful things are traveling - you give me hope for what lies in my very near future. X
3 September 2013 at 06:55

Kylie Purtell said…
Good job mumma!! She is way too cute!! My little guy is out of newborn nappies and 0000, he had put on a whole kilo in 3 and a half weeks, little chunk!! All those hours sitting on my butt being a giant cow have certainly paid off!!
3 September 2013 at 07:58

Kylie Purtell said…
Gorgeous! Just gorgeous. Aren't sisters so beautiful together, a bond that will last for a lifetime.
3 September 2013 at 11:35

Kylie Purtell said…
Two beautiful girls, great to hear everything is going so well.
3 September 2013 at 11:46

Kylie Purtell said…
So glad that things are going so well for you. You have two beautiful girls xx
3 September 2013 at 13:59

Kylie Purtell said…
How cute is that goregous baby. Amazing how different your two girls but also how similar they are too. Goodluck with the next month :)
3 September 2013 at 14:45

Kylie Purtell said…
That month went super quick!
She is beautiful Kylez, and really quite different from Punky.Wonder how that will change as she gets older
3 September 2013 at 14:48

Kylie Purtell said…
So beautiful. With each of my babies I found it really hard when you move from stating their age in weeks to stating it in months. I wanted to slam the brakes on so hard and drink everything in. My baby is now 476 weeks old. just a newborn really :-)
3 September 2013 at 15:01

Kylie Purtell said…
Ha ha yes get your ranty pants on and stop making life look so easy with 2 under 2!!! HA HA just kids. Day nappers are fine if they sleep at night I agree xx
3 September 2013 at 15:04

Kylie Purtell said…
What a cutie petutie! I felt the same with Tully - she was a much cruiser baby than Flynn, but I'm still yet to figure out whether its because I was a more relaxed Mum the second time round, or whether its just her nature!
3 September 2013 at 20:42

Kylie Purtell said…
Happy one month old to your baby girl! Love the photo with the two sisters!
3 September 2013 at 21:30