You may have noticed the button above in my sidebar (or if you're ignorant of all things sidebar like I tend to be then you probably haven't!) about The Little White Dove 13/13 Reading Challenge. It's a reading challenge issued by The Little White Dove (duh!) to read 13 books in 2013. If you know even the smallest thing about me you'll know that I get massive lady wood for all things books and reading, so joining in a reading challenge for 2013 was a no-brainer! You can read my first update here, and my second update here.

So, I've almost finished the challenge. One and a half books to go. That's not a shabby effort in 7 months if I do say so myself! Considering in those 7 months how much we have had on, not to mention work, toddler-wrangling and baby-growing! 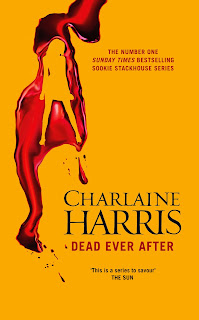 After I finished the Newsflash Trilogy I needed to return to something that was familiar and what better way to do that then with 13th and final book in the Sookie Stackhouse series, Dead Ever After.

It wasn't a bad read, and I can't say I'm too surprised by the ending, but I would have liked a little more closure for some of the characters. Yes, Sookie is the main character, and so of course it's right that all the action centered around her, and we did get a wrap-up for nearly all of the characters that have popped in and out of the books throughout the series.

But the characters I think she really let down in this final book were the ones that without, there would have been no Southern Vampires series. The vampires! I don't think Bill and Eric, especially Eric, got the treatment they deserved and I found that a little unsatisfying. having said that though, I can't imagine the pressure on Charlaine Harris when it came to ending the series in a way that would keep the majority of fans happy and I think in that regard, and the fact you're never going to please everyone, she did a pretty good job. 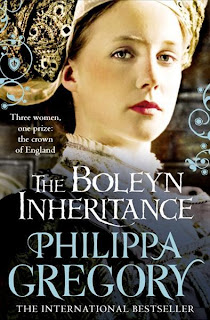 After putting the dead to rest for the last time I moved back in time, to the world of the Tudor Court. I've read quite a few Philippa Gregory books, starting with The Other Boleyn Girl and I've really enjoyed them all, and The Boleyn Inheritance was no exception.

The Bolyen Inheritance follows the story of three women of King Henry VIII's court, Anne of Cleves, his 5th wife, Katherine Howard, his 6th wife, and Jane Boleyn, widow of George Boleyn, Anne Boleyn's brother, who was executed along with Anne.

I found the story to be fascinating and so tragic, three women with no real control over their futures, doing all they can just to survive in the dangerous would that is King Henry's court. The story of Katherine Howard, barely 16 when she was married to the King, is particularly tragic. Granted these books aren't accurate reflections of history, but Philippa Gregory, being an historian, takes great care to back up her fictionalised world using what actual facts are known about these women. 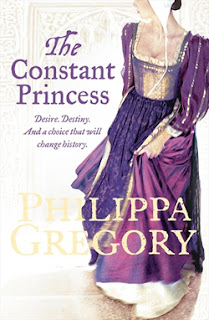 After finishing The Boleyn Inheritance I started on The Constant Princess, a book I've had sitting on my bookshelf for a little while now after I found it for $7 in one of those pop-up bookstalls in the marketplace. The Constant Princess focuses on Katherine of Aragon, King Henry VIII's first wife, and widow of his older brother Arthur.

I have only managed to get halfway through it as I have been distracted by all things baby-making at the moment and getting stuff ready for the imminent arrival. I figure it's probably going to be a while before I actually finish it but that's ok because the next book I really want to read, the new Bridget Jones, isn't out until October I think.

So anyway, that's where I am at, as at the end of July. Not knowing what this new bubs is going to be like I'm not sure how the reading will go from now on but hopefully I'll get a few chapters in here and there!

Have you been reading anything new lately? Any suggestions for me to add to the To Be Read list?

Linking up with the awesome Grace for Flog Yo Blog Friday
Labels: Books Reading

Kylie Purtell said…
You're doing really well considering how busy your life is. I'm a huge True Blood fan, but have never thought about reading the Sookie Stackhouse series. I think I might have to give it a look. The Constant Princess sounds good too. I've just finished 100 years of solitude. I don't know if I'd recommend that though, and I've just started The Rosie Project :)
16 August 2013 at 06:52

Kylie Purtell said…
I'm reading World War Z, which is good - has some interesting ideas on human behaviour and how the different geopolitical situations would create different reactions and outcomes in the zombie apocalypse. So much better than the movie, which was stupid...
16 August 2013 at 06:55

Kylie Purtell said…
Well done to you. Just reading about reading makes me envious. I can't wait until I can read more than just a page or two again, before falling asleep or having a kid climb on me.
16 August 2013 at 07:28

Kylie Purtell said…
You've done a marvelous job! The Philippa Gregaory books sound interesting. I watched the movie The Other Boleyn Girl and that was interesting. Would love to read the books!

Kylie Purtell said…
Gah! This gives me a kick up the bum. I've all the excuses under the sun about being "too busy" etc. etc. - you know the ones? - but that's all they are, excuses. I love to read so need to find the time to do the thing I really enjoy. Maybe I need to sign myself up to something like this? Or maybe a smaller pledge to start? Goodness knows I've a whole bookshelf of titles to choose from... Happy reading, lovely lady. X
16 August 2013 at 08:57

Kylie Purtell said…
Some great books there Kylie! I love to read books and there are a couple here I haven't read yet so will definitely add these to my reading list.
Visiting from FYBF and Sweet Little Pretties
16 August 2013 at 11:08

Kylie Purtell said…
I love reading but lately my desire to read seems to be coming in highs and lows, I will read a few books in quick succession and the not touch anything for weeks on end. Have you read Juliet by Anne Fortier (I think), it is a really good story. It is an adaption of Romeo and Juliet, but told more along the lines of Da Vinci Code as the main character is trying to piece together her family history.
16 August 2013 at 11:40

Kylie Purtell said…
Wow, good on you Kylie, with a new bub and all! I love reading and have a stack ready to go, when I get myself organized, no excuses just slack! x
16 August 2013 at 11:52

Kylie Purtell said…
I love reading, but I am really hopeless at challenges. Well done, you deserve a big congrats for that.
16 August 2013 at 20:35

Kylie Purtell said…
That is one incredible list of books! I am a big book worm but haven't got any good ones to recommend! I usually try to read at night time but fall asleep before getting through a chapter, and I like to escape with romance novels!!
17 August 2013 at 19:04

Kylie Purtell said…
I am envious, and well done to you. I haven't read anything near to a novel for donkeys. The Gregory books sound really interesting :)
17 August 2013 at 21:39

Kylie Purtell said…
I must say I have impressed myself getting through so many, I didn't think I'd be able to do it!

Kylie Purtell said…
I have World War Z on my kindle waiting to be read, I'm really keen, I've heard so many good things about it. haven't seen the movie, don't think I will bother once I've read the book, books are almost always better!
18 August 2013 at 13:50

Kylie Purtell said…
I have to say the majority of my reading in the last 3-4 months was done at night, before bed, while eating my gestational diabetes-mandated before bed snack. And I have to admit I am kinda missing those 20 minutes of solitude with nothing but my book and some weetbix!
18 August 2013 at 13:51

Kylie Purtell said…
I really enjoy the Philippa Gregory books, you should totally check them out. The Other Boleyn Girl is really good and an excellent one to start with.
18 August 2013 at 13:52

Kylie Purtell said…
I know the feeling. Having to have a before bed snack for the gestational diabetes was really the only way I managed to get so much reading done, I had to sit there and eat before bed so I made that my reading time too!
18 August 2013 at 13:52

Kylie Purtell said…
I know that feeling so well! Despite being a massive bookworm I do find I have periods where I'm a voracious reader, and then can go months without reading anything. I hardly read a book in 2009 but then read close to 60 in 2010!


I have heard about that Juliet book, I think I read a review for it and thought it sounds like something I would enjoy. Thanks for reminding me, I am adding it to me list now!
18 August 2013 at 13:54

Kylie Purtell said…
I did my best to get as much done as possible before bubs arrived and its definitely paid off!
18 August 2013 at 14:01

Kylie Purtell said…
I had to stop reading in bed because I would do the same thing. One day in the last few weeks of being pregnant recently I lay in bed one afternoon to do some reading and woke up two hours later having lost my spot and covered in drool. I don't think I even managed to read one page before I zonked!
18 August 2013 at 14:10

Kylie Purtell said…
The Gregory books are great, and there are so many of them. And because they all centre around a similar period in history its fun to see how the various players all fit together on the family tree.
18 August 2013 at 14:11

Kylie Purtell said…
You're welcome. Thanks so much for visiting back, it's so kind of you. I'm glad you loved your guinea pigs as much as I love mine. They are so adorable and make really good pets if you care for them properly.
20 August 2013 at 19:26

Kylie Purtell said…
They so do! We will probably get some more one day when the girls are older and able to help us care for them, I know they would love them.
21 August 2013 at 13:32