We would all like to vote for the best man...

We would all like to vote for the best man but he is never a candidate.
Kin Hubbard 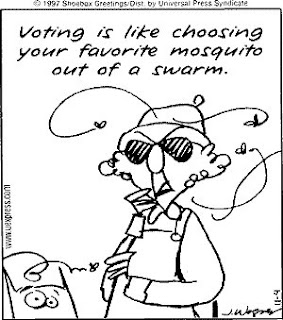 The two major parties in this country are a joke. The Liberal/National Party is no real alternative to this farce of a Labor Party, both characterised by ridiculous PR campaigns (Rooty Hill anyone), infighting, backstabbing and general childishness. 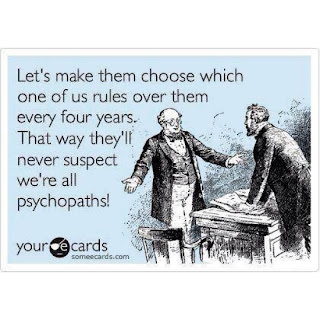 Kylie Purtell said…
You know what? I'm not a bug follower of politics because it IS such bull crap - I have better things to do than waste time trying too keep up with who's promising what this week. However, I've never seen anything so contrived as this 'Julia at Rooty Hills ' gimmick....
8 March 2013 at 08:51

Kylie Purtell said…
There's a lot of shaking up needing in Singapore too. The current ruling party got pretty complacent and I'm glad the people are starting to have balls to make noise and start a change to let them know if they keep this up, they may not be the ruling party anymore.

Kylie Purtell said…
This Country as far as I am concerned is in a world of trouble.....
Have you ever thought of a career in politics ?
You would have my vote :)
Stopping by to say HI via FYBF
8 March 2013 at 11:33

Kylie Purtell said…
Go you, bring some sense into it and get rid of this stupied two-party shit-throing. Both parties often appeal to the lowest common denominator and appear to care only about re-election... in the public and in the media... I am so NOT lowest common and it sickens me. In private I am sure most are clever and caring people... lets see more of that. Harumph!!
8 March 2013 at 12:46

Kylie Purtell said…
It's great to see others caring about their vote even in such politically frustrating times!
8 March 2013 at 12:56

Kylie Purtell said…
You'd do so awesome, Kylie! Do it!
My friend ran for local council last year and I helped her out on the social media side. Candidates were very petty, bitchy and aggressive but she stuck it out! She didn't get in but what an experience! And I reckon you've got the thick skin to get past all that.
8 March 2013 at 21:24

Kylie Purtell said…
Politics do piss me off too - there's so much wastage of time and money that could be wisely spent elsewhere and that's where I'll stop 'cause I could rant on and on and on. I'll vote for you Kylez!! xx
9 March 2013 at 14:31

Kylie Purtell said…
I will vote for anyone but that slimy Bertie Crouch (Abbott totally reminds me of that character in Harry Potter)
9 March 2013 at 14:33

Kylie Purtell said…
Go Kylie! You have just the right personality to do it!
Our chief minister has made some really tough decisions, which have involved a huge power hike. It's not going to win him any votes, but it needed to happen. The last labour government that was in completely neglected the required maintenance for years, and if something isn't done now, there will be no power. I admire him for that, whilst simultaneously hate the surcharge. It's not an easy job by any stretch of the imagination
9 March 2013 at 15:20

Kylie Purtell said…
Go for it Kylie! I'd vote for you, and I've got two experienced campaign managers who can help with your campaign x
10 March 2013 at 19:45

Kylie Purtell said…
Politics SERIOUSLY pisses me off! This is a great post. I typically vote labor. one of my best friends is liberal. We both understand that given our family/financial situations different parties benefit us more. It's just a shame there's not one party who can benefit the majority - why should families miss out? But why should small businesses pay tax through the nose and not get any help? Very frustrating, and I'm not at all thrilled about the outcome of the September election - mostly b/c I think both results will suck! I too have thought about trying to get involved but I'm afraid it would be too damn frustrating!
11 March 2013 at 14:25