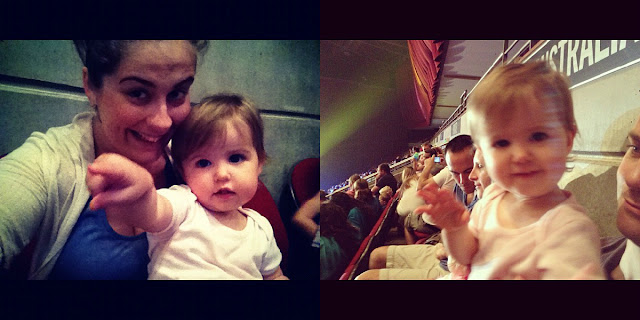 Last Sunday we took Punky to see the Wiggles with our friends and their daughter. She was mesmerised by all the lights and the kids dancing 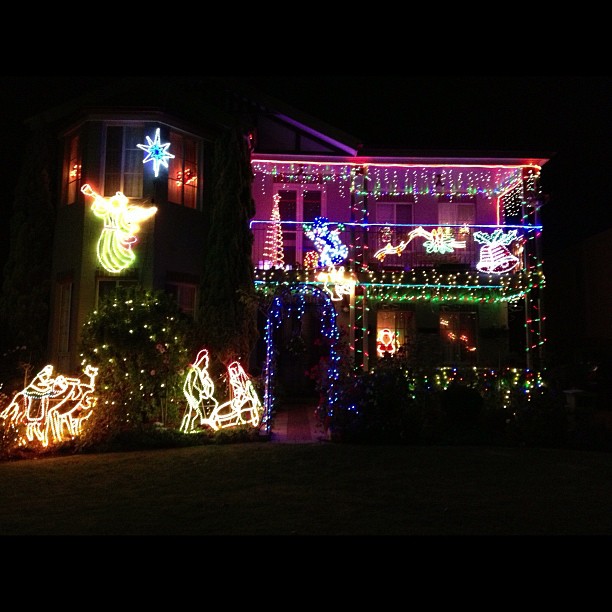 On Wednesday night, after dinner at Mum's, we headed over to Mount Annan, near Campbelltown, NSW. There is a section there called The Cascades and they have these huge houses and heaps of people get really in to the Christmas lights spirit  and go all out. It's incredible to see, some of the houses are just amazing. One guy told us its takes him at least 6 weeks to get everything set-up, and he has to get his son and son-in-law to help him, its such a big job. 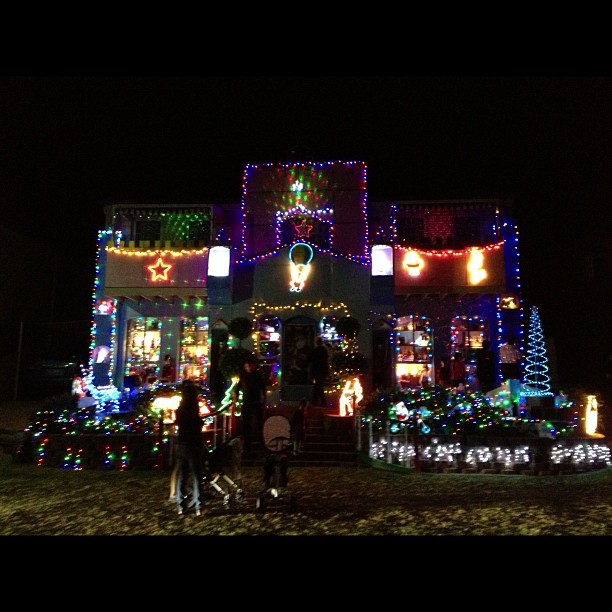 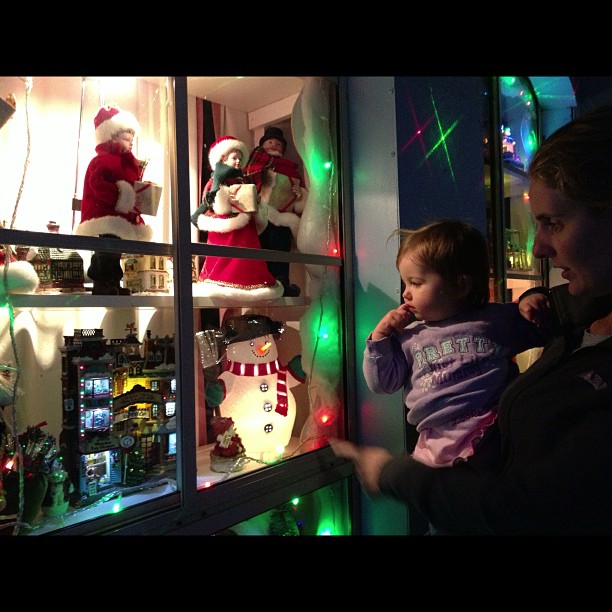 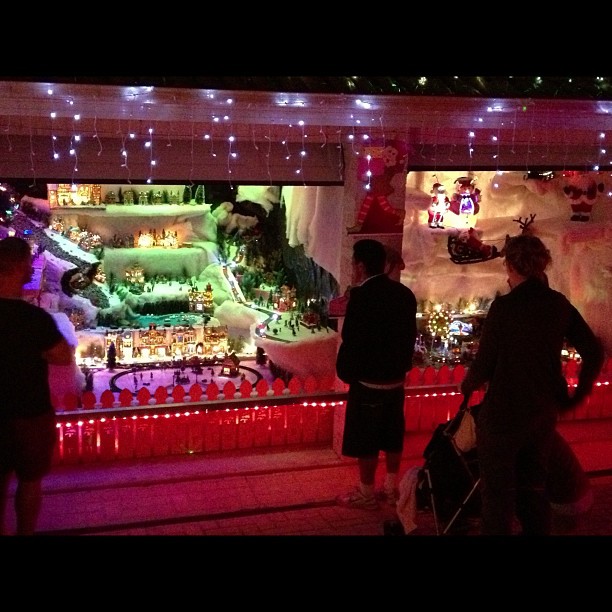 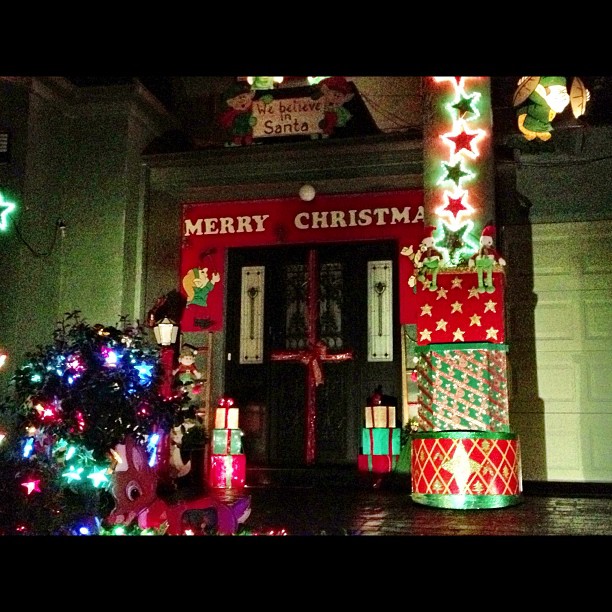 This house had giant presents around the two front columns (to the right of the front door above) and they had a ribbon on the front door to make it look like a giant present!
If you live in Sydney I would highly recommend checking it out... but go on a weeknight this week, park your car an d walk around, much easier and you get a better idea of the lights. Weekend nights are crazy, you can barely get in there, let alone find somewhere to park your car! 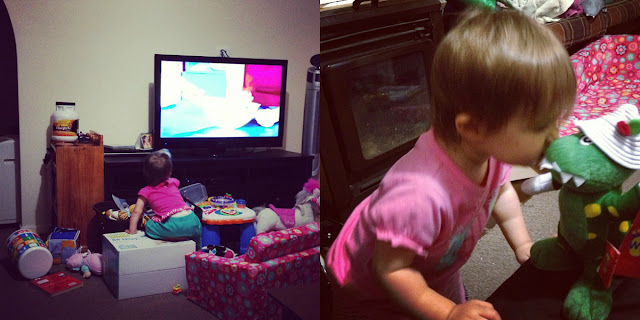 Who wants to sit on their lounge, or a proper distance from the TV when Play School is on and you can sit on a box! Punky got a Dorothy the Dinosaur toy today from our friends that we went to the Wiggles with last week. She loves her and gave her lots of kisses. 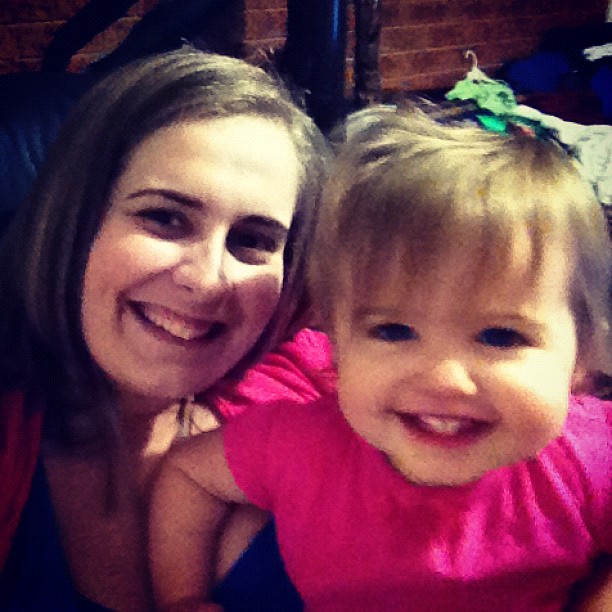 I realised the other day that Punky is finally getting the hang of smiling for a photo rather than just trying to rip the phone out of my hand! She still tries to grab the phone, but she at least smiles and waits till after I've taken the photo now!

So that's my week according to Instagram. A quiet one this week, mercifully, after the last few weeks we haven't had a lot on so we have just been hanging out and getting stuff done around the house. Makes a nice change from super hectic!

Linking this post up with the fabulous Tina Gray who hosts this equally fabulous link-up!

Catherine Rodie said…
Those Christmas lights are awesome! I have to take my girls out to see some of the houses in our neighbourhood.
16 December 2012 at 12:45

Unknown said…
Gorgeous lights. I do lights! All on my own and it takes about 10 hours to get them all up and working the way you want. Nothing flash just so the kids have something to enjoy.
16 December 2012 at 13:56

Aroha @ Colours of Sunset said…
your little one is soooooooooo cute!! and those Christmas lights are amazing!! We did the Christmas light thing this week, too!
16 December 2012 at 16:06

Rhianna said…
Looks like a great week. Those lights are amazing. Mia is just too cute for words.

SlapdashMama said…
Those lights really are the business! We live on a Christmassy street but not in their league at all!!!
16 December 2012 at 18:33

EssentiallyJess said…
I saw your pics of the lights during the week and was amazed by them!
We have a street in Darwin where people usually go all out, but this year it has been really empty. It's so sad :(
16 December 2012 at 23:50

Me N my Monkeys said…
Looks like a great week was had.
The Christmas lights look awesome. We have a street in our town where almost all of the houses put alot of effort in to being all christmassy, we love it. :)
Great pics!
17 December 2012 at 10:31