These last two weeks have been hectic. Major. Epic!

There really are no words to describe them.

On the 17th November we celebrated my cousin S's wedding at Clovelly. One of the best weddings I've ever been too, it was so beautiful, so laid-back, so S & G.

The following weekend we celebrated Punky's 1st birthday. It was stinking hot but another fabulous day. My amazing friends and family showed up for a party in the park and made it something really special for Punky, Dave and I.

Which brings me to the weekend just gone.

On Saturday the 1st December, my baby-sister got married!

It was also my Dad's birthday.

My sister's wedding, despite the 40 degree heat and lack of air-conditioning in the venue (which was advertised as air-conditioned!) was absolutely superb.

We kicked off the festivities on the Friday, starting with us girls getting our nails done and having lunch.

We then headed back to Mum's for a big family BBQ with our immediate family and Sam's family. Another stinking hot day, A, E & I made sure we spent a good deal of the time waiting for dinner to be ready in the pool. Punky had a swim with us too and I tell ya, that kid is freaking water baby! Swimming lessons here we come! I am so glad Mum did the opposite of what most parents do and put IN a pool once we were all grown up, rather than taking OUT a pool!

Saturday morning was a little hectic, Mum and I were running around picking up the cake and getting it out to the venue, as well as getting cash (to pay hairdressers and make-up artists) and nibblies for the bridal party.

Katie was a little quiet to say the least. I think the reality of not only getting married but also leaving Sydney was starting to really sink in.

Once the wedding got underway though she perked right up and was the most stunning bride. I was so proud of both of them, standing in front of that alter.

The reception was a seriously drunken affair, with the heat and lack of air-con most people got absolutely hammered. Not surprising really!

Dave took advantage of the fact it was our first child-free night and got completely and utterly wasted! None of my extended family have ever seen him like that and he was a hit. Dave is a pretty hilarious drunk so everyone loved it!

The food was amazing, the speeches fabulous, the atmosphere festive. We didn't forget that it was Dad's birthday though, and when everyone was in the pub drinking and hanging out before the reception started they all sang Happy Birthday to him, which despite his protestations, I'm sure he was chuffed about it. 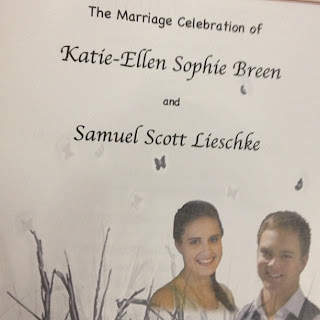 Because I was singing at the ceremony and MC'ing the reception I didn't get to take anywhere near as many photos as I would normally take at a wedding so I don't have much to show but I've popped a few from my iPhone in for you.

The only downer on the day was the fact that my Aunty J couldn't stay after the ceremony. She is extremely sick, suffering from pancreatic cancer (that fucker!) and the heat was too much for her. The fact she made it to the ceremony though is amazing considering the prognosis from the doctor and I know we were all so happy to see her. We're all just hoping she can hang on till Christmas.

The night ended with Dave lying drunk on our hotel room floor asking me when I was going to seduce him! Let's just say that didn't happen and I ended up sleeping in the 2nd double bed in our room. I figured it was my first Punky-free night since she was born and dammit if I wasn't going to get some decent sleep without a drunk tossing and turning beside me! 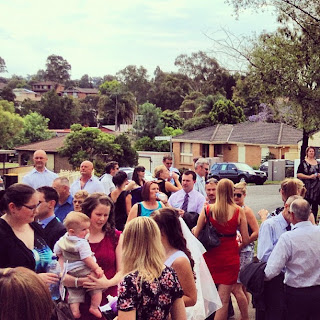 Today is said-drunk's birthday and he has the week off work. He is currently having a seep-in while I type this and Punky plays in the loungeroom. It was the least I could do seeing as I don't actually have a present for him!

So, my sweet, sweet drinking man, I love you with all my heart and wish you the happiest of happy birthdays!

I'll let you sleep-in but don't think you're getting out of changing nappies! 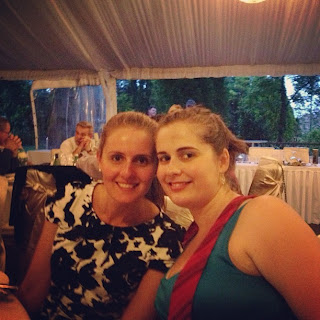 Sister A and I
No photobombers this time! Yay! 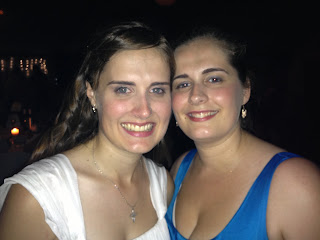 The gorgeous bride and I 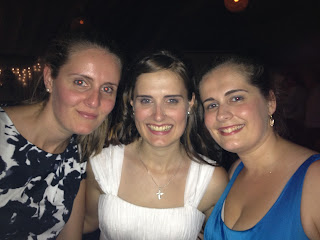 Sister A, gorgeous bride and moi 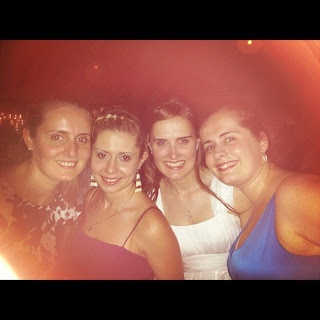 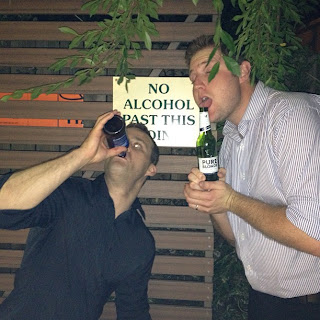 This was at the 'official' end of the night!
My birthday drunkard and our brother-in-law J

Linking up this post as always on a Tuesday with the fabulouso Jess for
I Blog on Tuesdays!

Unknown said…
Christmas will be a breeze after the weeks you've had!

Really wonderful that your Aunty made it to the ceremony, making a special memory for you all.

E. said…
What a celebratory few weeks you have had. Congratulations to your cousin and your sister on their weddings.

I hope your Aunty J isn't in too much pain. How lovely that she managed to get to the wedding.

Mrs BC said…
My gosh you need a holiday after all that excitement! How funny of your husband, I love to see my husband loosen up, although it hardly ever happens. He works so hard and is normally such a grownup. Sounds like your hubs needed a week off to recover!
x
4 December 2012 at 11:18

Mums Take Five said…
OH good i've been waiting for photos!! i keep checking her blog for photos she was looking awesome on the 28th post lots of hard work went into that bod! good to see fun was had by all.
4 December 2012 at 12:08

Ai Sakura said…
Wonderful celebrations! Congrats to the newly-weds and happy birthdays to those celebrating! :) Dec is off to a roaring good start for u it seems!

Jodi said…
Your Dave sounds like my hubby (also named Dave), the comment about lying pissed on a hotel room floor asking when he is going to be seduced, sounds oh so familar! :)
4 December 2012 at 13:16

Unknown said…
Beautiful pics! I'm gonna have to go and get my nails a shellac(king) one of these days, yours look so awesome! Lets please not talk about drunks husbands though … mine has JUST been allowed out of the doghouse ;)
4 December 2012 at 13:52

Housewife in Heels said…
Looks like you've been busy! Your sister looked stunning. Glad to hear the day was a success :)
4 December 2012 at 14:19

Kel said…
He is one of the most hilarious drunks I know! Happy birthday Dave. Lol at the seduction request.
Did anyone film the ceremony? I'd love to see you singing again! And how'd you go with the MC'ing? Did you pull out any "Russel the love muscle" lines? hahaha x
4 December 2012 at 14:39

Shari said…
Looks like a gorgeous wedding and how special that your Aunt made the ceremony. It's funny how drunk husbands think they've got it made ;)
x
4 December 2012 at 15:22

Unknown said…
how wonderful that your Aunt made it to the wedding!
Blue nails - looks great!
xx
4 December 2012 at 17:10

J Bott said…
My baby sister got married on the weekend too! It looks like it was lots of fun! Relaxed is the key to a great wedding!
4 December 2012 at 18:57

Anonymous said…
Great pictures! Congratulations to your sister! And happy birthday to your partner! Oh! I just realised your sister has a blog too! I'm off there to say congratulations!
4 December 2012 at 19:18

Anonymous said…
That last photo made me fall in love with your husband.

Carly said…
I love the sound of your family get togethers. I miss events like this a lot.
Thanks for sharing, I saw your instagram photo's on the weekend and enjoyed following your day.
4 December 2012 at 21:51

EssentiallyJess said…
As I said on IG, you all look so much alike!
Glad the wedding went so well and happy birthday Dave!

Janet Camilleri said…
Wow, you HAVE had a pretty big couple of weeks! Great photos of you & your sisters especially :-)
5 December 2012 at 18:49

Kylie Purtell said…
Yep, Dave is the same. He hardly ever gets a chance to just relax and have a few drinks these days, so on the rare occasion that he does he really does!
13 December 2012 at 12:31

Kylie Purtell said…
It was a fabulous day/night. Katie is currently on her honeymoon but they get back on Saturday so I am hoping she will be able to do some posting next week. Hopefully she will get her professional pics before Christmas. Can't wait to see them.
13 December 2012 at 12:32

Kylie Purtell said…
He was very drunk and he wasn't only one this time for a change! There were quite a few hammered people due to the heat. People were drinking alcohol like water!
13 December 2012 at 12:33

Kylie Purtell said…
It certainly is. I'm looking forward to Christmas and getting a break!
13 December 2012 at 12:34

Kylie Purtell said…
Yep, we are the Breens. My Dad's Dad dies when he was quite young though so he doesn't know lot of his extended family. We could very well be distantly related!
13 December 2012 at 12:36

Kylie Purtell said…
I totally recommend the Shellac. It's been almost 2 weeks now and they are still looking perfect!
13 December 2012 at 12:36

Kylie Purtell said…
Weddings are the best! Definitely one of my most favourite social occasions.
13 December 2012 at 12:37

Kylie Purtell said…
Hahaha, no Russel the love muscle lines, but I did have one or two funny ones up my sleeve. Sam's sister was my fellow MC and she had everything she had to say, and the entire thing all scripted. I of course did my usual and just winged it it one or two notes on my phone to refer to! I'm pretty sure the ceremony was recorded although I don't know what the quality will be like, Dave was in charge of the camera!
13 December 2012 at 12:43

Kylie Purtell said…
Dave always thinks he's the King of the World and Dead Sexy when he is drunk. He's lucky he doesn't end up dead when drunk!
13 December 2012 at 13:27