I find that the more I try to stop swearing in real life, the more I have started to swear on the blog.

It's starting to become clear that I need to curb the amount of swearing I do around the house now that I have a munchkin who is starting to listen to everything I say and will one day start repeating it back to me (and my mother!). I really don't want to be put in the awkward situation of her telling someone to piss off, or calling someone fucknuts, so I figure I need to start watching my language now. 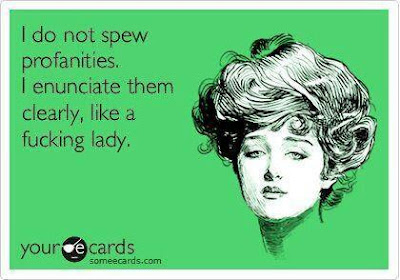 It's harder than you would think. I didn't realise how much I actually swear until I started trying not to swear. I've always enjoyed a good swear, and it becomes most pronounced after I get a few drinks under my belt, but I never realised my fave exclamation of exasperation is in fact "Fuck me dead!" or "Fuckin hell!".

Both expressions leave my mouth far more frequently that I ever would have thought and so I am now trying to tone it down and find new words, words that are perhaps not so bad, but I will know what I mean when I utter them in frustration.

...that's it. That's all I've got so far I often say 'shite', but then I figure that is still very much like 'shit', and 'ship' is just so close I may as well say the real thing. So I haven't worked anything out for that one yet.

Funnily enough, the one place I swear the least, is when I'm driving. I say funnily enough, because I tend to be a road ranter. Not rager, ranter. I rant at idiots on the road. And when I get really worked up I call people that are being dickheads 'sunshine'. Weird right?

We were driving somewhere not that long ago and traffic was being stupid and I was starting to get my rant on, and Dave turned around to Punky and said "Your Mum's gonna start calling people sunshine if they don't get their act together!".

Other swear words I'm quite partial to, and like to use on a regular basis are dickhead, fuckwit (as opposed to fucknuts, fuckwit is the next level up), and asshole. Nothing too creative, just your garden varity swear words. I have been known on occasion to drop the C-bomb, but only if I'm really, really, super-duper, pulling my hair out, crazy mad. Like too angry to even throw a shoe mad. It has to be a really top-of-the-line, nuclear-level explosion of fucking shit to get me to drop that C-bomb, and even then, I'll only ever do it in front of my husband.

So due to my efforts to curb the language at home, I find it's started to creep in to blog posts. I'm trying to keep a lid on that too, but ladies and gentleman I fear that no lid is strong enough to keep my swearing tendencies underneath it, so I apologise in advance if swearing offends you and you're not happy with me for doing it. I promise I won't call you fucknuts or tell you to fuck off. Well, not on the blog anyway. I'll just think it!

There is one thing that has been bothering me though, and that is how you decide what is acceptable language for your child to hear and what isn't. Some people have a problem with the word 'bum', and don't like their children to say it. I don't really have a problem with it, but I wouldn't want Mia to say it to someone who might. Some people also have a problem with the word 'fart', but I personally think that no other word for popping off really gives it the same justice as the word 'fart' does. But I have been  trying to use the words 'butt' and 'fluff' when I talk to Punky, lest she use the alternatives and people wonder what sort of manners I'm teaching my daughter. (And you're probably wondering what sort of conversations I'm having with her that those words feature regularly!).

So, tell me, what words are acceptable in your house, what do you teach your kids to say? Do you swear in front of them? What words do you use as swear words when you can't use an actual swear word?

P.S. Crap is not a swear word in my vocabulary and I will continue to use it freely in all it's glorious forms, crap, crappy, craptastic, crappy crapperson and holy crapola, to name just a few.

Linking this post up for the fabulous Friday linky's, Bree's Flash Blog Friday and Grace's Flog Yo Blog Friday.

Kel said…
I could have told you about your tendency to exclaim 'fuck me dead' lol
Bum and fart are acceptable in our house but not at the carers, so J often tells me I shouldn't say bum. Crap is not permissable, I just don't think it sounds any good coming from a tot. So J and H opt for HOLY MOLY and I think I'm going to try and adopt this.
12 October 2012 at 09:32

Kylie Purtell said…
Yep, I think crap is going to have to be one of those words that only Mummies are allowed to say! Holy Moly is cute, I have heard J say it and my heart melted just a little bit.
12 October 2012 at 09:49

Kylie Purtell said…
And it's funny that you noticed I say 'fuck me dead' when even I didn't realise how much I say it. When I really think about it, it's probably the one I use most. For shame!
12 October 2012 at 09:50

Ai Sakura said…
Bum and fart are swear words to some?? Never knew that! So yeah, those 2 are acceptable to us. We don't usually swear but because of our multi-racial community, I'm more partial to making sure she doesn't say something racist or discriminative. Eg. Apoonehneh is a mostly innocent, but still a little racist term to call an Indian. She thinks it's quite funny to say it but she doesn't really know what it actually indicates to.

One Mother Hen said…
OMG, this made me laugh, I'm a sunshiner too, and I swear way too much. On a recent trip to the beach, my daughter was successfully telling seagulls to piss off. woops. Last week I said 'arse' instead of bum in front of the little kids next door. woops. Oh well, Izzy doesn't go to childcare, and mix with the kids there, so I feel I am doing their job in teaching my kids to say naughty words. At least she wont be the odd one out when she gets to kindy ;P
12 October 2012 at 10:43

Bright Shiny Apples said…
I swear alot.. I thought I had it curbed.. but when my lil miss hurt her toe in the door.. she goes oh shit..

MultipleMum said…
I *try*not to swear in front of the kids. Not sure I am all that successful. We call them 'adult' words, just like coke and coffee are adult drinks. Seems to cover a multitude of slips x
12 October 2012 at 12:40

Me said…
I volunteer as a Motorsport Racing Official an it's done wonders for my language but not in the way you'd think.

Unknown said…
Ok time to own up. Lol. I swear a lot. I try not to or actually, i dont even really try. My husband hates it but he allows himself to swear Fuckit! when he hurts himself or something. I have a 6yo and 8mth olf. Sometimes the 6yo hears us swearing but mostly we only do it when shes not around. Ps i have a giveaway on my blog! makemeupmandy.com
12 October 2012 at 15:12

Kyla @ Three Quarters Full said…
I swear an awful lot, we have a little parrot though and every since he said 'oh ffs' with the exact correct inflection after hearing we couldn't go to the beach because of rain and told hubby he was being a twat I've been trying to curb my language. I use "oh fudgecakes" nowdays... well some of the time anyhow. I've got to watch the ranting too, especially while driving - it's not easy!

Kel said…
My personal preference is Holy Guacamole, but I think that's too much to ask of the little ones! Forgot to mention, I've also heard your driving rants and your 'sunshine' hehehe, made me giggle!
12 October 2012 at 23:04

Me said…
We didn't swear in front of K - mind you A doesn't swear at all and I know that if I really want to p*ss him off I just throw in a few "F" words and that sends him up the wall - his retort ALWAYS is "You are more educated than that and can use better words than that" - it doesnt' stop me from doing it as there is some power in that word !
Have the best day !
Me
15 October 2012 at 11:37

Kylie Purtell said…
We have the same belief system when it comes to swearing hun - in fact - as I've progressed through kidlets, I seem to swear out loud WAY more than I used to - hence No.1 - saying "No I won't fucking do that" OOPS - talk about a walk-up call - Love this post and you for having a lovely gutter mouth :)
25 July 2013 at 21:38

Kylie Purtell said…
I always tell my kids that I don't care if they swear but there are much more interesting words that they could use - and then we have a play around with ridiculous alternatives and they seem to forget about the swear words (which they were probably just saying for shock value/attention). It all works really well and I feel like mother of the year until I actually belt my own toe and scream FAAAARRRKKK! :) They call me on it now - every time.
26 July 2013 at 10:45

Kylie Purtell said…
I fucking love swearing and generally the people I like the most are also fellow swear bears. I do try and keep a fucking lid on things round the kids. I like to use "shings!" instead of "shit!" if that helps. You could add that to your non swearing ARSE-nal. Hahahaaa!
26 July 2013 at 19:13

Kylie Purtell said…
The car is the worst place for me. Unfortunately that's where the kids usually pick it up. As long as they know not to swear in public.
27 July 2013 at 07:26

Kylie Purtell said…
I swear like a trooper. No word is off limits for me. We have taught Mr 4 that they are *mummy daddy words* and so far he has only sworn a handful of times (always in context so I'll admit I was a little proud). I wrote a post not long ago about a woman at the playground being horrified that she had resorted to swearing at her child. What did she say you ask? She told her dear child (a ten year old I must add) to 'please shut up'. So we definitely had different definitions of what swearing is and it's safe to say she wasn't one of those met at the park new friends.
27 July 2013 at 16:02

Kylie Purtell said…
Car, work, shopping centre, home - they are the standard swearing destinations for me. Nothing off limits. Just go for it, I say. It usually makes me feel better :)
27 July 2013 at 19:49